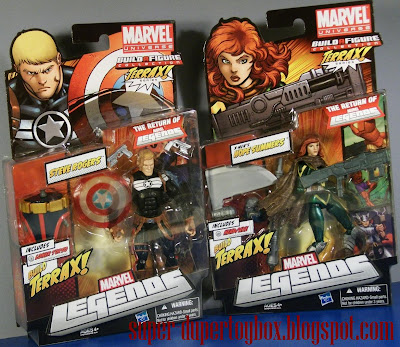 A couple weeks ago I heard the Hasbro Marvel Legends had arrived at Target, and though the toy aisle had not been reset, I knew the DPCI # and had the help fetch me a box from the back room  :D  Unbelieveably, all the variants were present in the said case- two blue Iron Men, the red-flamed Ghost Rider, and this Commander Steve Rogers! Through the grapevine I've come to realize that for whatever reason, variants are easy to find in this first wave of the long anticipated return of Marvel Legends. I like the way these are packaged- they're splashy & fun looking, though the artwork of the characters isn't my cup of tea, and I'm not a huge fan of the Legends logo either. 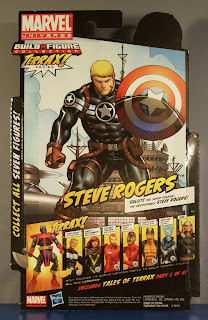 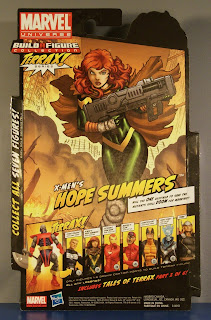 First up, and the one I was most interested in, Commander Rogers! I was thrilled to have stumbled apon the variant of this figure featuring the clear shield. I've yet to read any Marvel books with Steve Rogers in this uniform sporting his photon shield, Bucky Barnes carrying both Rogers' mantle as Captain America and his trusty shield. The shield can fit into the hole in his back or onto his arm using a peg and clip device. This works well, but coulsd be more easily broken that a couple elastic bands like some of the other Captain America figures I've seen. 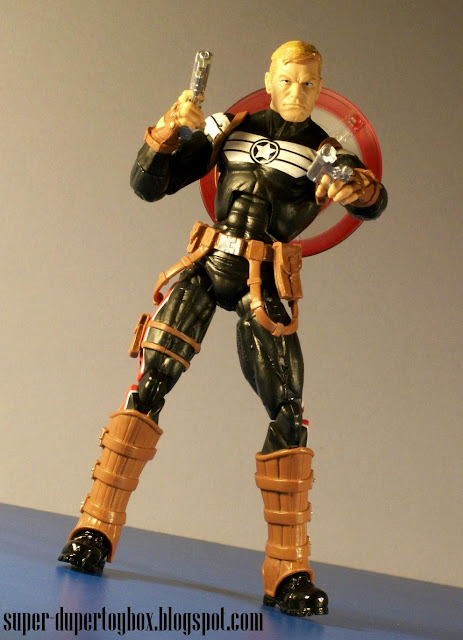 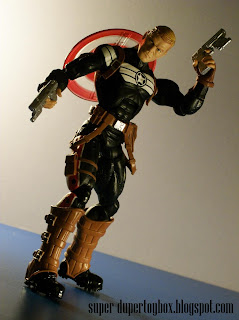 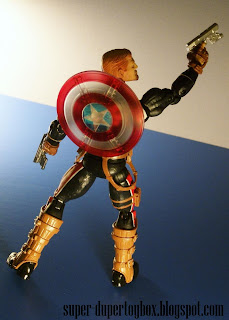 Everyone reviewing this variant has said his suit is black, but it looks like a really dark navy blue that probably looks black next to the his counterpart which has a lighter blue wash/highlights- you can tell by comparing his very black, shiny boots. Commander Rogers' shinguards, belts, and gloves are lighter in tone than the other version as well. 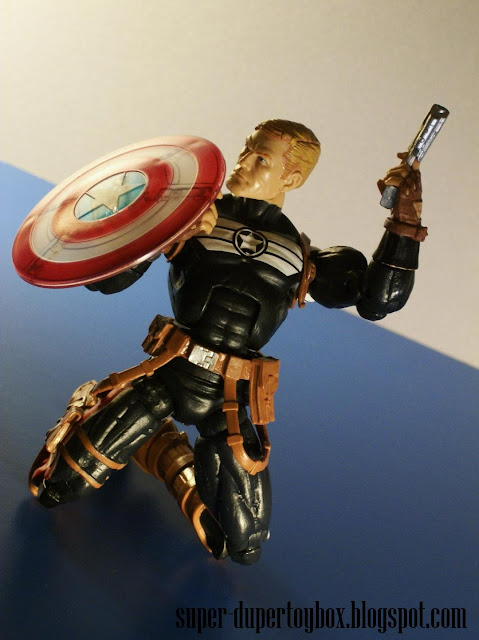 This action figure has some pretty great articulation, but I found getting him to stand in any variety of poses a mild challenge. Commander Rogers has ball and hinge shoulders, bicep swivel, double jointed elbows and knees, forearm and thigh swivel, a generous abdominal crunch and full waist swivel, those ball hinge hips that are sometimes cranky, and swivel/hinge ankles. He also has a ball and hinge neck with outstanding range, but like several of the Marvel Legends I have, Commander Rogers would benefit from a stand. That said, I'm a patient and masterful action figure poser   :D 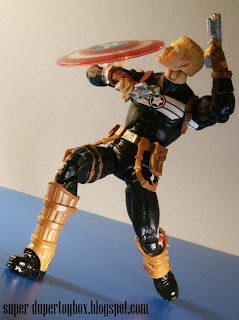 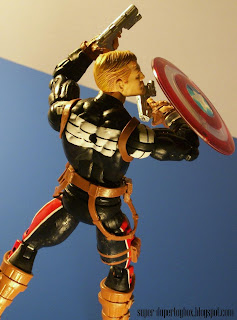 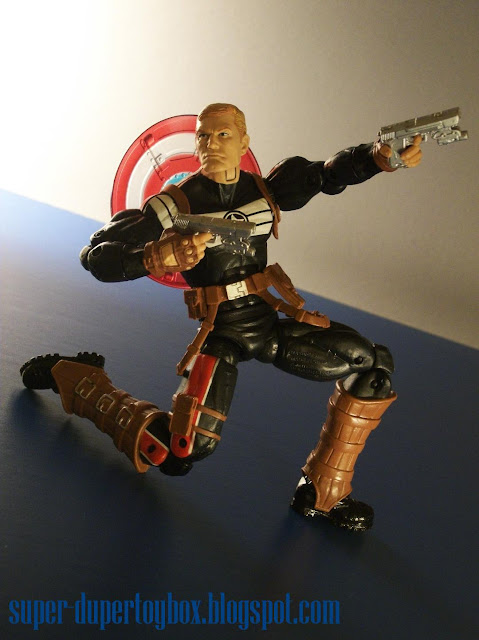 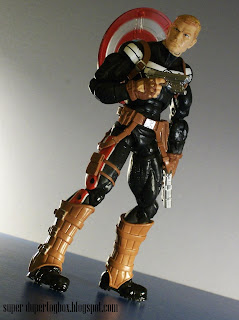 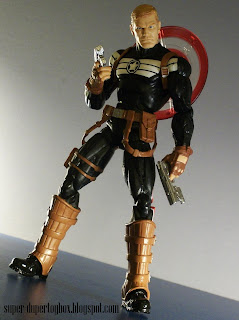 The laser-sighted pistols Commander Rogers came with fit pretty well into his left hand, his forefingers clawed to fit in the triggerguard, but the right is a little loose. Like more than one dork, I feel a couple holsters and perhaps a paint wash for these accessories would have been cool, but I do like the silver color. And why they gave this figure a swivel in they forearms instead of at the gloves is beyond me- the skin tone below the paint can be seen arond the cut. 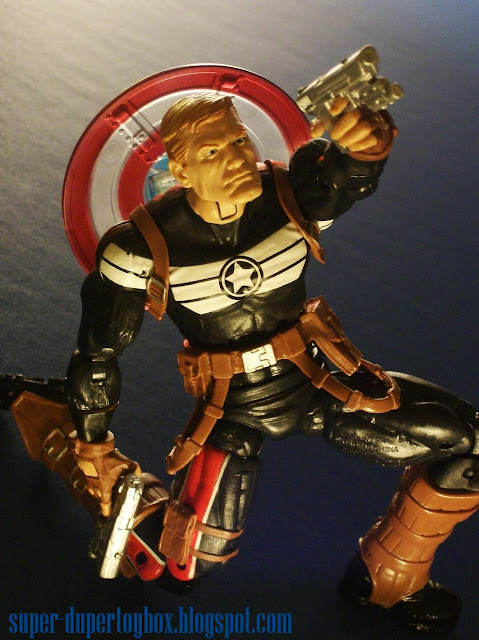 I was supremely impressed with the 3 3/4" Marvel Universe Commander Rogers by Hasbro last Fall, who bears the remebmblannce of a young Robert Redford if you ask me. I wish they'd put the stars on the Legends version like the MU version, and wish they'd given the MU version a photon shield like the Legends variant, and am unsure why they didn't do either. What a great oppurtunity for one of my favorite activities here at the Super-DuperToyBox, BIGTOY/littletoy!   :D 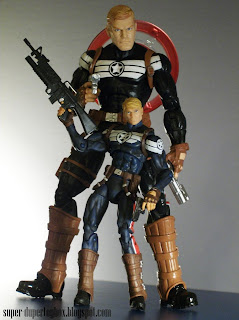 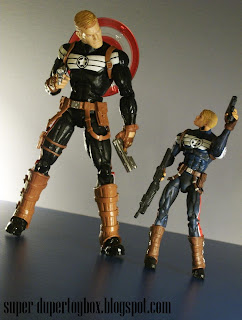 While I felt somewhat ho-hum about several of the characters in this 1st wave of the return of Marvel Legends, I knew I wanted to pick up a Hope Summers too.  While I know almost nothing about the "Mutant Messiah", I've recently transformed into a rabid Cable fan after reading so much early X-Force stuff, and have yet to read the Cable: Homecoming hardback I picked up at Comic Headquarters in December, which features Hope. That might take awhile as I'm STILL catching up on X-Force and should probably read Messiah Complex first, but I digress! 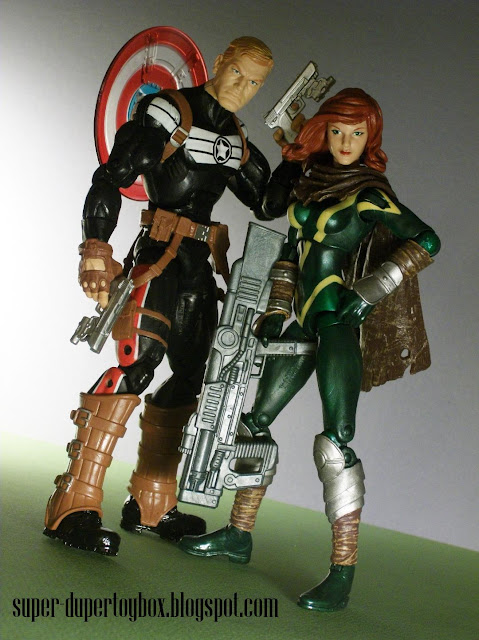 Several plastic junkies have said this may be the the same absurdly large gun Marvel Legends Forge came with, but this little girl doesn't like holding it. Like Commander Rogers, Hope has a difficult time standing, further exacerbated by somewhat loose knee joints and a heavy cape on a waif buck. And I'm certain warpage due to the packaging has occured in her right leg, perhaps contributing to Hope's issues remaining upright. I've read opposite reports on some reviews of Hope,  most of which feature several pictures of her in virtually one pose, so... Maybe it was an off night for me? Well she fell over on the shelf while I was writing this, so there ya go. She can do a kneel on one leg with her gun, which is more stable. 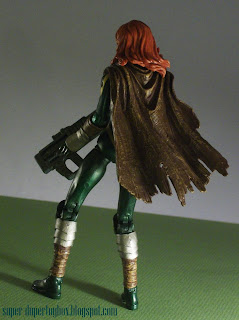 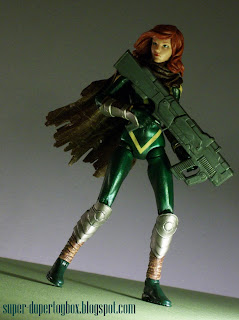 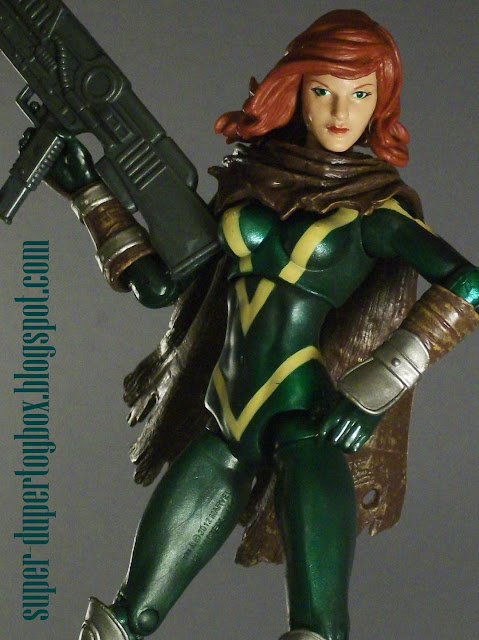 Complaints aside, Hope looks pretty great! The worn texture on her poncho is well detailed, matching the wrappings on her shinguards.  Her body is molded in semi-metallic evergreen I really like. Hope's arm guards can be moved, but still manage to get in the way of her gun handling. I find her little face to be pretty, though some have described it as plain. Is it her skin tone? I think she's cute :)  Her hair sculpt is a nice windblown look, but hinders her articulation considerably, as expected. Speaking of which,her articulation is similar to Commander Rogers', except she has a swivel/hinge elbow as opposed to a bicep swivel, and a swivel/hinge wrist what would help her hold the gun better if it only fit better in her hands! Her abdominal joint is different too, which appears to be some sort of  limited hinge/swivel or ball & socket. 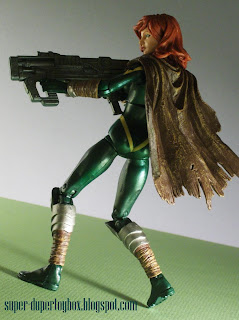 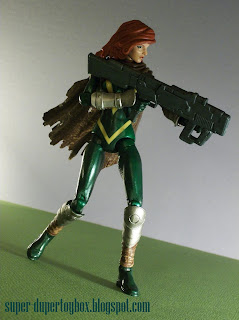 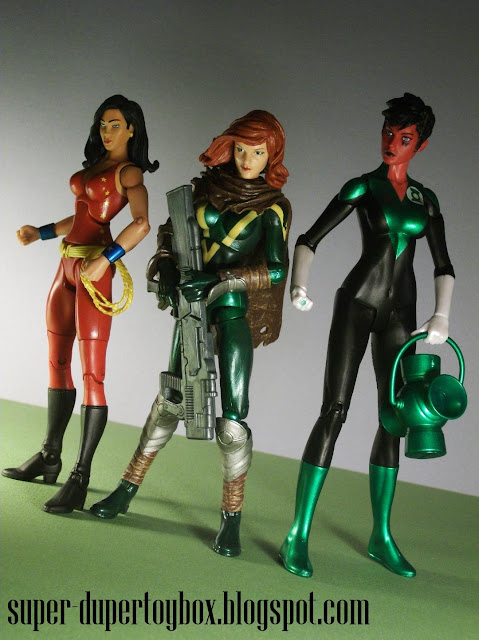 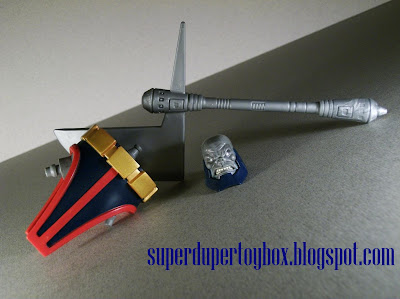 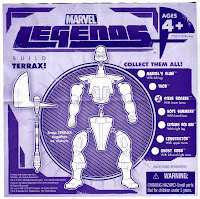 Commander Rogers came with the crotch of this wave's BAF, Terrax, and Hope included his head and weapon, the latter in two parts. This looks to be a killer figure, but I doubt somehow I'll pick up the entire wave. I might get the Extremis Iron Man & Modern Thor, but that'll probably be it.  I realize this is a big moment for hardcore Marvel Legends fans, but I'll cherry-pick this line like nearly every other I get into. These were $14.99 at Target, which some mind find a bargain compared to the $18.00 that Mattel asks for DCUCs now, but it still seems like a damn lot to me!

Commander Rogers and Hope Summers with my Lord of Asgard Thor... 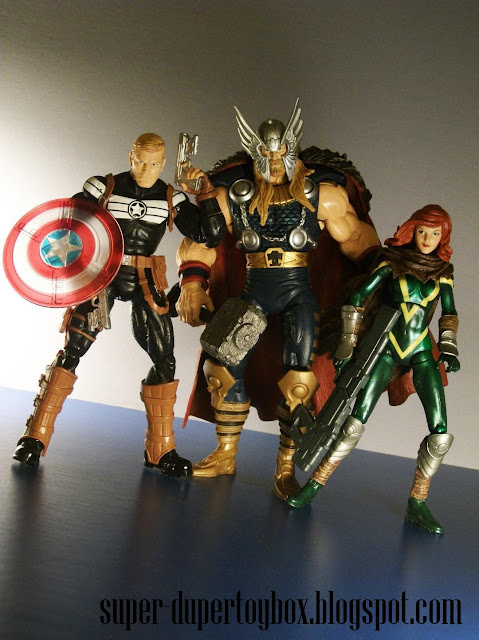 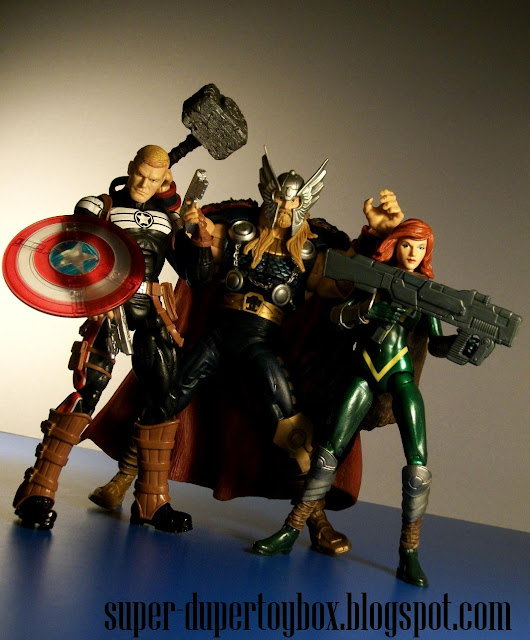 *See MarvelLegends.Net for the Legends visual checklist!
More Later- Make It FUN!
Posted by Super-Duper ToyBox at 12:51 AM