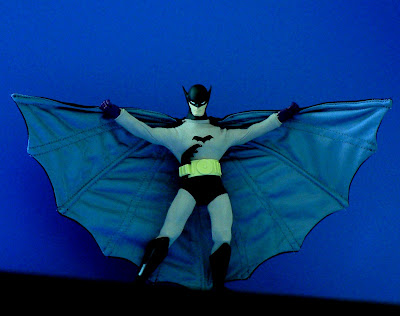 In commemoration of the recent "Battle For the Cowl" between ChunkyB from Eclectorama and Reis from Hey!Look at my toys!, I wanted to share a recent purchase I made. I knew nothing about this mysterious 9 inch "Bob Kane" Batman by Hasbro until I saw it among ChunkyB's troops lined up for the Battle, and there he was- my Batman! Reis also had this toy and said it originally came with a cool book, which I'd love to see, and when I found an entry about this figure on Action Figure Insider it said that he also came with a reprint of the first edition of Batman comics (though this was not Batman's first appearance- he first appeared in Detective Comics #27). 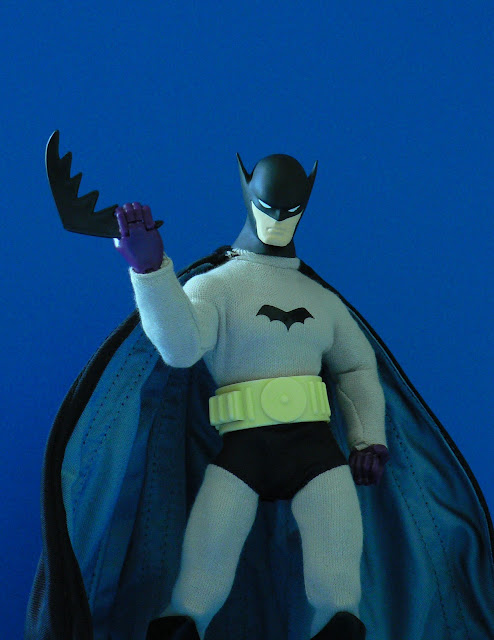 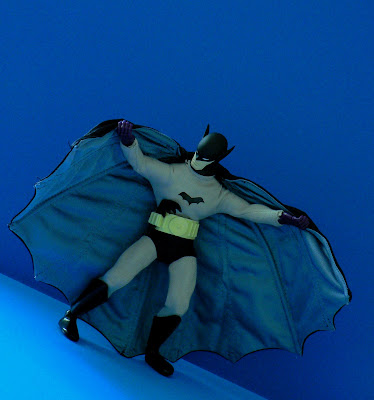 Designed after Bob Kane's Golden Age Batman, this retro-styled figure spoke to both my great affection for the Caped Crusader as well as my nostalgia for the Mego World's Greatest Heroes line from the 70's that featured cloth outfits. The toy is very authentic to the early illustrations of Batman, and features a bendable wire inside the outer edges of the thick cape, enabling one to display the hero with his cape spread out, like the wings of a bat- this was a great idea. The figure's hands hinge at the knuckles, allowing him to grip his Bat-a-rang, an articulation not present in the toys of my child... I'm so glad the folks at Hasbro gave Bats this accessory, my Mattel Retro Action Batman didn't come with a Bat-a-rang. What a FUN toy this is! 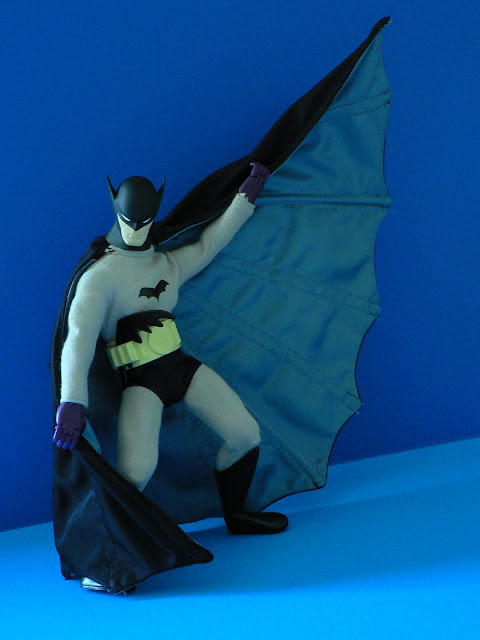 Congratulations ChunkyBalboa on your stunning show of power in the "Battle For the Cowl", and hats-off to Reis for your own formidable flex of might in the contest. You were both good sports, entertaining to watch, and educational in the pursuit of the origins of my mysterious new acquisition. 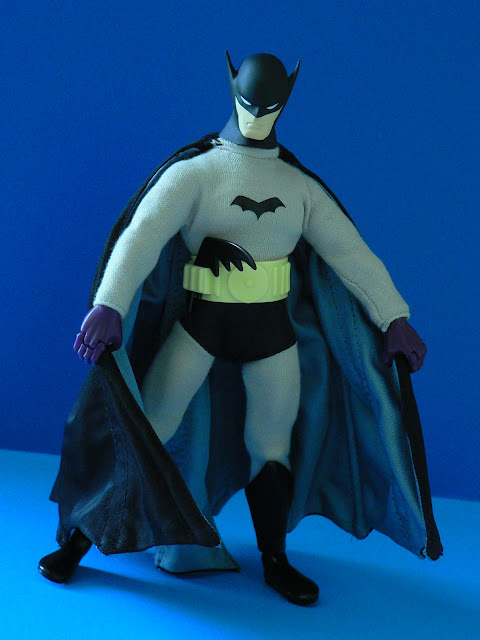 -Cover of Detective Comics #27 at Wikipedia, featuring the shadowy figure this toy was modeled after!
-Review of 6 1/2" DC Direct "First Appearance" Batman figure at OAFE- very cool! Another review of that Batman with great comparison pictures at MWCToys.com!
-Custom "Mego-styled" 1939 Batman at BatBlog! Nice job!
Posted by Super-Duper ToyBox at 10:40 PM