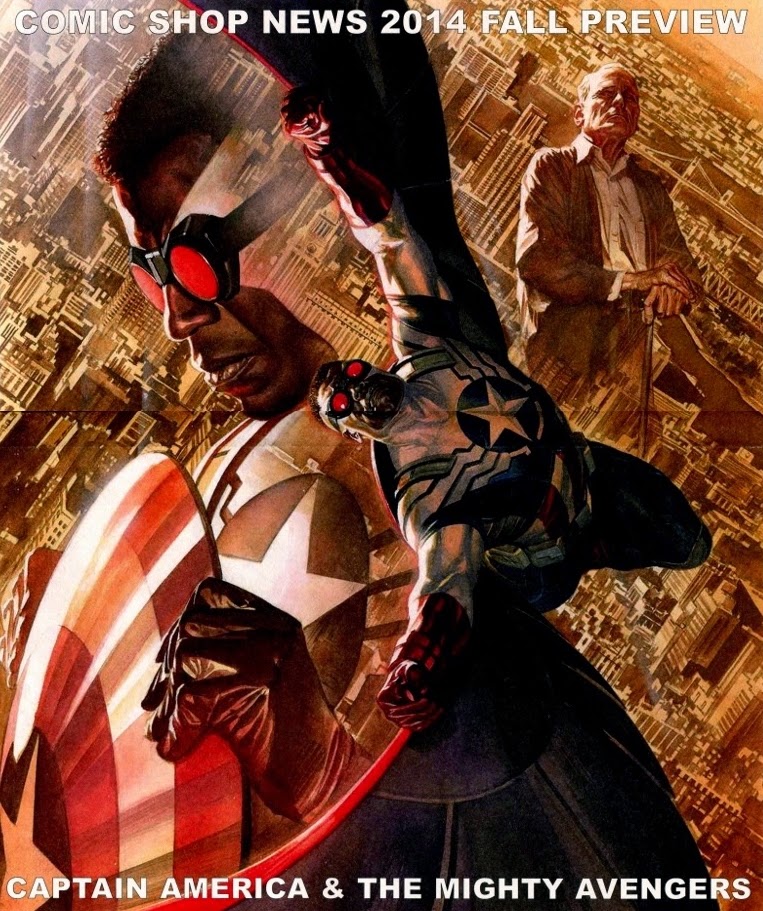 I thrilled at the recent and fantastic Comic Shop News 2014 Fall Preview, featuring Sam Wilson (formerly The Falcon) taking on Steve Roger's duties as Capt. America, According to Comic Shop News,  issue #25 of Captain America will detail the passing of the mantel, Captain America & the Mighty Avengers #1 will see Sam assemble the Avengers with a whole new mission statement, and All-New Captain America #1 will gather Cap's gallery of rogues united by Hydra to attempt the takedown of this yet untested Capt. America & Nomad! I stopped reading recent Captain America title after he escaped Arnim Zola & Dimension Z, but must assume Ian will continue his role as Nomad, assumed after having lost contact with adoptive father Steve Rogers in the tumultuous getaway. I don't know if you are one comfortable with change, but this all looks very interesting to me ...!
More Later- Make It FUN!
Posted by Super-Duper ToyBox at 7:03 PM 2 comments: 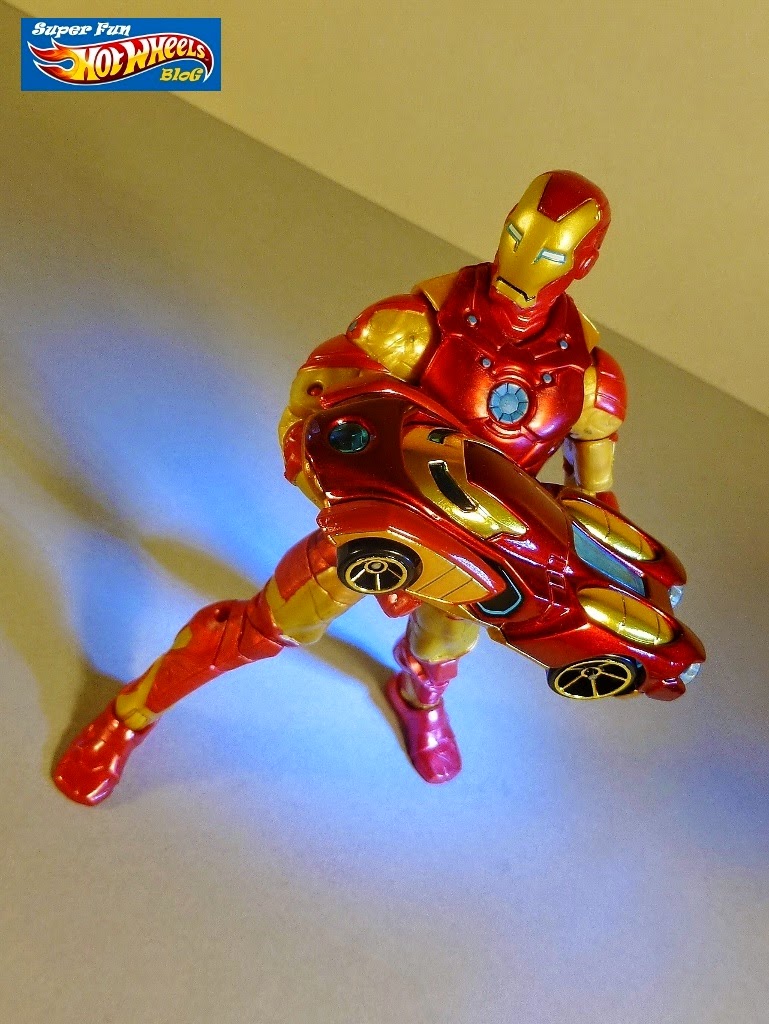 And now for a little crossover action, take a spin over to our little brother blog, Super Fun Hot Wheels, and check out the Hot Wheels Iron Man car! I launched this blog back in June, and have had a fast time exploring the world of diecast cars- I think you will enjoy it as well....   ==O{+==}>O
Make It FAST- Make It FUN!
Posted by Super-Duper ToyBox at 11:35 AM 3 comments: 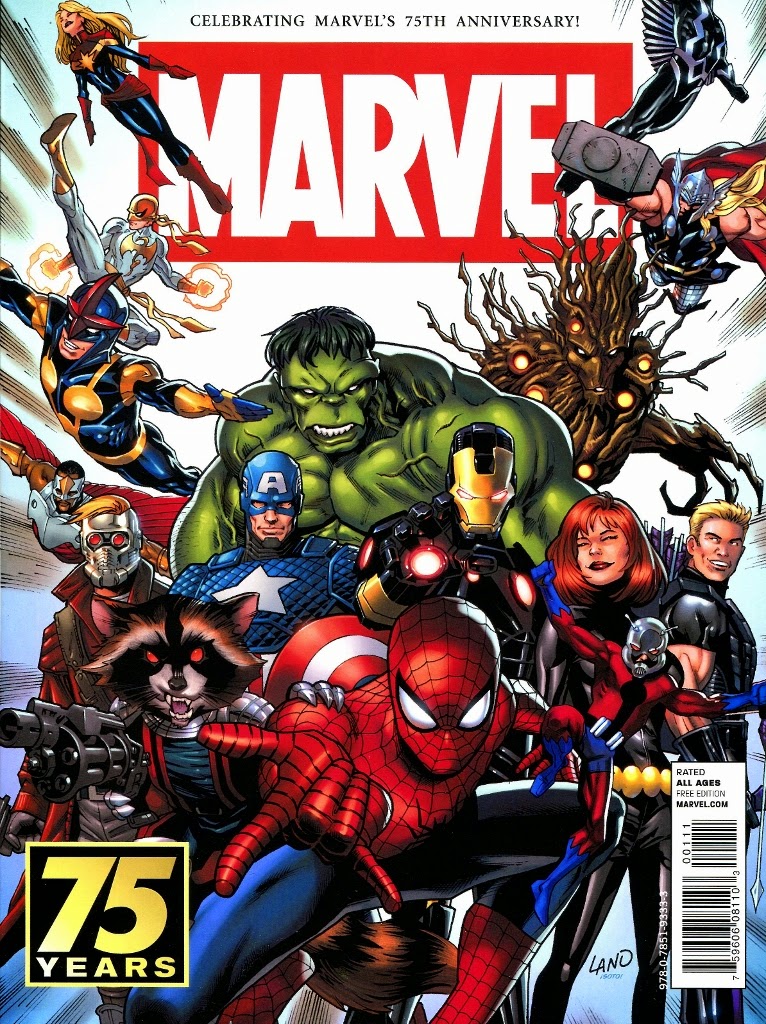 I had to share this very cool Marvel 75th Anniversary Magazine I picked up for FREE last Wednesday at the comic shop. Sure, every other page was an ad for Marvel swag or congratulatory message from licensing company that manufactures Marvel swag, but there were several other aspects about this handsomely produced, full magazine format that made it like a gift. A recap of the major crossover events is to promote trade paperback collection sales, but was a nice checklist to see what I've read so far, even if lean on the details. And in the pages before the "Event Horizon" article, a fairly generous fan-elected Top 75 Marvel Comics checklist was printed... 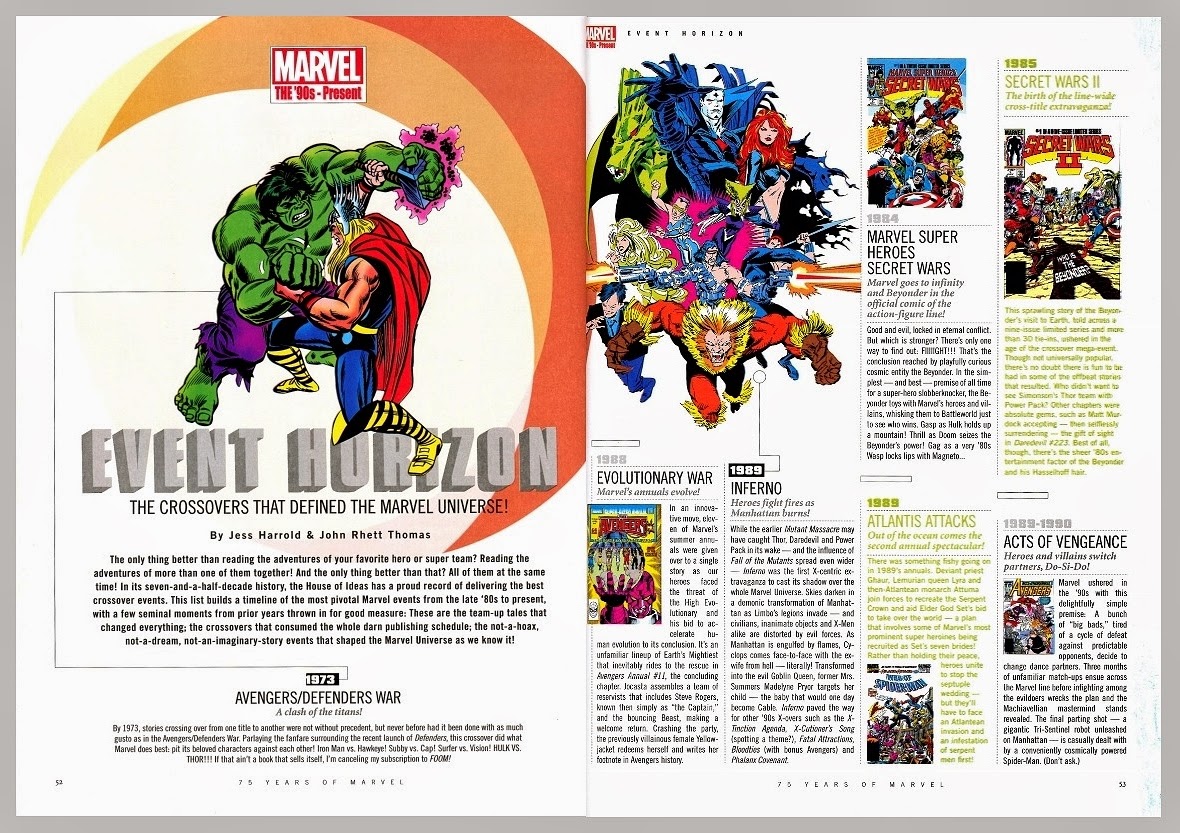 While I'm old enough to remember getting Marvel Mego dolls, it's easy to forget that some younger readers might not be as well read on the subject as I. The "Marvel Legend Toys" article also touched on the earlier Marx figures, the Secret Wars figures of the '80s, and into Marvel Legends and Infinity Series figures produced today. We also get a play-by-play of Marvel Studios development of the franchise onto the silver screen, and the company's foray into the digital age and comics online. 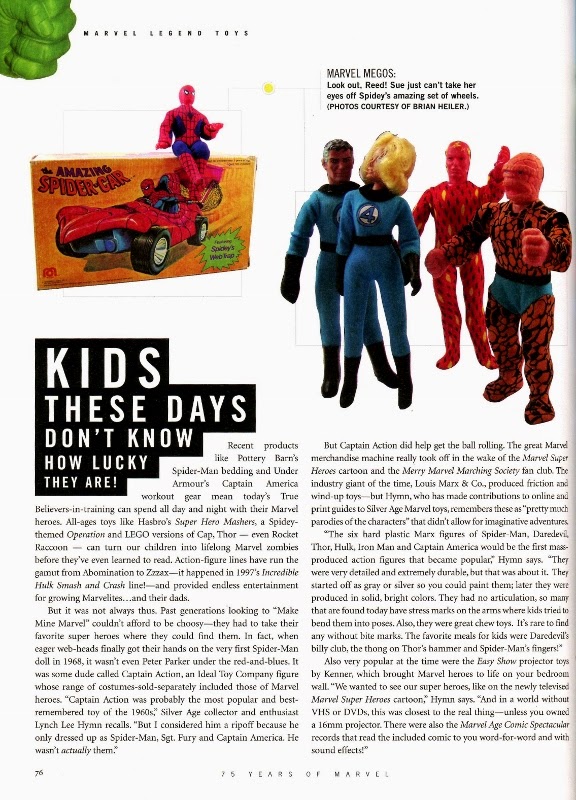 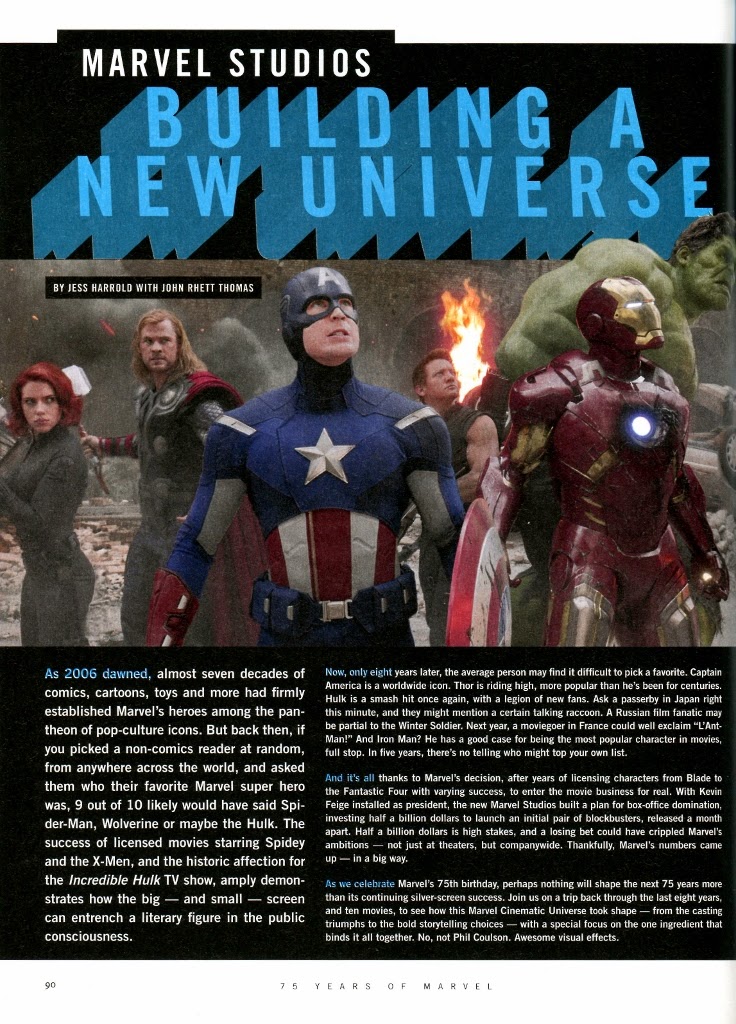 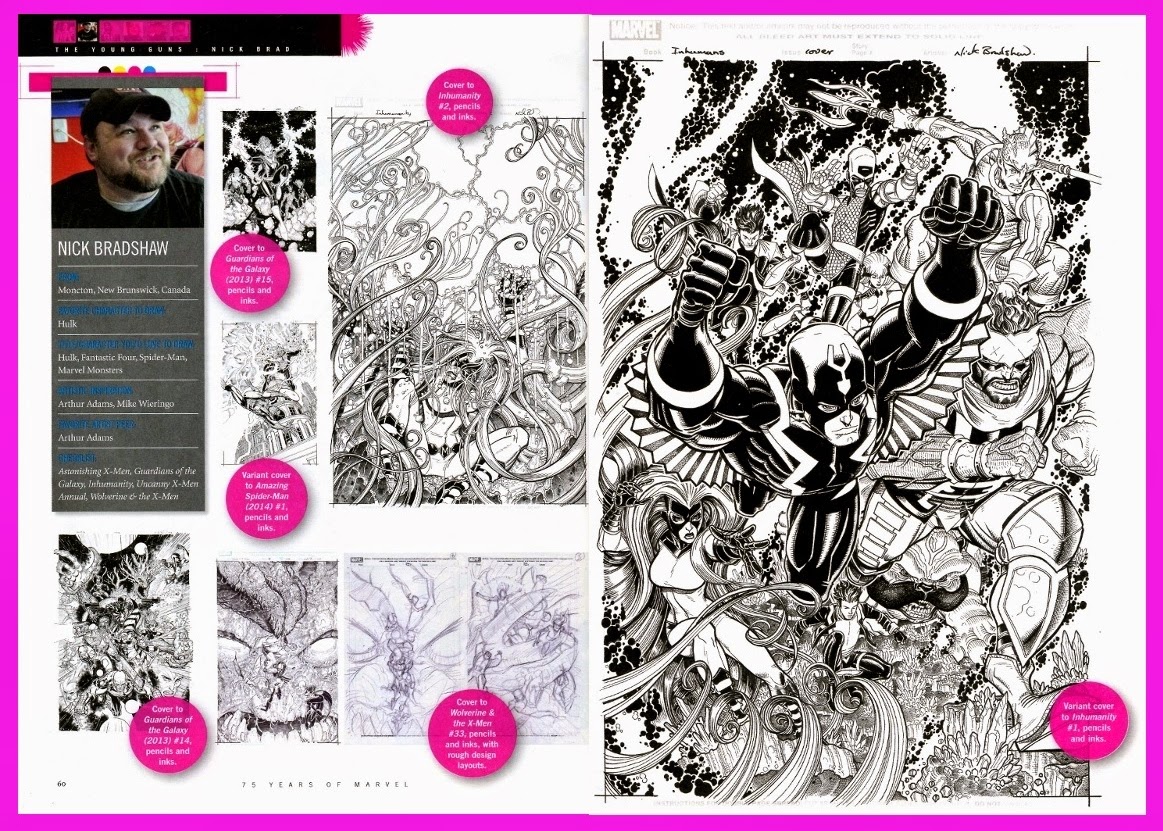 And throughout most of the magazine, we are given a decently written, running tour of the events through the decades that shaped Marvel into the entertainment giant it is today. Stan Lee gives a candid interview about the early decades here, and Marvel artist Walt Simonson talks about working on the very successful run of Thor during the '80s. Again, it's easy to forget that some kids may be hungrily consuming this history for the first time. I was thoroughly impressed by this quality publication, and must extend my thanks to Marvel for keeping it classy! 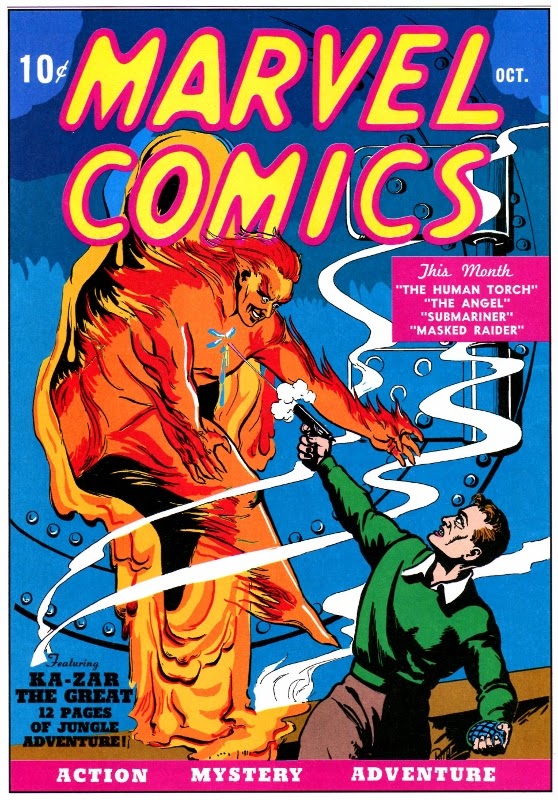 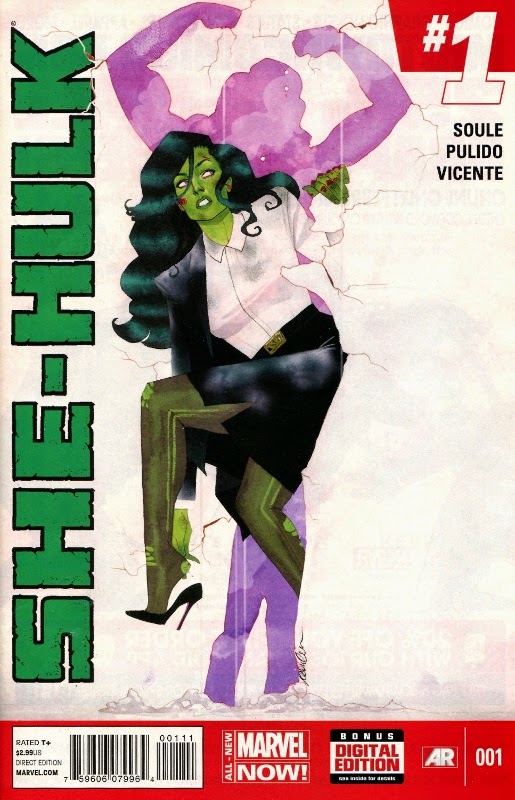 Yes, I just wrote a "Currently Reading" post, but She-Hulk has occupied enough of my time and attention in the last many months that she really needs her own post. Our relationship *ahem* deepened when Jennifer Walters became part of the FF team last year, along with Ant-Man, Medusa, and Miss Thing in Matt Fraction & Mike Allred's awesome Marvel NOW! title. The creative team really put a lot of character development into Jennifer, whose power was matched by sensitivity toward and concern for the team and the children the Fantastic Four left in their care. I'm a huge fan of Allred's artwork, which served the often humorous moment very well with it's graphic, cartoony style. When She-Hulk got her own title relaunched under the Marvel NOW! imprint in February of 2014, I had to pick up a few issues... 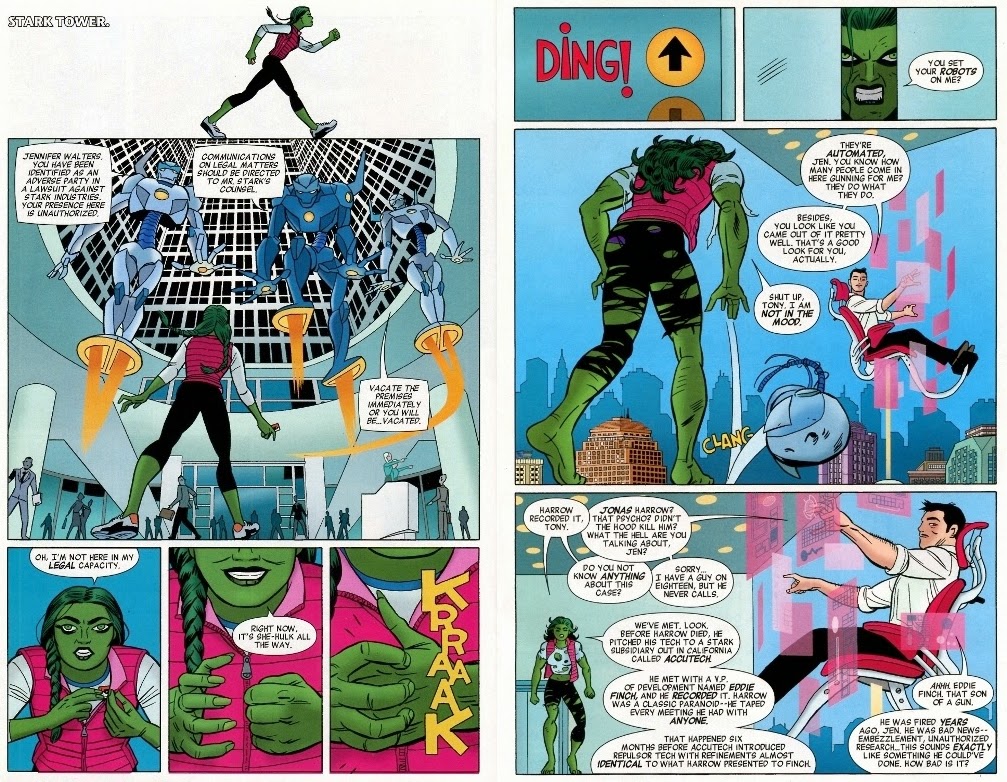 I loved the stories Charles Soule was telling, using other characters from the Marvel Universe to help Jennifer out, stand in her way, or sometimes both. Hellcat, Ant-Man, Tony Stark, Daredevil, Dr. Doom, and even an aged Capt. America all make appearances within the first seven issues! I look forward to reading more... 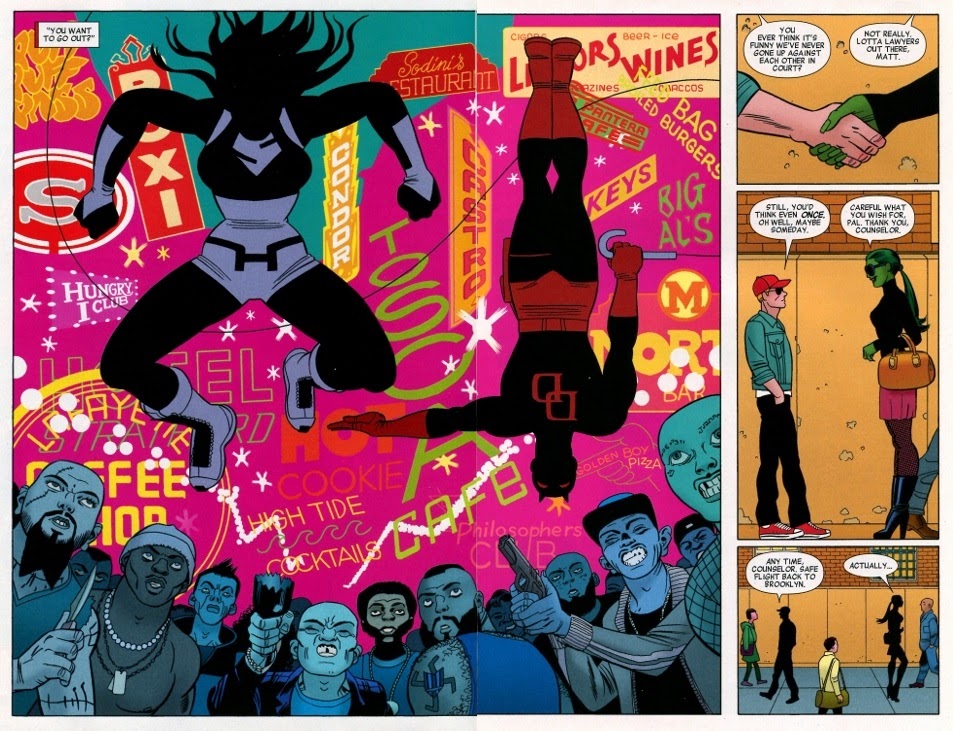 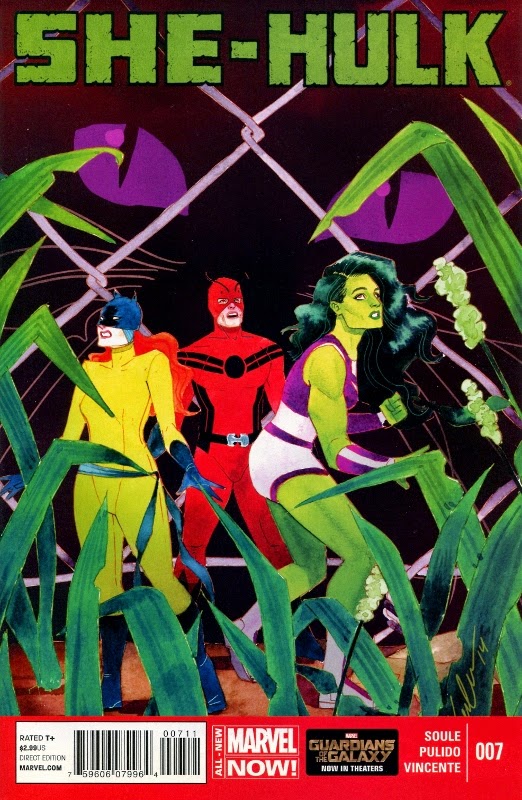 But even before FF and the new She-Hulk title, I remember reading issue #7 of Avenging Spider-Man, where She-Hulk helps Spider-Man defeat Egyptian cat goddess Bastet. Jennifer's personality seemed slightly less tolerant of Spidey's wisecracking antics here, and is closer to Dan Slott's run on the character but some accounts, but her quips and comebacks are intact, as is her steely determination. I loved Avenging Spider-Man for it's cast of beloved co-stars, and She-Hulk was a great fit! Below, the heroic duo confront their foe in front of an Egyptian artifacts exhibit opening that Jennifer Walter's law firm is sponsoring! Hilarity ensues, courtesy of your friendly neighborhood Spider-Man... 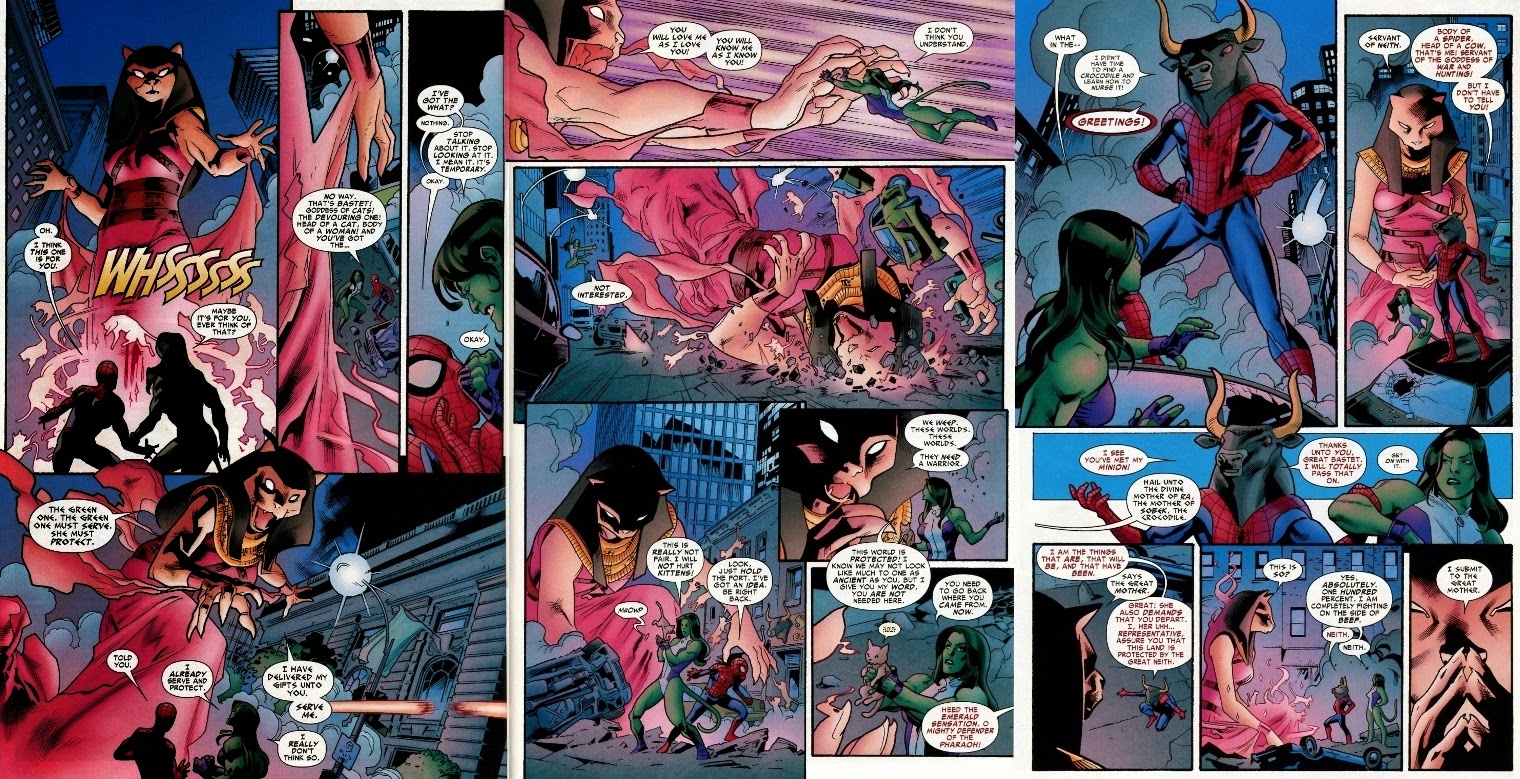 This past spring I read The Sensational She-Hulk TPB, containing the first eight issues with  John Byrne's take on the character. Jennifer is aware of being herself starring in a comic, breaking the "fourth wall" between reader and character, and adding whimsy and surrealism. I love the way Byrne drew She-Hulk, and the whole book brought the warmth of nostalgia for the '80s back for me. Spider-Man makes an appearance in issue #3, which made it all the more fun having read the aforementioned Avenging Spider-Man #7. I haven't read any of Dan Slott's later She-Hulk run, and not much more of Byrne's Fantastic Four with She-Hulk as a member, but I would be interested now. What's your favorite era or story of our beloved, green-skinned heroine? 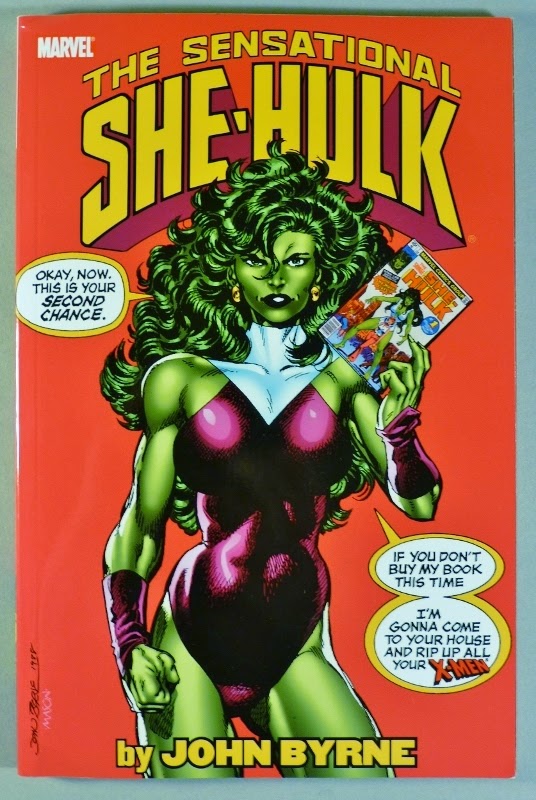 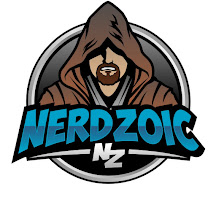