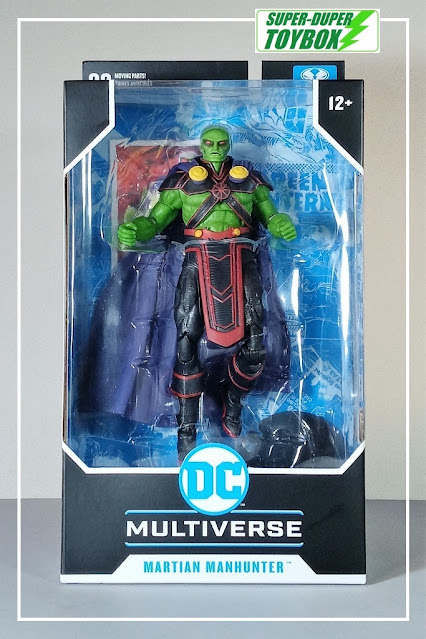 We don't get as many Martian Manhunter figures as we do other members of the Justice League, but he's been a favorite DC character of mine for some years now. Created by Joseph Samachson and artist Joe Verta in 1955, J'onn J'onnz is often compared to the other last surviving orphan of an alien race and is portrayed as equal in power to Superman. 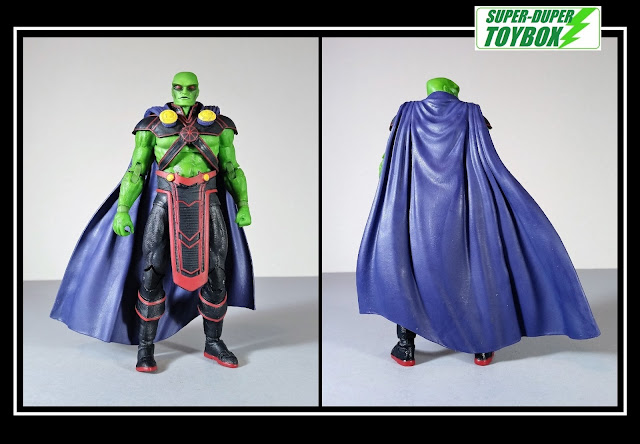 I haven't read any of the more recent Vol. 4 of Martian Manhunter, nor the Rebirth material, but I do like this look- the portrait is very cartoony, much like what little of the art I've seen. The color palette is darker, but the collared chest harness and oversized cape clasps are familiar elements. A mature update to the New 52 look, with a nice swoosh to the cape and leathery texture to the black outfit. What we wanted with this figure was a flight stand and an alternate alien portrait, but I do like him quite a bit. 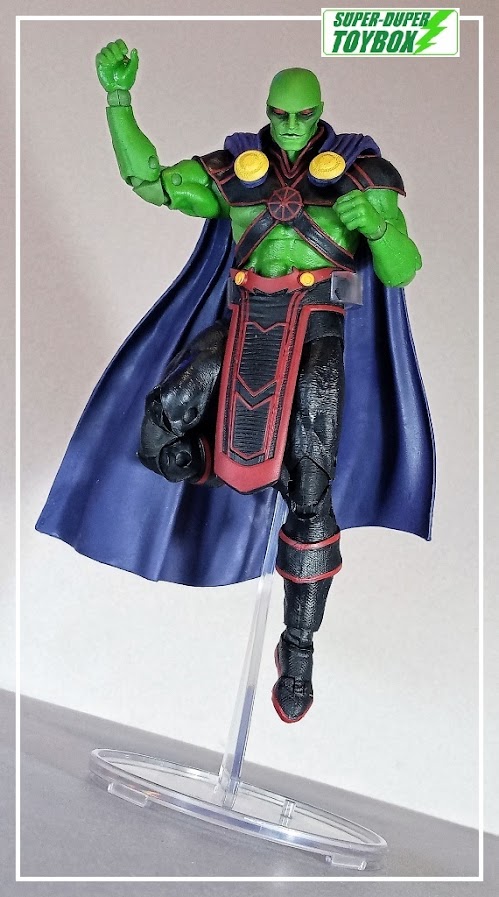 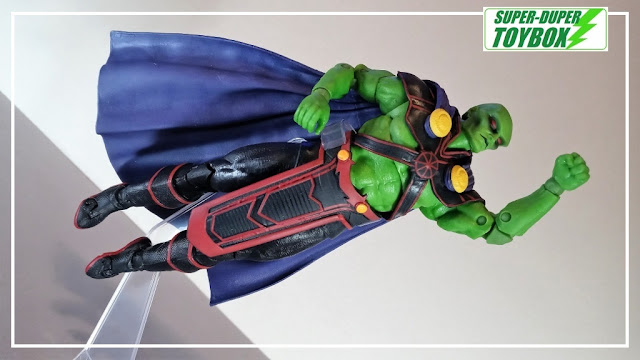 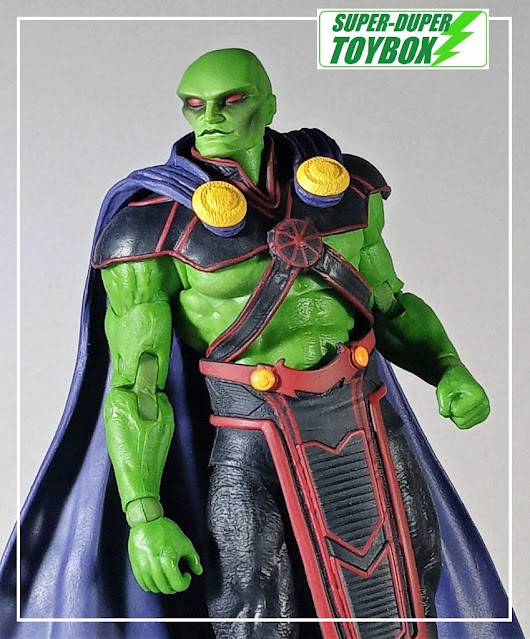 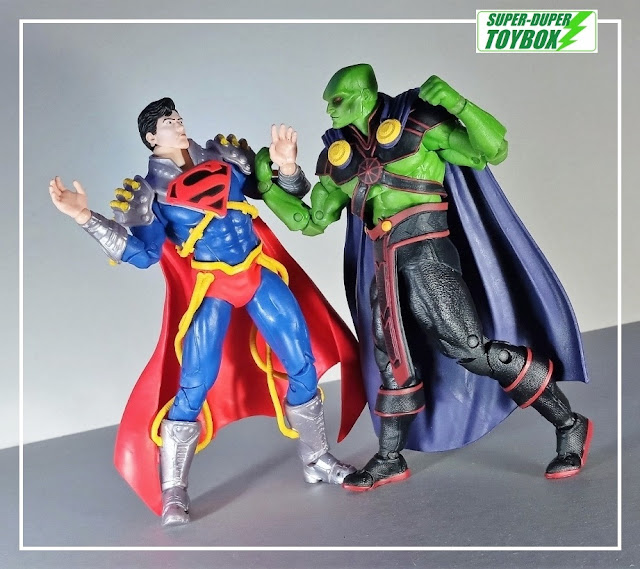 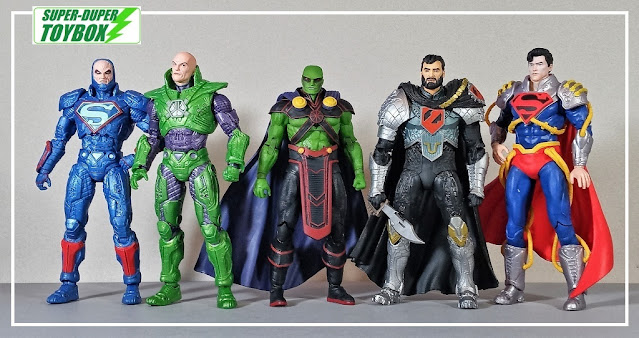 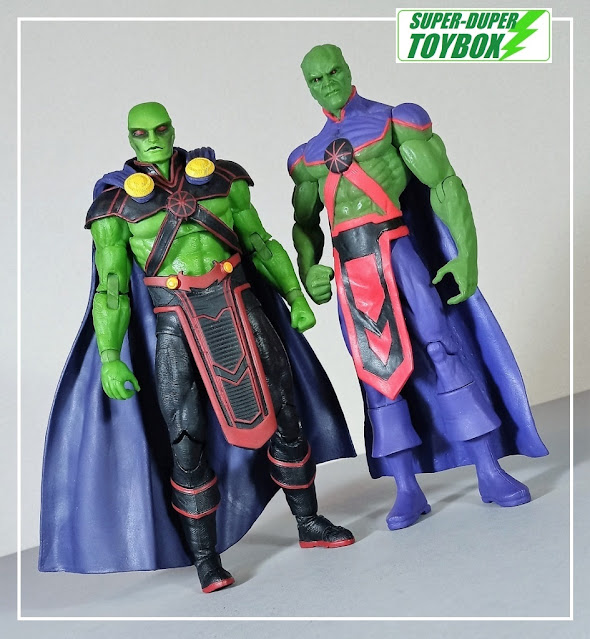 Visit The Idol Head of Diabolu, an online Martian Manhunter blog!
Follow the Super-DuperToyBox on Instagram!
More Later- Make It FUN!
Posted by Super-Duper ToyBox at 12:55 AM No comments:


When Mego unexpectedly reappeared on the scene in 2018, I resisted at first, eventually picking up several of their 14" DC Comics heroes. Fast forward to 2021, Mego returns to form, releasing all new 8" DC Comics figures, like the halcyon days of their World's Greatest Heroes line of the '70s. I was seriously hooked after picking a few of these up, and eagerly await a few preorders, including a couple PX Previews Exclusive Mego figures.
The new head sculpts and outfits on these figures are top notch, distilling the essence of each character to its purest form. Mego didn't overcomplicate these updates, retaining the simple charm of all we love about their figures. In a word: classic.
Below, 12" DC Direct Robin, 8" Mego Robin, and 6" DC Universe Classics Robin...
I have a small assortment of pistols for 8" figures, acquired from Dr. Mego. None of the original World's Greatest Super Heroes or Villains had guns, but other Mego series like Planet of the Apes did.
Below, Mego Riddler and Joker with my Mattel 8" Retro-Action Two-Face. That 2010 series of Mego-inspired 8" action figures was at least partially responsible for my getting into action figure collecting as an adult and starting this blog...
Below, 14" Mego Joker, 8" Joker, and 6" Mattel DC Universe Classics Joker...
With my Mego Batman finally paired with his old crime-fighting chum, Robin the Boy Wonder,
the streets of Gotham can finally be safe from villains like the Riddler!
Below, the Dynamic Duo with Mego Flash and Green Lantern ....

The legacy of the '66 Batman TV show, and featured George Barris designed Batmobile will forever be a nostalgia trigger for me, having watched years of the syndicated episodes throughout my youth. I had a Mego Batmobile exactly like this in the '70s, that I could push my Mego Batman and Robin around in- they looked like the figures pictured in the box, also replica reissues by Figures Toy Company. 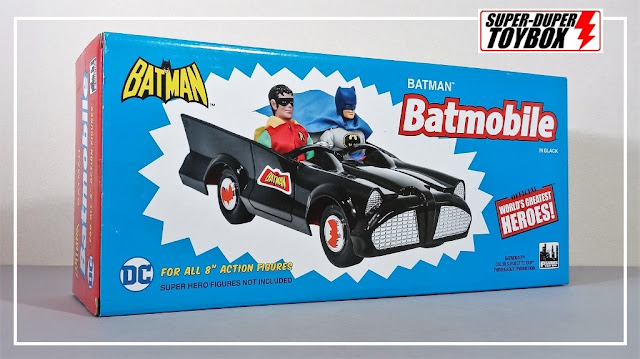 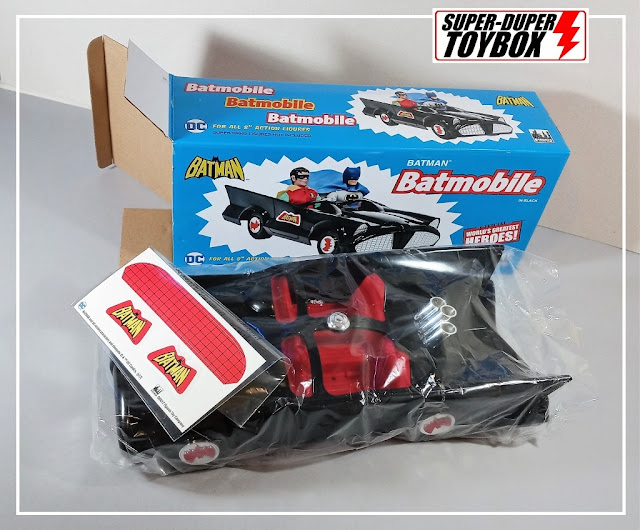 My new Mego Batman and Robin will be driving the Figures Toy Company Mego Batmobile around. I don't remember if the original Batmobile the same size as this release was, but the modern 8" Mego figures do fit, albeit tightly. The car is of unremarkable construction, like the original, but more than sturdy enough for play or display. Three stickers were included to complete the look, one a rear grill pattern, and two cheesy Batman stickers for the door ... 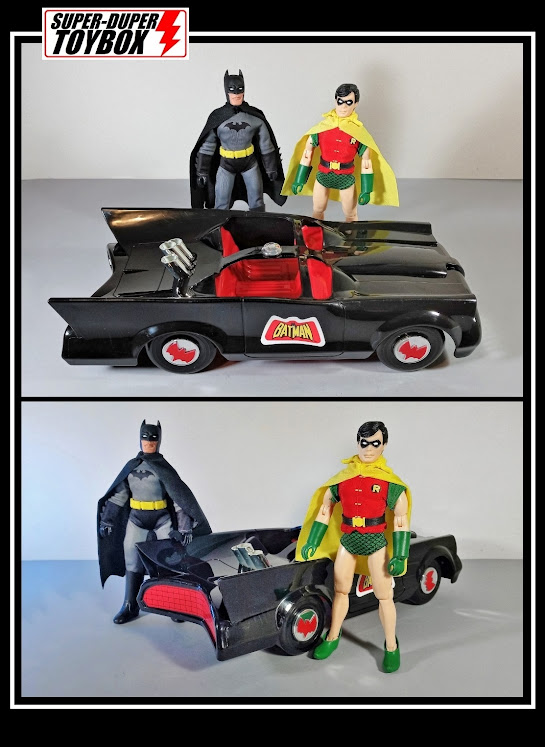 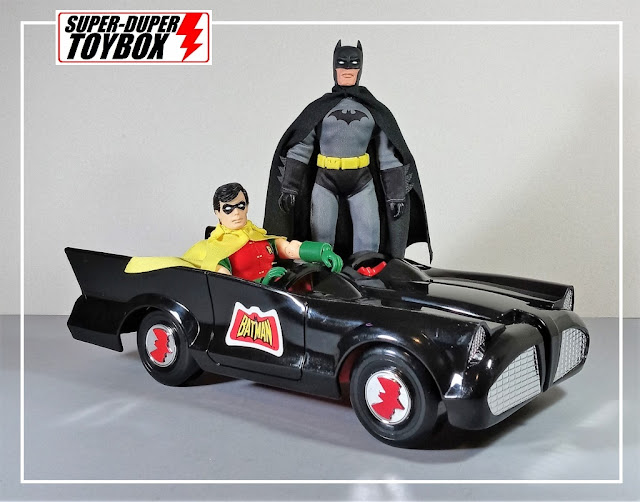 The charm of having a Mego Batmobile to go with my new Mego Batman and Robin was just too much to resist this fantastic replica any longer. While I got mine at a discount, these Figures Toy Co. Batmobiles usually run about $60.00- far more than the $6.95 in 1974, but a somewhat expensive item when adjusted for inflation. Regardless, a joy to have that is now produced in black, blue, and red -with matching Batcycles!
Below, Mego Batmobile with a couple 1:64 scale Hot Wheels '66 Batmobiles and 1:50 scale Hot Wheels '66 Batmobile. This George Barris Batmobile design really stuck with the sixties TV show in heavy syndication throughout the '70s and on to this very day. Visit the Mego Museum online! 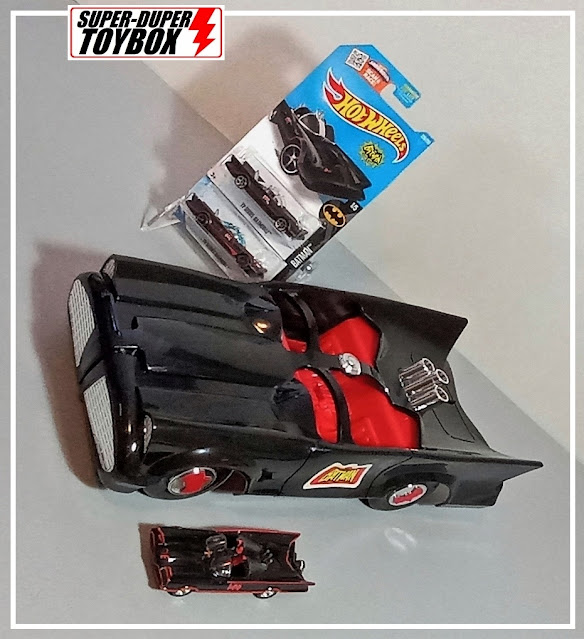 Robin! To the Batmobile! Let's Go! 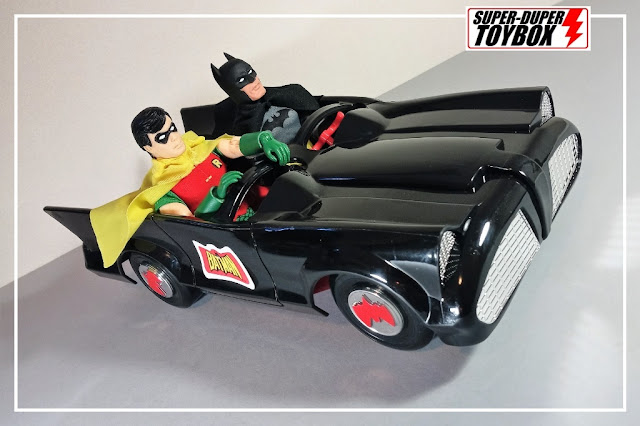 Follow the Super-DuperToyBox on Instagram!
More Later- Make It FUN!
Posted by Super-Duper ToyBox at 12:42 AM No comments: