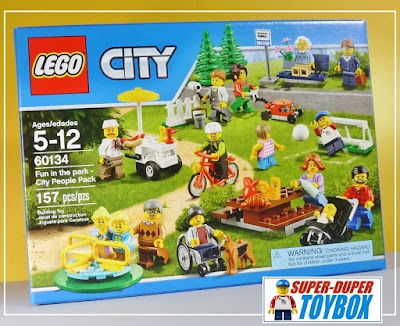 The Lego Fun in the Park- City People Pack (60134) is a great mix of City People that would be a great addition to any Lego enthusiast's collection! It's heavy on family-oriented character's, as a day in the park would be, with an excellent hot dog stand and vendor. Check out the video:

Of note within this set are the boy in a wheelchair, and new infant minifig. The wheelchair a new mold designed to accommodate a minifig, with a new type of wheel different than the bike wheel that pegs onto a small Lego axle. 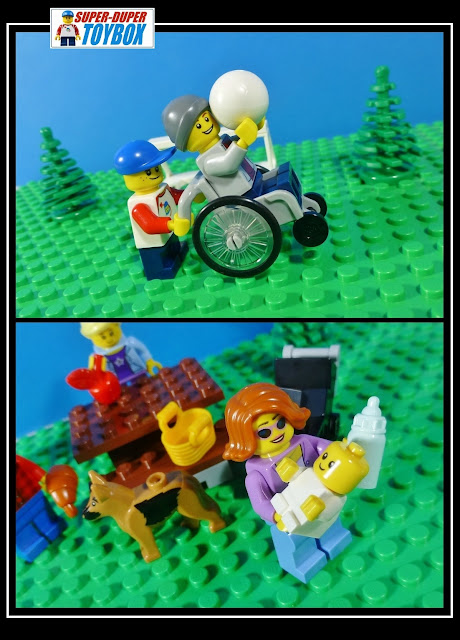 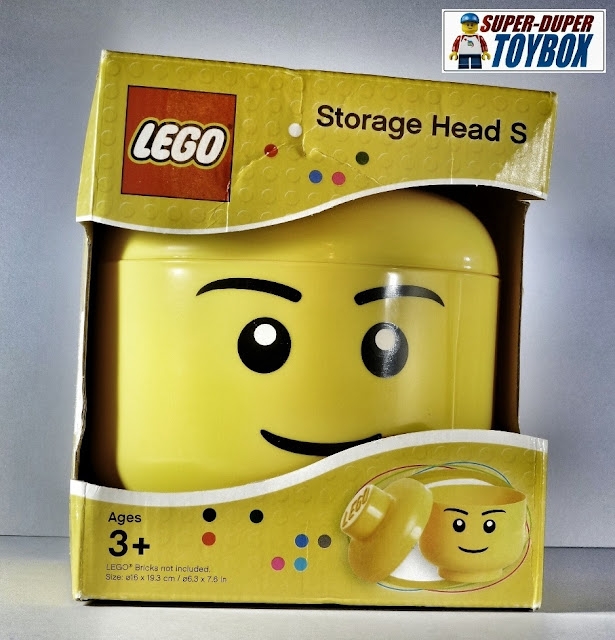 I ordered this small Lego Storage Head from an eBay seller in Asia for a better price than what I was finding domestically. Lego makes a female, jack-o-lantern, and skull version of this, as well as a larger sized storage head. I bought it mostly for the novelty, but it is full of Legos now! Check out the video: 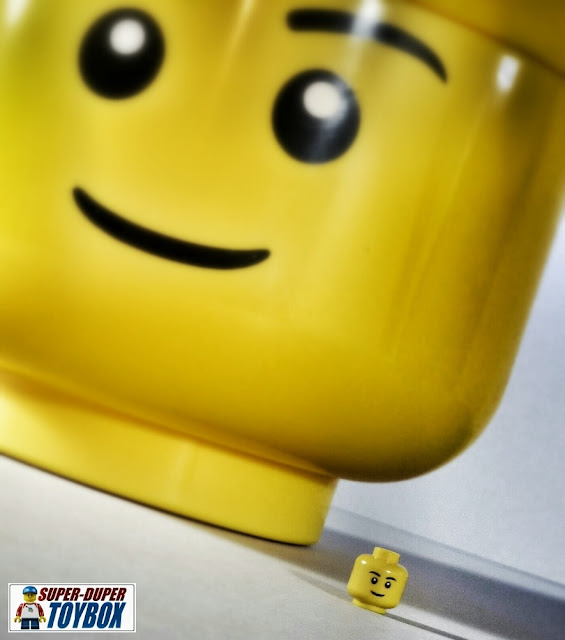 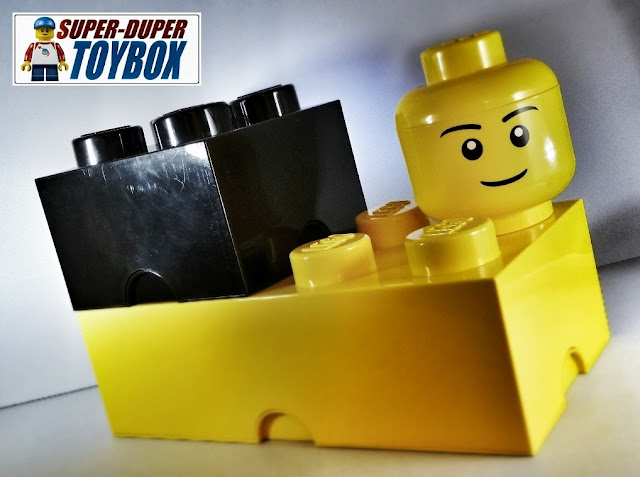 More Later- Make It FUN!
Posted by Super-Duper ToyBox at 8:19 AM 1 comment: 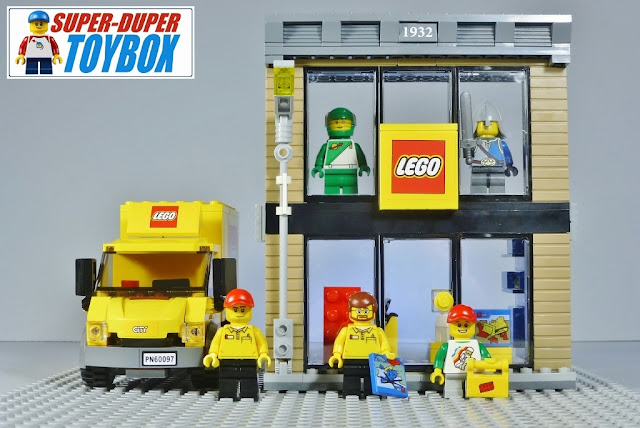 I bought this Lego Store & Delivery Truck on eBay, split off from it's larger Lego City Square Set (60097). There was nothing wrong with the City Square Set, but it was these two components I was most interested in. There's a Lego Store in the local mall I like to run through when I'm there, and the meta aspect of these components make it too much fun! Check out the video:

I love everything about this, from the minifigures included to the big front windows to the printed Lego City brick set tiles stacked inside, and a great little cargo truck to go along with. The interior of the store is small, but includes so much detail in the cash register, window displays, an stocked shelves. This is what Lego is all about! 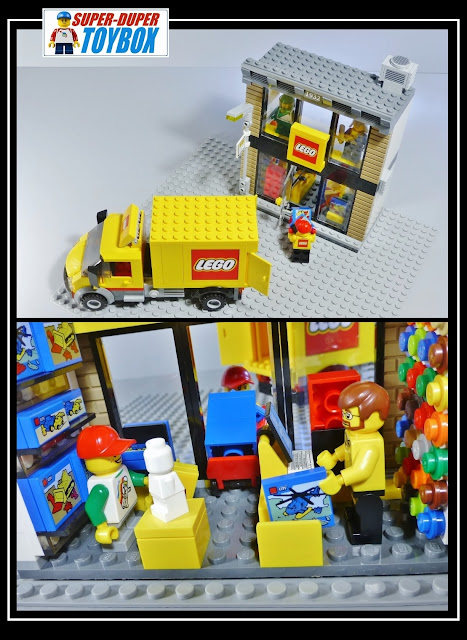 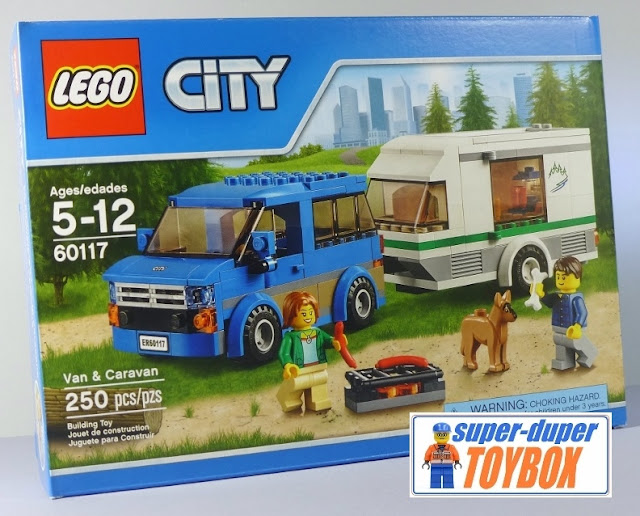 There was a lot going for this Lego City Van & Caravan set aside from a heavily discounted price at both Walmart and Target, the latter retailer my choice due to a further 5% Red Card discount. The passenger capacity in both the van and camper are commendable considering their diminutive scale, and the grill build, sausages, and doggy with bones were perfect accessories. Check out the video:

The hinged camper is the star of this set, where the happy couple can enjoy a cup of coffee together- delightful! I love the coffee maker build, and ability to peer into their little Lego world, enjoying the morning. My green baseplate and two trees made a perfect campsite, don't you agree? I loved everything about this set- buy it! 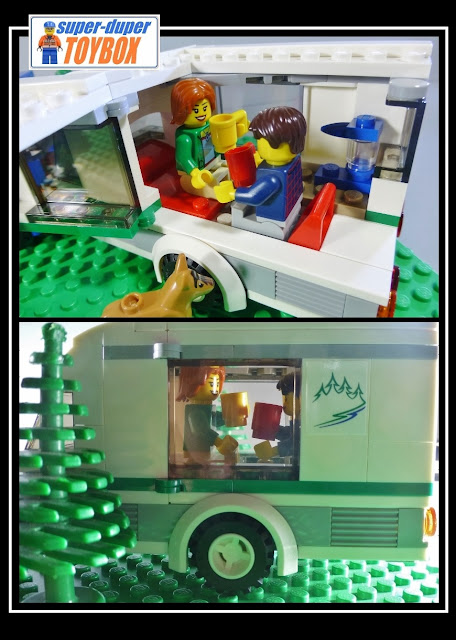 BUY THIS SET!
Posted by Super-Duper ToyBox at 11:08 PM No comments: 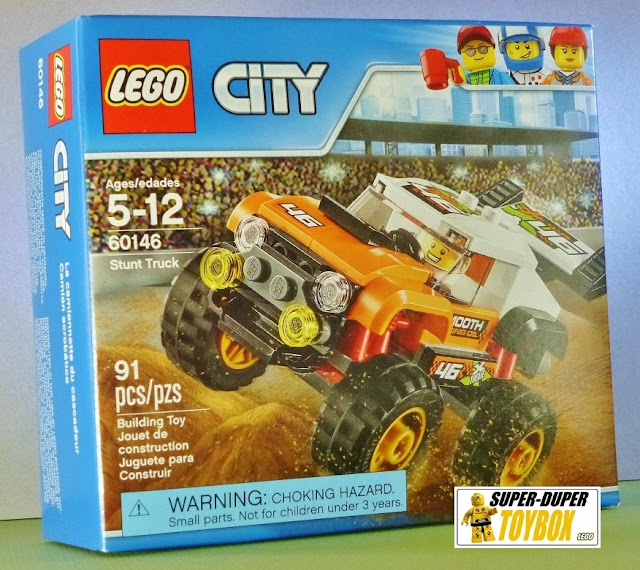 On the heels of my last post on the Lego 4X4 Off Roader, this snappy little orange Stunt Truck was also acquired at a discounted price on Target.com + an additional 5% off with my Redcard. I can pick up at a nearby location or have it shipped free in most cases. I'm not here to advertise for the said retailer, but merely to bring to the attention of fellow Lego enthusiasts inclined to investigate. I'm drawn to Lego sets that are on sale, but I'd had my eye on this one- CHECK OUT THE VIDEO:


The Lego 4X4 Off Roader is certainly larger than the Stunt Truck, but the forward rake and contrasty color scheme give it a lot of sass! These were two fun builds done in my spare time on the weekend that make a complementary pair...

BUY THESE HERE!
Posted by Super-Duper ToyBox at 9:24 PM No comments: 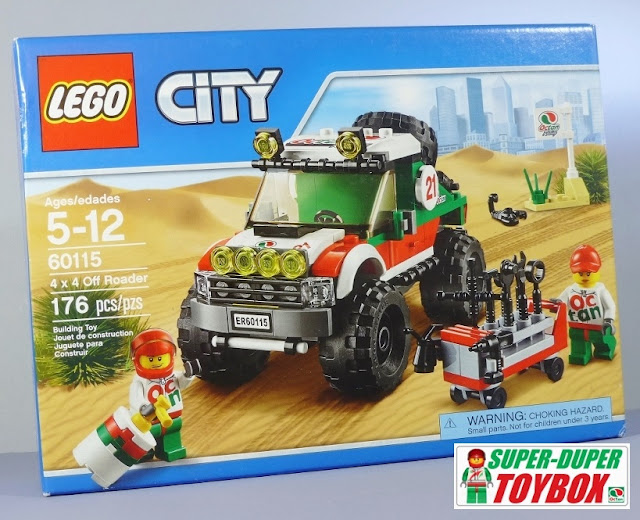 This Lego City Octan 4X4 Off Roader (60115) was too good to pass up- especially when on sale at Target.com! I love the Octan color scheme, oversized tires, and extras- including a rolling tool set! Check out the video:


The Lego City polybag Mini Racer (30314) I reviewed in 2015 goes wonderfully with my new 4X4 Off Roader! Looks like I have a team ready to roll! 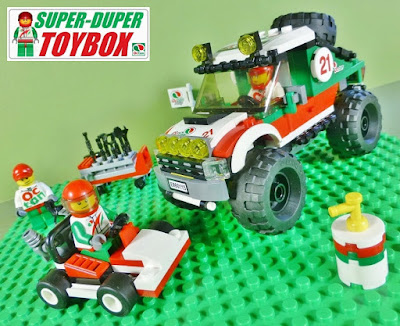 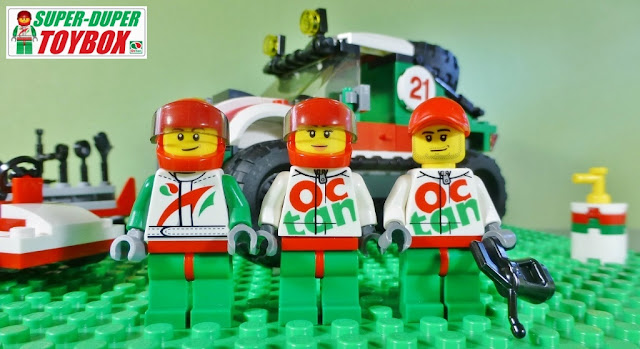 Posted by Super-Duper ToyBox at 2:25 PM No comments: 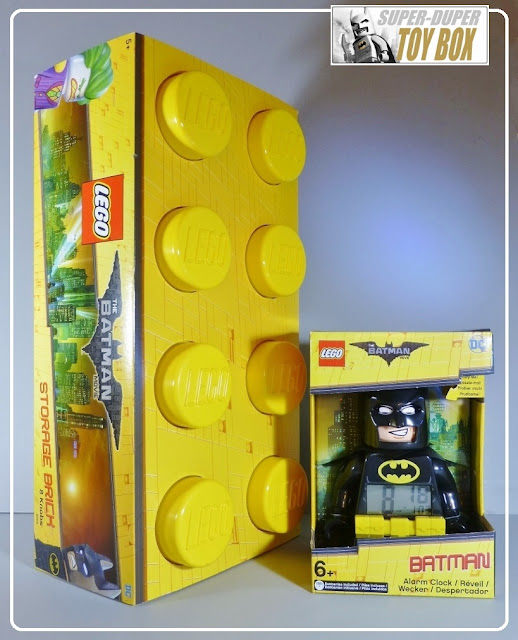 I could not resist this Lego Batman storage brick and alarm clock after seeing the long anticipated movie last month! The storage brick is enormous and easily holds the vehicles I've been building with room for more- it also stacks functionally with other storage bricks of different sizes Lego produces! Giant Lego bricks! I had eyed the previously released Lego Super Heroes Batman alarm clock in the past, but was glad I waited- this updated version has a molded utility belt, and recently went on sale at Target.com for $24.99. He has all the same articulation as his Lego minifig counterpart, except in the head, which when pushed down lights the digital clock face. Check out the video: 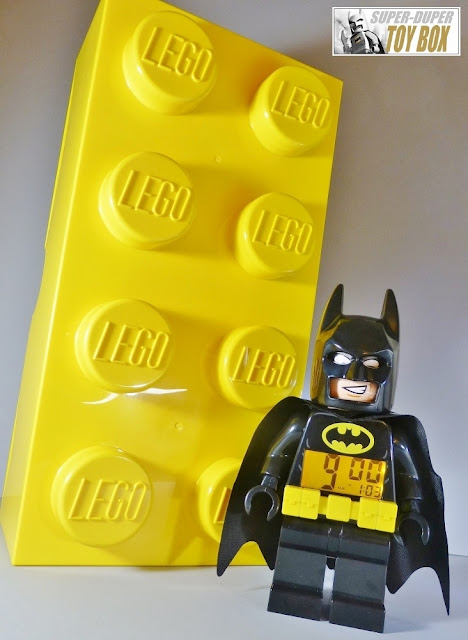 BUY THESE HERE:
Posted by Super-Duper ToyBox at 11:25 PM No comments: 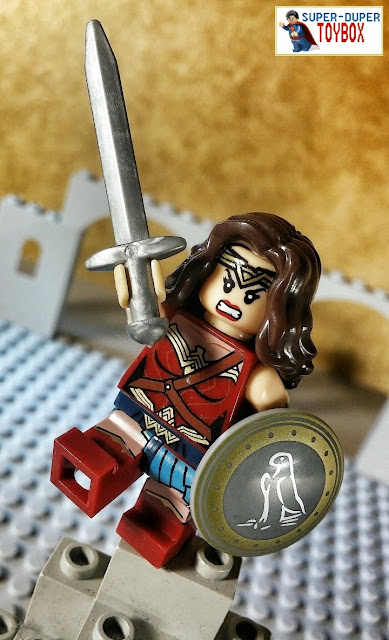 Got an epic order of BootLego minifigs from Asia I've been showing you sporadically the last couple months, part of which included this modern Wonder Woman with sword and shield. My Lego-related and minifig posts get a little less interest than my other action figure posts, but I follow my interests, which is currently obsessing over the legendary toy brick makers. I buy name brand as well, including the Lego City Fire Ladder Truck I just posted on. I bought two small Lego City sets at Target just tonight, as a matter of fact- you'll often get a better price there than TRU, albeit a smaller selection. 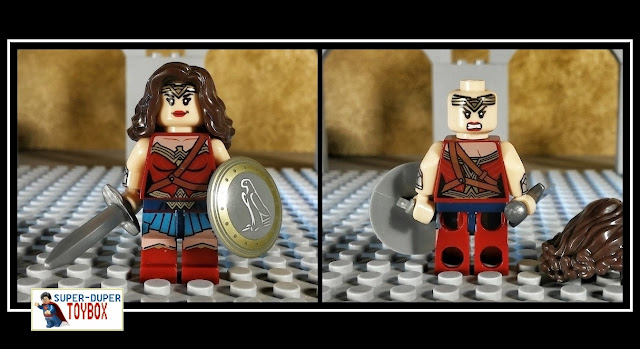 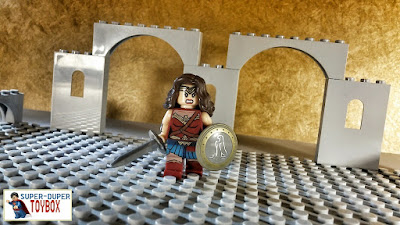 Pictured below, BootLego Wonder Woman with my Superman minifig,
one of the first BootLego I picked up on eBay... 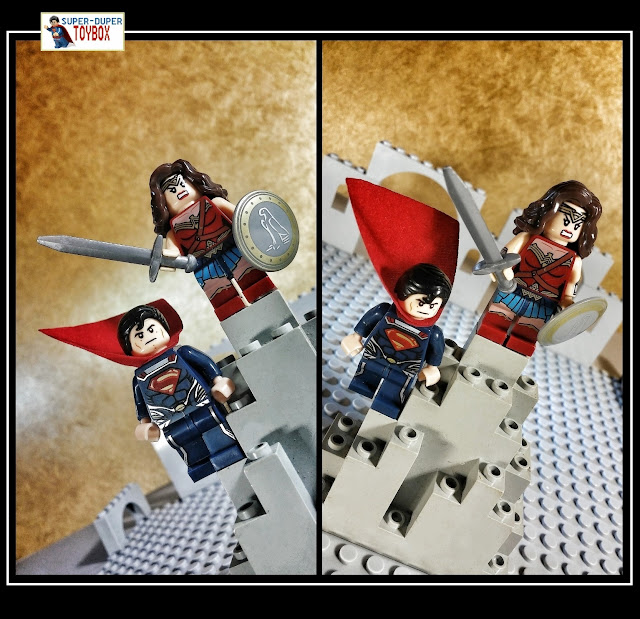 Pictured below, BootLego Wonder Woman with the Katana minifig I posted on back in January... ....they make great sparring companions! 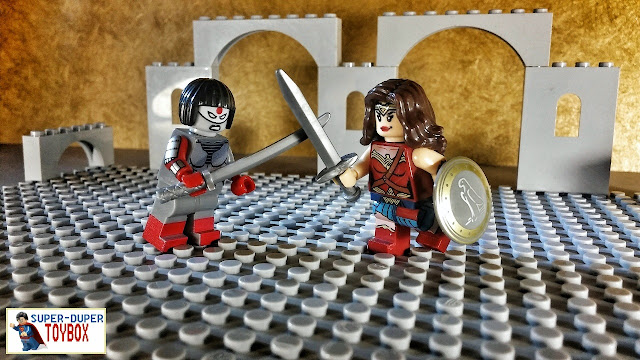 I realize some Lego fans are at odds morally about supporting any behavior of this kind,
but at what is often just north of a dollar for these minifigs shipped, dog will hunt! 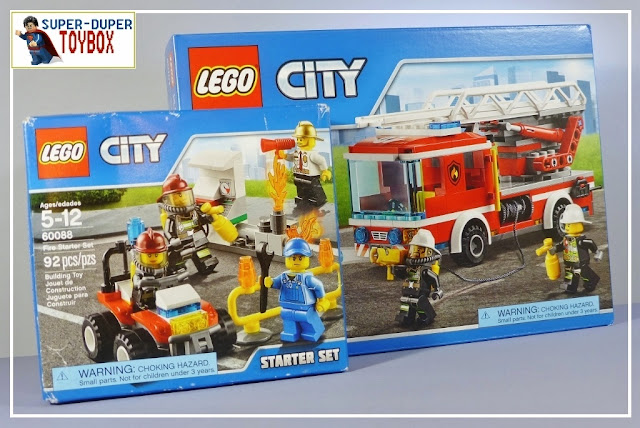 The Lego City Service Truck I built recently really inspired me to build some more vehicles, so I decided to get a fire department together with the LEGO CITY Fire Ladder Truck 60107 and LEGO CITY Fire Starter Set 60088!  Check out the video:

The ladder truck was a fun build with great reach, all kinds of extra tools are included, and a firing hose that rolls into the side. I sure love a fire truck- especially a ladder truck that swivels 360 degrees like this... 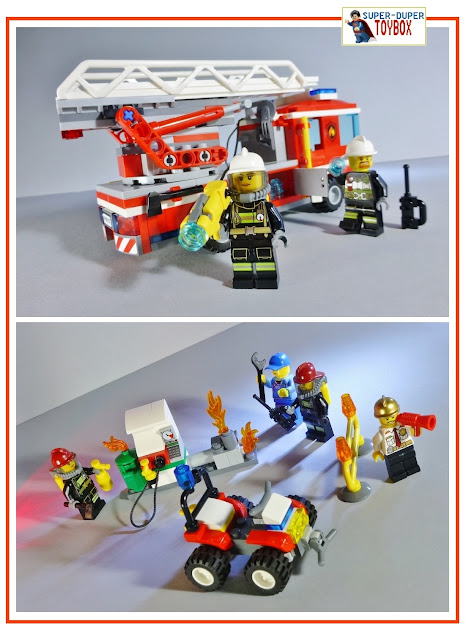 The fire starter set has a rescue ATV, all kinds of extras, and four figures to help quickly build your department! I love the Fire Chief with the gold helmet!

BUY THESE SETS!
Posted by Super-Duper ToyBox at 11:43 PM 1 comment: 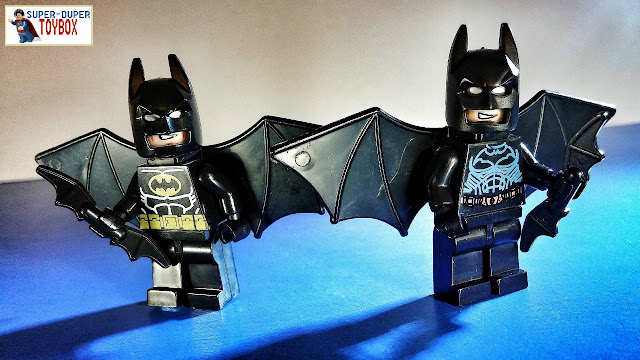 Just a quick jog back to the Dargo Block World winged Batman minifigs I posted on in January, two more from the same lot I bought off eBay in 2015. There may or may not be better toys in my collection I just haven't had time to show you, but as I enjoyed the recent Lego Batman film so much, I thought I'd share. The one on the left is a typical all-black Batman, inspired by the '89 Michael Keaton Batman, which carried over into the comics for awhile. The Dargo Batman on the right has a utility belt that reminds me of the Dark Knight outfit worn by Christian Bale.... 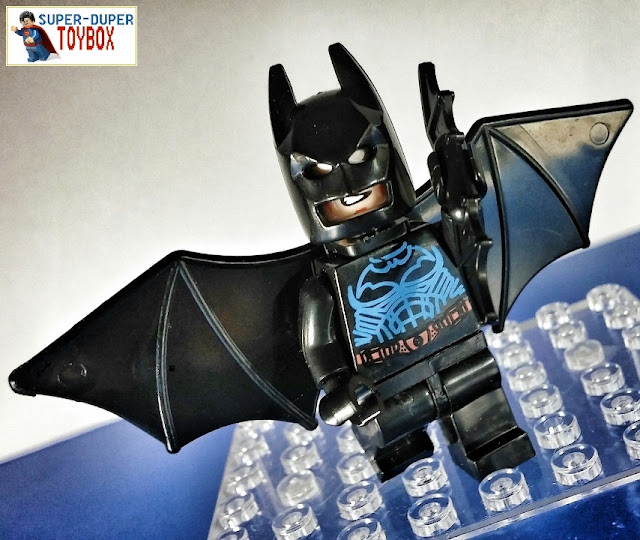 Below, the Dargo Dark Knight Batman with an as yet to be identified, dark blue Batman from the first lot of Dargo Batmen, and the modern black Batman with another, caped version I posted on along with a BootLego Flash and Superman back in October of 2015... 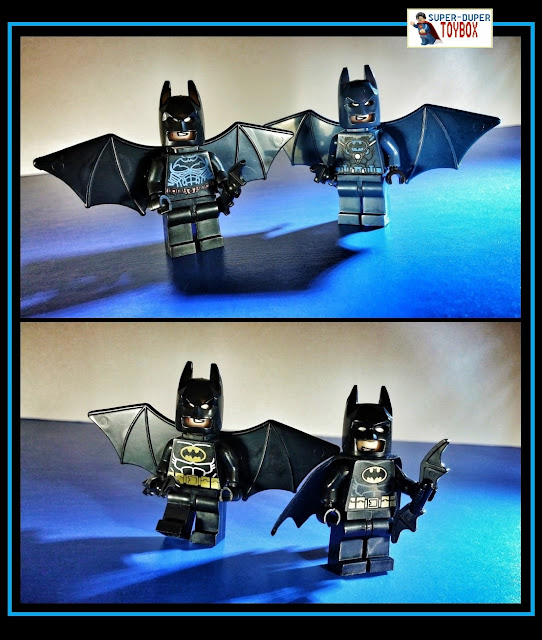 I think I prefer the torso deco on the winged Dargo more than the caped modern Batman- it's simpler, but the belt and bat symbol show more color, and the armor lines of the chest show better. He looks more like a toy, and I like that! Seeing Batman dressed all in black for the first time back in 1989 was a shock to a Bronze-Age baby like me, but it makes sense as camouflage necessary for the job. It also looks cool! 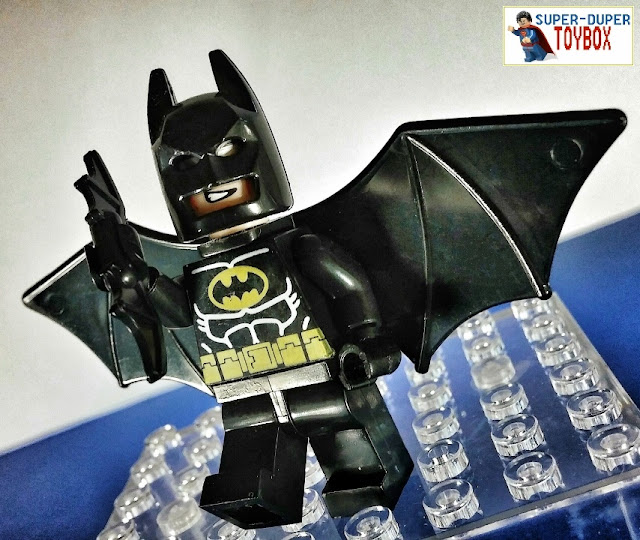