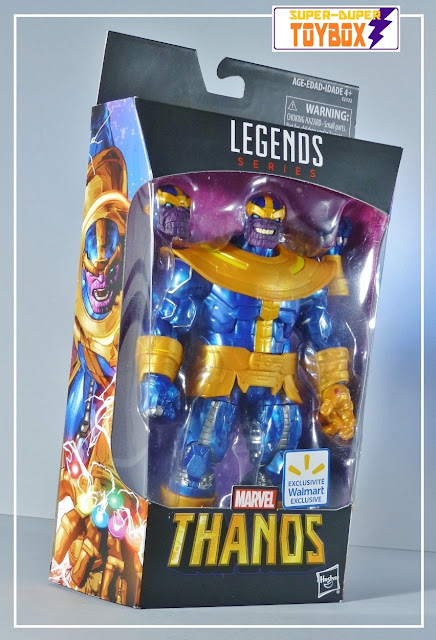 I ran into a few of these Walmart Exclusive Thanos finally, surprised by news of this repackaged BAF from the 2015 Thanos Wave with Batroc, Hellcat and Spider-Woman. Threre was also another Captain America, Iron Man, and Hulk from the Age of Ultron movie. I had interest in Hellcat initially, having read Marvel NOW! She-Hulk relaunch in 2014, but had stopped collecting Legends for a few years there. The packaging on this looks great, as does the figure inside. At the price of a regular Legends figure on the pegs, getting this beefy 7.25" figure with extra head and Infinity Gauntlet accessories is a decent value. 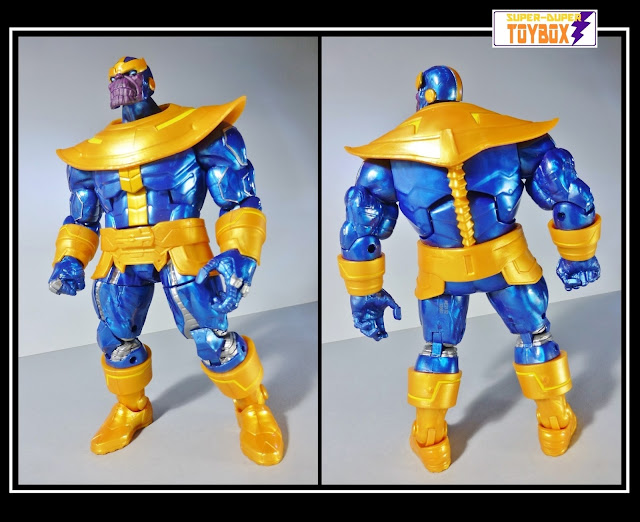 The recoloring of the previous, more darkly painted Thanos in his classic colors looks great. Accentuated by silver panel lines throughout the limbs, the figure has an all-over metallic finish, the Infinity Stones individually colored on the gauntlet. The skin is darker than the previous version as well, one with the iconic evil grin, one close-lipped. 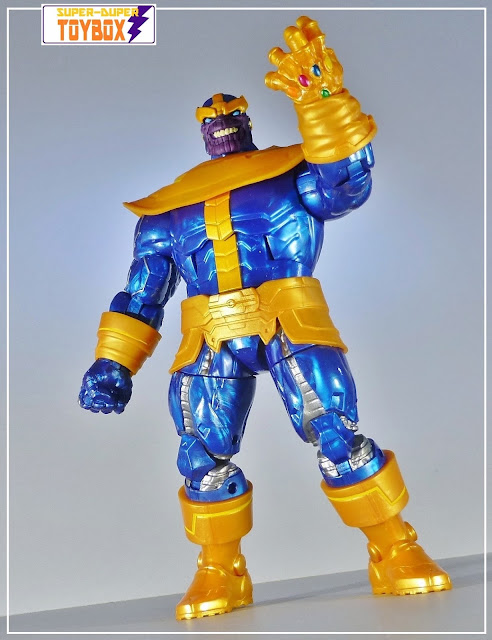 The articulation is pretty limited, due in large part to the bulk of the figure, but the hips are just poorly designed and nearly immobile. The abdominal hinge is also extremely limited, unfortunately, and the elbows aren't a great deal better. Still, he'll mostly stand on the shelf, Infinity Gauntlet outstretched in a menacing fashion. I'm mostly okay with that for now because this Thanos is just such a great looking action figure- a great value for that alone at twenty bucks, in spite of the limited articulation. 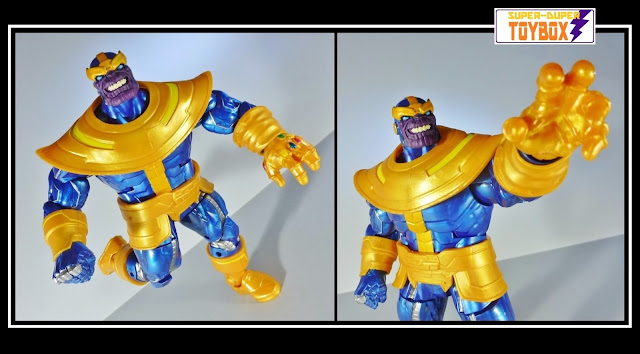 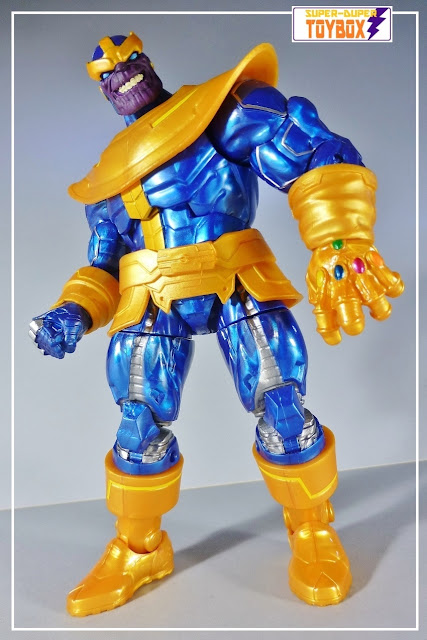 Below, Thanos with another shiny Marvel Legends BAF, the 2013 Iron Man 3 Wave Iron Monger. Like Thanos, Iron Monger has a lot of looks, but limited range of articulation... 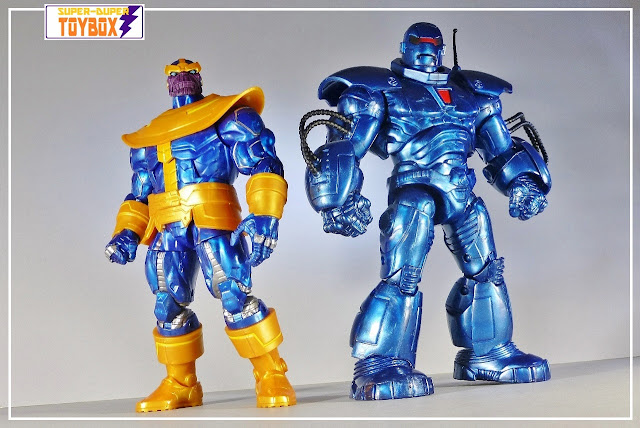 Perhaps my favorite BAF was last year's Gladiator Hulk,
who by comparison had better articulation than Thanos in my opinion... 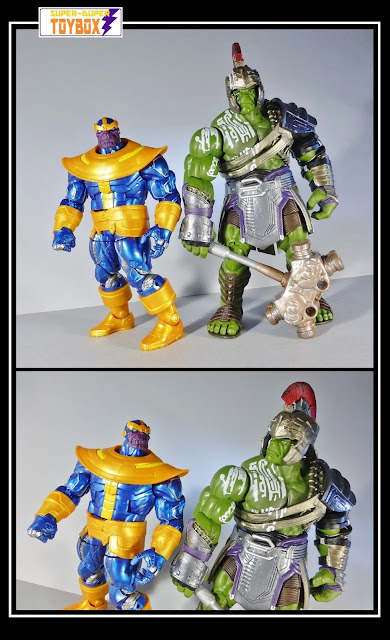 And finally, the Marvel Legends Thanos with my Marvel Select Thanos and smaller Marvel Universe Thanos, who were also styled after the classic look of the character. The Marvel Select is perhaps the best Diamond Select has ever released, and one of my favorite action figures. And while I've sold off most all of my 3.75" Marvel Universe figures, I've held onto this Thanos... 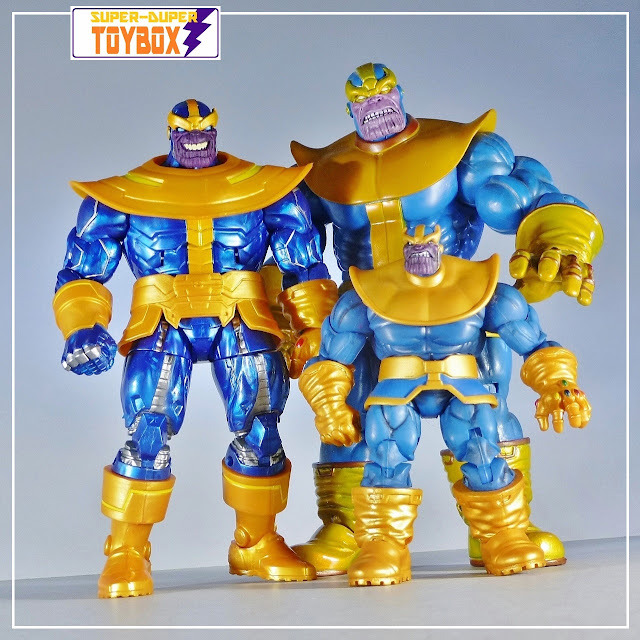 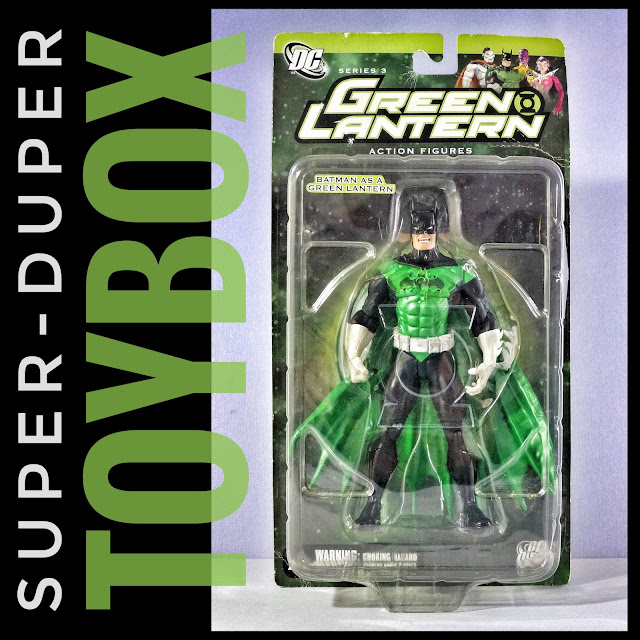 More of my collection is up for auction at the Super-DuperToyBox eBay store! If you live in the Continental U.S., now is your chance to make a bid on lots of very cool DC Direct Green Lantern Series figures from my personal collection.  I loved the DC Direct line of action figures, this Green Lantern Series 3 Batman as Green Lantern from the halcyon days of their artistry! Keep an eye on my Instagram as I post images of items for sale in the future!

Another DC Direct figure for sale from my personal collection is this Blackest Night Series 3 Arisia Rrab from 2010. What a beauty! I loved Jeff Johns' 2009-2010 miniseries, and found new interest in his update of the Green Lantern mythos after reading it, even venturing further into the New 52 Green Lantern title in 2011. 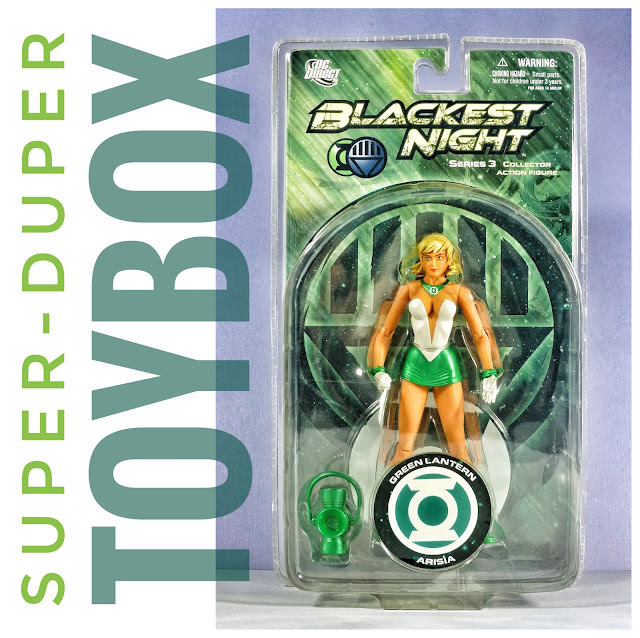 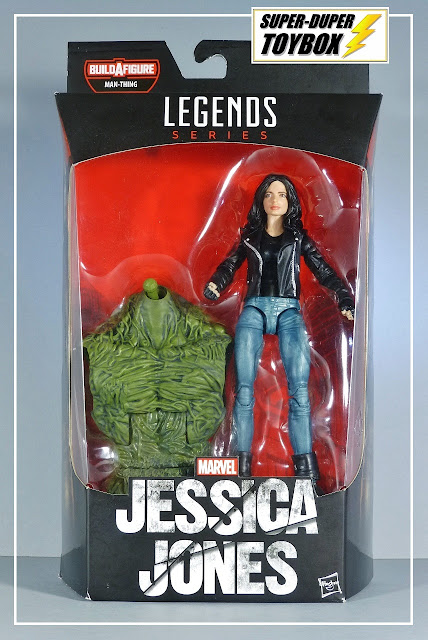 Jessica Jones was not even on my radar until the 2017 Netflix series hit the internet, which I still haven't seen, but I loved the plain-clothed presentation of this Marvel Legends figure. The leather jacket is great! We are getting the new dot matrix tampo for the portrait, which resembles actress Krysten Ritter from the Netflix series well enough. Interestingly, it was pointed out by YouTuber AnthonysCustoms that the same printing method was utilized for the dry brushing affect on the jeans, likely for automation and consistency. 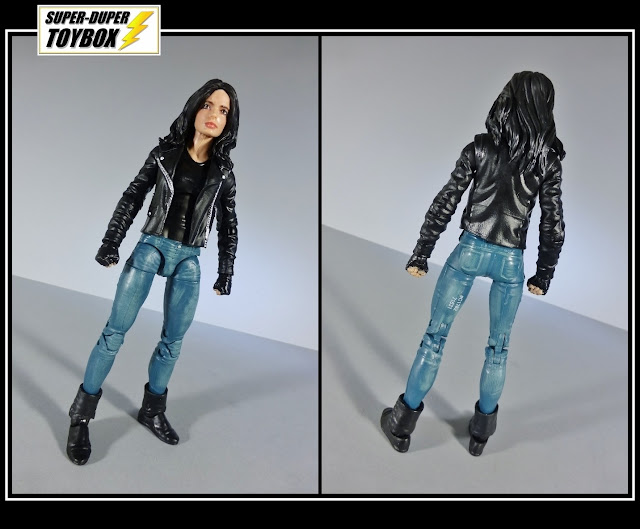 Jessica has serviceable articulation, as far as the females get, with some particularly good range in the torso joint and the shoulders, in spite of the jacket. She can do about as much as any female figure from Hasbro, and she really looks great. 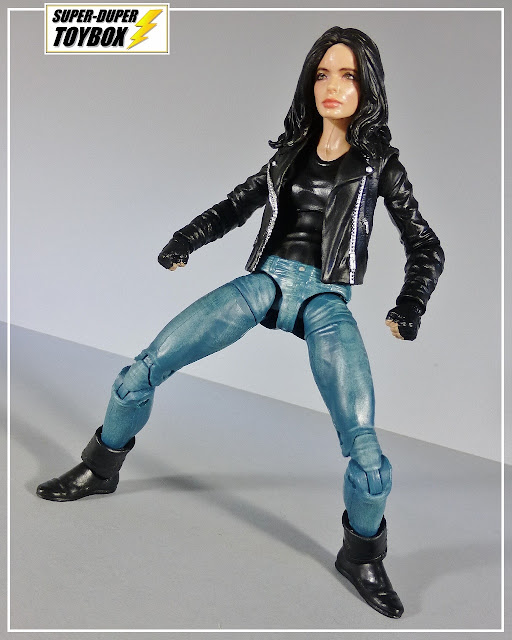 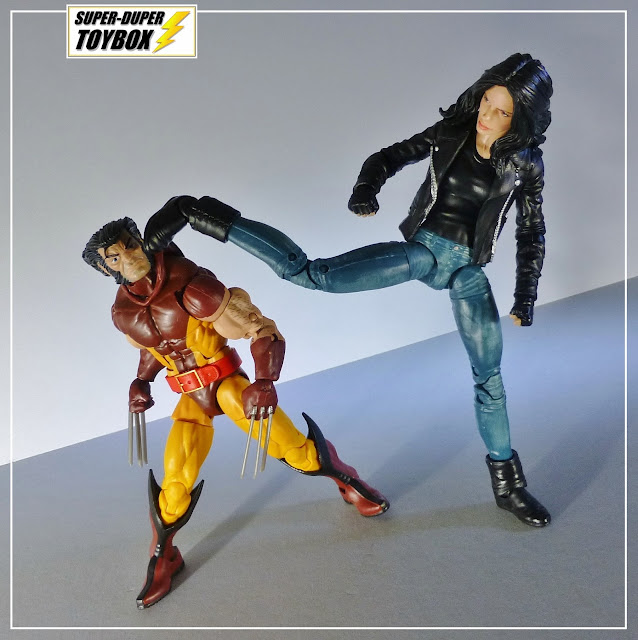 I'm not sure how Jessica would fare against Wolverine's claws, but she did survive an attack by Iron Man and Vision in Alias #26 according to Wikipedia, but only barely. Appearing first only seventeen years ago in the aforementioned series, Jessica Jones is often affiliated with Luke Cage, Carol Danvers, the New Avengers, and of course the Defenders. She does possess superhuman strength, flight, can block mind control, and is a skilled detective. 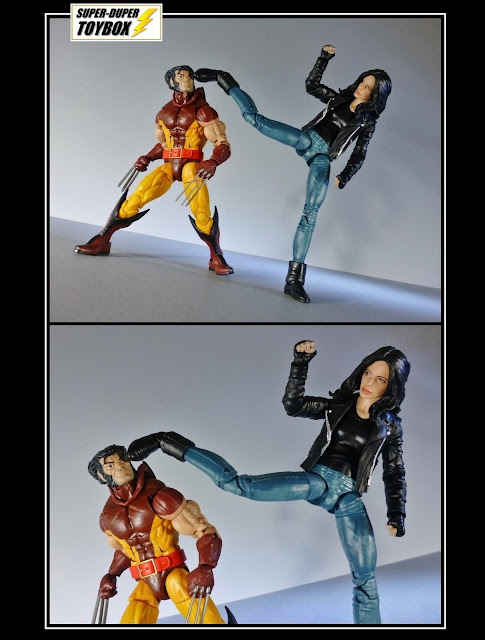 Jessica is but one of a recent, growing number of female Marvel Legends I've acquired in the last year. Click the links to see my posts on each, from Left to right, Captain Marvel & Ms. Marvel, Nakia & Okoye, Jessica Jones, Angela, Misty Knight, Thundra, Spider-Woman, and Shuri. 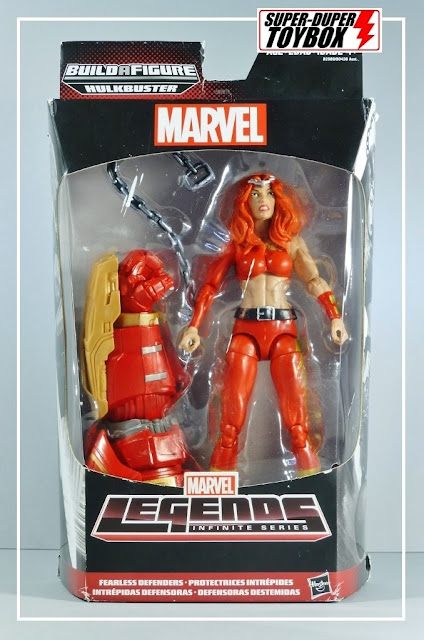 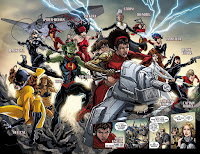 I picked up this Marvel Legends Thundra at half-price, though I'd admired her hanging on the pegs in 2015, and her variant, Valkyrie.Appearing first in Fantastic Four #129 (1972), Thundra originated from an alternate 23rd Century, where Earth is known as Femizonia, and ruled by a race of warrior women. More recently she's made a minor appearance in the short lived Fearless Defenders (2013), which I finally read this year after subscribing to Marvel Unlimited. 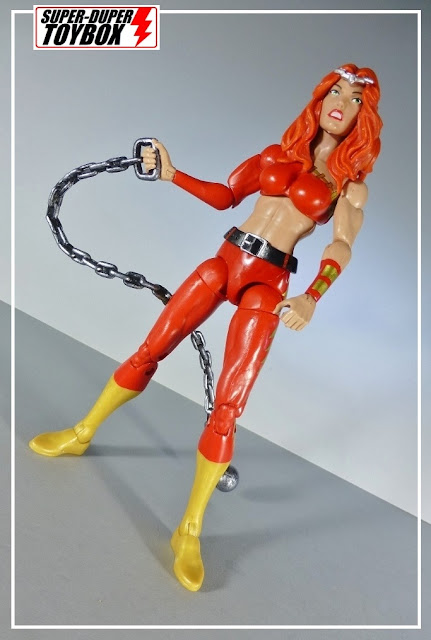 Misty Knight and Valkeryie are obvious choices for a Marvel Legends Fearless Defenders sub-series, but Dani Moonstar would have been a more relevant character choice than Thundra, having been a fleshed out character. Thundra was merely part of a larger group of heroines that came to the rescue in issue #6. That said, I appreciate the simplicity of this action figure, and her flashy outfit. 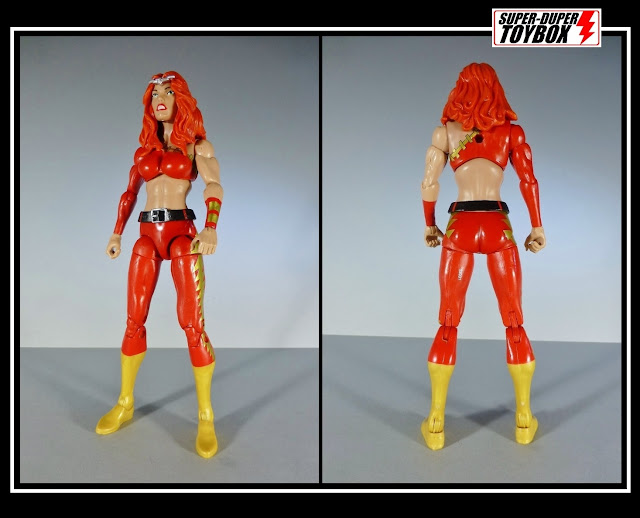 There are some neatly printed tampos throughout the figure, enabling Hasbro to reuse parts by simply repainting- they are consistent, so I'm fine with it. She has the same limited articulation that most female Marvel Legends have, the head particularly immobile due to the hair sculpt. The reverse swing position of her ball chain an be a challenge to pose, leaving me wishing Hasbro has put a wire through it. That said, I had fun posing her with it. I'd probably never paid full retail for this unless trying to complete the Hulkbuster BAF, but for half price she's fun. 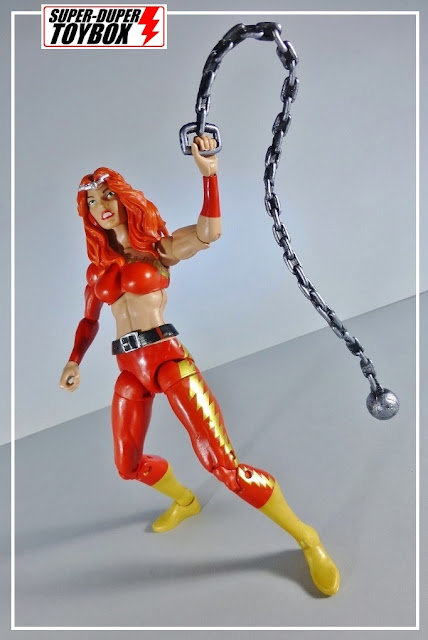 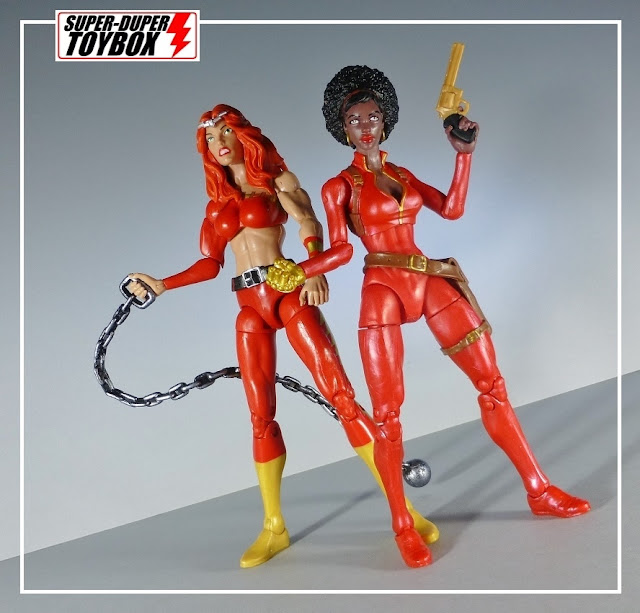 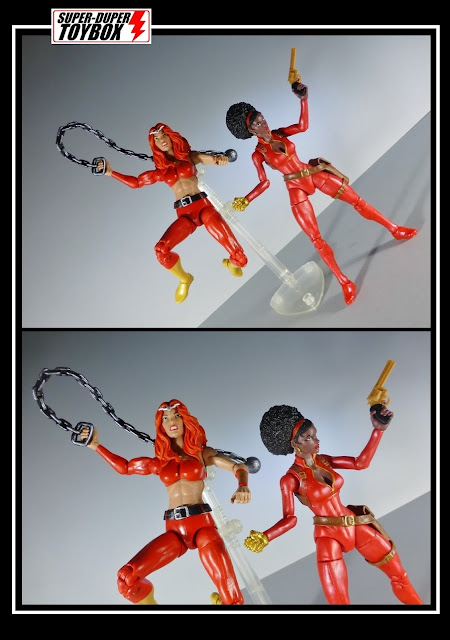 And finally, Thundra with Marvel Legends Ares, who appeared in Fearless Defenders
to battle his daughter Hippolyta for lordship over the Amazons...

More Later- Make It FUN!
Posted by Super-Duper ToyBox at 9:14 PM No comments: