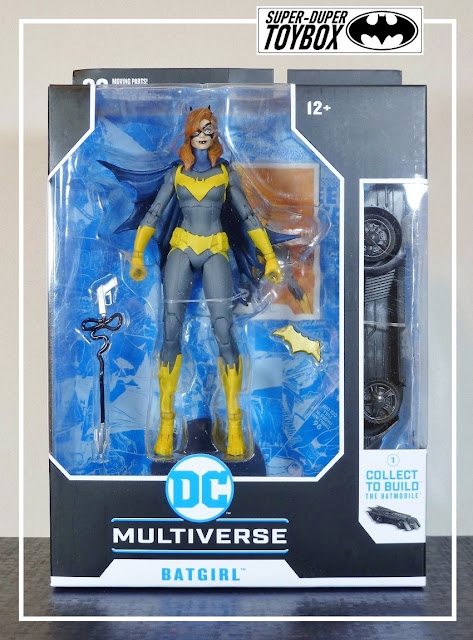 I didn't keep up with DC Comics too far past the first year or two of the New 52 relaunch, so I'm unfamiliar with Batgirl in context with this Art of the Crime version, published in 2019. Regardless, I loved to this new outfit, drawing from classic Batgirl elements, updated to make her seem fresh. Like the McFarlane Batman, Batgirl has a very dynamically pronounced cape, which isn't the preference of all collectors, but I like it. The updated chest emblem, doubling as a harness for a backpack hidden behind her cape, and utility belt are fantastic. 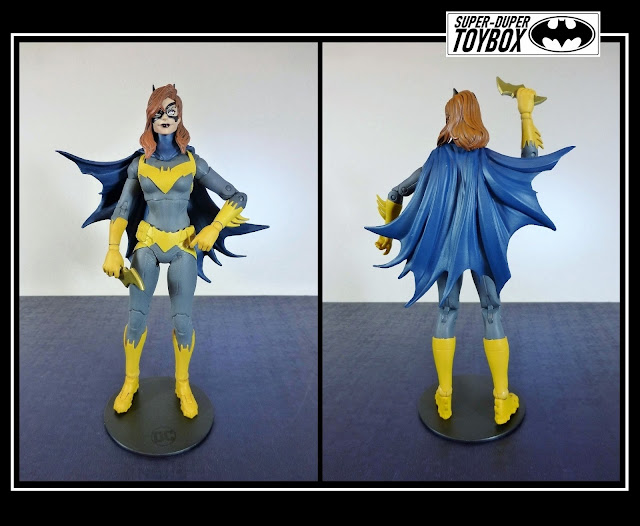 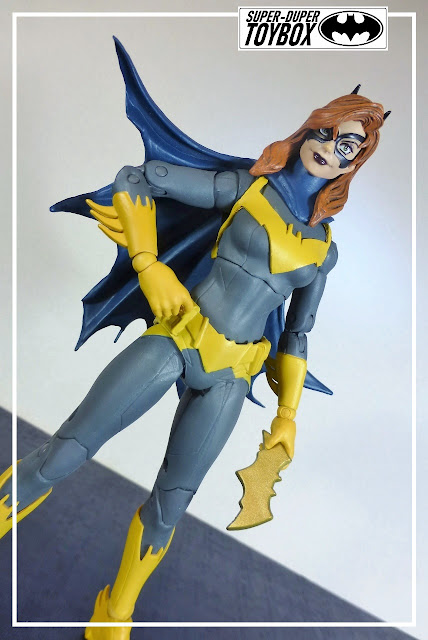 As I said in my last post on the recent McFarlane Batman & Nightwing, the action figure community is mixed on opinions regarding this first wave of DC figures, but I sincerely like the figures I have picked up. I loved the DCUC line by Mattel, but a lot of their recent figures just haven't interested me much. Aa a fan of the old DC Direct figures, the 7" scale didn't bother me, and the McFarlane figures have a little more depth in their sculpted detail and better articulation. And maybe a little more … well, style. I was also grateful for the return of the figure base- I hated when DC Collectibles and Mattel stopped including them. 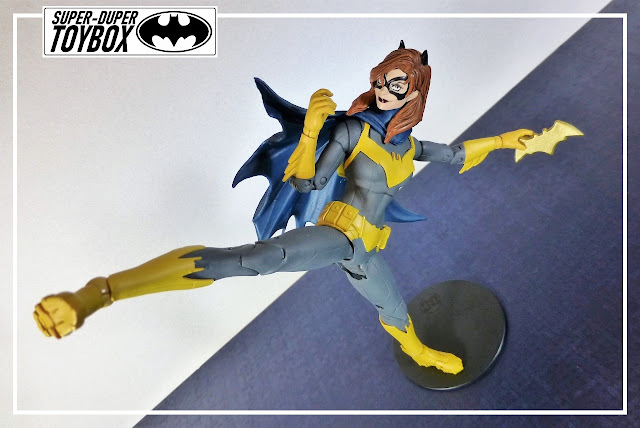 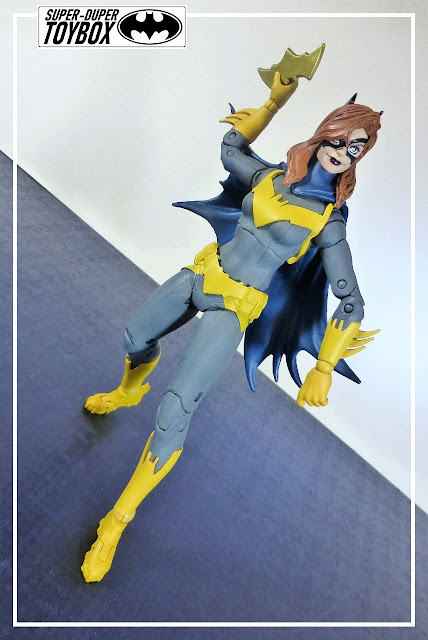 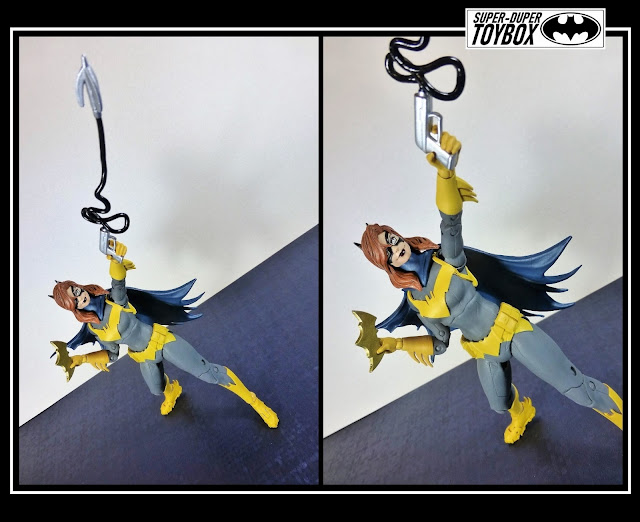 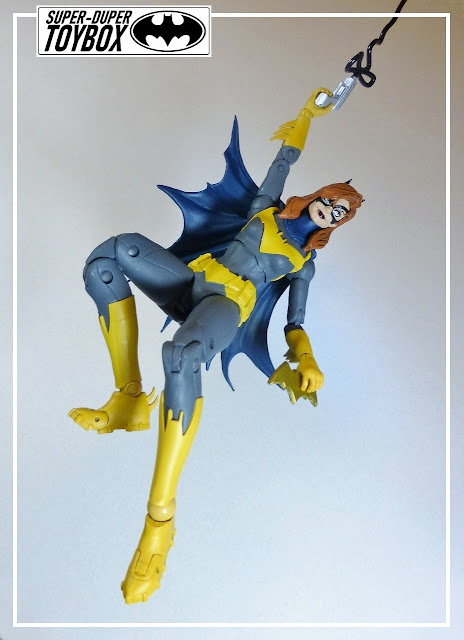 Like the McFarlane Batman, Batgirl gets a grapple gun and batarang, but unique in design- McFarlane could have given them the same sculpt, but went the extra mile to give Barbara her own. Sure the grapple line is permanently affixed in a partially ejected state, but it would take little effort to customize that if one cared to. A sturdy collector card was also included with this figure, as well as one third of the "collect to build" Batmobile that Nightwing also came with. For the figures with these CNC parts, we are asked to pay an additional five bucks- as this holds little interest for me, I will sell mine on eBay to offset that extra cost. 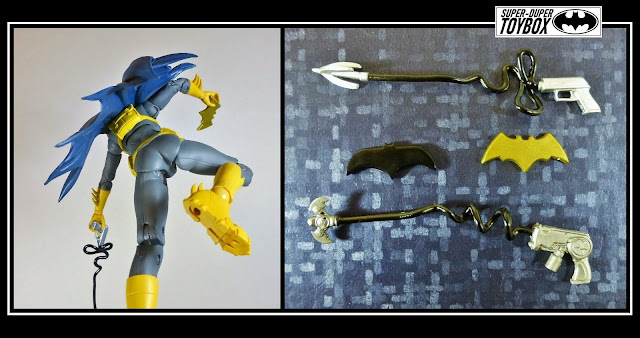 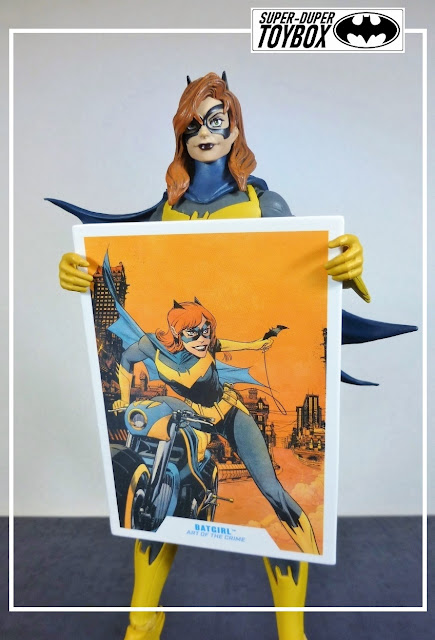 Below. McFarlane Batgirl towers over my Mattel Legacy Edition Batgirl: 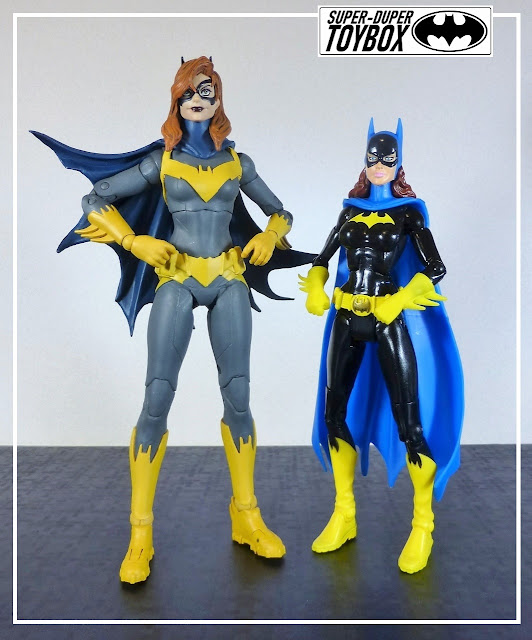 Below, McFarlane Batgirl with the McFarlane Nightwing and Batman from my last post: 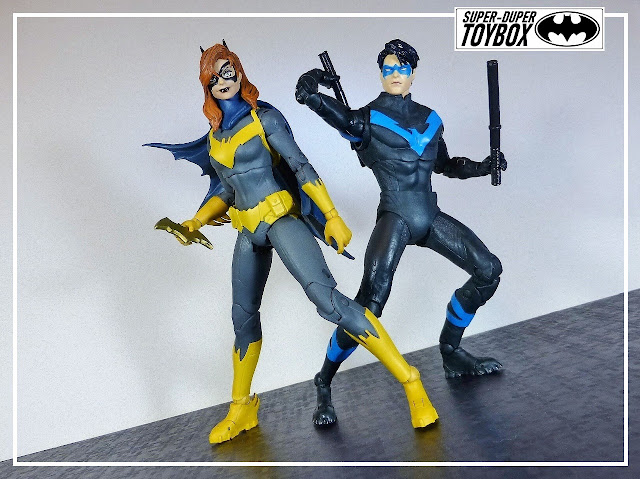 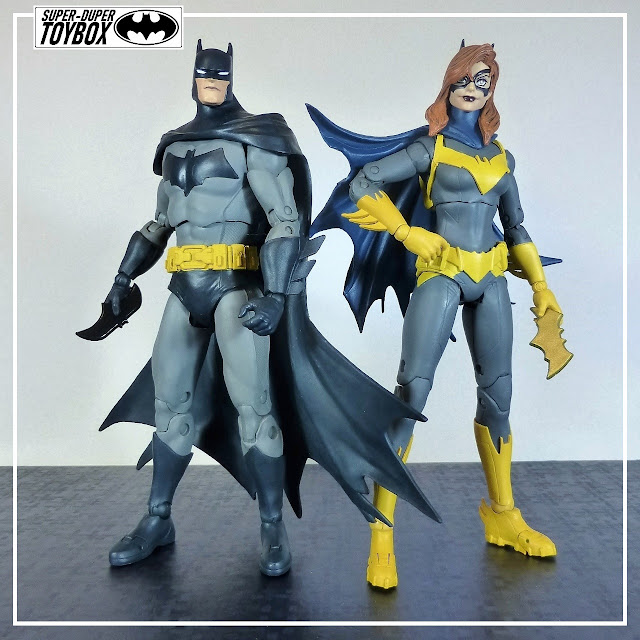 More Later- Make It FUN!
Posted by Super-Duper ToyBox at 11:00 PM No comments: 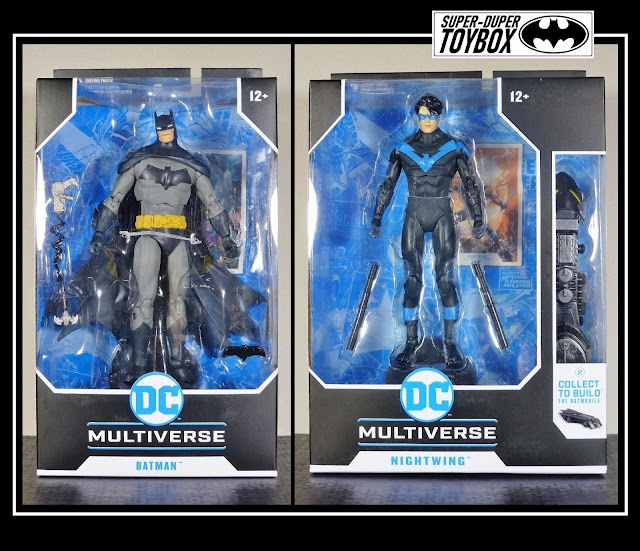 My initial skepticism regarding the announcement of McFarlane Toys taking over the DC license from Mattel was tempered by the collector community's unbridled enthusiasm of their recent Fortnite offerings, a property most adult collectors knew nothing about. Like many, I thought the DCUC line was fantastic, offering a staggering array of characters never seen before in an action figure series, which continued into the rebranding as the DC Multiverse line. Somewhere along the line, Mattel felt a little flat to me however, and maybe DC felt it was time for a fresh approach as well. McFarlane's upscaling into 7" bothered me less than a lot of collectors, and I was interested in additional points of articulation MacFarlane offered, so I bought a couple. 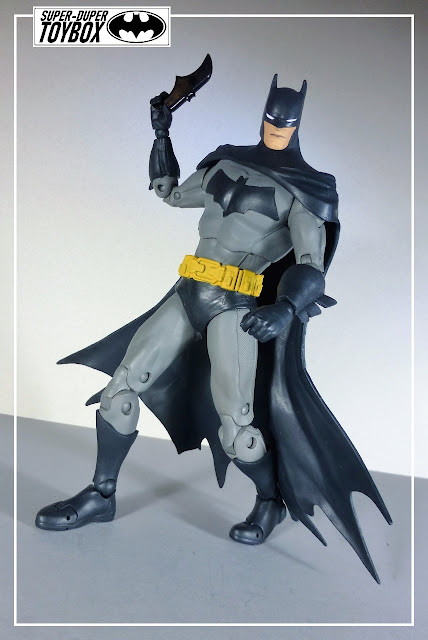 The collector community had a litany of complaints regarding this initial McFarlane Batman- while his portrait's resemblance to the Detective Comics #1000 Batman may be somewhat of a reach, I like him in person purely as a Batman figure. The ball-hinge joints at the wrists and ankles are not my favorite, but that's how McFarlane Toys designed them, and I like this figure enough to overlook that. I agree with the consensus that his abdominal joint may have been cut at the wrong spot, but it looks way better than my initial impression when these were first solicited. 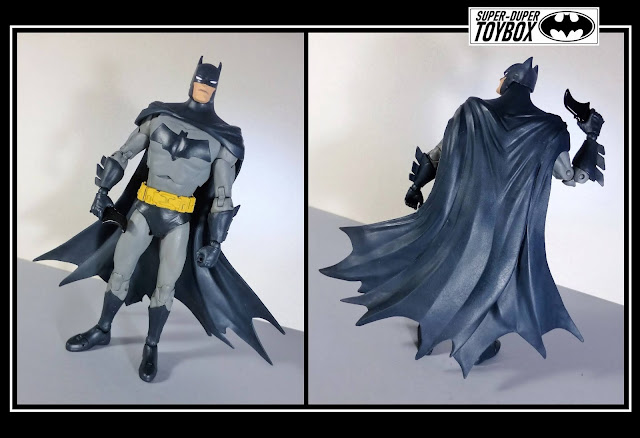 Batman's grapple gun is fantastic, but limited in possibility due to it's partially ejected mold. A modicum of ambition would suffice to customize this, but that holds little interest for me. The batarang included is thick as a brick. I feel less distracted by this than some, but it's too thick. That said, the figure grips it securely. 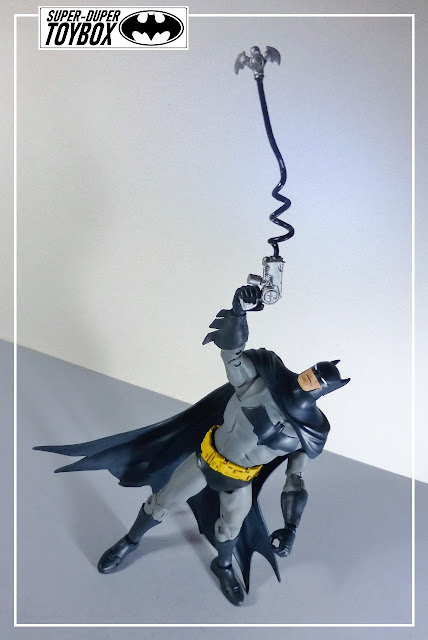 A cloth goods cape is preferred by some, but it's hard to deny the fantastic sculpt on Batman's. Like his trunks, it's made of a pliable rubber, and doesn't hinder articulation as much as you may think. I like the look of batman's cape draped over the shoulders, and I'm glade McFarlane went this direction. I really like the dark gray/blue on this figure, mistaking it for black in the solicitation photos back in December. 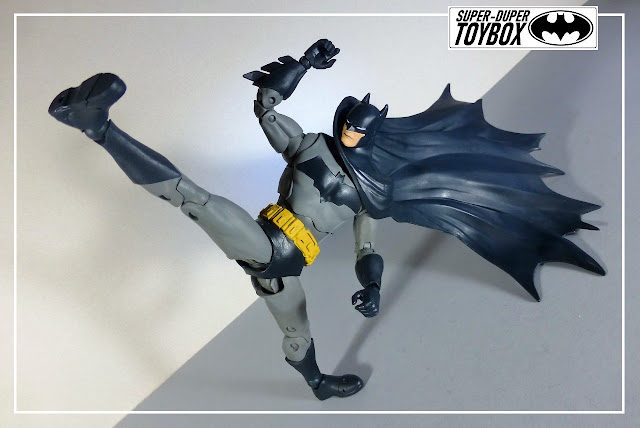 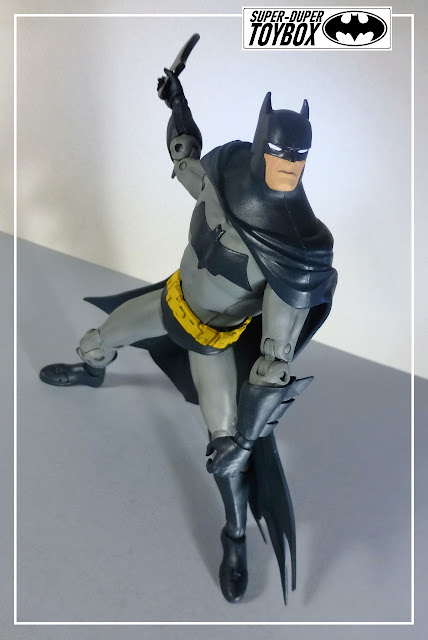 Below, McFarlane Batman with my DC Direct Arkham Asylum Batman ,a fantastic Batman figure that I've held onto for nearly nine years. Though I sold the bulk of my collection in the last couple years, I'm a big fan of the old DC Direct figures, and have even acquired a few recently. 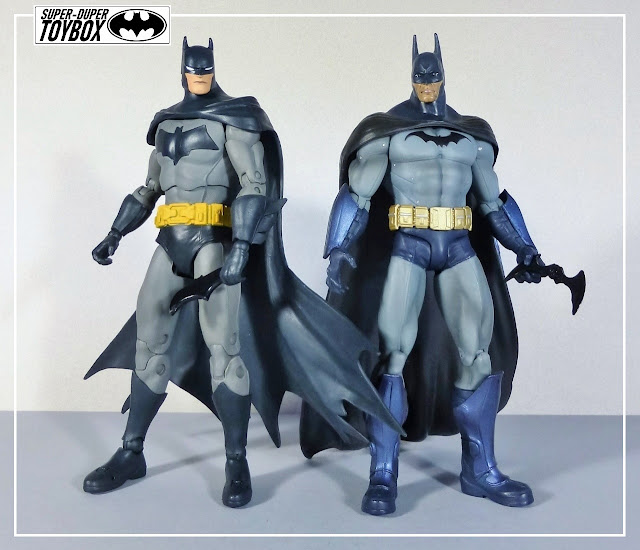 I may like this McFarlane Nightwing even more than the Batman. He has all the nice armor line and fabric texture detailing throughout, and a sculpted chest insignia like Batman, and his abdominal cut is placed a little better. One of three collect-'n-connect pieces for a small Batmobile is included with this figure at a price-point five dollars more than the regular boxed figures like Batman. This holds little interest for me, and since I used Amazon card points to purchase these figures at a discount, I have little skin in the game. 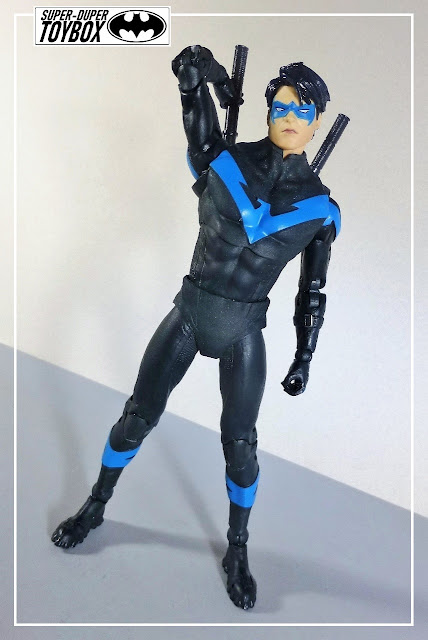 Nightwing holds his escrima sticks securely, and can easily reach over his shoulders to grab them, where they clip onto his back for storage. They are molded in black, unlike his body, which is actually a very dark blue/gray- the straps on his forearms are painted black. McFarlane also sculpted the blue boot tops on this figure, and painted the knuckles on his gloves in the same blue, which adds a lot to this largely monochromatic figure. I like Nightwing's boot treads as well, and I have to say I'm surprised how much I like a toe hinge on these figures- it really adds dynamism to the poses. 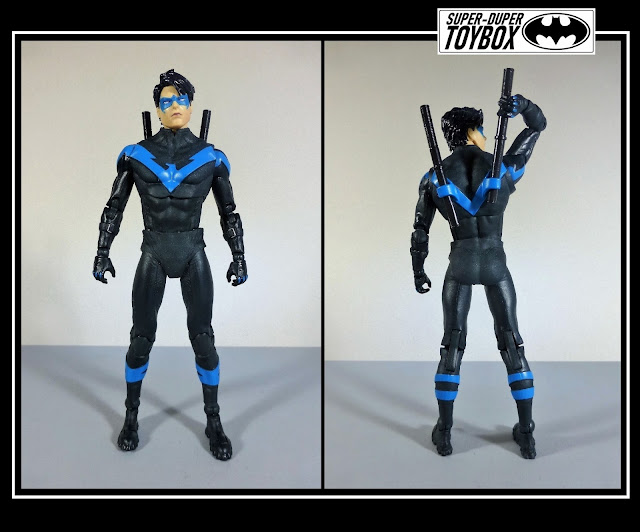 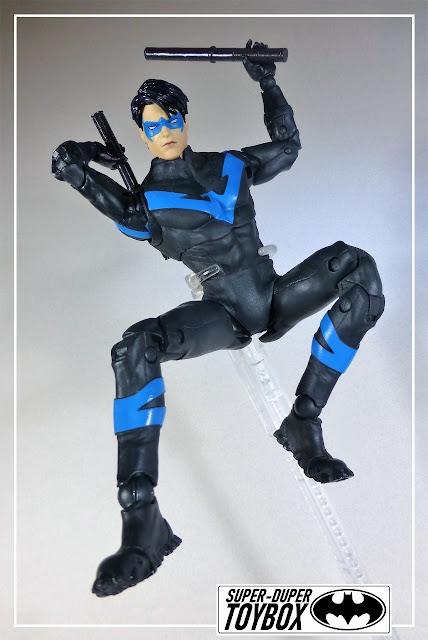 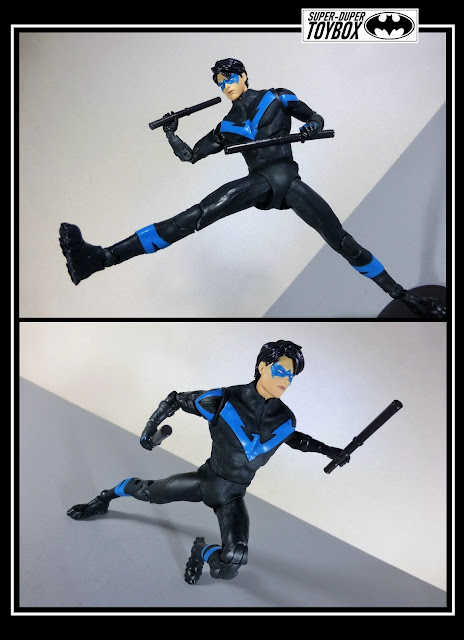 Below, McFarlane Nightwing with my DCUC Nightwing and my Arkham City Legacy Edition Nighwing, both by Mattel. DC Collectibles has produced better Nightwing figures than these two older models, but I feel this McFarlane figure may be the best yet. His sculpt and paint details are fantastic, and his body proportions make him look like he jumped right out of the comics. 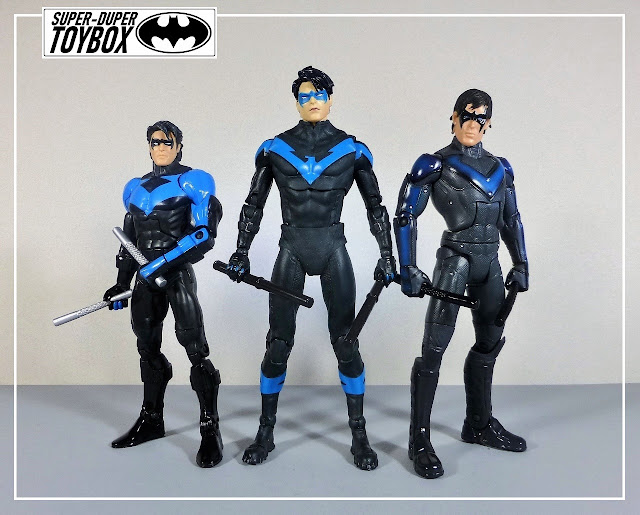 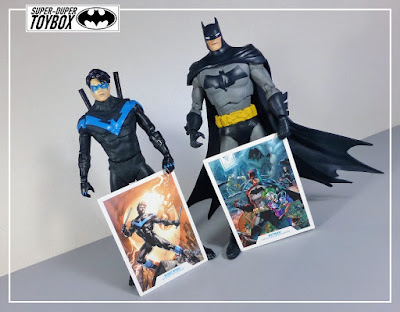 Both figures came with a collector card made of thick, durable stock, and more importantly, bases upon which to stand them. I really hated when DC Collectibles and Mattel stopped giving us figure bases, and hope McFarlane Toys continues this trend. I think these are outstanding action figures, in spite of what may or may not be perceived as their shortcomings, and I am looking forward to what McFarlane has planned for the rest of the year. Visit McFarlane.Com online to keep abreast of all that's developing! 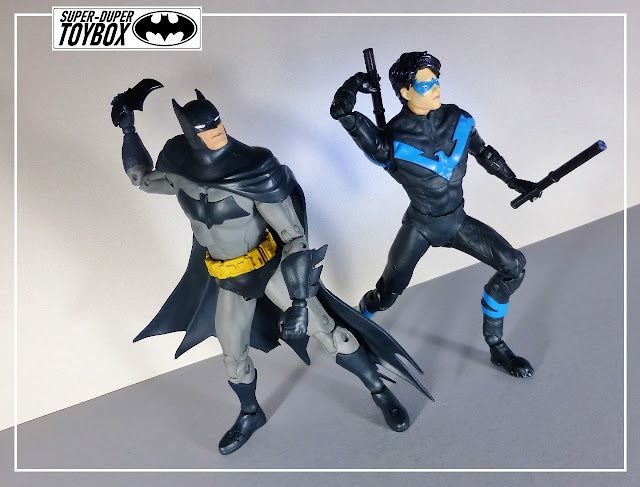 More Later- Make It FUN!
Posted by Super-Duper ToyBox at 10:07 PM No comments: