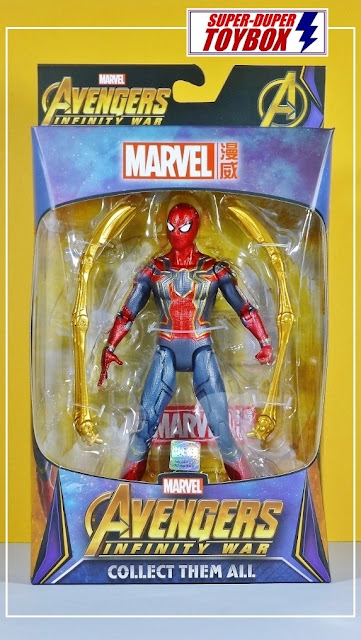 These Chinese market bootleg Avengers Infinity War  Iron Spider figures have been showing up stateside in the last year or more, the market driven by nerds disappointed in Hasbro's failure to include the waldoes on their recent Marvel Legends version. I picked mine up last July from one of the many eBay sellers shipping for south of sixteen bucks. Late to the game, I knew what I was getting into, several YouTube reviews already having been published, and he's about what I thought he'd be. Check out the video:


The articulation is lacking in this bootleg, but the glossy red paint makes him flashy, and the gold highlights and Iron Spider chest insignia sculpt rival the Marvel Legends figure. Hasbro really missed the mark, still not having produced a waldoes-wearing Spidey when we could get a bootleg all the way from China, and import's like S.H. Figuarts and Mafex that include this crucial accessory. Also worth mentioning, the flight stand included with the bootleg is great- Hasbro, take note. 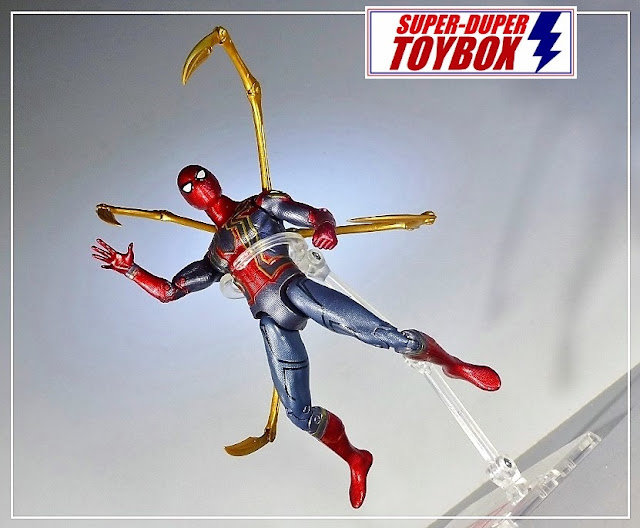 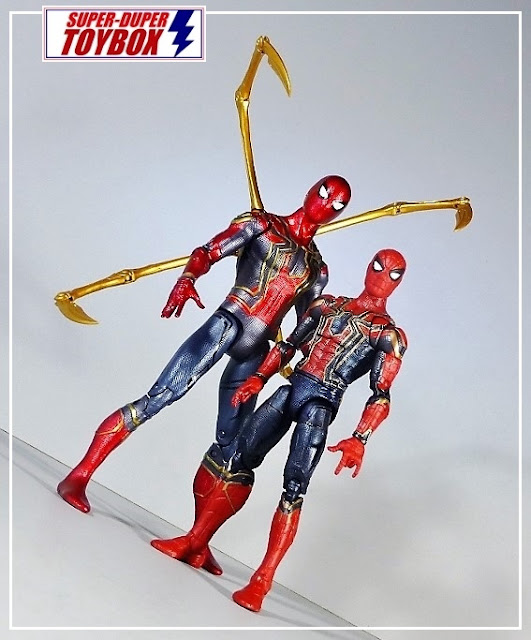 More Later- Make It FUN!
Posted by Super-Duper ToyBox at 8:50 PM No comments: 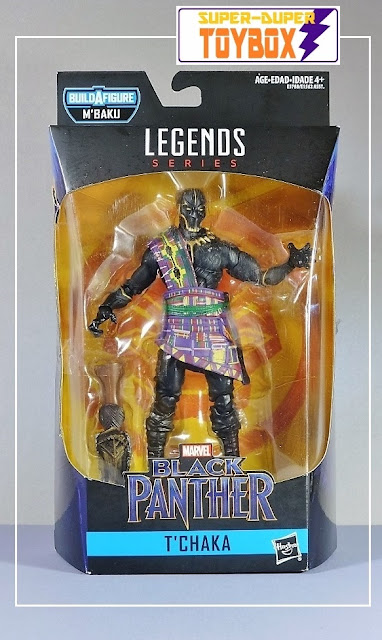 While I like the 2nd Marvel Legends Black Panther Wave, I'm not sure I want to buy them all. T'Chaka was the one I was most interested in, acquiring him through an Amazon Warehouse Deal, shipped to my home for the same price I'd pay at retail. That's assuming I'd see him at all- unlike the first Black Panther Wave last year, I have yet to see the second wave. Some of the figures are fetching a price of ten or more dollars above retail. Mine came with slightly damaged packaging, but I didn't care about that! 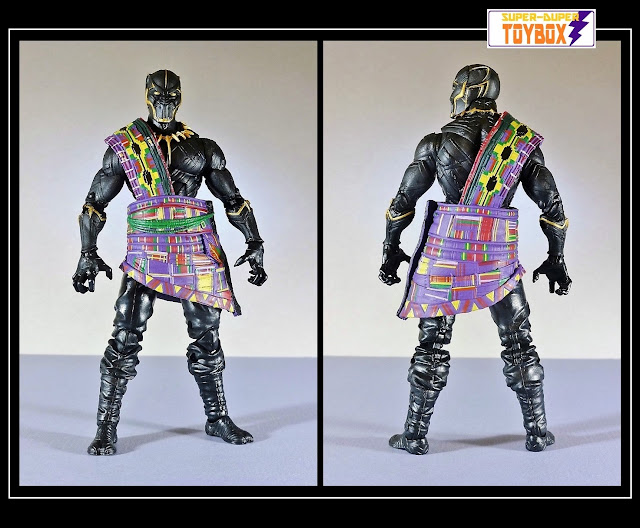 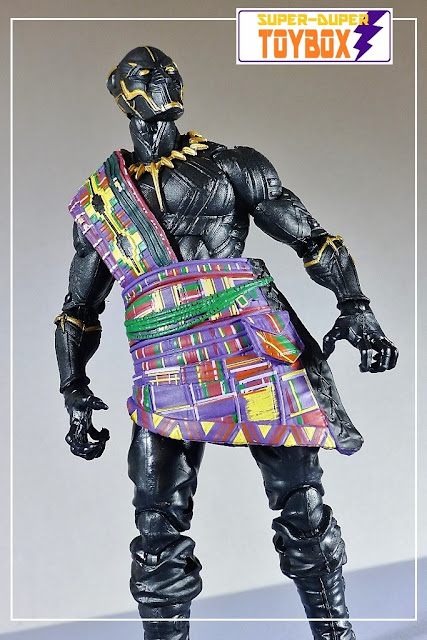 The tribal skirt is the star of this release, but the new head for T'Chaka is nice as well- he's a mix of the Civil War Black Panther, and either Mordo or Dr. Strange for the legs, but it works. 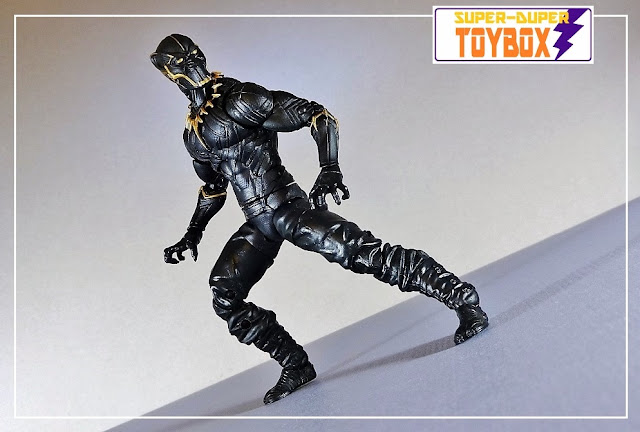 He shares his black and gold scheme with Killmonger from the first Black Panther wave. I may have liked that figure more than the Black Panther. Amazing detail and articulation! Neither of these came with an unmasked head, though we now have a couple Erik Killmonger portraits from other releases. 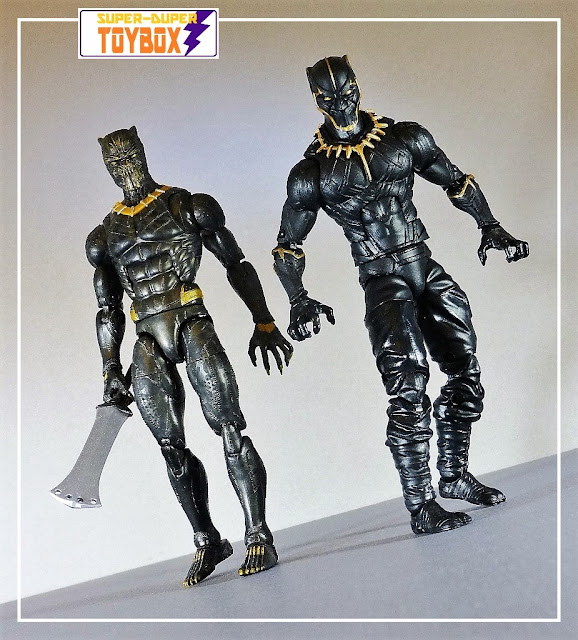 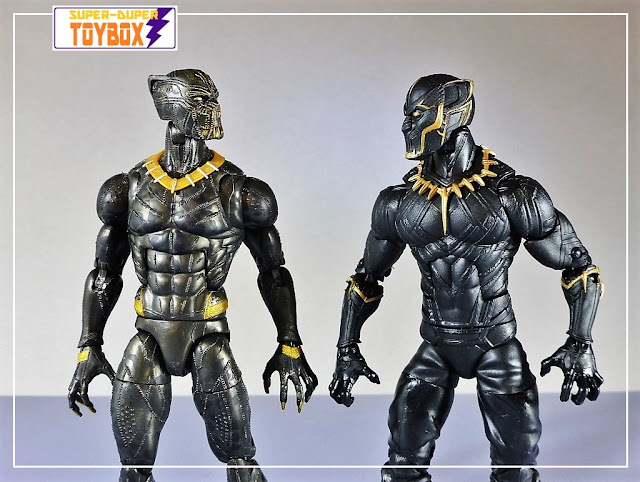 And of course, a shot of T'Challa with Killmonger and T'Chaka is in order. We have been getting some great Black Panther figures from Hasbro in the last couple years, and these are probably the best, certainly in the sculpt, which are beautifully detailed. 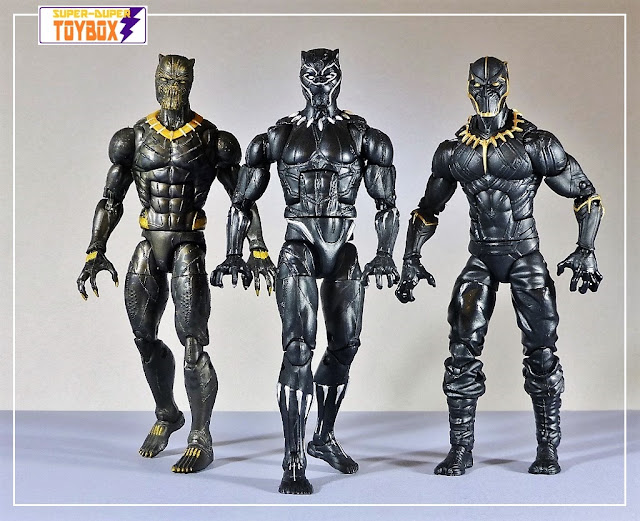 I must say, I wouldn't mind having three of the Dora Milaje figures from this line, with their three head portraits- they'd make a great army build behind Nakia and Okoye from the first Marvel Legends Black Panther wave. Absolutely loved those figures- a beautiful pair! Of note, you can use Killmonger's hands for T'Chaka to grip any borrowed accessory from either waves. 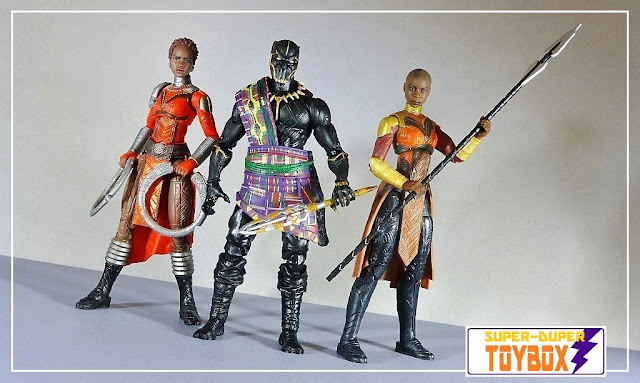 More Later- Make It FUN!
Posted by Super-Duper ToyBox at 11:27 PM No comments: 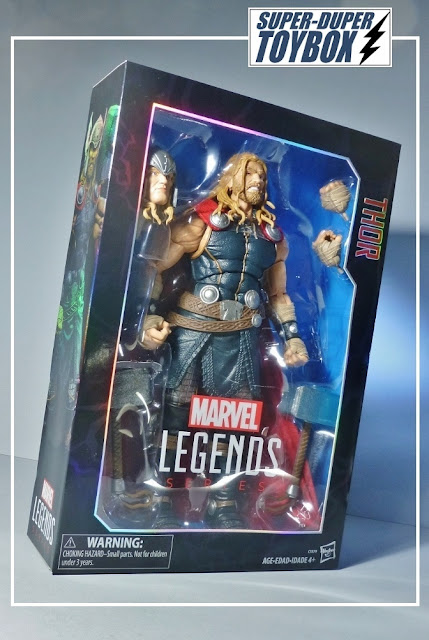 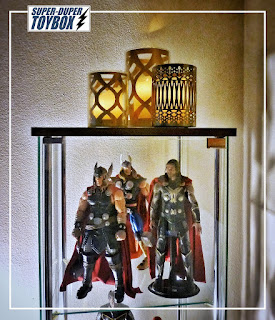 I picked up this Marvel Legends 12" Thor on sale recently with store credit at BBTS, on the hunt for another large scale God of Thunder to round out the top story of the sole detolf cabinet in my living room. He was a good value, complete with a bearded and shorn portrait, both able to accommodate the helmet or braided hair accessories, making four different looks possible. The additional clear blue Mjolnir may be a waste of plastic, but the regular hammer is nice, both made more useful with Thor's vertically hinged wrists on the grip hands. The rest of his articulation is serviceable, if somewhat clunky as larger figures tend to be. Likewise, his weight can overbear the ankles, but you can get him in poses, and fine hasn't faceplanted yet. The cape is one of the main attractions for this action figure, nearly as luxurious as my other two 1:6 scale Thors. Check out the video:

Below, Marvel Legends 12" Thor with Marvel Legends 14.5" Hulk, also produced by Hasbro in 2017. Only two Marvel Legends of this scale were produced last year, and I've not heard any news regarding plans for the future of this line. The demographic for this larger, more expensive action figure is smaller, perhaps limiting Hasbro's ability to make the kind of profit they are used to- retail pegs can accommodate more of their 6" line, and their library of molds/tooling is larger, making reuse of parts easier. I'd like to see more of these produced, starting with some females and villains, but the ten we received may have just been a gift. And what a gift they were. 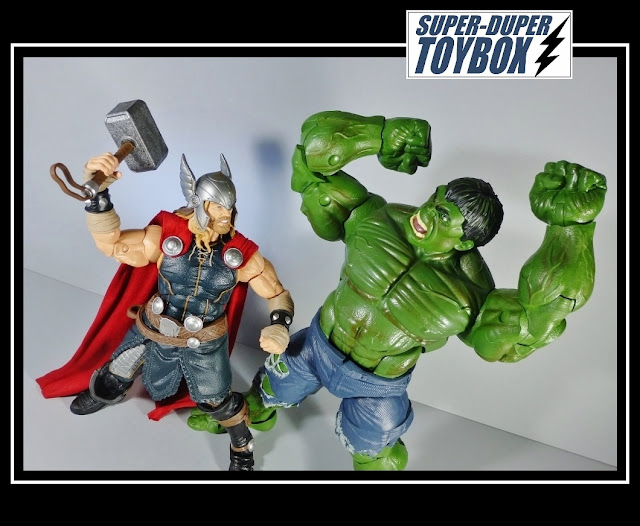 More Later- Make It FUN!
Posted by Super-Duper ToyBox at 8:29 PM No comments:

It's that time of year again to clear out some inventory from the Super-DuperToyBox! Click the eBay Clearance Sale badge at the top of the right sidebar of this blog to bid on some great Imaginext minifigs, MiniMates, and more! Hurry- the bids are already popping up due to my low pricing! Follow the Super-DuperToyBox Instagram to see live updates on a few of the items as they are going up for auction: 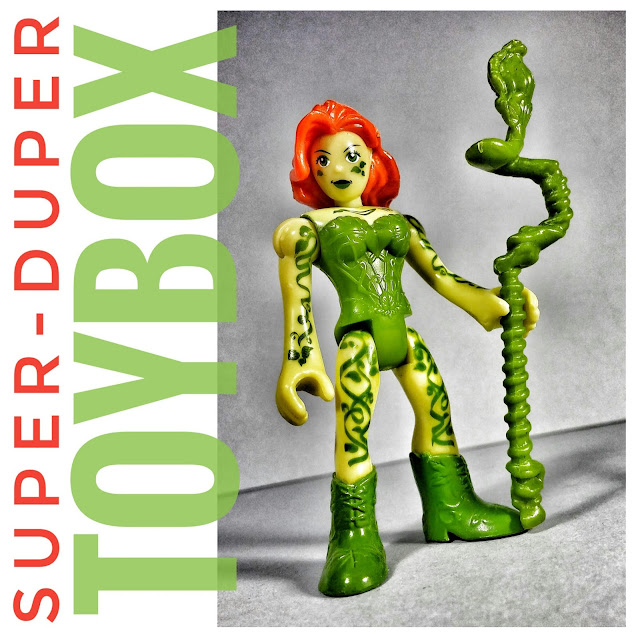 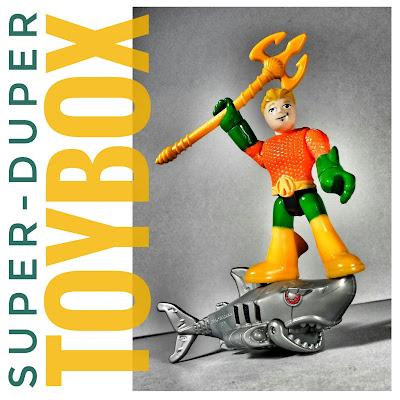 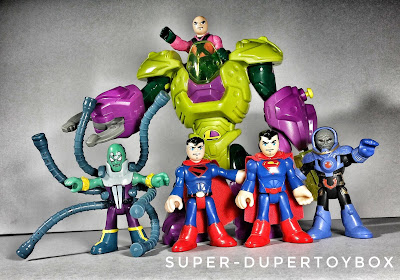 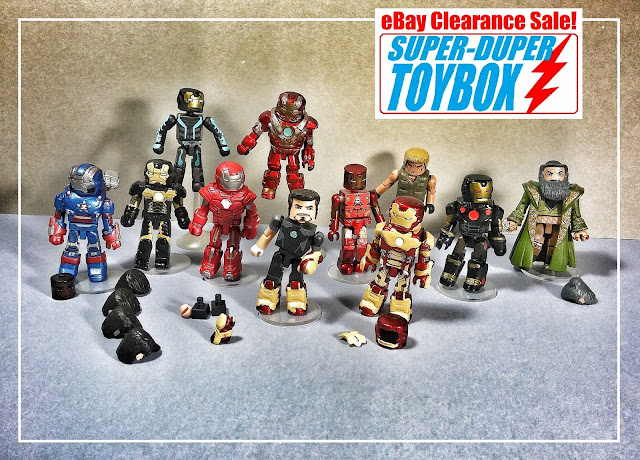 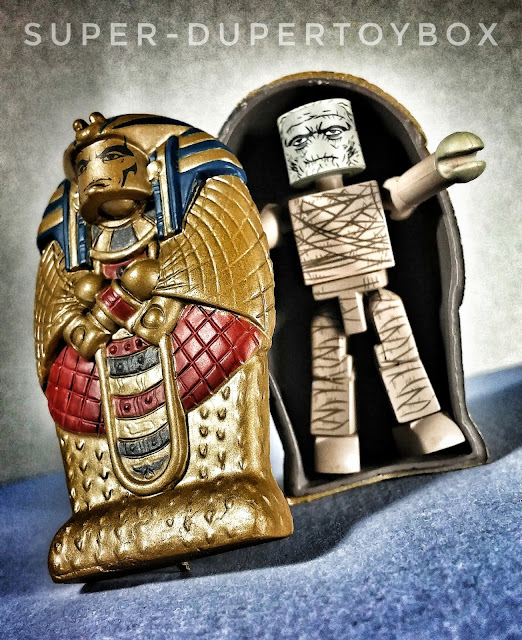 More Later- Make It FUN!
Posted by Super-Duper ToyBox at 11:48 AM No comments: 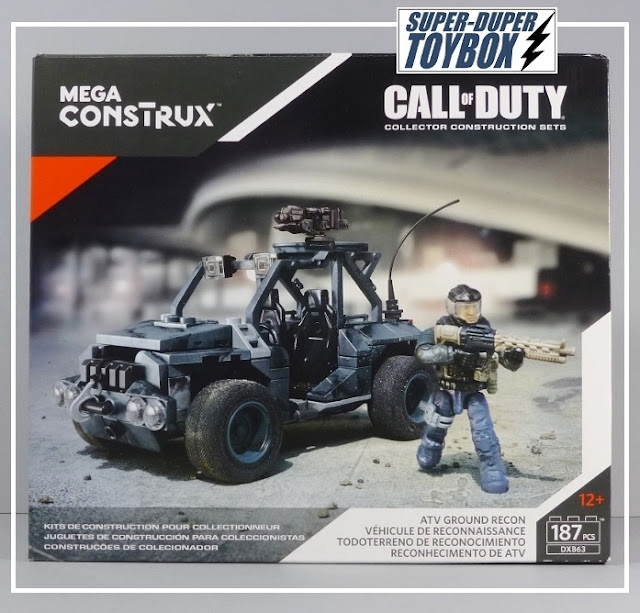 I found this Mega Construx set at a local Marshalls a couple weeks ago for 60% off the original retail price- more like what it should have been priced originally. While $0.10 + is below Lego's average price to parts ratio, it seemed a little overly ambitious somehow. Regardless, it's a wonderful little build that I loved to find at such a great discount. Check out the video:


The working wench that spools under the hood and artillery gun that slides along a rail atop the roll cage make this little ATV extra special! I also like the unconventional color scheme of gray and midnight blue. Nice tires! I heard a few gentle complaints regarding the microfig, but I enjoyed getting another grunt. Pick this up if you see it on sale for sure! 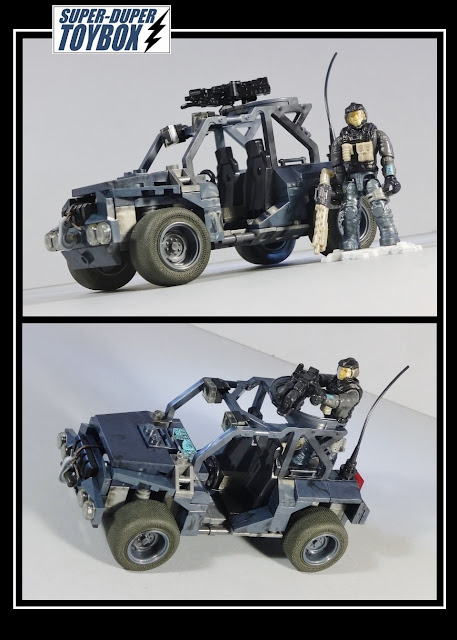