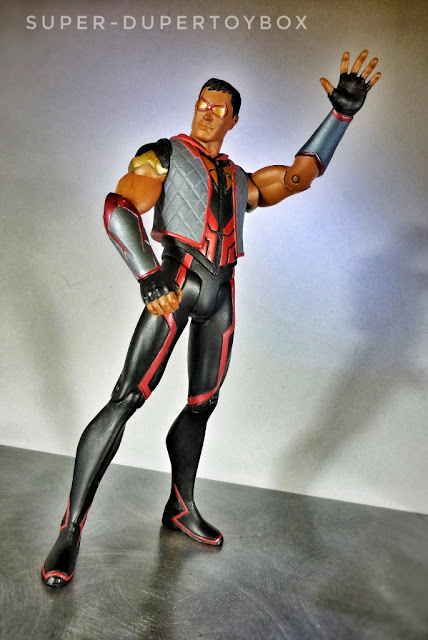 Another recent eBay find, DC Collectibles Vibe, another New 52 action figure from what I feel was a great moment in the line. For two or three years there around 2011 - 2013, DC Collectibles was making some beautifully sculpted action figures with nice paint apps. I bought several of the New 52 Justice League figures, and what they lacked in articulation was doubly repaid in aesthetics. I picked up the first issue of Vibe's New 52 solo title in February of 2013, and while I didn't stick with it, I did read more issues of different titles relaunched by DC around the sane time. I will say DC Collectibles did a commendable job capturing the character's look, producing a detailed figure with lots of great incised sculpting throughout Vibe's outfit. 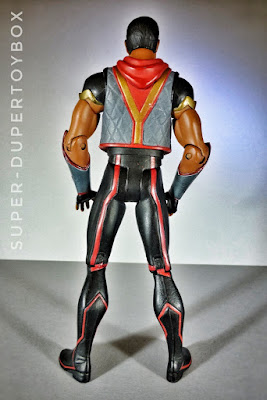 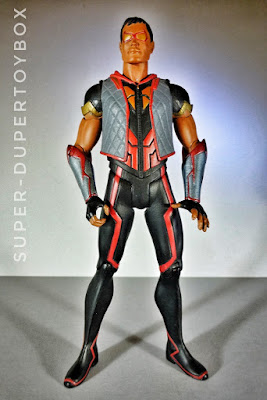 Vibe's shoulders are mounted only to a swivel, no hinge to facilitate lateral articulation, and he has nothing in the waist. He utilizes DC Direct's classic Y-hinge at the hips, allowing only forward and back movement, but these figures have always been about aesthetic with less joints to break up the sculpt. While I enjoy a figure with expanded articulation, I do appreciate the beauty of these. 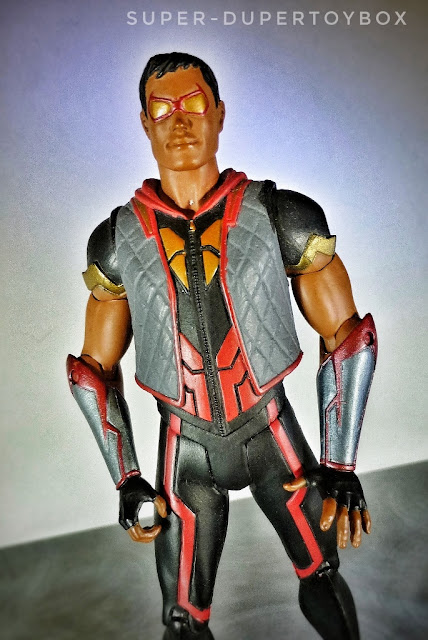 Vibe appeared first in Justice League of America in 1984, the first member of that team to be killed in action. He appeared in Blackest Night as a Black Lantern, but was retconned with the DC New 52 reboot, Cisco Ramon gaining his vibratory powers while being pulled from the event horizon of a boom tube by his brother, who was subsequently killed. Hence the impetus for Cisco becoming the hero Vibe. 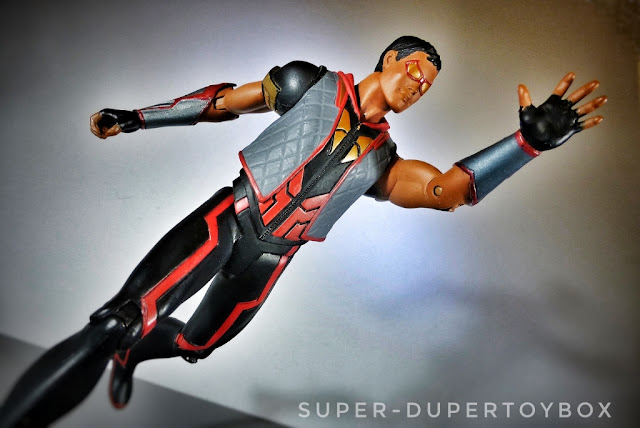 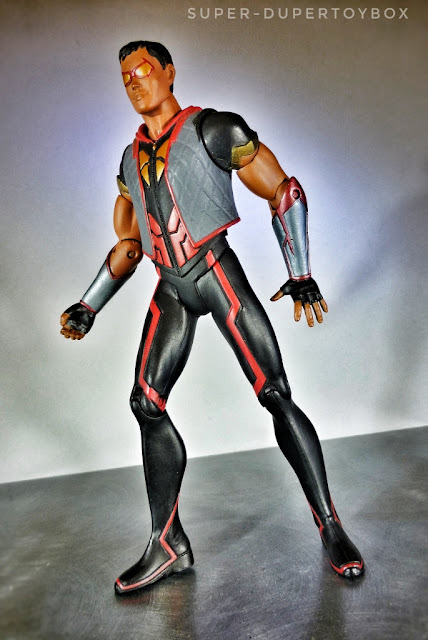 Below, Vibe with the DC Collectibles Katana, another figure that came only in a 2-pack (Vibe w/Flash, Katana w/Wonder Woman). Like Vibe, Katana was reintroduced in the New 52 relaunch, and also enjoyed ten issues of her own solo title, starting in February of 2013. 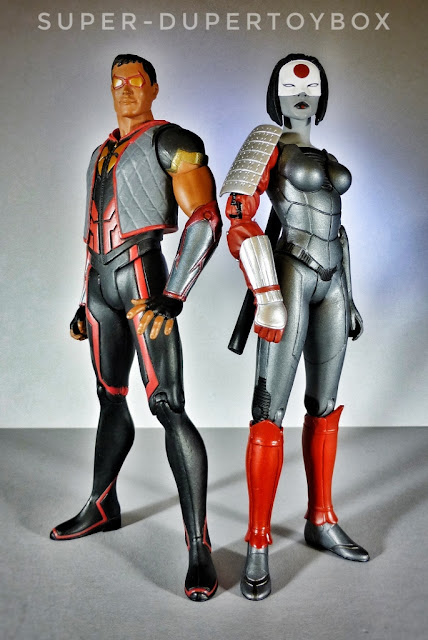 More Later- Make It FUN!
Posted by Super-Duper ToyBox at 9:32 AM No comments: 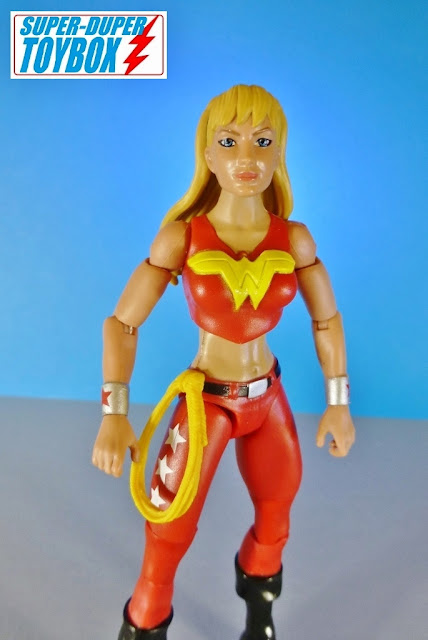 This DC Multiverse Cassie Sandsmark was another eBay find, a figure I was curious about but not willing to pay retail for. As stated in my last post, I was a big fan of Mattel's DC Universe Classics, and the DC Mutiverse line is essentially an extension of that with the TV and movie characters mixed in. 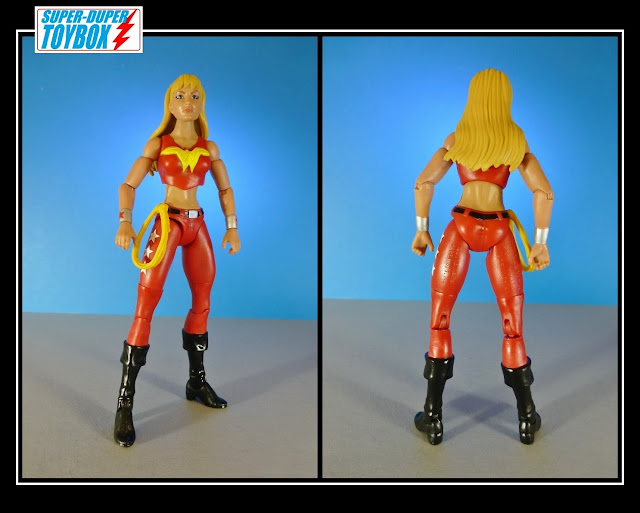 Female DCUC figures had notoriously poor abdominal articulation, and Cassie is no different, the swivel at her midriff offering not much beyond ten or fifteen degrees of lateral shift. Few of these figures have double joints in the elbows or knees, or rocker joints in the ankles either. Mattel hid the pins at the elbows and knees, but the shoulder joints are more pronounced on this figure than any of the past DCUC figures I remember. That said, I enjoy the DCUC aesthetic still present in many of the comic-based DC Multiverse figures. 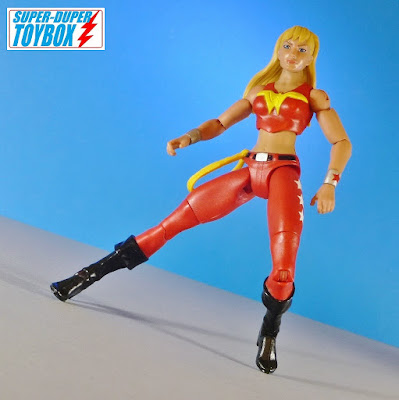 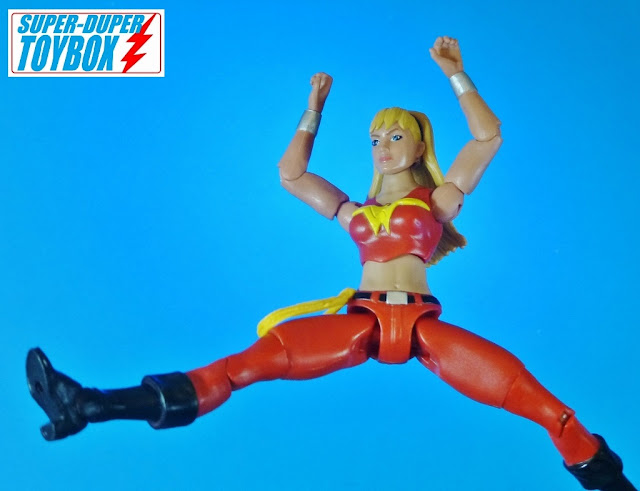 I feel my interest in Cassie is due in part to fondness for my DCUC Donna Troy, who shares similar design elements. I love the stars incorporated in the outfit and bracers like Donna, together in red with black boots make for quite the pair of warriors. Cassie made her firsr appearance in January 1996, Wonder Woman #105, 31 years after Donna graced the pages of DC Comics. My experiences with the character are limited mostly to Infinite Crisis, which found her lamenting over Conner Kent's body, murdered by Superboy Prime, but she was reintroduced in the New 52 relaunch as well as the more recent Rebirth relaunch. Read more about Wonder Girl at the DC Database! 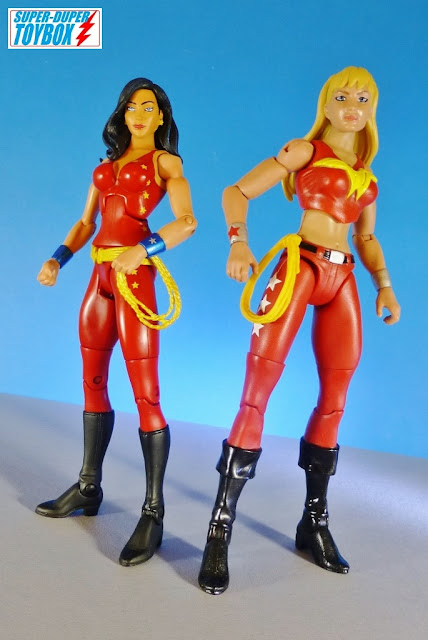 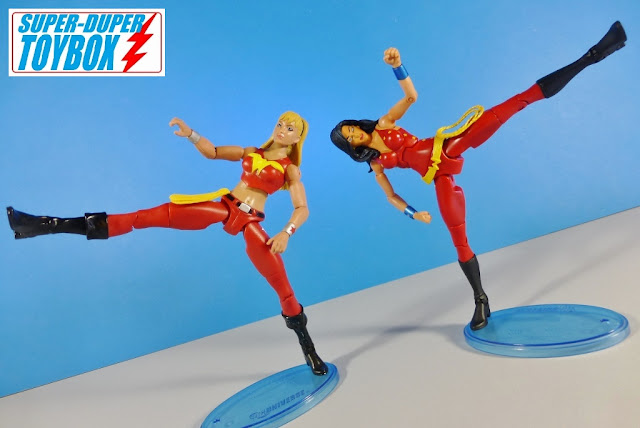 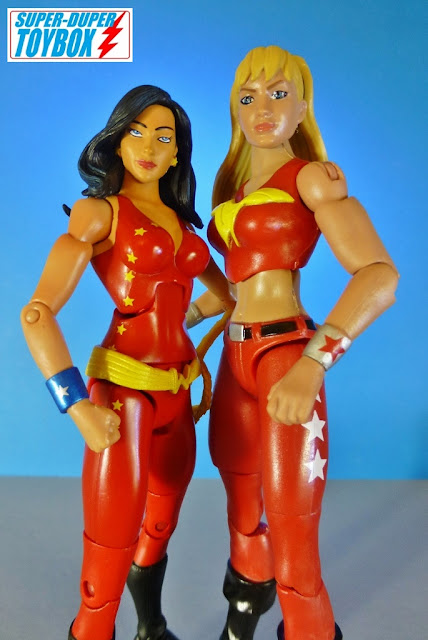 More Later- Make It FUN!
Posted by Super-Duper ToyBox at 10:11 PM No comments: 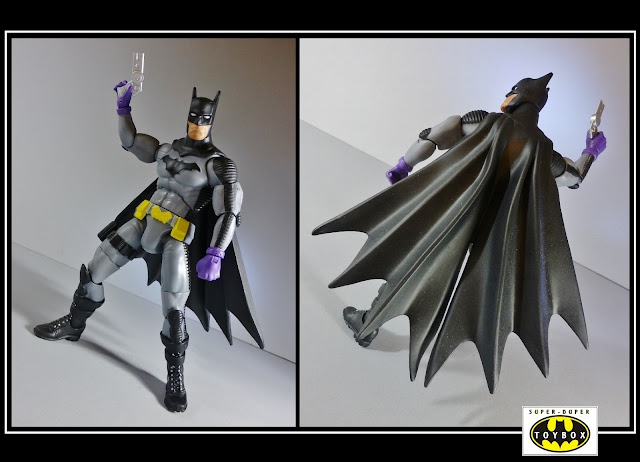 I scored this DC Multiverse Zero Year Batman off eBay this past summer at a greatly discounted price, curious about some of the Mattel figures that have passed me by the last couple years. I really enjoyed Batman: Zero Year back in 2013, and it's hard to believe how fast the last five years have flown past! A funny aside regarding this action figure: I have the DC Collectibles version of this Batman (pictured to the right), a gift from Kevin Kiniry after receiving an Earth 2 Hawkgirl with two left hands. It has more accessories than the Mattel Batman and a more Capullo-inspired portrait, as expected, but I was a big fan of the DCUC line, for which this figure's styling pays tribute. Mattel can't seem to compete with Hasbro in the 6" scale these days, their Marvel Legends line continuing to surpass in articulation and aesthetic, but I like this Batman well enough. 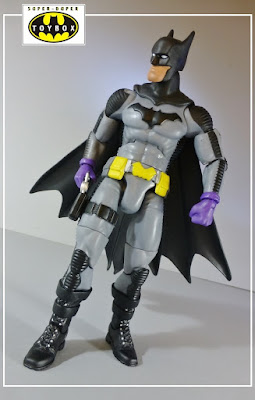 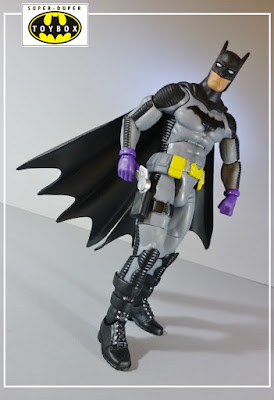 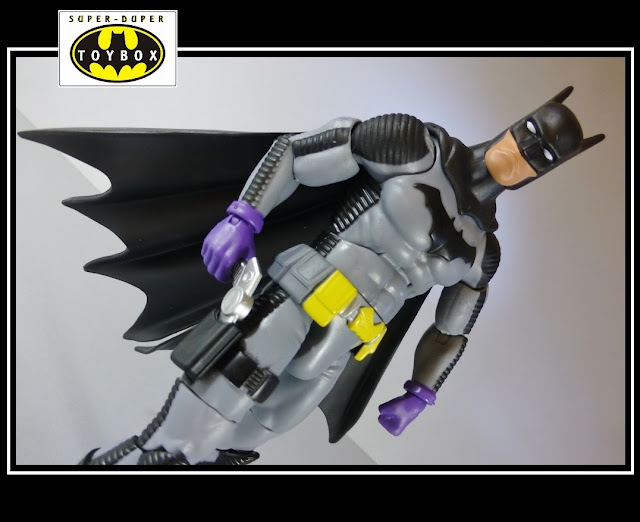 Mattel never really got back to a generous accessory count with it's 6" figures, but we did get a grapple gun, which though somewhat flimsy does fit neatly into it's holster strapped to Batman's thigh. Their failure to include just a couple batarangs may have stalled my retail purchase a couple years ago and cost them a sale ultimately, a far heftier price than a two slivers of plastic. 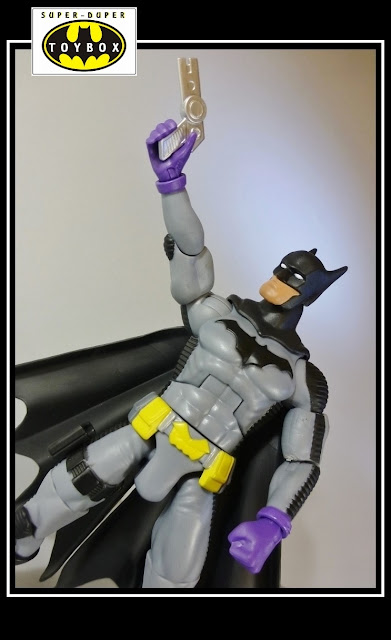 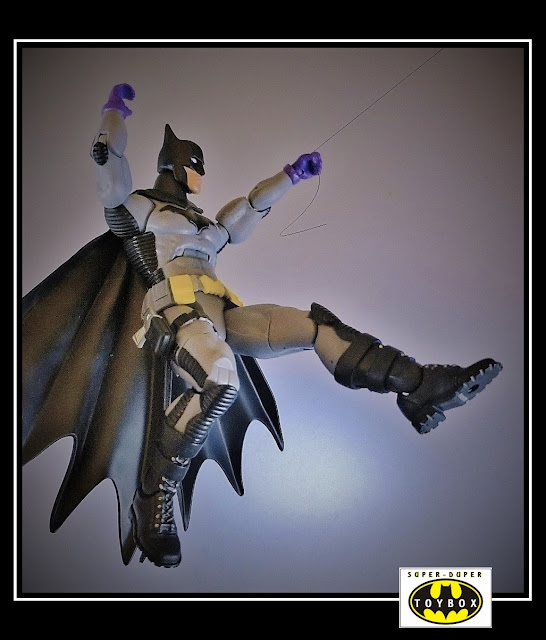 No development in range articulation from DC Universe Classics to the Multiverse line, but the hips on this particular figure has changed from the more typical, gappy DCUC joint that irked some action figure collectors a decade ago. Mattel has covered the pins at the elbows and knees, but I may have preferred double hinges there instead, or a hinged neck and ankle rockers. That said, if you are a fan of DC Universe Classics, this will likely do it for you- it does for me in some regard. I would have loved this figure as a kid, and I do really like the clean paint and sculpt details throughout. It's a cool Batman. 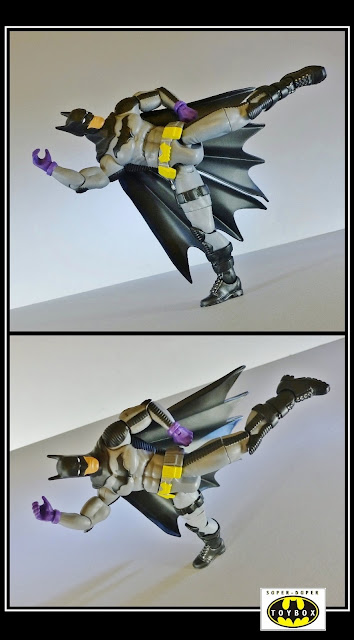 Below, Zero Year Batman with Mattel's more recent, and somewhat smaller DC Multiverse Rebirth Batman, both sporting a flash of purple in their outfits.  Zero Year Batman's purple gloves are an homage to the vigilante's first appearance in Detective Comics #27 from 1939, writer Scott Snyder and artist Greg Capullo's redefining Batman's origins post-New 52 relaunch. Though I didn't keep up with DC into 2016, consequently missing DC Rebirth, I'm unsure how I feel about DC Comics constant need to upend continuity only a few years after New 52. Regardless, Mattel's DC Universe Classics really got me into 6" action figures shortly after starting this blog eight years ago, and I have a soft spot for that style- especially in a Batman figure. 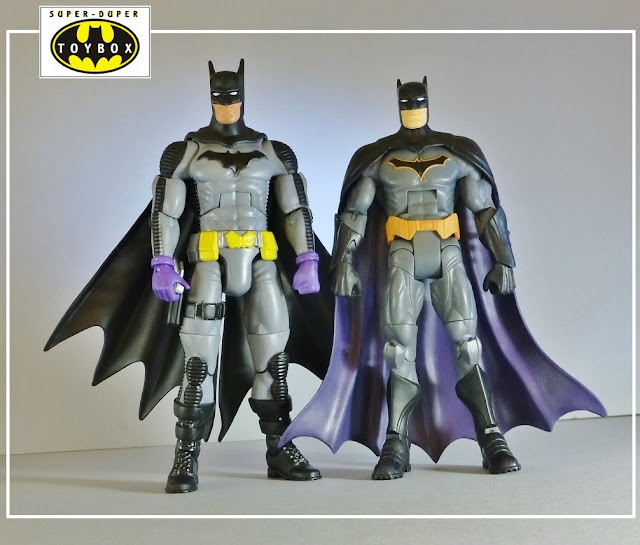 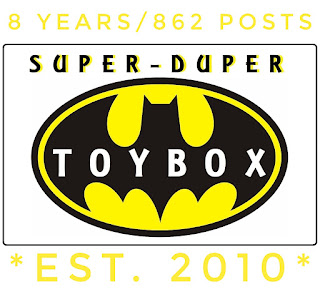 Posted by Super-Duper ToyBox at 11:10 PM No comments: 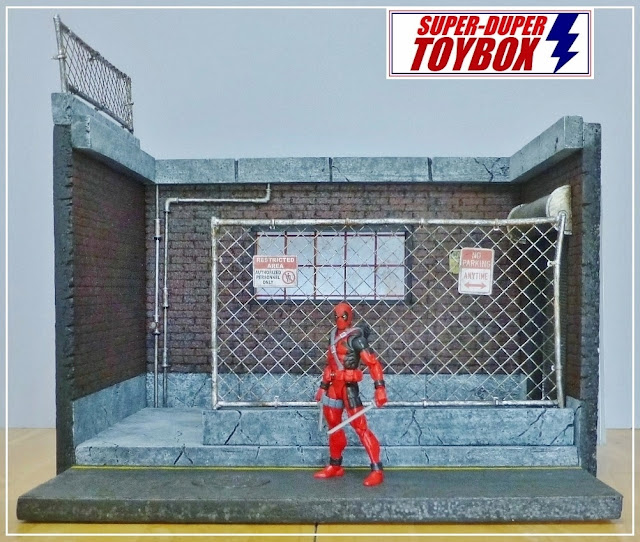 Seeing all the fantastic dioramas used by some of the ACBA artists on Instagram inspired me to test my mettle in the craft. My original intent was a wall or two with a door, which evolved into what you see above, measuring 21 x 21, 14". I thoroughly enjoyed the process and want to try another, perhaps to sell. Check out the video for a closer look:

The scale of this roomy diorama roughly approximates 1:12, perfect for
6" action figures like Marvel Legends Deadpool and Colossus... 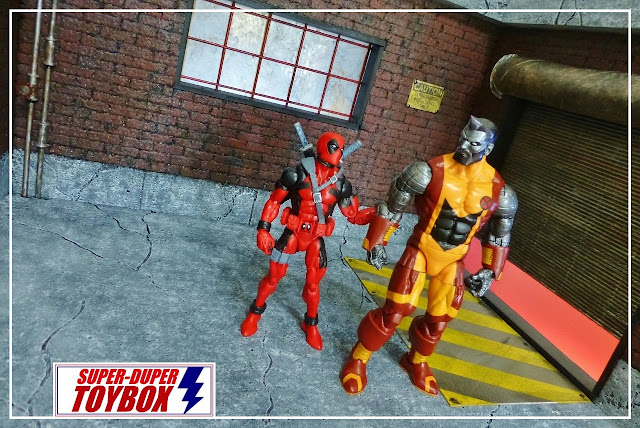