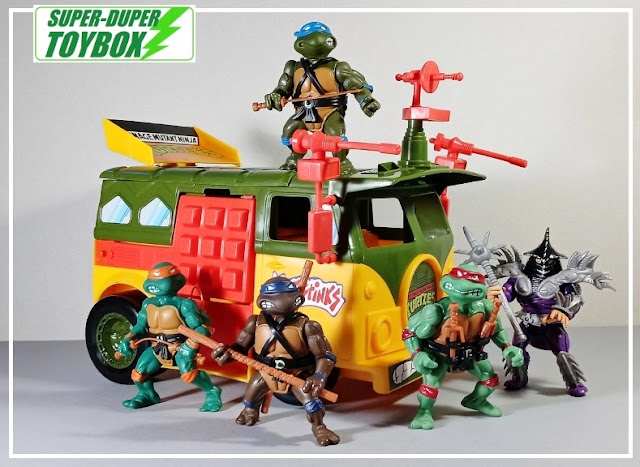 There aren't a great deal of posts on the Super-DuperToyBox about the Teenage Mutant Ninja Turtles because I had moved on from toys before Playmates dropped their first TMNT figures back in 1987. While I don't have the kind of nostalgia for them as I do for Masters of the Universe or Mego figures, these reissued retro figures are fun and fit in with some of the other more "toyetic" items in my collection. Check out the video: 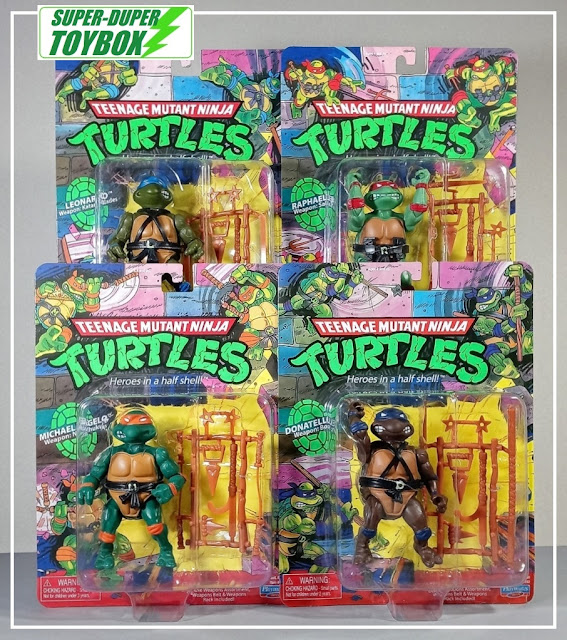 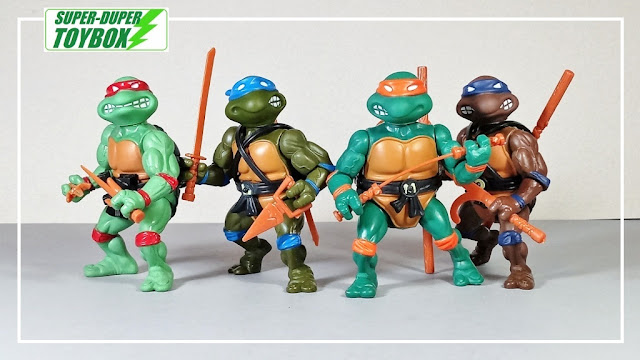 I picked up some more contemporary TMNT figures at a discount outlet a couple years ago from a 2012 line of toys also produced by Playmates. These newer figures have better articulation and detail, but there's no deying the charm of the retro-styled figures... 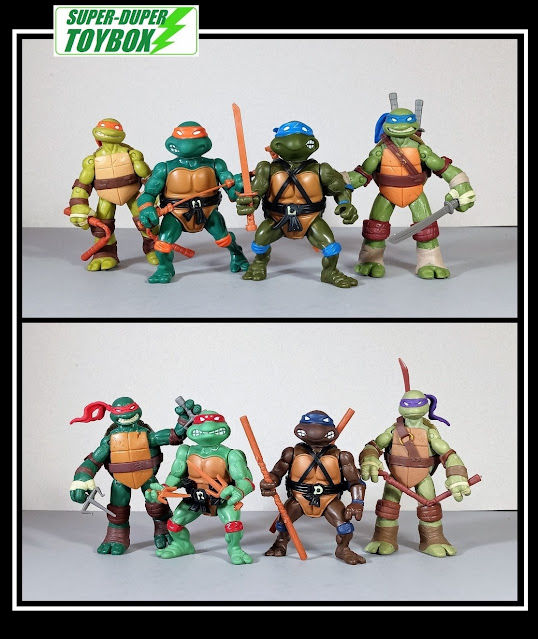 There were a handful of figures released with the "Movie Star" sub-branding last year, including a Super-Shredder that looked almost identical to his '90s counterpart. I felt it was important to have at least one villain for the Turtles to battle, and this Shredder fits in great... 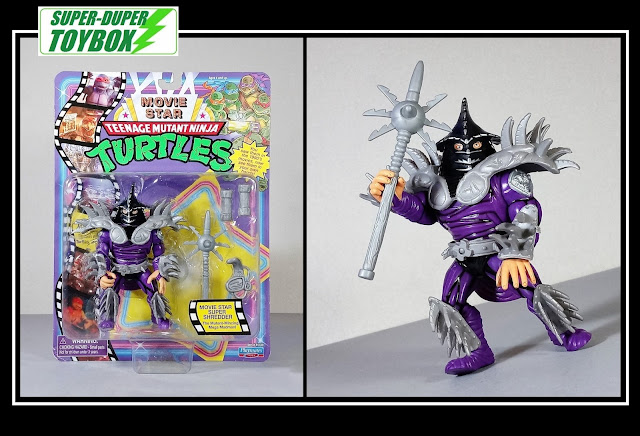 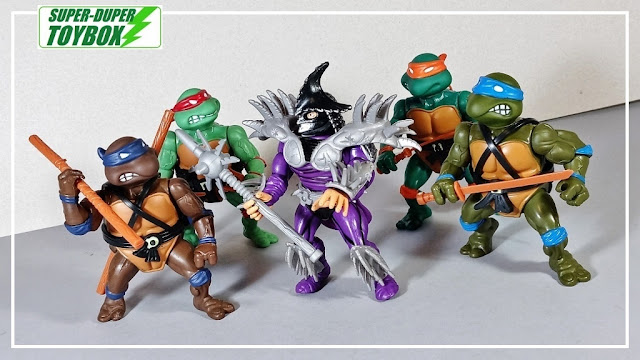 Having the Party Wagon to go with the Turtles really makes the whole thing fun though! Be sure to check out the video to see the spring-action Foot Tenderizer and Whacko Bombs in action. It seats six figures comfortably! 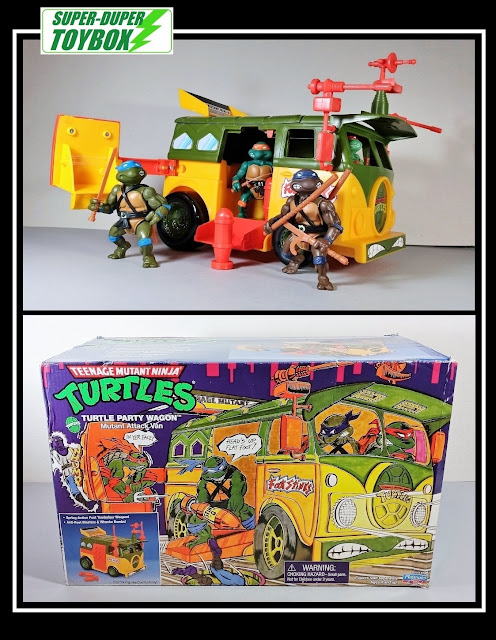 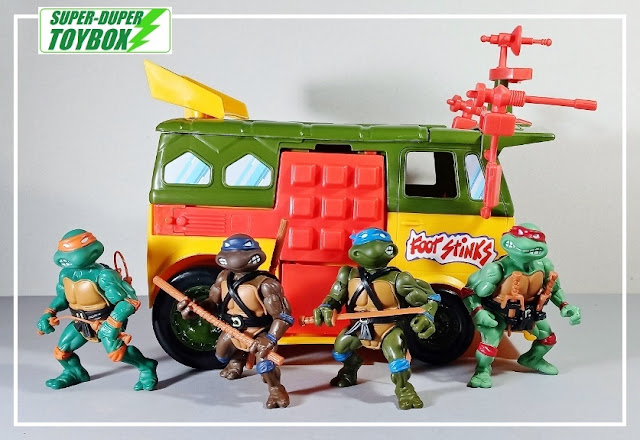 Follow the Super-DuperToyBox on Instagram!
More Later- Make It FUN!
Posted by Super-Duper ToyBox at 11:07 PM No comments: 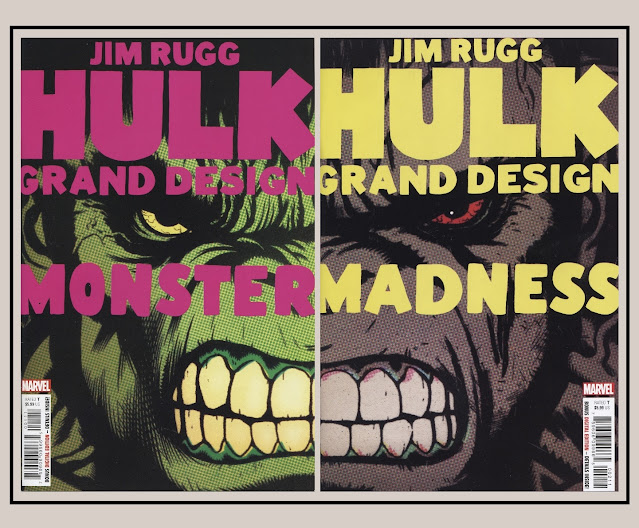 I was pretty excited about artist Jim Rugg's Hulk: Grand Design upon solicitation, a fan of the character since childhood. I've said before that the CBS TV show starring Bill Bixby opposite Lou Ferrigno was a defining moment in my Hulk fandom, preceded by my Mego Hulk action figures, both 8" and 12", and strengthened by the Hulk comics I read thereafter. "Marvel's TV Sensation" was stamped on new books, reprints, and the avalanche of other product solicitations. I enjoyed Rugg's 2020 independent release of Octobriana 1976. but Hulk: Grand Design was several levels beyond that, taking on the history of the character, at times deftly assuming the styles of some of the greatest artists ever to have worked on him. 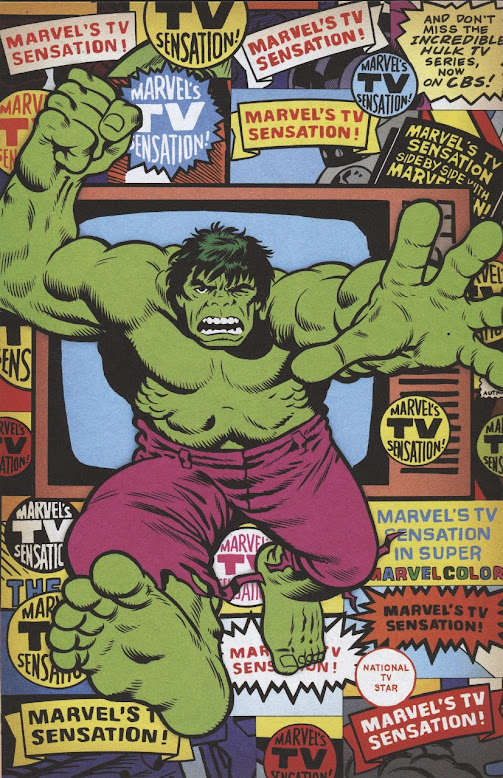 Two of the stories noted in Hulk Grand Design: Monster link directly to the Hulk comics of my youth and are reviewed on this blog, Hulk #124 and Incredible Hulk #141, telling the sad story of Bruce Banner and Betty Ross' ill-fated wedding, and the Hulk's jealous battle versus Doc Samson! 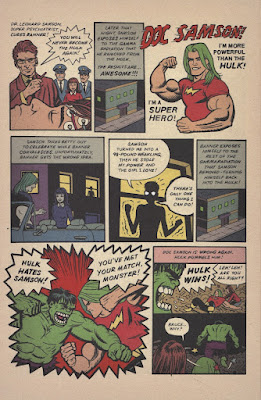 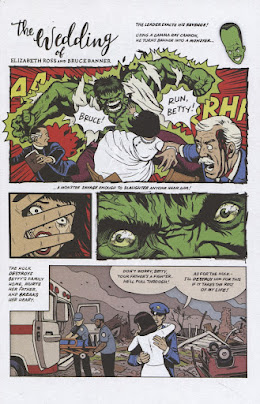 Many stories involving Betty Ross, daughter of Hulk's arch-nemesis General Thunderbolt Ross, pepper the character's history and source of his loneliness and misunderstood state of being... 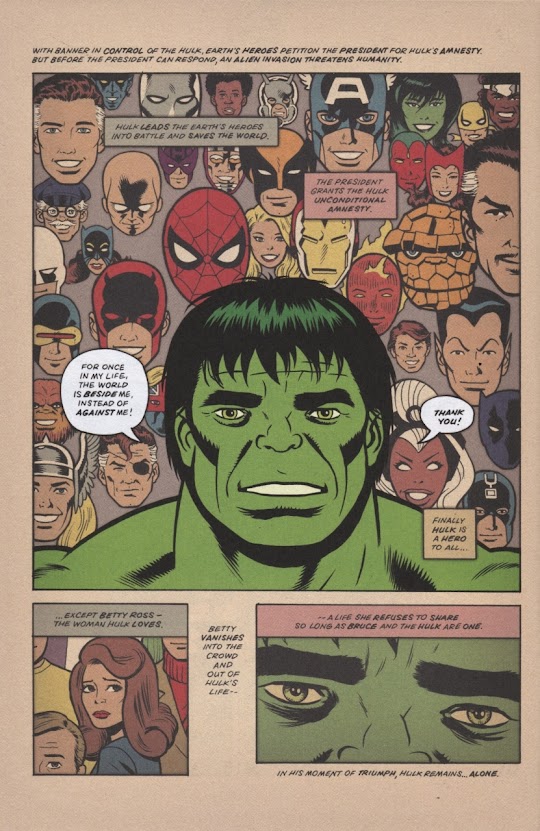 The rapid-fire assault of visual delights never let up throughout Monster, Jim Rugg personalizing the art style at times, such as the ballpoint pen homage to Incredible Hulk #181, introducing alpha Marvel character, Wolverine... 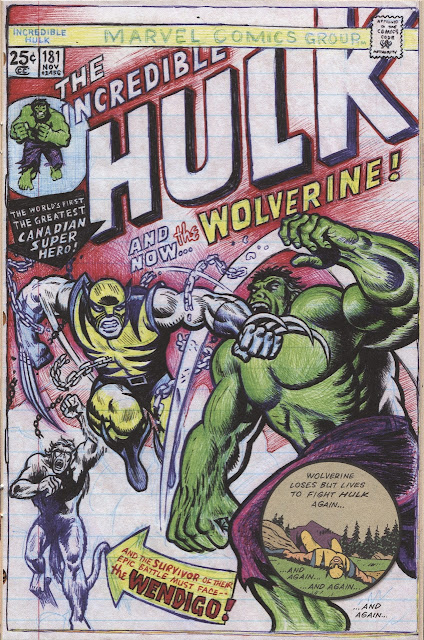 The second book, Hulk Grand Design: Monster deals with some story arcs I'm less familiar with, like the Peter David run, but I had managed to catch a few issues starring Mr. Fixit, the Hulk's smarter, gray version, at the end of the '80s. 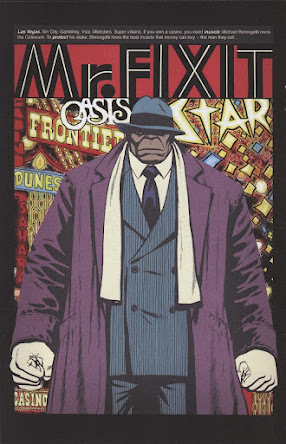 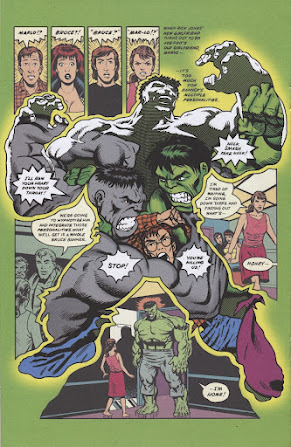 Hulk Grand Design: MADNESS ends in an epilogue covering Planet Hulk and World War Hulk, both I enjoyed tremendously. While I've enjoyed Hulk stories that came after these two, particularly Indestructible Hulk, his latest, critically acclaimed incarnation in Immortal Hulk is missing from the Grand Design story - I realize there was a conscious decision where to cut off, and though the aforementioned epilogue seems like a good spot, Immortal may have been a better epilogue due to its ongoing popularity, portraying Hulk as a monster in a horror comic. 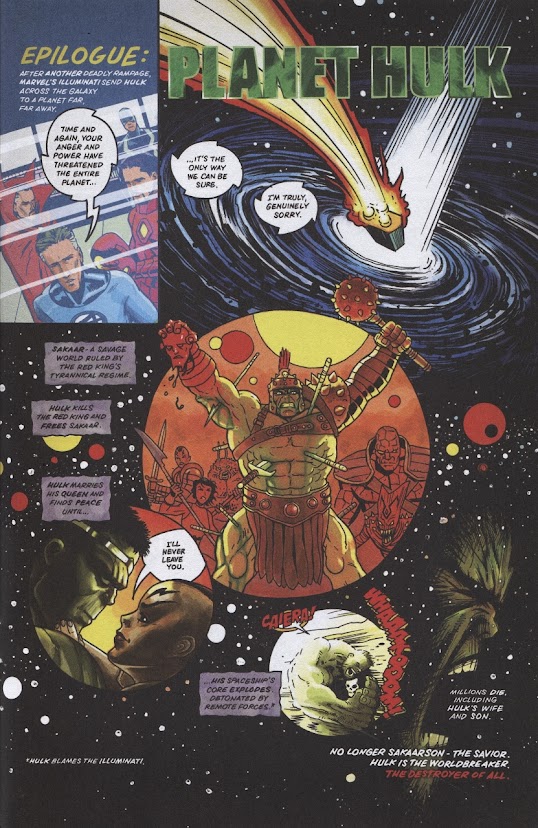 Regardless, I found Hulk Grand Design to be a fun romp through the Hulk's history that I'd recommend to any longtime fan, or new readers to get a broad overview of the character. There are just so many Hulk stories- it would be impossible to get it all in 88 pages. You will find yourself thumbing back through it for the visual delight it is, and for $5.99 each, they are a great value. Jim Rugg is a fantastic cartoonist with a wide range of talent this format showcases wonderfully. 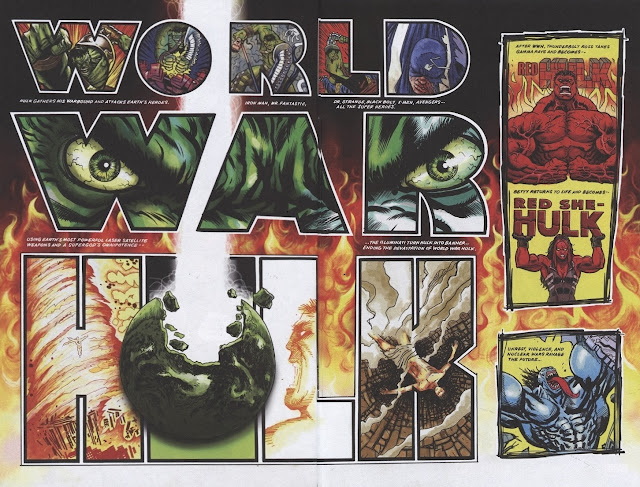 Follow the Super-DuperToyBox on Instagram!
More Later- Make It FUN!
Posted by Super-Duper ToyBox at 11:13 PM No comments: