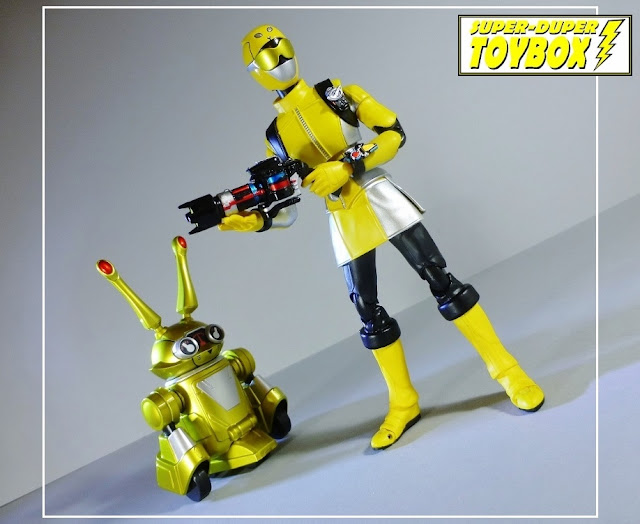 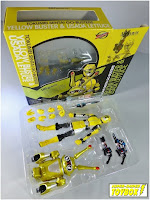 I had been on the lookout for a yellow Ranger/Sentai, and while I likely know even less about Go-Busters than I do the domestic Power Rangers franchise, I am loving these SH Figuarts Sentai figures. The flawless paint, fluid articulation, and great accessories are several steps above what we see here on the American retail market. According to Wikipedia,  Tokumei Sentai Go-Busters debuted in Japan on Feb, 12th, 2012, and began airing in South Korean as Power Rangers Go-Busters the following year. Three children gaining super powers from an accident at the Energy Management Center have sentient robot partners called Buddyloids, in Yoko Usami's case the Usada Lettuce mecha, in matching color and rabbit theme. Check out the video: 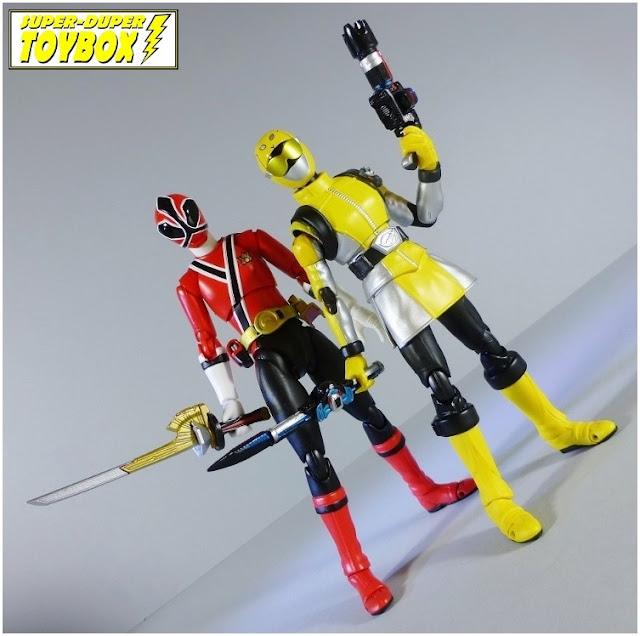 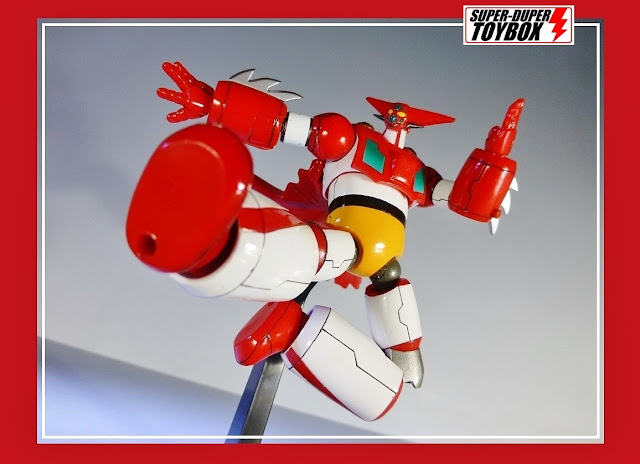 I've collected some Transformers in the last year, so this Revoltech Getter was a natural evolution in regard to my interests. I got him used at a great price with free shipping off eBay a couple months ago, my first Revoltech, fascinated by his dynamic articulation, fun design, and great accessories. Double assault rifles and tomahawk! Check out the video: 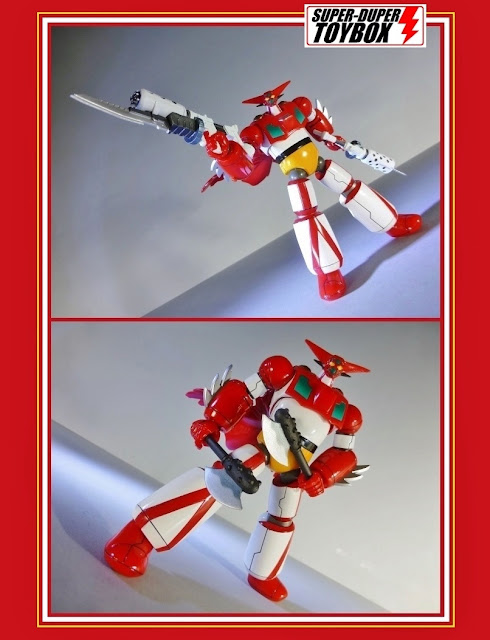 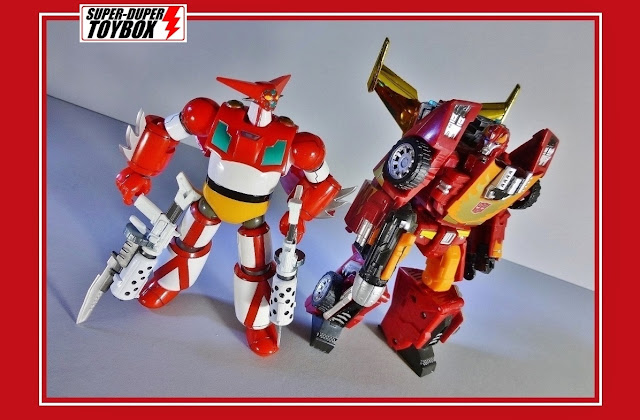 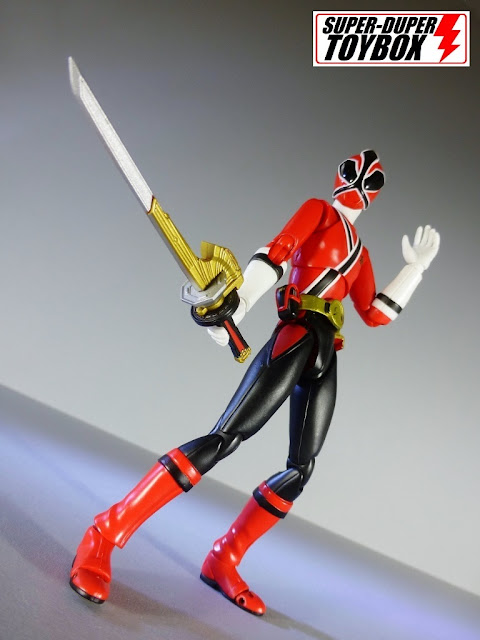 When you've experienced the difference in an SH Figuarts, it's mildly difficult to pay attention to domestic action figures. I mean, wow... just wow. Sure, the exotic appeal of characters unfamiliar with a slender physique (as opposed to exaggeratedly musclebound) is refreshing, but the naturally fluid articulation, generous accessories, and perfect paint apps are commendable. Peerless, for that matter. You can get most of the red Ranger/Sentai varieties at pretty reasonable prices on eBay and Amazon, the other colors, and particularly the female characters, seem to demand higher prices. Check out the video: 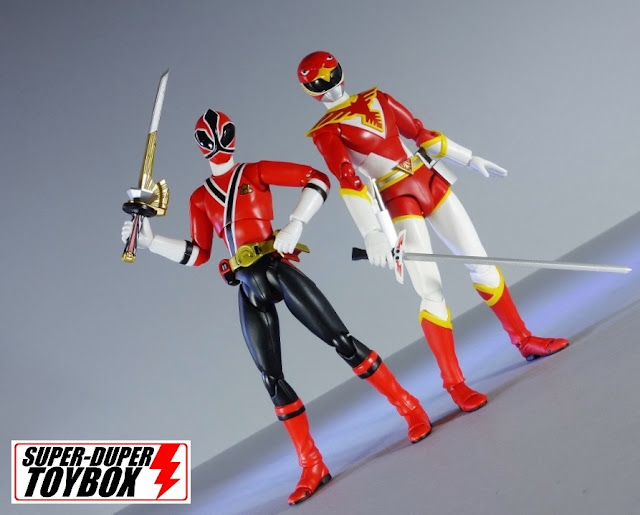 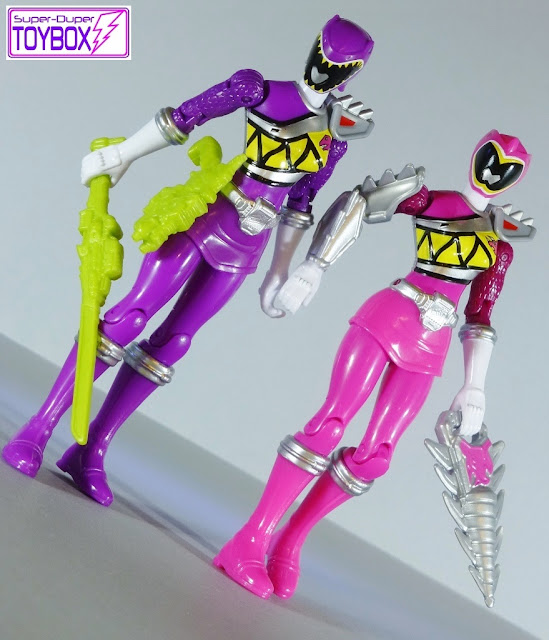 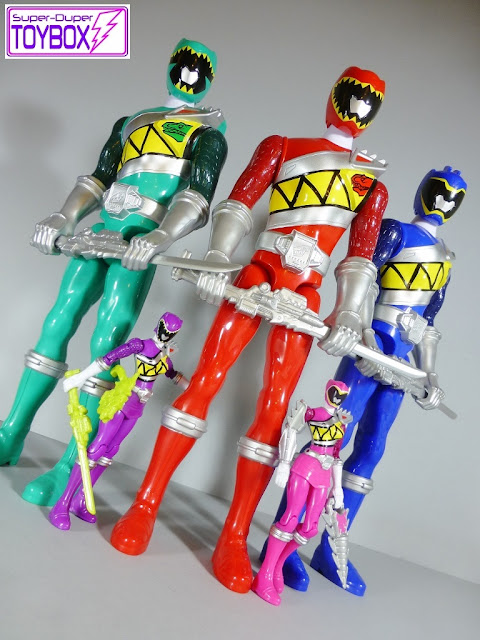 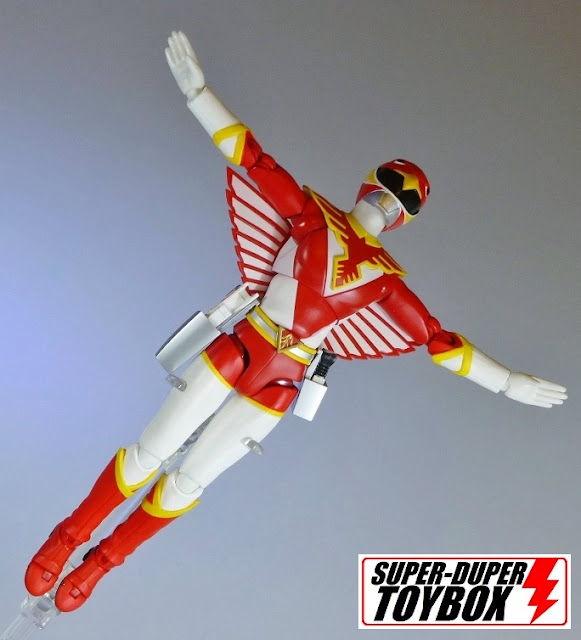 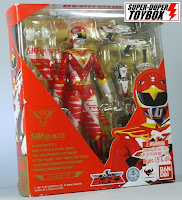 I've become a fan of the SH Figuarts line by Bandai, particularly the tokusatsu inspired characters of Japanese sci-fi such as Ultraman, Kamen Rider, and Super Sentai- the inspiration for the Power Rangers. I realize I'm pretty far behind the curve, but am glad I discovered these amazing action figures. Aside from their supernatural articulation, the paint applications are flawless, and I appreciate their slender build. Accessories are off the charts with these Figuarts action figures, which will take some care in keeping track of, but opens up the posing opportunities significantly. I'm a novice on Super Sentai/Power Rangers, so some of the weapons look bizarre to my eyes, but I suppose their exotic styling is part of what appeals to me. Check out the video: 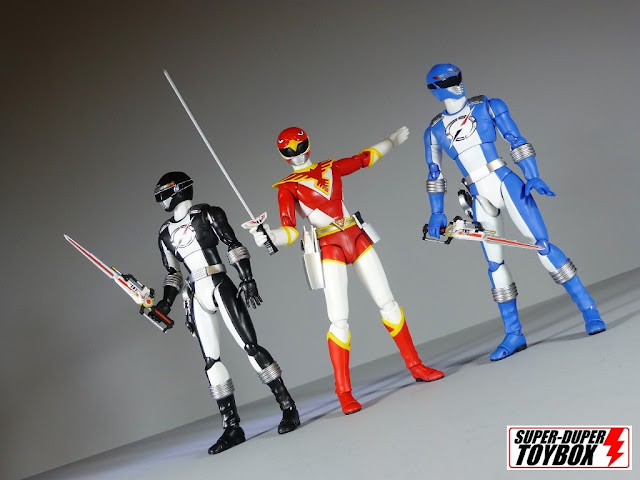 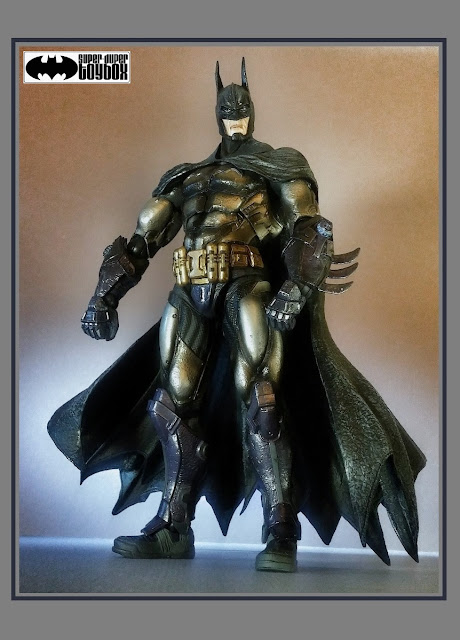 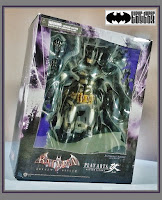 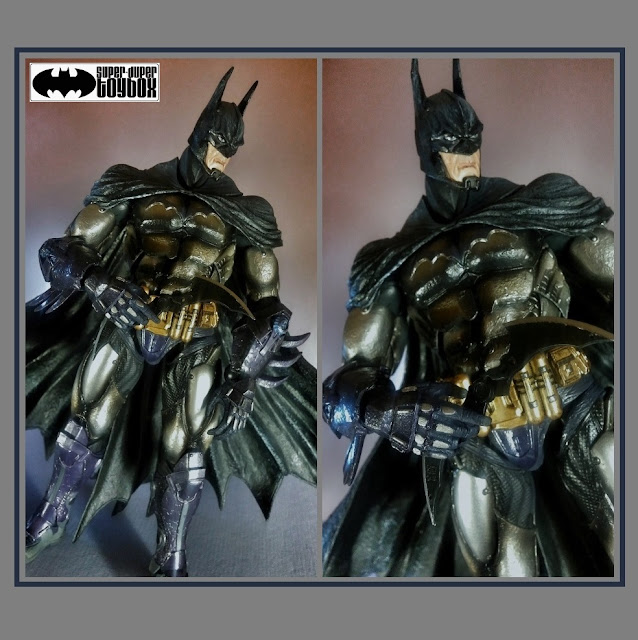 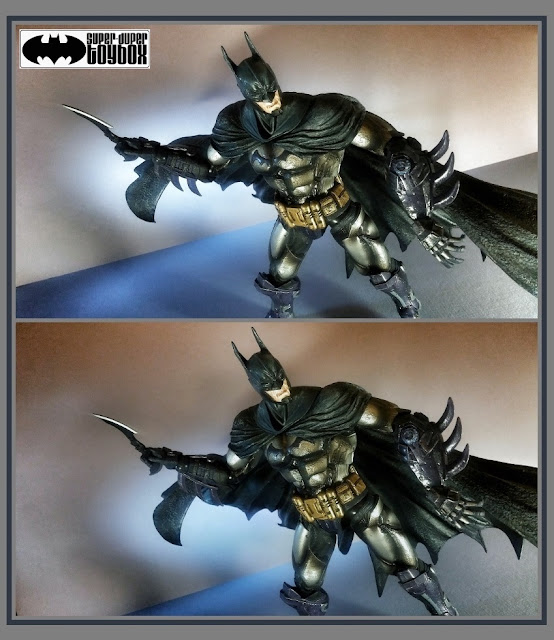 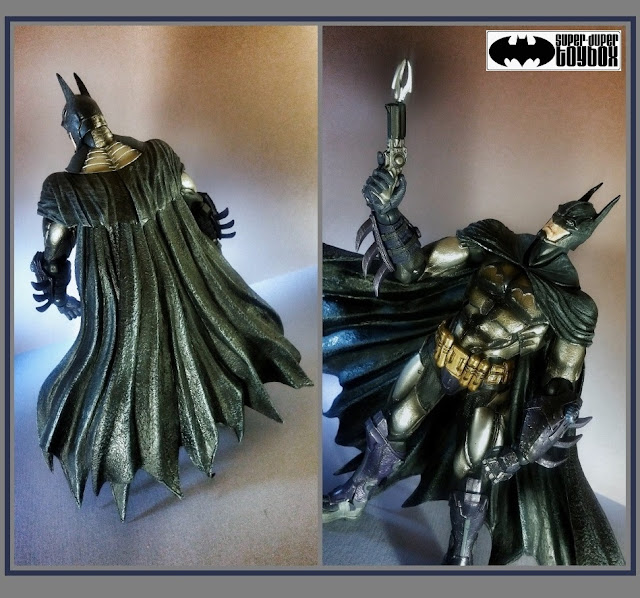 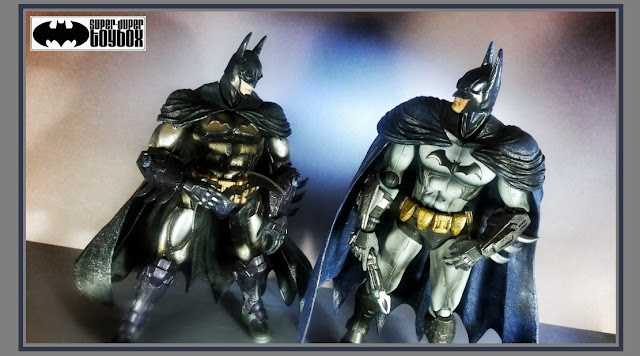 More Later- Make It FUN!
Posted by Super-Duper ToyBox at 11:19 PM No comments: 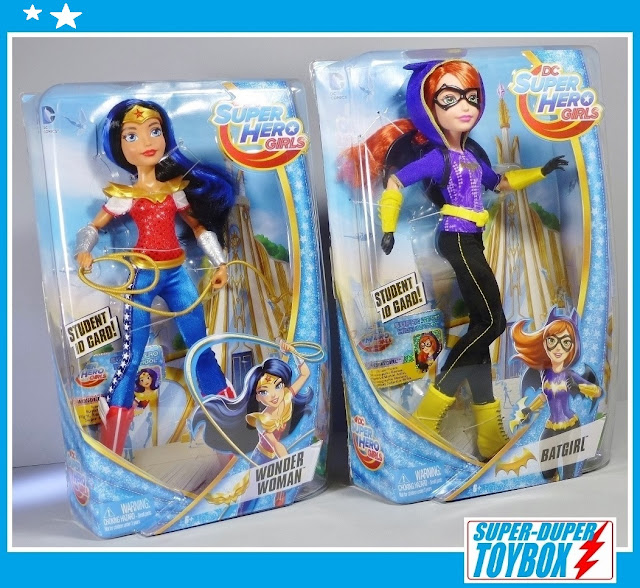 I know my friend Canadian Kal is into Monster High dolls, which these new DC Super Hero Girls remind me of a lot. They are full-on dolly, no doubt, which isn't typically a place I go, but there was no denying the great styling of the characters. They have a respectable amount of articulation, cloth outfits, and simple accessories. Also in this series are Poison Ivy, Bumblebee, Supergirl, and Harley Quinn. Anyone know where I can find a very small comb ...?   :D  Check out my video: 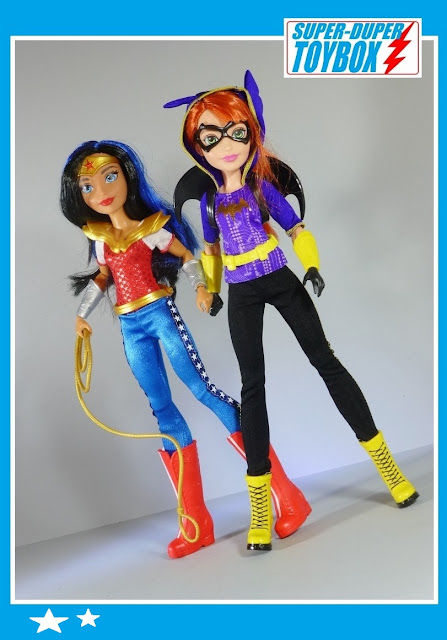 Batgirl with my 19" Jakks Pacific Big Fig Series Batman, and Wonder Woman with my 11.5"  Mattel New 52 Superman. I love the bright, happy colors of these toys together! Fun! 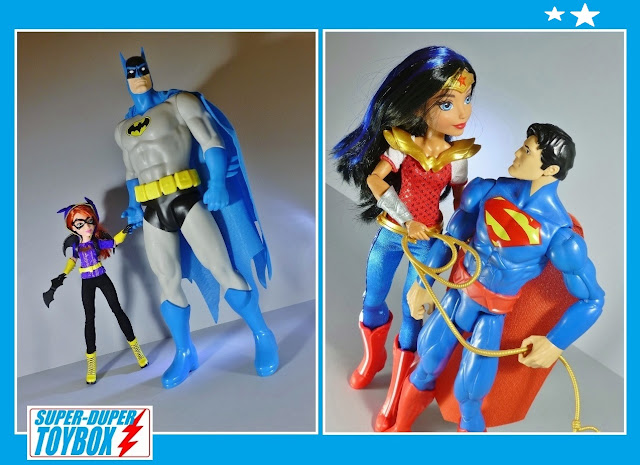 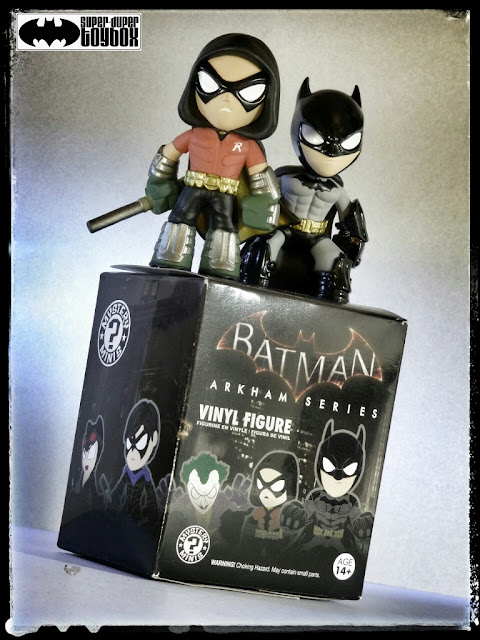 I know what I want from a series, so I skipped the whole blind box novelty of these 3" Funko vinyls and bought them on eBay. Robin looks right styled with a hood, and chose the more conventional Batman from this series, which included at least three versions- likely due to his shiny cowl which has lots of eye appeal. In January I reviewed Kidrobot Flash and Green Arrow blind box figures, which had swivel heads and arms, but Batman has his own vinyl figure subcategory within my collection, within which these shall complement nicely. 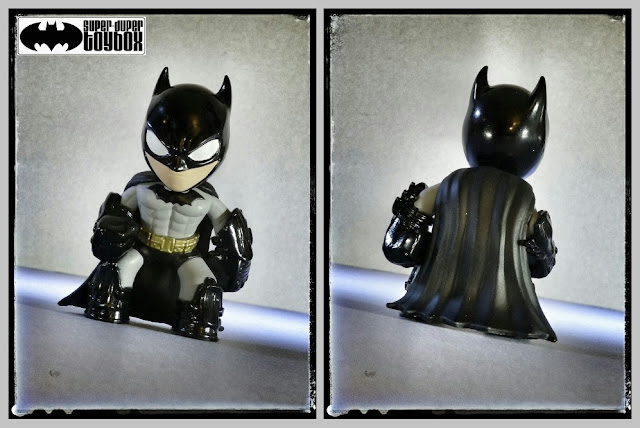 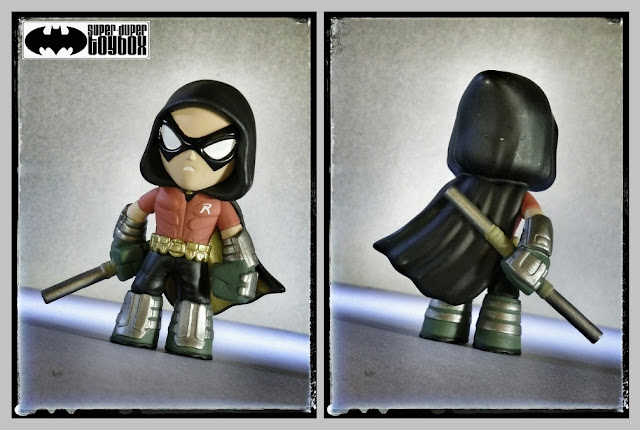 Though not articulated, I love these together! My only complaint would be their somewhat unstable footprint, Batman the worst offender due to his forward stance. The issue seems inconceivable with their stubby limbs and short stature, but the head size is the culprit. This has been the case in a few similarly proportioned toys I've picked up recently, such as the diecast Jada Armored Batman. They do, however, stand well enough to amuse me... 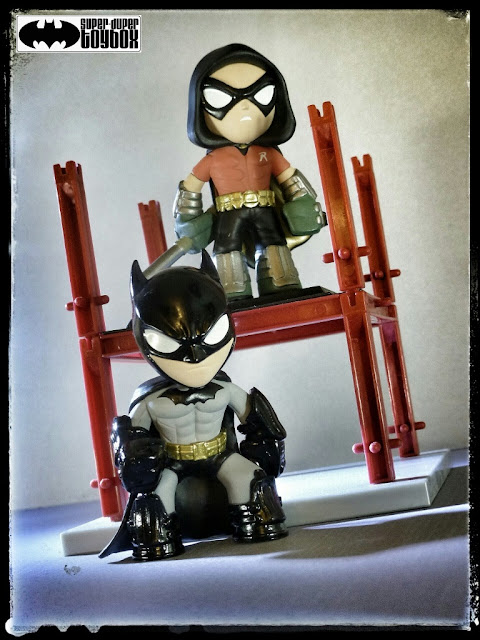 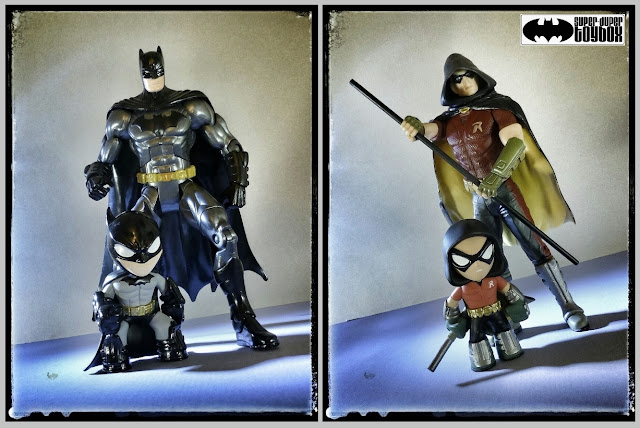 Batman Arkham Series Funko Mystery Mini Batman & Robin with Funko POP! Series Arkham Knight... though from a different series, they go well together in a way, the sign of a toymaker with a style... 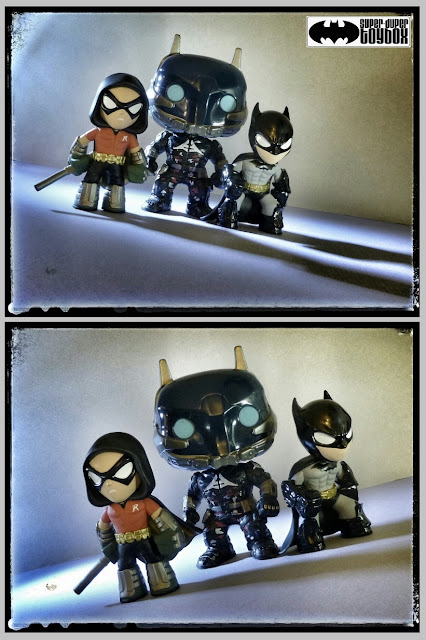 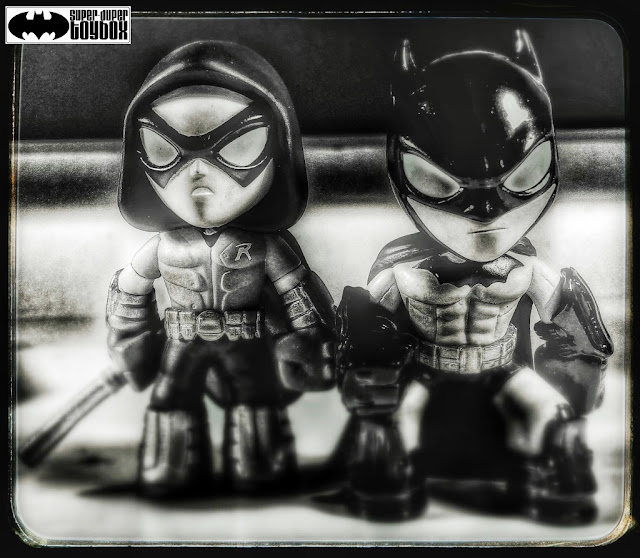