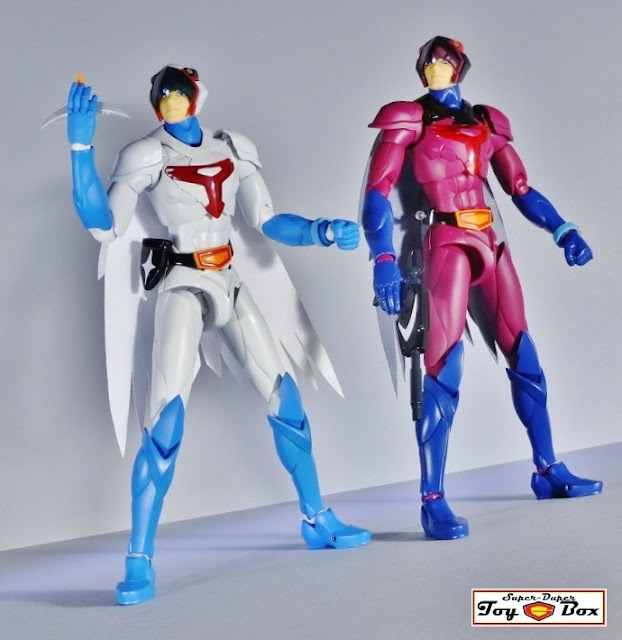 These two 6.75" Heroes Fighting Gear Series Gatchaman were an impulse buy, my nostalgia for the '70s animated TV show Battle of The Planets the driving force. As a child I had no concept of the idea it was an Americanized version of the Japanese anime series Science Ninja Team Gatchaman. I do however remember thinking Mark and Jason were the coolest of the five G-Force members, the latter my favorite in his darker uniform. Check out the video:


Aside from snapping one of Mark's shoulder pads, and the butt-end off Jason's gun, they are beautiful figures with TV accurate accessories, including weapons, extra hands, and a sturdy flight stand. If that weren't enough, the chest lights up, the cape is cloth, and most of the limbs, torso and pelvis are diecast metal, giving the figure a satisfying heft. Don't be fooled though, they are fragile and have lots of small parts easily damaged or lost. That said, they honor the beautiful design of the original costumes in an updated, hyper-stylized form. 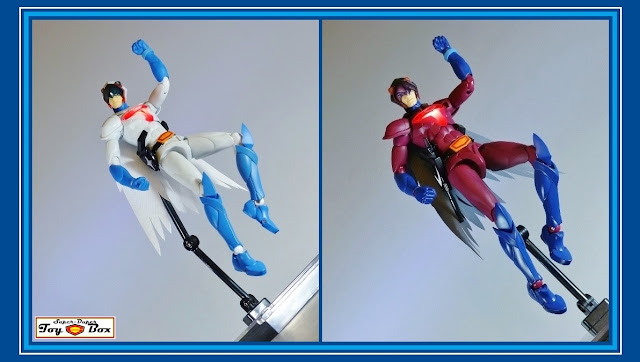 Below, Fighting Gear Gatchaman G-1 and G-2 with my Marmit Heavy Gokin Devilman, another imported diecast figure based on an anime TV series I found recently... 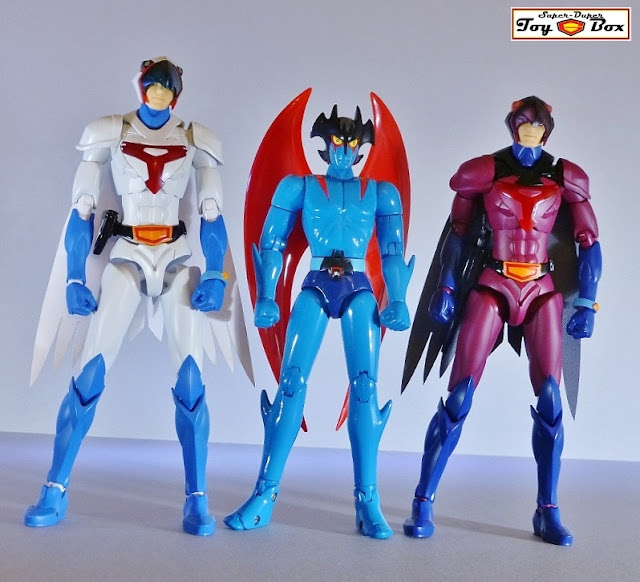 Email ThisBlogThis!Share to TwitterShare to FacebookShare to Pinterest
Labels: Battle of The Planets, Gatchaman 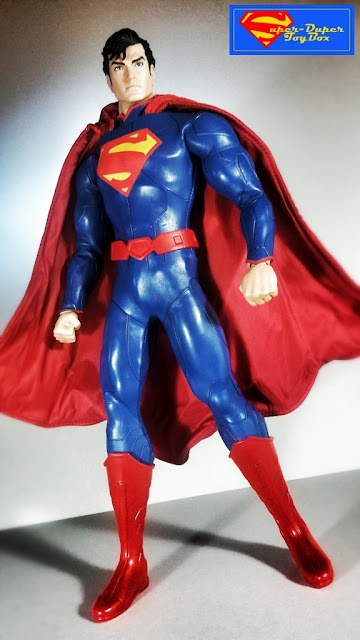 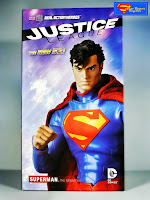 I found this  Medicom RAH New 52 Superman not long after I ordered the RAH Flashpoint Batman in my last post, for an even better price on Jet.com. I love his bright colors, and though I'm leary of it's durability, the shiny vinyl bodysuit. Like the Batman figure, Superman has wire in the cape- I prefer just a straight softgoods piece in this department, but it does add a certain flair, even if minimally. The chest shield on this figure is a raised piece, which does a lot for it visually. As I said before, Hot Toys and Sideshow 1:6 figures offer a better overall value than these Medicom, but they do have their own charm being very comic book in style. Check out the video: 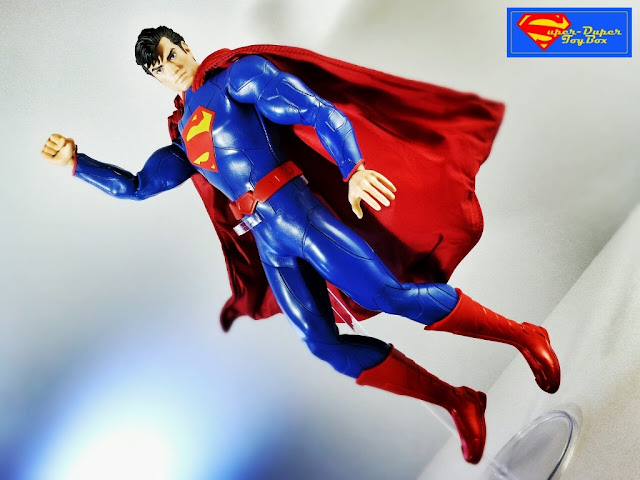 Below, Medicom 1:6 Scale RAH Superman with my other New 52 Supermen, including the 11.5" Mattel Superman I reviewed in back in November of last year. Jim Lee's reimagined Superman outfit appealed to me almost immediately upon DC Comic's New 52 relaunch back in 2011... 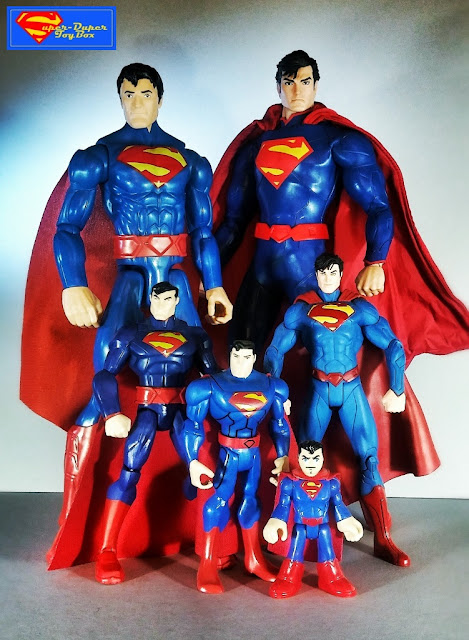 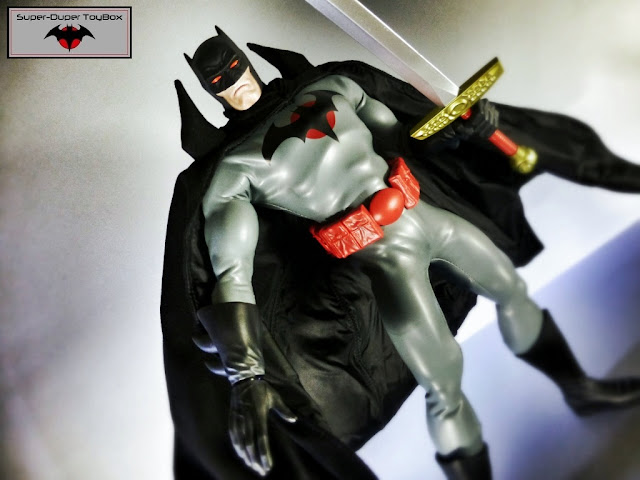 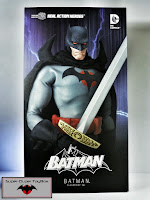 As soon as I discovered this 1:6 scale Flashpoint Batman existed, I hunted down the best deal I could find. In Flashpoint (DC, 2011), Barry Allen is pulled into an alternate Universe where the history of the heroes he knew had been altered, the mantle of Gotham City's Batman filled by Thomas Wayne, son Bruce having been killed that fateful night in Crime Alley. I'd contemplated purchasing earlier Real Action Hero series Batman figures, admiring their styling but somewhat underwhelmed by their construction after viewing a few reviews, but caved when this one was recently released. There is indeed a slightly chintzy quality to the vinyl bodysuit, snap-in hands, and cheap plastic sword. That said, he's sure a looker- check out the video:

Below: Batman, Thomas Wayne, runs Eobard Thawne through with an Amazonian sword at the climax of Flashpoint, setting the stage for DC Comics' 2011 relaunch, The New 52. This book and that moment are are memorable to me, as not long before this I'd regained interest in comics with a passion unmatched before in my life, perhaps even during my childhood. 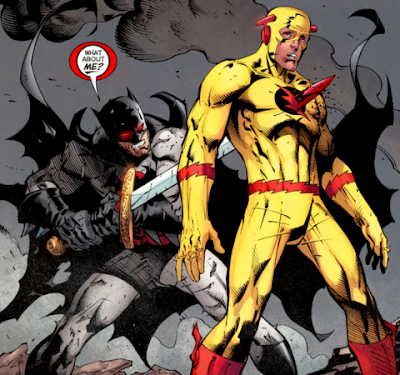 Medicom Real Action Heroes Batman with Sideshow Collectibles 1:6 Scale Batman. At about the same price, the Sideshow is a far better value, constructed of superior plastic and fabric, and realistic paint subtleties the Medicom just doesn't have. Still, the Flashpoint Batman does have a simplicity and vampiric style I really enjoy... 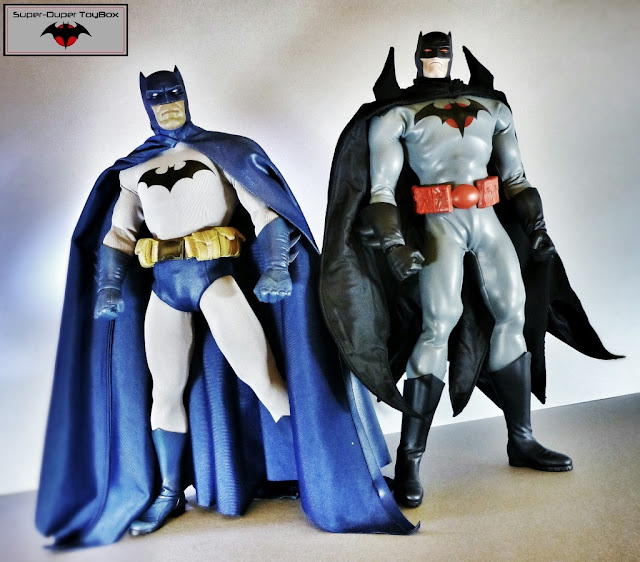