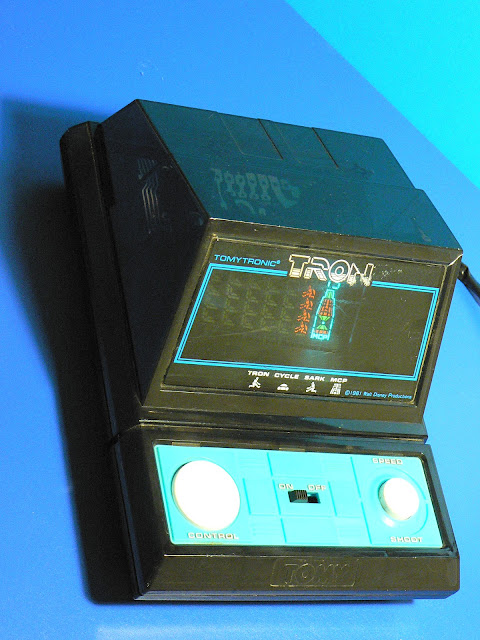 As mentioned in my previous post, I dug out some of the old toys that survived my childhood when I was visiting the folks over Thanksgiving weekend. One of these survivors was a tabletop Tron video game, produced by TOMY in 1981. I thought this would be a timely post due to the brouhaha surrounding the highly anticipated 2010 Tron: Legacy motion picture coming out in December. My younger brother played with this the most, beating all of the levels of difficulty it offered quite easily- he was a smart cookie, that boy! Released at the height of the video game craze, this simple game was a relatively advanced toy for it's time. My brother and I were feeding quarters to the machines at the local arcade regularly in the early 80's, so this was right up our alley. 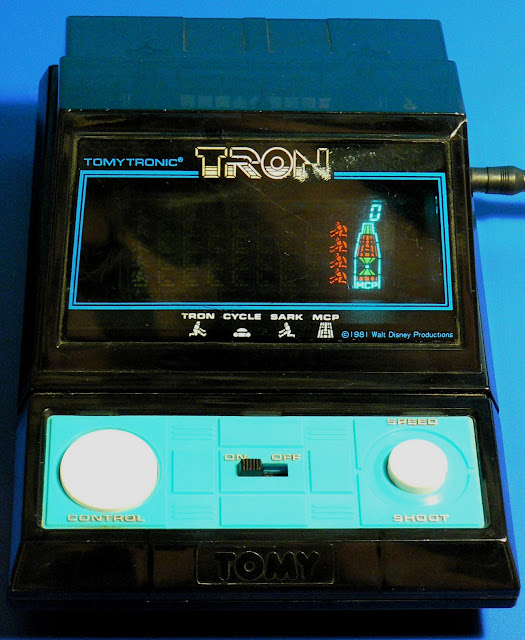 There are three levels on the game:
1.) The lightcycle game- Tron (you) tries to cut off the Sark light cycle path before he cuts off your path. You get four tries.
2.) The ring game- Tron and Sark pass the ring back and forth until one misses his catch, much like a game of frisbee. Again, you get four tries.
3.) The MCP game- Tron (you) must throw his disc through the MCP barrier that's moving up and down around it- a simple game of timing.

All these levels get faster each time you master them, until you achieve 2,000 points when you gain an additional Tron for each level (5 total). The highest possible score is 15,995 points to completely master the game.

The game is powered by four "C" batteries, but can also be powered by a 7.5 volt AC adapter. I don't remember if the game came with an adapter, but I was lucky enough to have a roommate that has a bunch of spares. He had to reverse the polarity in the adapter's wiring however, as most modern adapters now run on positive polarity as opposed to negative. We plugged in the modified adapter and the game came on and played just fine! A special thanks to my pal Mike, one of my biggest supporters- he's always enthusiastic and a good sport about my growing piles of toys all over our apartment! And because of Mike's electrical knowledge, this fun game came back to life! Hooray! 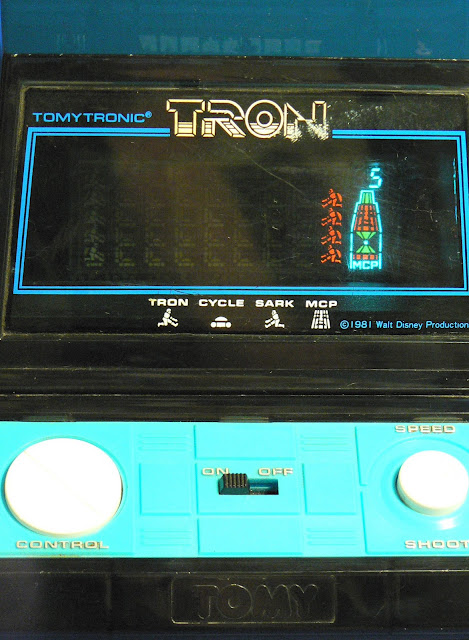 Email ThisBlogThis!Share to TwitterShare to FacebookShare to Pinterest
Labels: Tomy, Toys from My Childhood, Tron