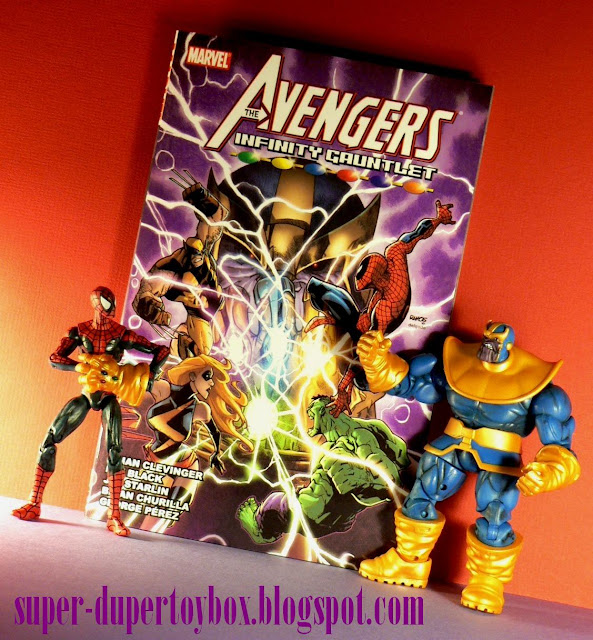 While seeking out a copy of Jim Starlin's Infinity Gauntlet reviewed in my last post, I discovered another, entirely different Infinity Gauntlet book-  The Avengers: Infinity Gauntlet by Bryan Clevinger. Released in late 2010, I found this four part "all ages" series compiled in one small trade paperback.
I for one had no idea that Marvel was redoing classic stories in abridged & contemporary style. This appeals both to a younger audience I suppose, as well as those inexperienced in Marvel's labyrinth continuity issues. But this book is a horse of a different color, nothing like the very dark Starlin book. Yes, Thanos has the Gauntlet, half the life in the universe disappears, and a team of the remaining superheroes is dispatched to deal with the dark Titan to make all right, but that's where the similarities end. Gone are many of the key characters confronting Thanos in Starlin's book: Silver Surfer, Adam Warlock, Captain America, Thor, Galactus, and Dr. Strange. Ms. Marvel, Spider-Man, Hulk, and Wolverine team up with Dr. Doom instead in what may be one of the funniest comics I've read... 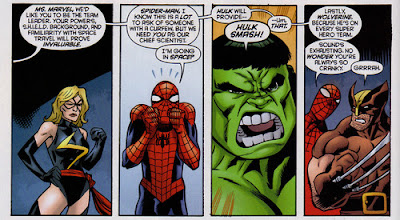 The dialogue & situational comedy between Spider-Man, Wolverine, & Doom is the best, making me chuckle every time I turned the page. Brian Churilla’s visual gags made the comic timing come to life in this book- everyone except Spider-Man plastered to the walls of the ship every time space trucker US Ace hits the breaks never got old, Wolverine's grumpy intolerance of a sarcastic & humorous Spider-Man  made me laugh out loud several times, and Doom's moments of humiliation & grandiose delusion were particularly hilarious! When he was forced to make sandwiches for the team, I thought I'd pee my pants  :D 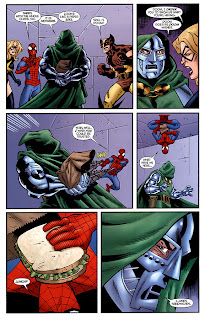 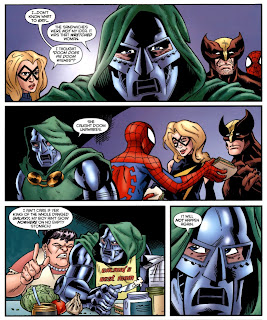 I just love Brian Churilla's cartoony style, too- it fits like a glove with Doom & Thanos. Behold! 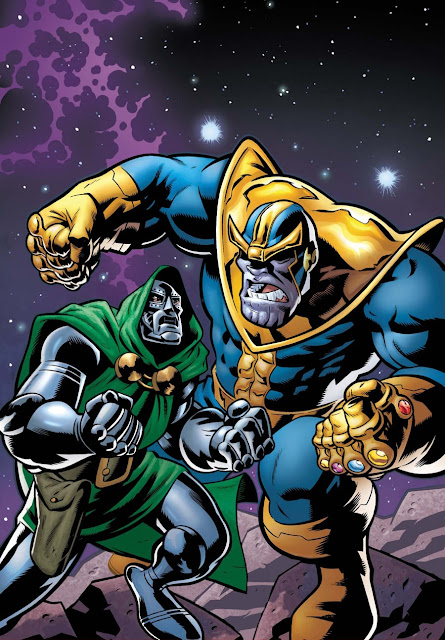 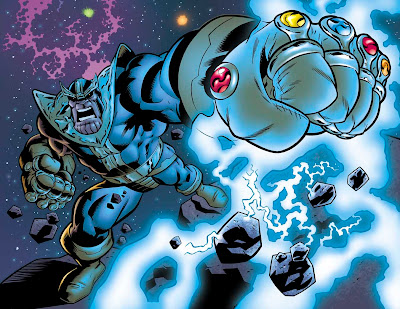 Mephisto and Thanos' beloved Mistress Death are absent from Clevinger's lighter reimagining of this tale as well, but you will have long forgotten that, laughing through to the end of this fun little book. A plot twist reveals Doom's secret right before Spider-Man, who has wisecracked his way across the galaxy, fumbles toward his moment of truth- will he finally get the respect he seeks from the rest of our heroes? Do yourself a favor and read it to find out!
Posted by Super-Duper ToyBox at 10:06 PM