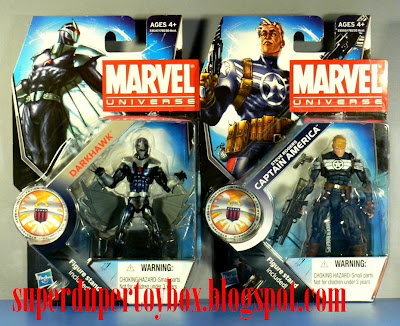 I must say: I was pretty hot for these two latest offerings from Hasbro's Marvel Universe 3 3/4" action figure line. After finding only one each of Namor & Ultron, I feared they might have all been swooped up. I knew this most recent wave would be a popular one, and it's  likely that scalpers were involved because a.) they were just released, and b.) you can't tell me they sent my local Wal-Mart only two new Marvel Universe figures! Nevertheless, I prevailed this past Tuesday evening at an out-of-the-way TRU that had two of each... and, yes- I left the other pair there for the other kids! Share the toys, dammit!  :D 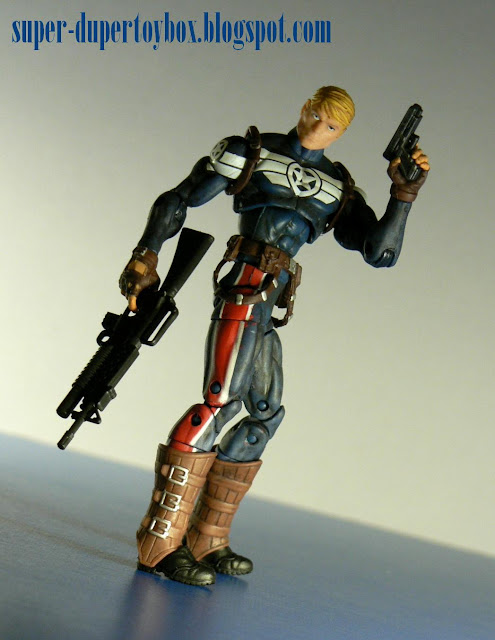 It's timely that I just reviewed the Heroic Age Captain America, as Commander Steve Rogers handed the the mantle over to his old sidekick Bucky, relinquishing his duties as the star spangled Avenger and becoming the director of S.H.I.E.L.D.  While I've never read the exhaustive catalog of Captain America history detailed in the Civil War, The Death of Captain America, Captain America: Reborn, Dark Reign, Siege, or Heroic Age story arcs, I simply enjoyed this action figure for it's own artistic merits. This is as good a Marvel Universe figure as Hasbro has ever produced. The paint, sculpt, articulation, and accessories are just as cool as I anticipated. In a word- he's bitchin'! 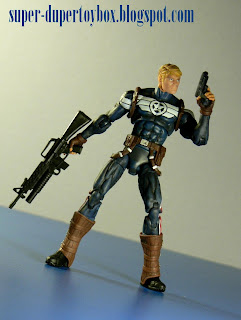 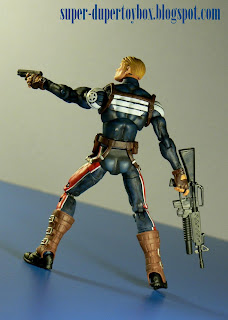 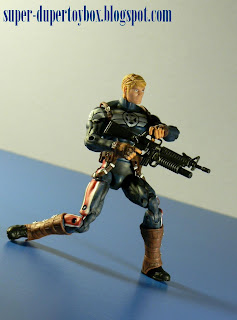 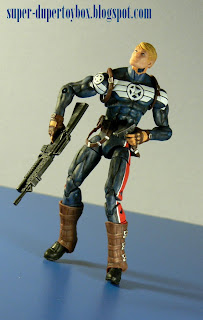 I've said before that I'm not a fan of the peg/socket hips & cut swivel thighs combo Hasbro gives some of these figures, but he does have pretty good articulation.  Commander Rogers has a ball-jointed/hinge combination head, swivel-hinge shoulders & biceps. He has an upper abdominal joint AND a cut waist for side to side movement.  Cut/swivel joints in his upper thighs, shins, & wrists in there, as well as  double hinged knees and the new hinged/rocker ankles, though his shin guards hinder their angling somewhat. Yes Friends, this is about as good as it gets for a high production action figure of this scale- he is top of the line for Hasbro. Sure, there's a little paint slop, but he's pretty good! 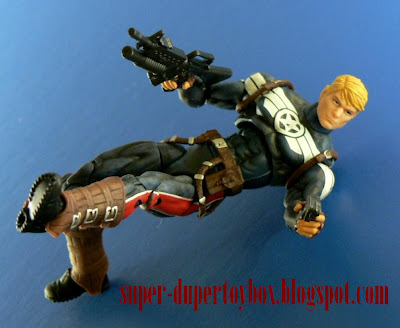 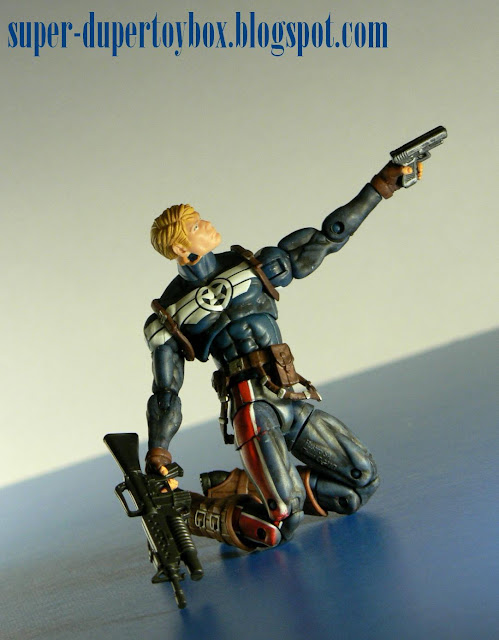 Darkhawk was created the year I finished high school, 1991, and I never knew of him until now. I was only interested in this figure due to it's unusual design in the Marvel Universe line, and I like action figures with wings. New Yorker Christopher Powell was a teenager who found a mysterious amulet in an abandoned amusement park, which allows him to switch bodies with a powerful android from another dimension called Null Space where it's body was stored & repaired aboard an alien starship. The android can fire a concussive blast or form a circular energy shield. from the amulet on it's chest, possesses telescopic and infra-red vision, and can fire a grappling hook cable claw from it's left arm. 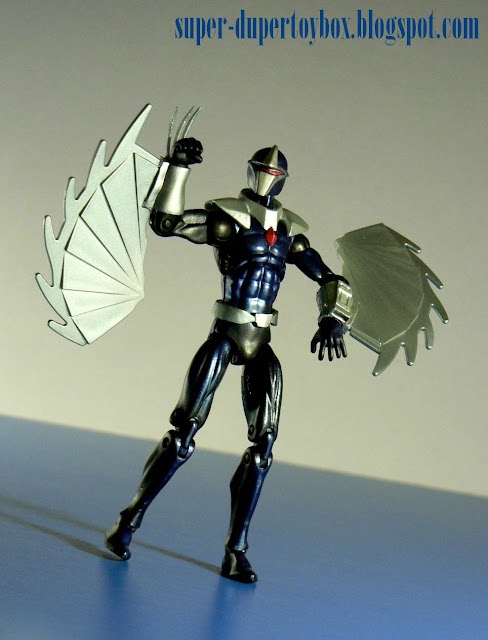 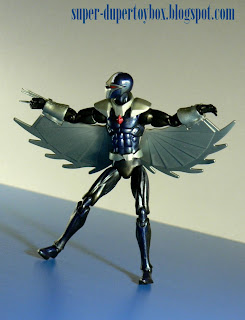 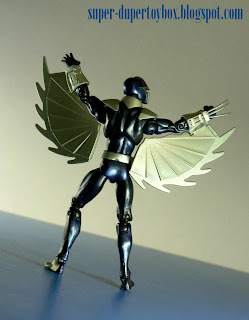 Darkhawk has a body much like my Spider-Man 2099, with the addition of the shoulder overlay and gauntlets in which the wings are inserted- much simple that Steve Rogers', but adequate. At first I had an awful time getting the wings to stay on, though I seem to have them lodged correctly now. I love the slender dark blue/black body on this guy, and was fascinated with him at first sight. And like the Spider-Man 2099, I have been surprised at Hasbro's decision to produce a character that had such a short time, his self-titled monthly series running for 50 issues that was published from March 1991 to March 1995. I'm tempted to hunt down at least one of the three annuals released during that time. 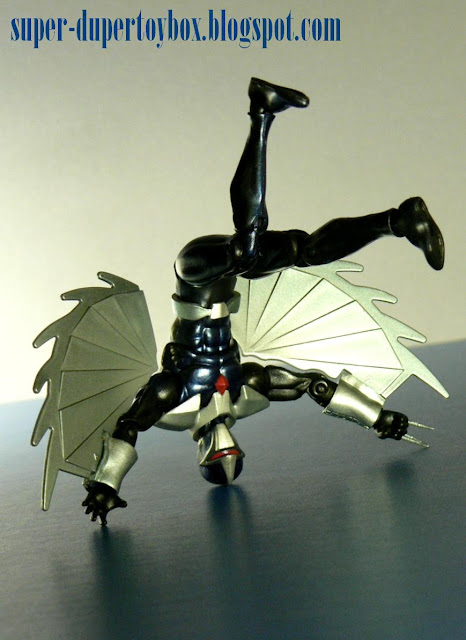 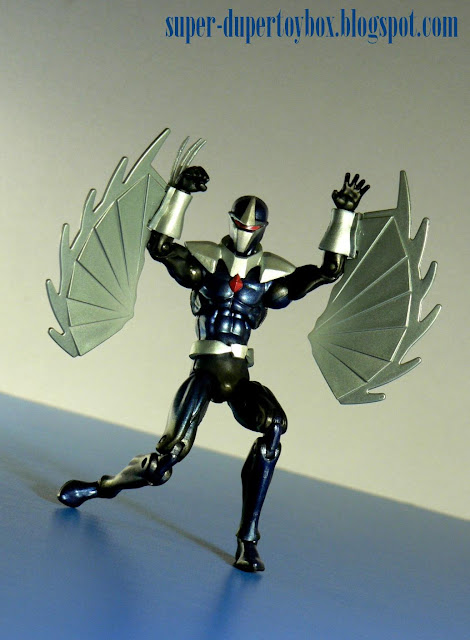 These were a couple of fun action figures from this line that you will want to buy on sight if interested- I have a feeling they will be popular!  Yes, these are priced ludicrously: $7.99 at Wal-Mart, and $8.49 at TRU where I found these two- that's outrageous, but I bought them. Like Mattel, their distribution is hit or miss- all those Thor & Iron Man toys and we can't get a decent selection of these. And Hasbro has really blown an opportunity to make a cool action figure many times in the past due to poor design and/or quality control, but they almost can't help it- they make a lot of toys! They did a couple good ones here. I have such a pile of these Marvel Universe left to open, but had to stop and show these to you  :) 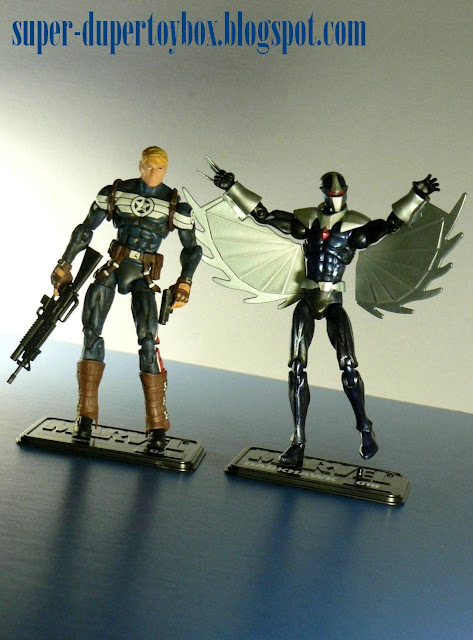