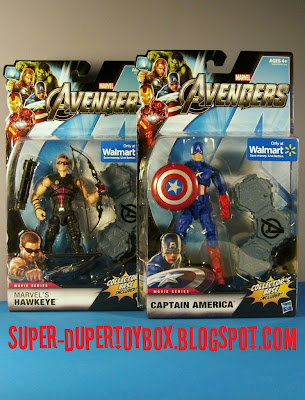 I guess you saw in my last post that I finally scored the Wal-Mart Exclusive 6" Hasbro Avengers- I wasn't going to get the whole set, but my new job pays better, so I don't care  :D  We'll start by looking at Cap & Hawkeye, the two I intended to purchase, as well as two Avengers who go together like peas & carrots. The bases on all these lock together so you can really impress your love interest other with a geektastic Avengers shrine in the living room! The Avengers logo is stamped on it so everyone's sure that movie made a bazillion dollars. 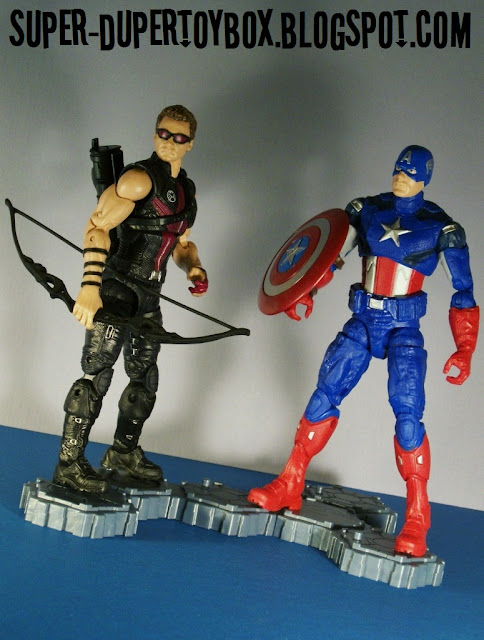 I was mostly interested in Capt. America for a decent rendition of the new costume, which looks a lot like classic Capt. America with it's bright coloring. These are, of course, a lot like the Marvel Legends line in size, detail and articulation.  Cap has a hinge/ball combo joint in his neck so he can look up & down, double-jointed knees & elbows, and a torso/abdominal joint that moves forward & back a little and does a 360.  A swivel joint at the glove tops is repeated at the top of his bicep where his shoulder connects with a hinge/swivel with good range. Cap has a hinge/swivel at the hips, and those swell new rocker joint ankles. Great articulation! 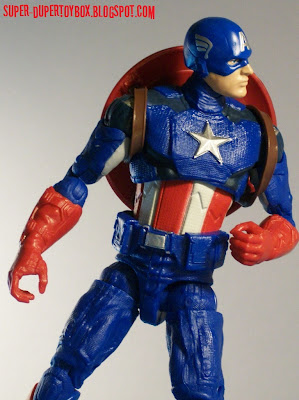 The surface textures on this sculpt are outstanding, from the raised symbols on Cap's helmet, through the fabric on his body armor, down to his pouched utility belt. his large area of bright coloring looks slightly plain without any paint washes, but he at least had some areas of a different blue peeking around the main body armor sections in his torso. This should have been applied at the cheekbones to be more like Chris Evans under layer in The Avengers, which I feel may be partly to blame for his lack of similarity to Evans' likeness.  The detail in his suit extends into Cap's incised shield sculpt, which is molded in a slightly metallic red plastic. 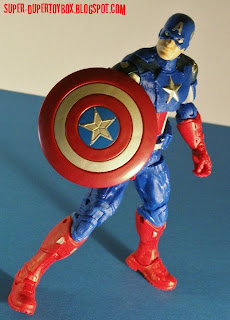 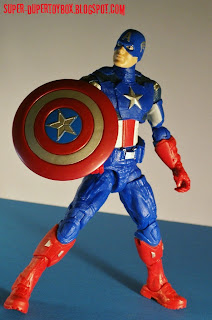 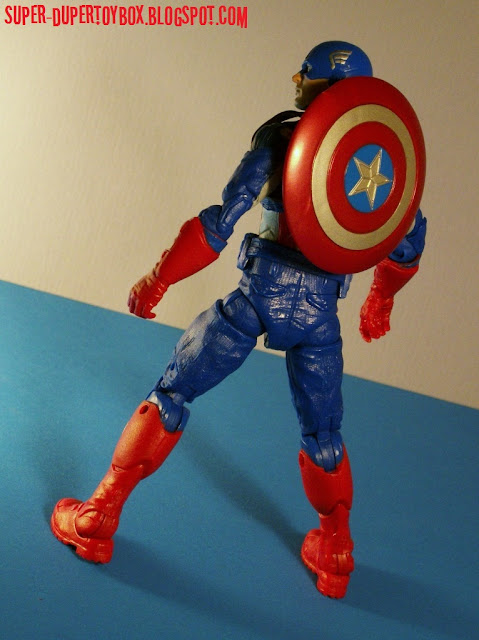 I like that he can wear the shield on his back, but the straps are somewhat laborious to wrangle into a secure position. I like the look of it with the straps over the shoulders, but the Marvel Legends Commander Rogers shield works more smoothly. Like the new Marvel Legends figures, I find these harder to pose than Mattel DCUCs, in spite of or maybe because of their joint construction. The new Legends figures seem to be made of a slightly less rigid plastic that the 6" Mattel figures, making them feel less sturdy to me. Whether I just imagine that or not, they are pretty cool, all said. 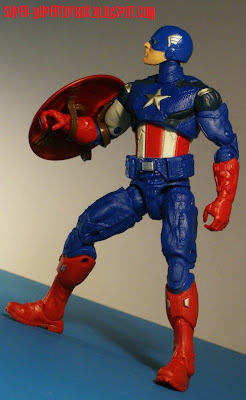 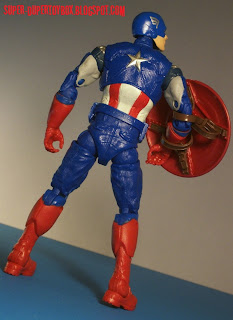 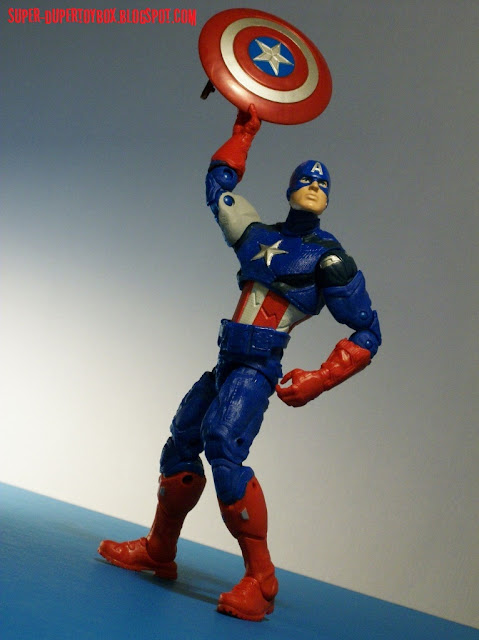 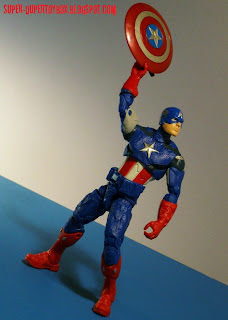 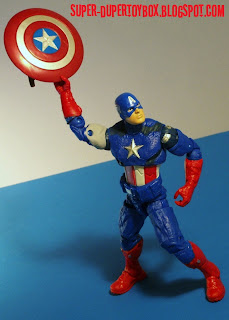 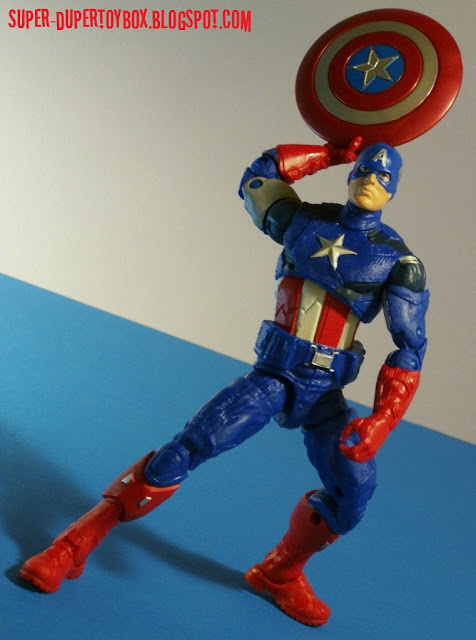 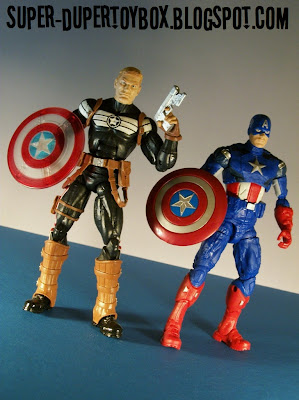 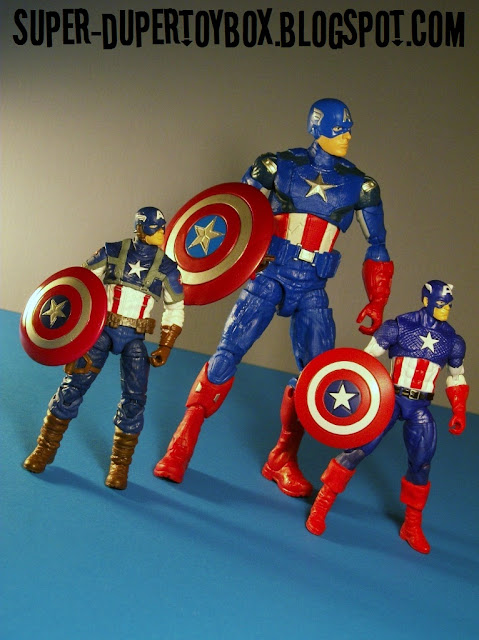 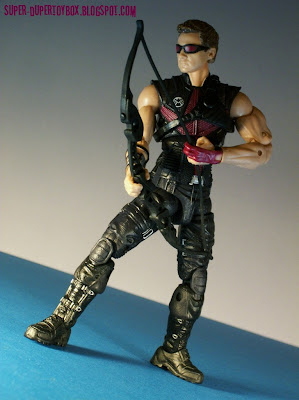 The star of this pair is probably Hawkeye though, who really looks like Jeremy Renner! He only has a ball joint at the neck, but has swivel/hinge wrists. The sculpt throughout the entire figure is extremely detailed with some nice paint apps on the tiny buckles. I was initially bored with Renner's outfit, so different from the classic Hawkeye, but his performance in the movie was great and this action figure rocks! 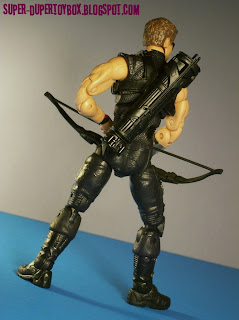 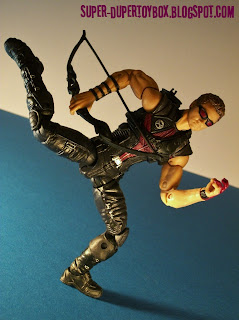 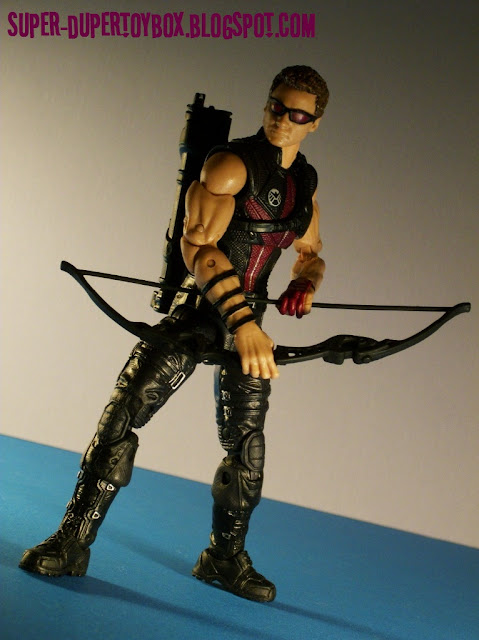 They didn't give Hawkeye any arrows to lose, but his quiver looks like in the movie, a rotating model which dispenses the right trick arrow for each task from individual barrels in the mechanized housing. And his compound bow has is as detailed as the outfit. I managed to get Hawkeye into a few poses drawing the bowstring using the hooked fingers in his left hand. 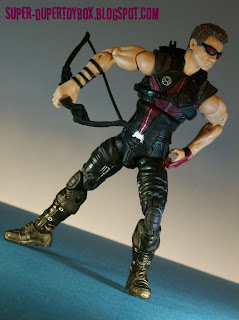 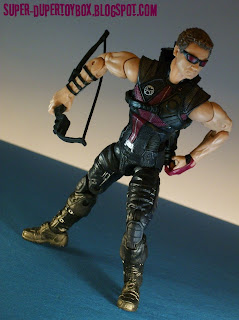 He has a somewhat flat skin tone, but his shades and face/hair sculpt give Hawkeye a very realistic look. While the paint apps are probably no more than on Cap, Hawkeye has a deeper, less flat look all around, likely due to his coloring. 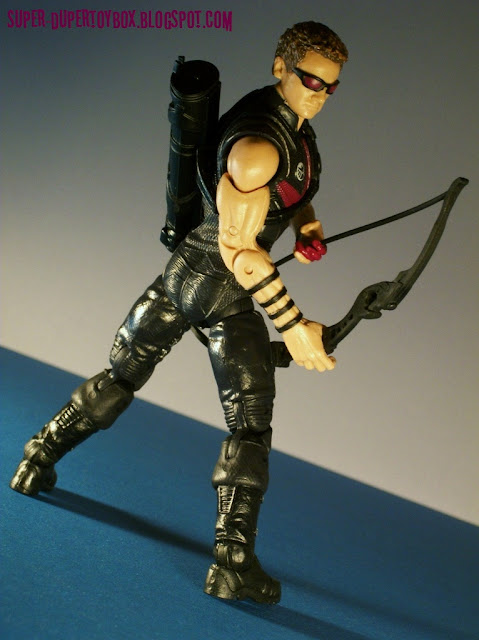 So, yes- Hawkeye & Captain America make a fun pair here! $15.96 each seems like a lot when buying more than one, because it is, but that's the going rate nowadays. I felt lucky to find them, and wouldn't be surprised to see them sell out quick. The movie-accurate costumes both have great texture but Hawkeye's Jeremy Renner sculpt seem to make him the winner. 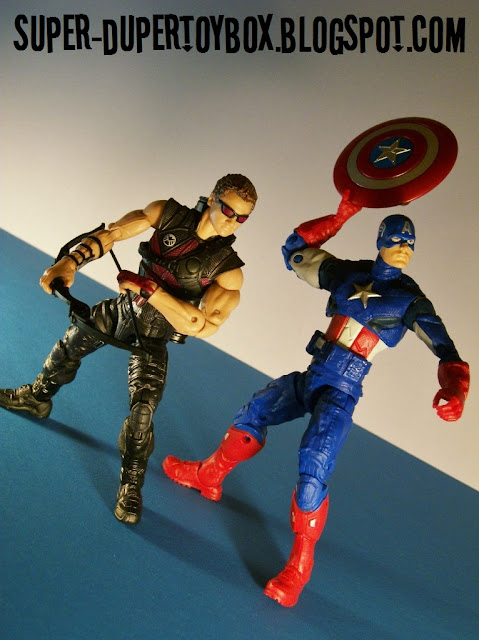