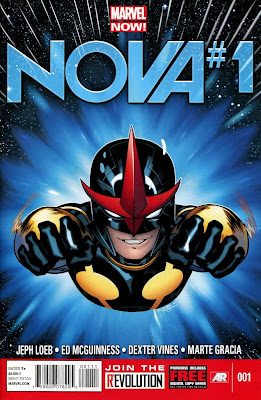 Another Marvel NOW! title I began reading a few months ago is the new Nova book. While I did read Annihilation: Conquest hardback, this character appears mostly in the middle portion of the story arc- my only real exposure to Nova. In the Marvel NOW! relaunch, we see the passing of the mantle to fifteen year old Sam Alexander, whose father tells his kids stories of his past glories as a Nova Centurion when not embarrassing his son as the alcoholic high school janitor. 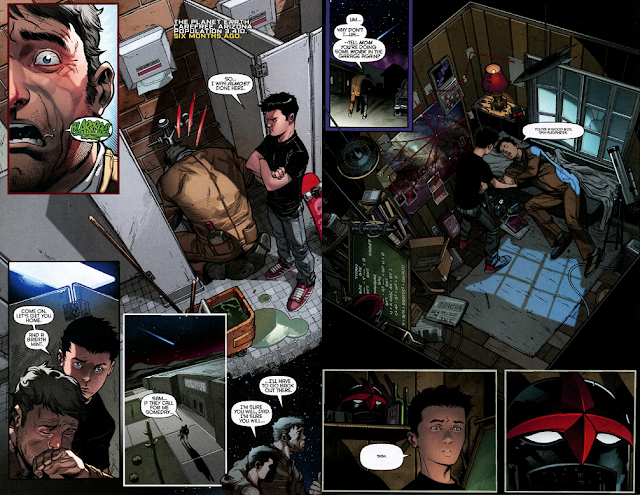 Sam clearly bears a huge chip on his shoulder, aggravated by a school bully, and in constant conflict with the authority figures in his life. I thought of Marty McFly in Back To the Future, and so did the creators of this book, direct physical homage drawn after the tough, bald high school principal and relentless bully, Sam even riding a skateboard. Idealistic youth resents his father, and through trial finally relates to him by walking in his footsteps- that's where this is going. No, the beleaguered teen isn't really anything new, but I like that Marvel is telling the story of another Nova Corps member, and exploring a new angle. And there is always a fresh batch of misunderstood teen demographic they are always looking to appeal to... 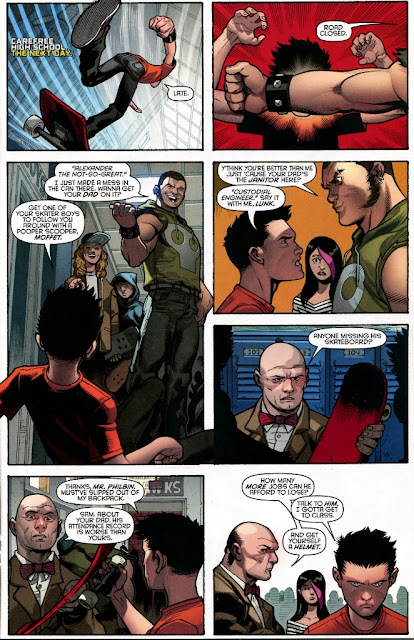 I liked Ultimate Comics: Spider-Man with Miles Morales as the teen-aged hero, and the cosmic backdrop of Nova appeals to my more recent interest in that setting/genre within comics. As a Green Lantern fan, I like the whole intergalactic police force premise, and am a big fan of penciler Ed McGuinness' work, beautifully finished here by inker Dexter Vines and colorist Marte Gracia. Check out this flashback spread from Sam's father Jesse, retelling tales from his Nova days to daughter Kaelynn... 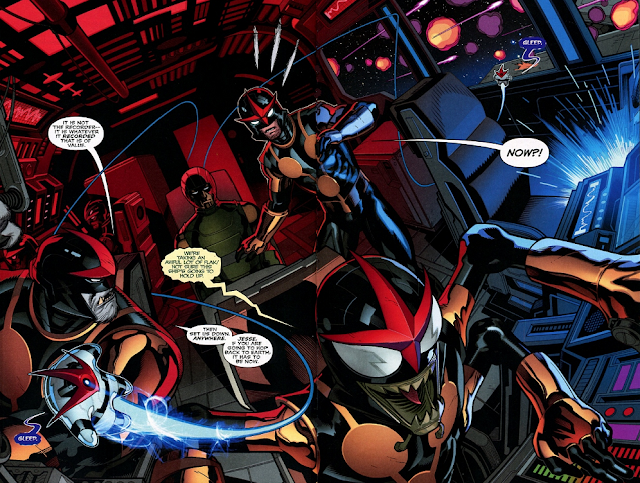 But his defense mechanisms and reckless behavior will come in handy when Sam comes to realize the stories his father told were all true, and the teenager must face his father's past enemies as a member of Nova Corps. Upon returning home one night after a frustrating bout with the school bully, Sam discovers his father gone, mistakenly accusing him of leaving the family. Racing off on his skateboard to stop him, Sam hits a rock, flipping him over an knocking him unconscious. When he awakes, Sam realizes in an instant that his father was not lying about his Centurion rank in the Corps, two members of the oft recalled Guardians of the Galaxy standing at the foot of his hospital bed...! I'm reading the Marvel NOW! Guardians of the Galaxy now as well, so it's fun to see one of my new favorite Marvel hero teams show up. So great... 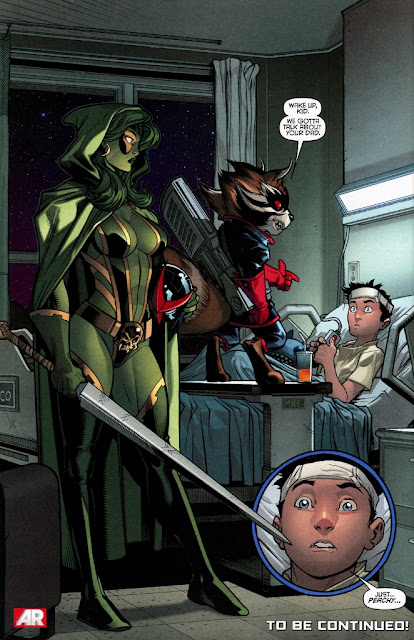