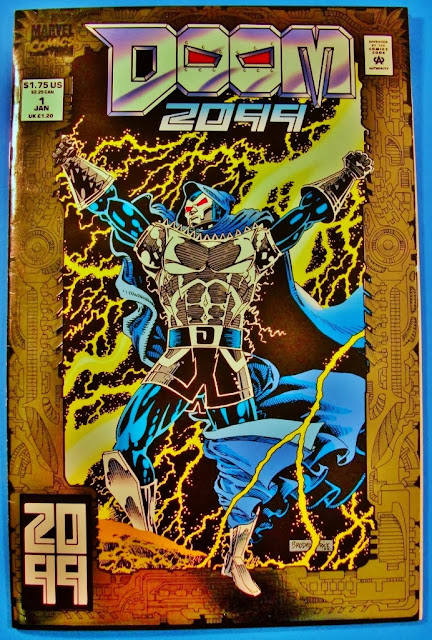 I've been a fan of Spider-Man 2099 since reading the first volume TPB, and have picked up a few spare issues since, but until now had neglected the first four issues of Doom 2099 I scored around the same time. Marvel Comics' Marvel 2099 imprint that began in 1992, which explores a possible future of the fictional Marvel comic book universe where several characters a re-imagined therein. In Doom 2099, a man claiming to be Victor von Doom appears among the ruins of Dr. Doom's castle in the distant future, incredulous of what has become of his country of Latveria, now under corporate rule that has exhausted it's resources and driven it's people into a state of distopia. 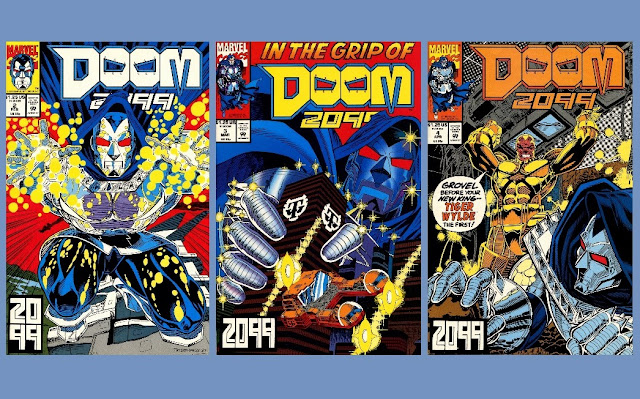 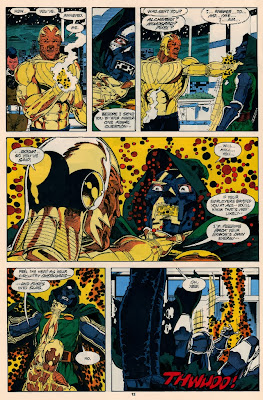 Latveria is ruled by future Latverian robber-baron Tyger Wylde, who battles against other mega-corporations like Alchemex and Pixel for domination. Upon Doom's discovery of the grave state his beloved kingdom's fate, he confronts the warrior mogul, eventually succumbing to Wylde's superior tech. Before frying his face, Wylde berates the impostor for overlooking the fallen dictator's scarred mug in his masquerade. Doom is rescued by Fortune and her band of gypsies, who share his Zefiro clan lineage. The group rallies behind this unlikely freedom fighter, restoring his health and building him new armor for another confrontation with Wylde, who Doom eventually defeats in issue #4.  Reclaiming Latveria, Doom decides the world is corrupt, and must be taken over to be restored- sounds like Doom to me! This title ran for 44 issues, the character appearing in several other 2099 titles, and receiving  his  own one-shot after conquering the United States. I'd not before noticed the name of author John Francis Moore who also wrote some X-Force and X-Factor stuff I liked from the '90s, or artist Pat Broderick, whose first run with Marvel soured due to editor Jim Shooter's scathing criticism of his art. After departing for a decade long tenure at DC, Broderick returned victorious to draw Doom 2099.

Known Doom enthusiast Canadian Kal  pointed out that without that DAMN RICHARDS around to stop him, Doom could be the champion of Latveria and hero- a second chance of sorts. And like I also noticed, Doom 2099 needs other people, no longer the despotic ruler we'd grown to love. In order to topple Tyger Wylde, the gypsies who rescued him must be trusted and tolerated. Without Fortune risking her life to double-cross Wylde, or Wire to crack his tech, Doom couldn't shut him down. While on the subject of tech, it wasn't lost on me that even though the internet wasn't a new thing, it would not be open to public use for another two years at the time of this magazine's publication in 1993. References to cyberspace, including one panel of cyber-savant Wire physically "surfing the network" on a board, seemed a little ahead of their time. 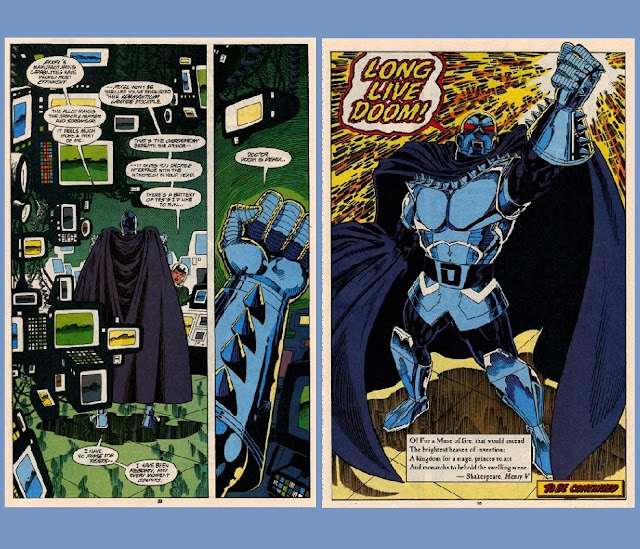 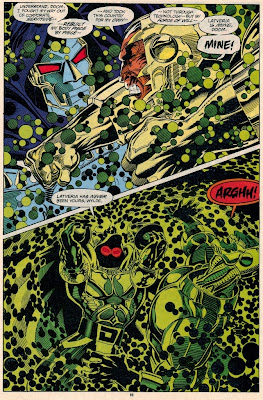 Kal also proposed this person may have been Doom plucked from an earlier time, which got me to wondering then if the memory flashbacks Victor experienced were just some sort of cosmic osmosis by which he recalled the older Doom's memories, as a younger Doom shouldn't have. Who is this man and from where did he come?  Only four issues in  I'm not an expert, and Doom 2099's true identity is unknown to me. I enjoy the possibility of this remaining an unresolved mystery, and Wikipedia claims the definitive truth is never revealed. I'll consider picking up the TPB collection, but these first four had a satisfying arc alone. When Doom steals Wylde's valuable, energy-rich tritonium and lures him near to detonate the volatile mineral, I thrilled to his calculated ruthlessness! Rising from the flames, Doom is revealed to have used the phasing technology of his futuristic neuro-armor to let the explosion pass through him like a breeze. Perfect! Though we are left with more questions than answers about the origins of this Doom, it's a good story with hyper-detailed art typical of this vintage. Fun stuff I'd think would thrill any fan of Doom! 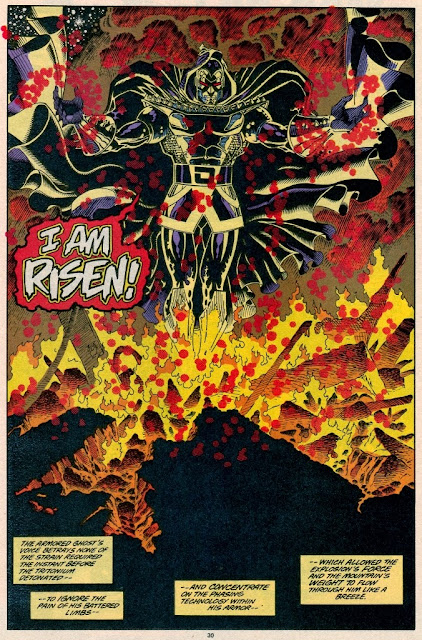