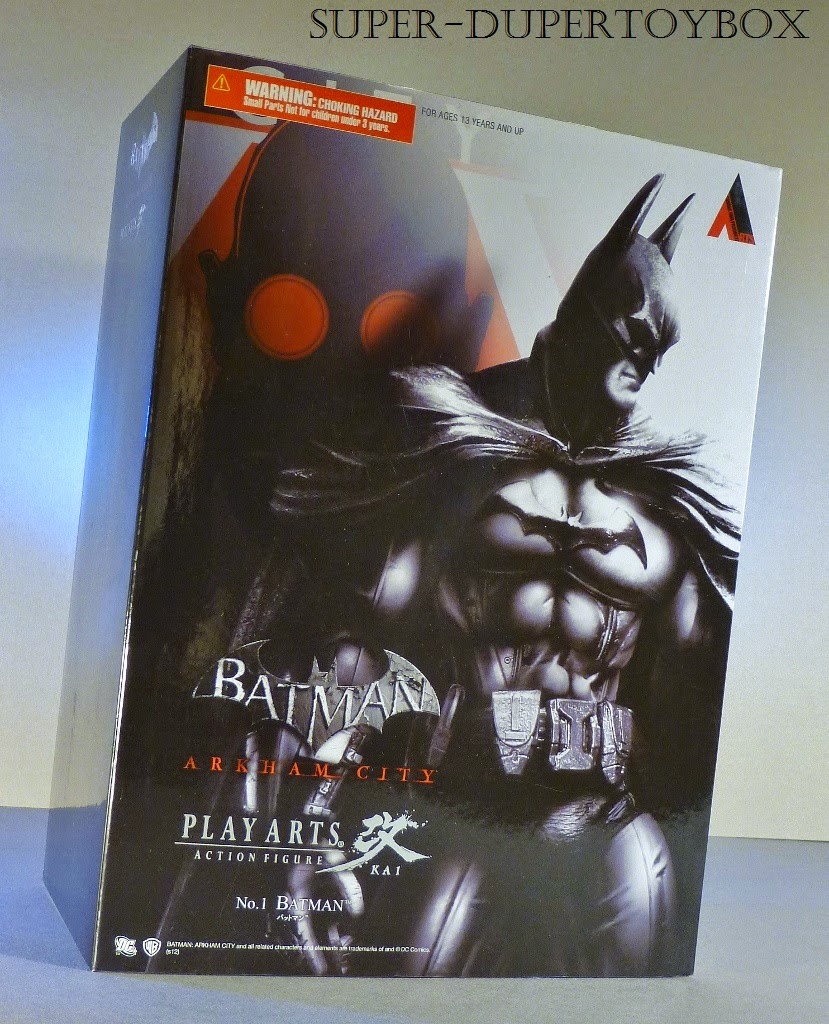 I've been after some more premium action figures lately, especially Batman action figures, and found this Kai Play Arts Arkham City Batman for a discounted enough price to pique my interest. At 1:7 scale, these 10" Kai Play Arts figures don't fit in with DC Direct 7" figures, nor with 1:6 scale, but that doesn't matter to me, and a character like Batman can display alone anyway. 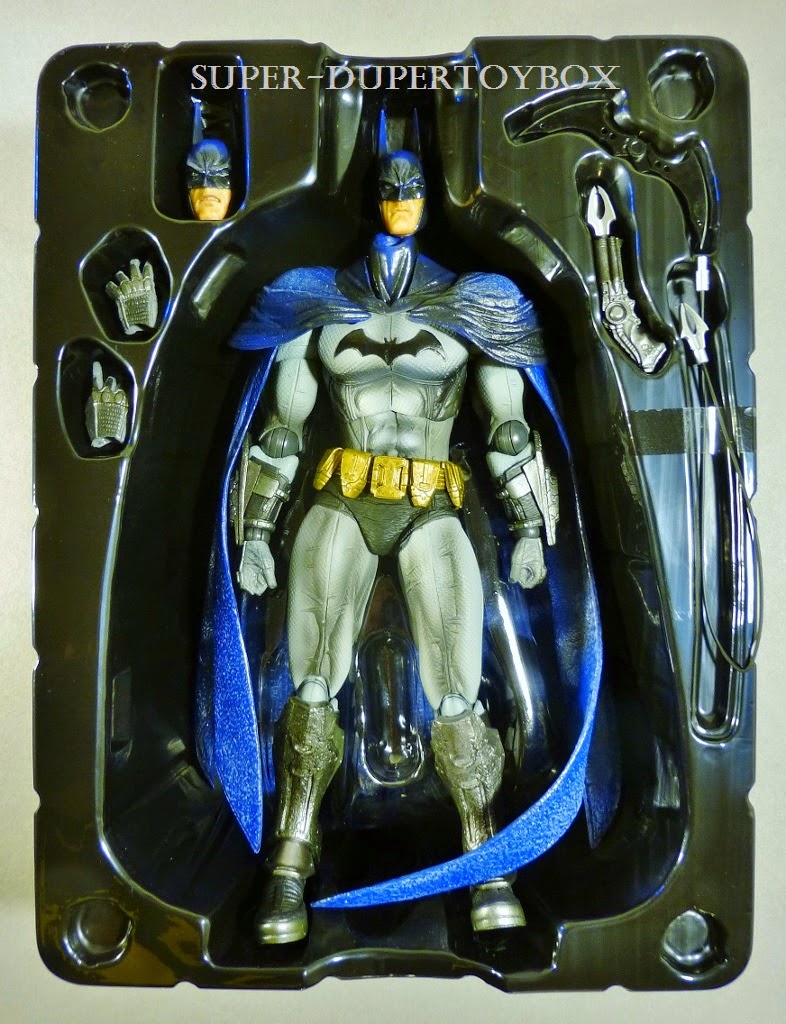 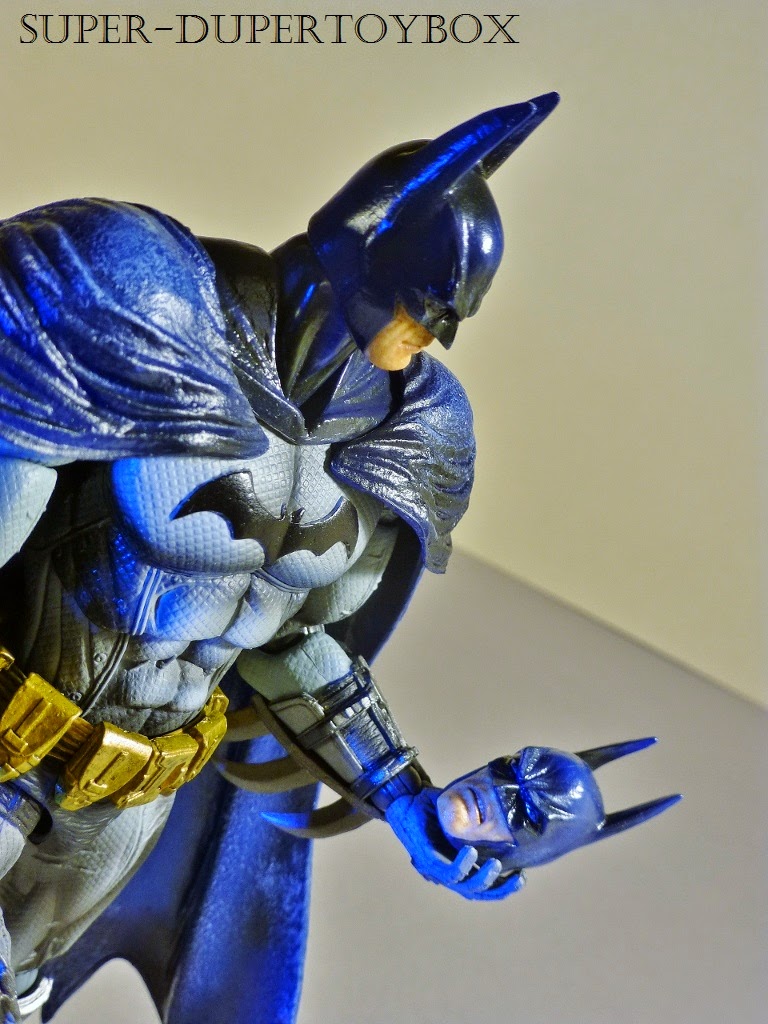 He came with a generous number of accessories, including an extra pair of hands to hold a batarang and grapple gun, and an extra head with clenched teeth. My first fifteen minutes were spent trying to get the peg into the figure's neck- it came detached for whatever reason, and likes to pop off if pushed beyond it's range. To complicate matters, it's hard to get the peg back into the hole, so I don't like messing with the figure's head... 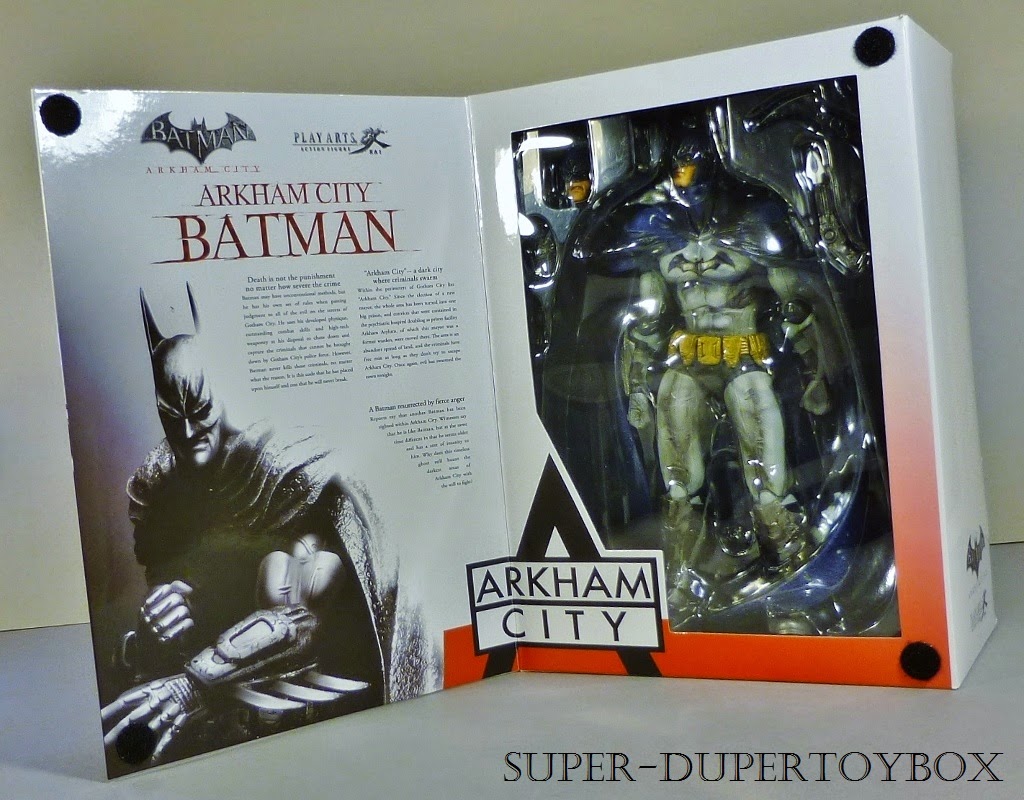 This figure has great detailing in the paint and sculpt! His larger size allows more room for deco minutiae in his body armor plating and texture. I love the shading in the arms, legs, and torso, and black washes on the utility belt. The figure's gauntlets and shin guards have a realistic metallic texture and paint, and the cape is deeply shaded as well. 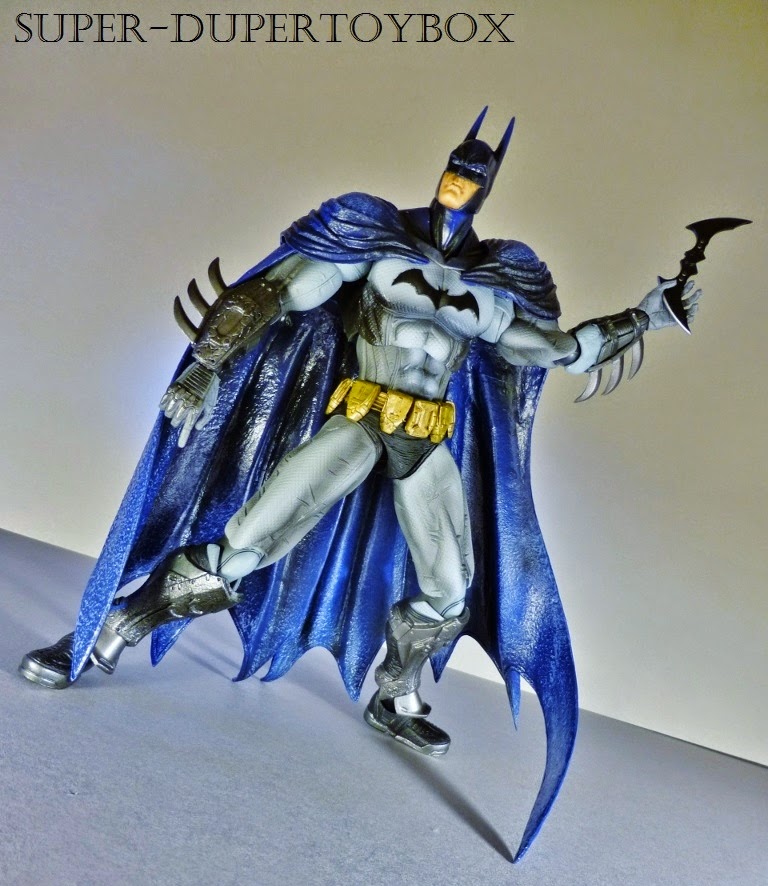 The figure has ratcheted elbows, hips, and knees. The wrists, ankles and elbows are ball-hinge equipped, as are the hips, and the torso has two ball joints. His biceps and toes have swivels, and his knees are double hinged. Batman's shorts, utility belt, and shoulder cape sections are cast in a flexible softer rubber to allow more range, but the figure's weight and oversized cape hinder his poseability. Still, he can be worked with, and is an exceptional looking figure with a heft that feels high quality. 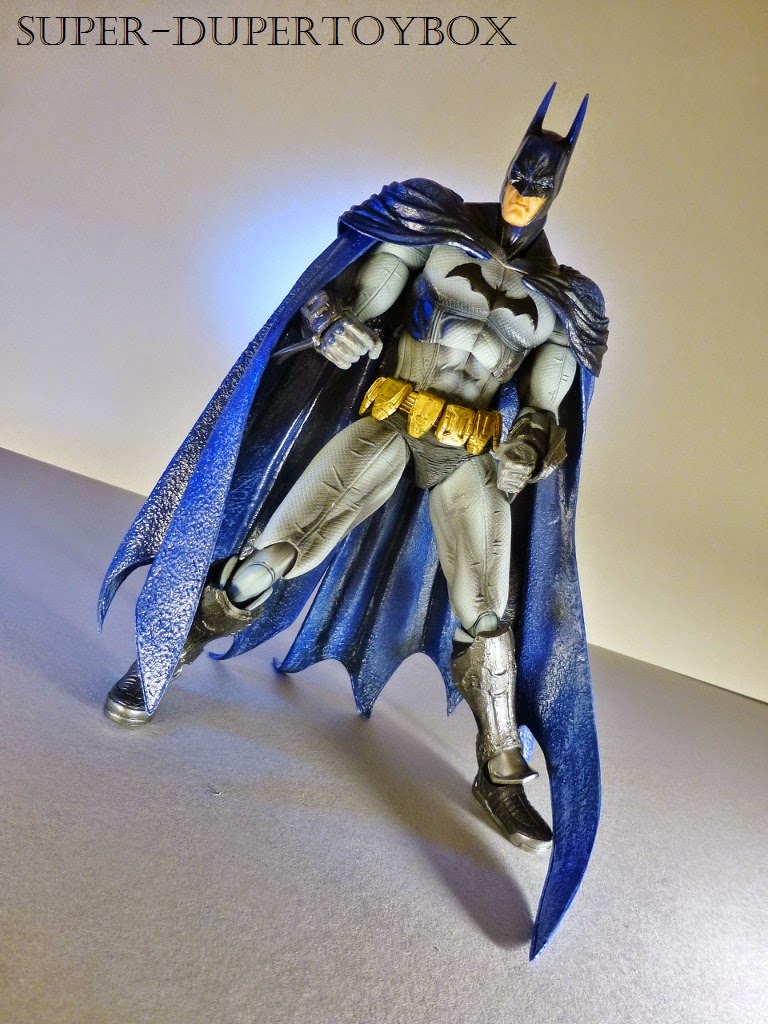 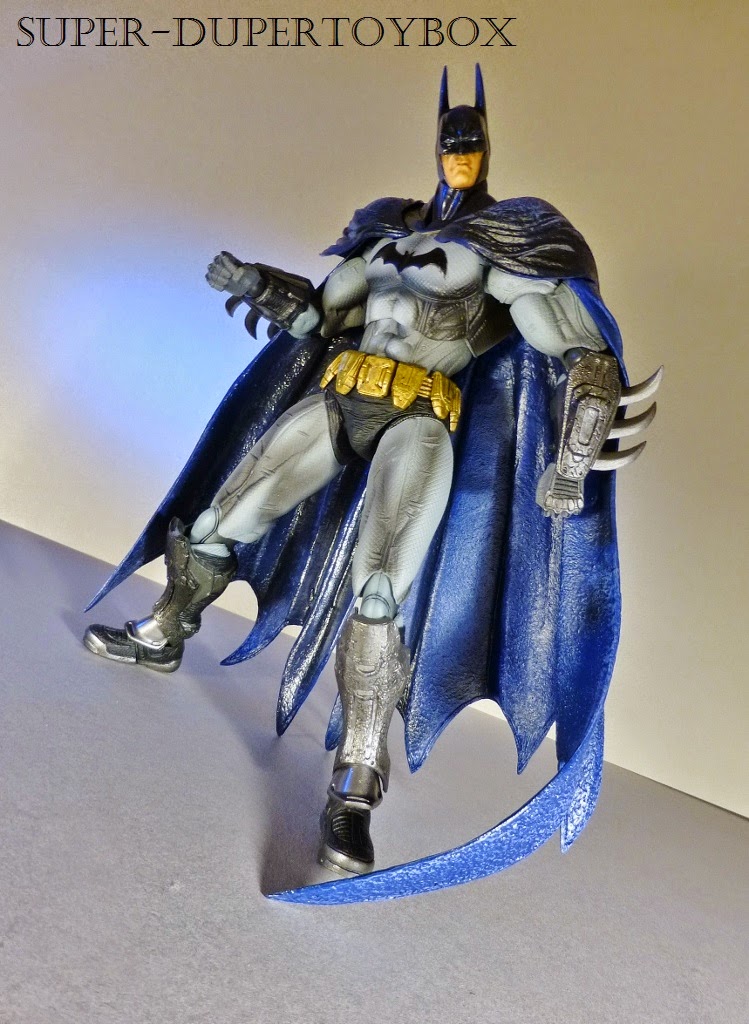 Batman's grapple gun has an interchangeable claw with cable in case you want to pose the tool deployed. The handle fits snugly in the grip of his pistol hand- it looks pretty great! 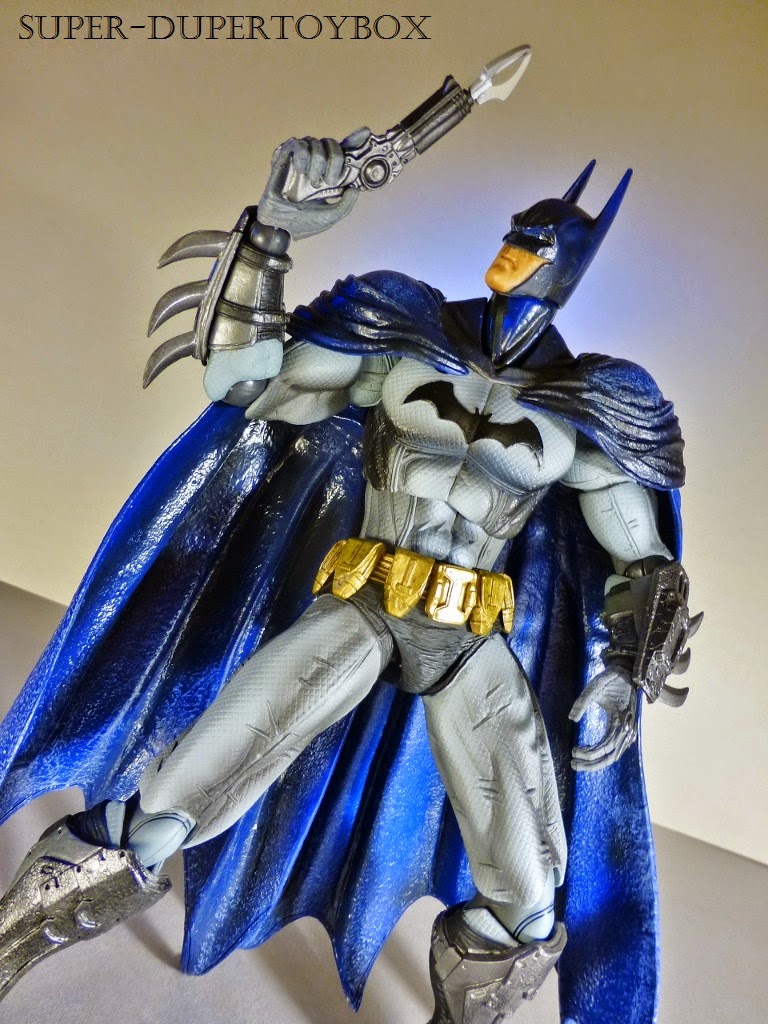 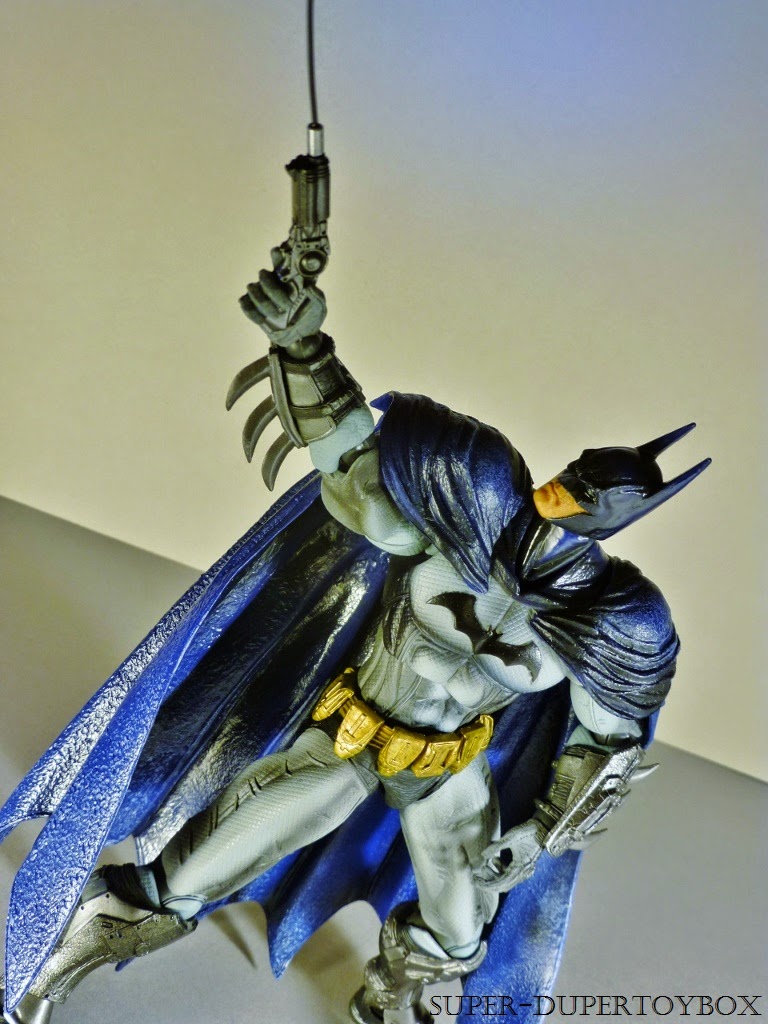 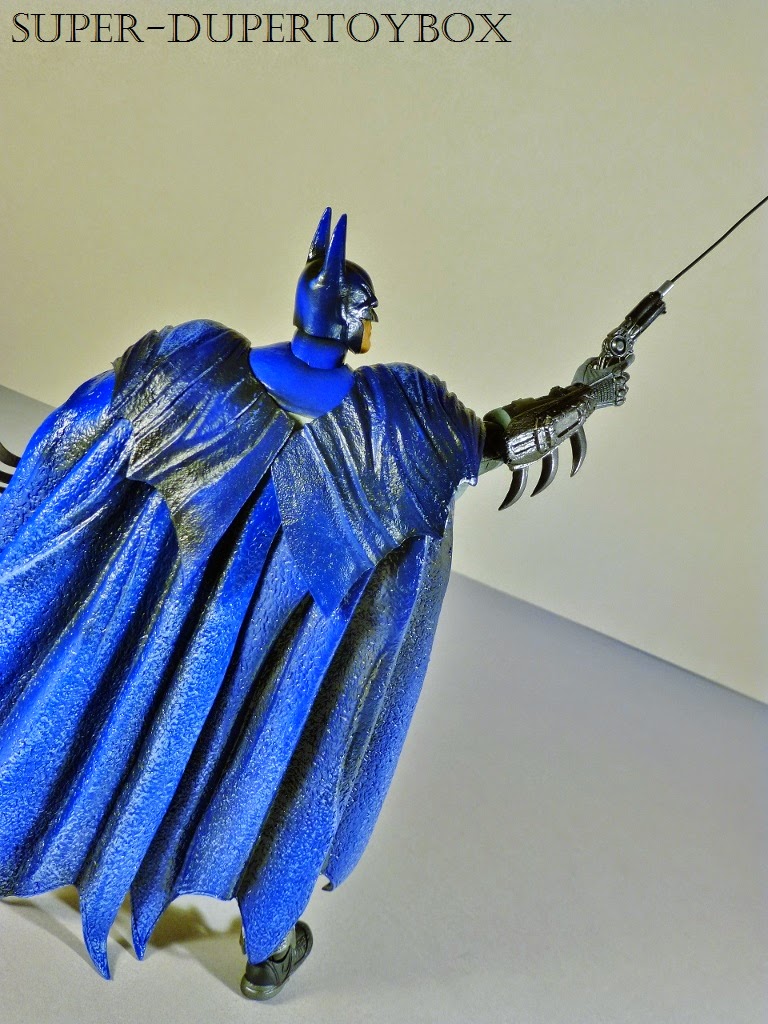 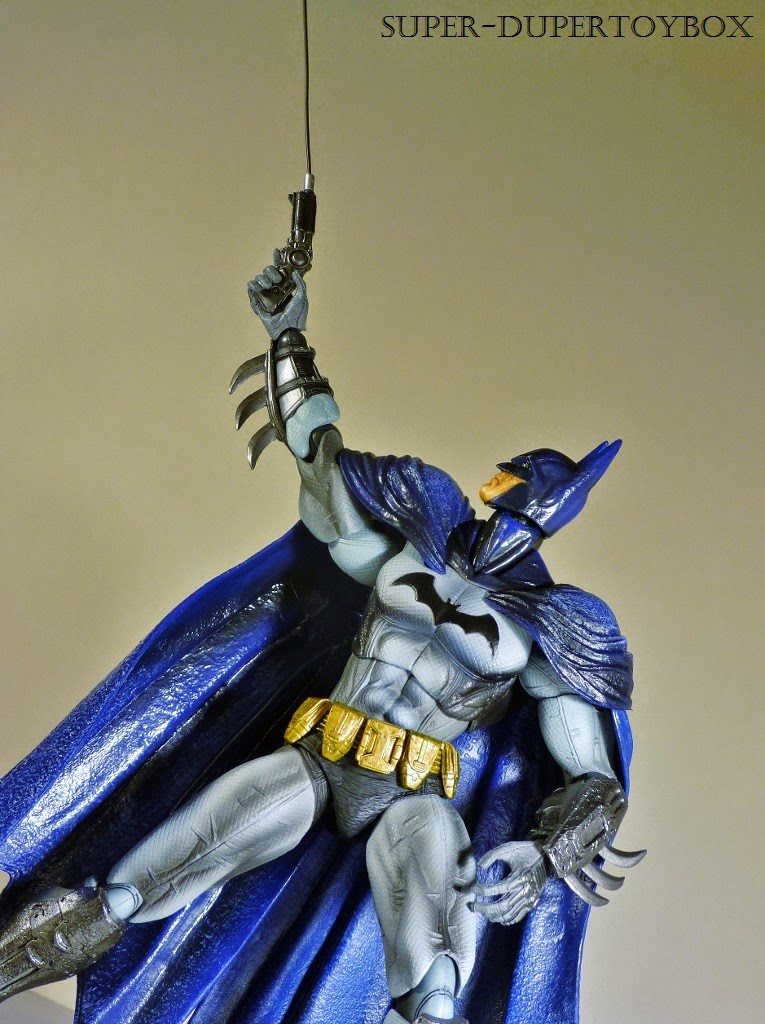 As previously mentioned, Batman's cape is somewhat a hindrance on the ground frankly- a little too heavy and low hanging for a variety of posing. With no holes on the soles of his boots, he can't borrow a pegged disc stand from any of my other figures (note the unique toe swivel on the boot), but this action figure seems best suited for display on a flight stand anyway. I'm somewhat disappointed one was not included considering the retail price for these- he'll borrow my Sideshow Batman's stand until I pick one up for him at the hobby shop. I think a short, saddle type doll stand would be most effective for standing and leaping poses. 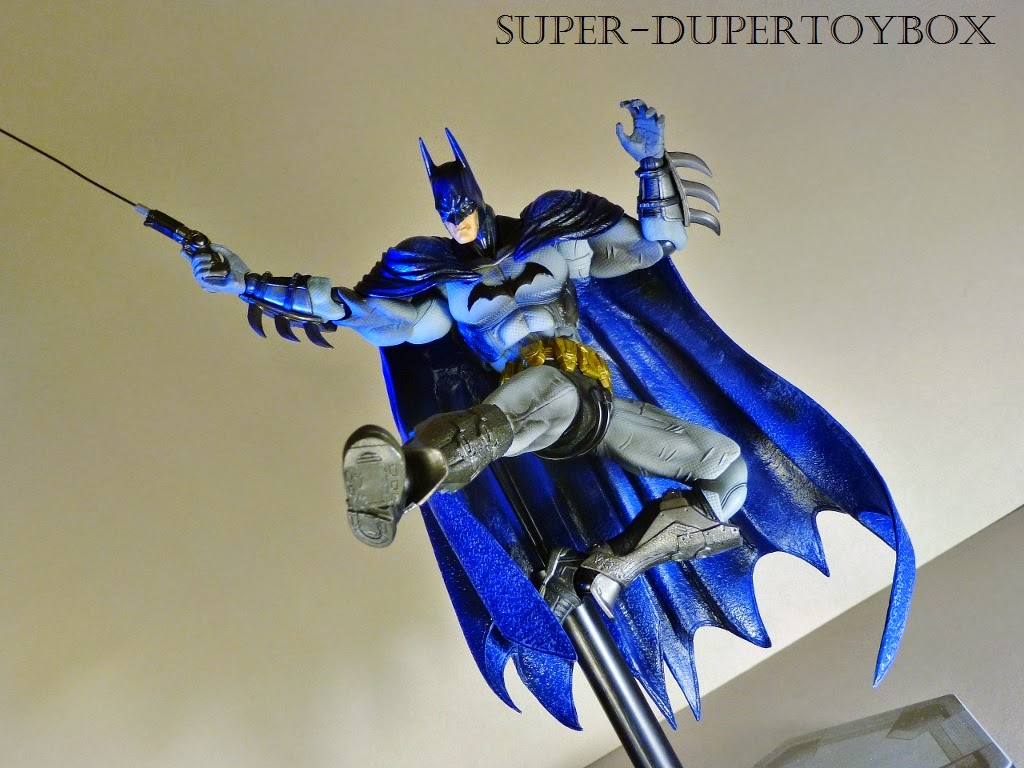 Batman holds his large batarang best in his trigger hand- an accessory every Batman figure should include... 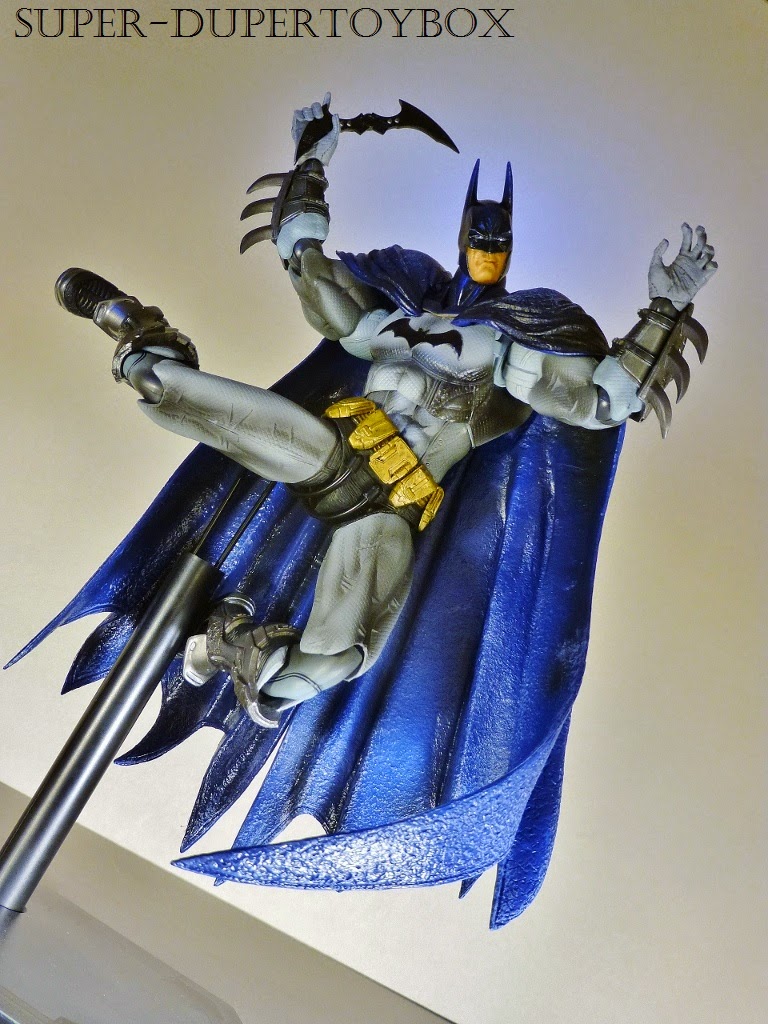 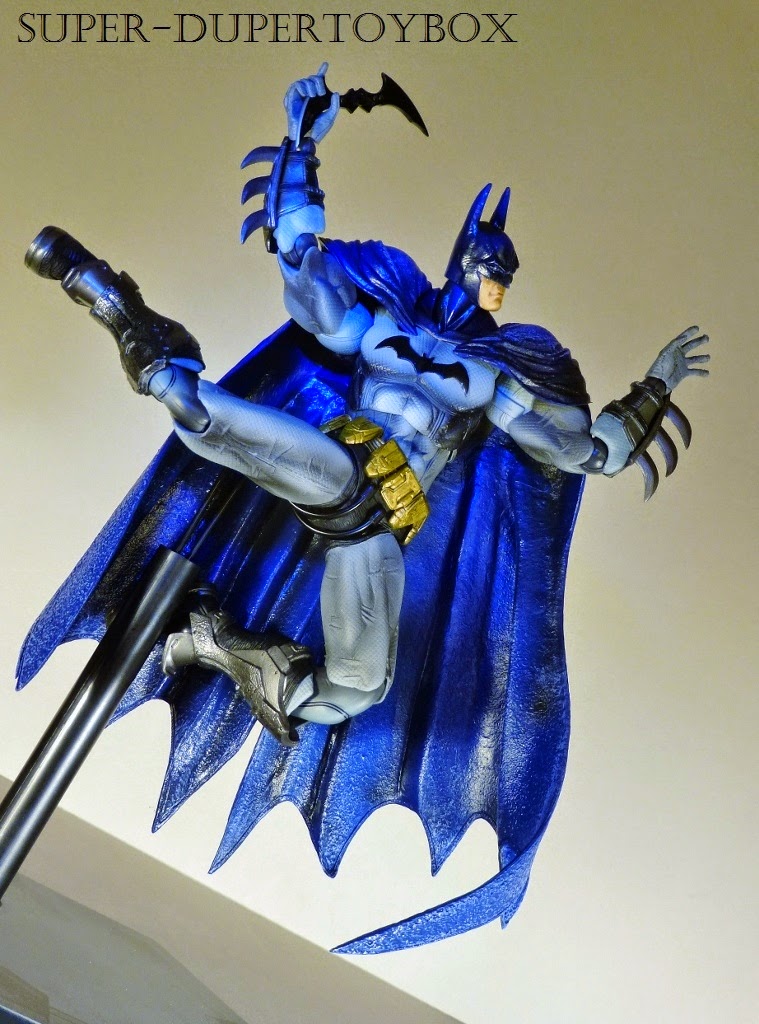 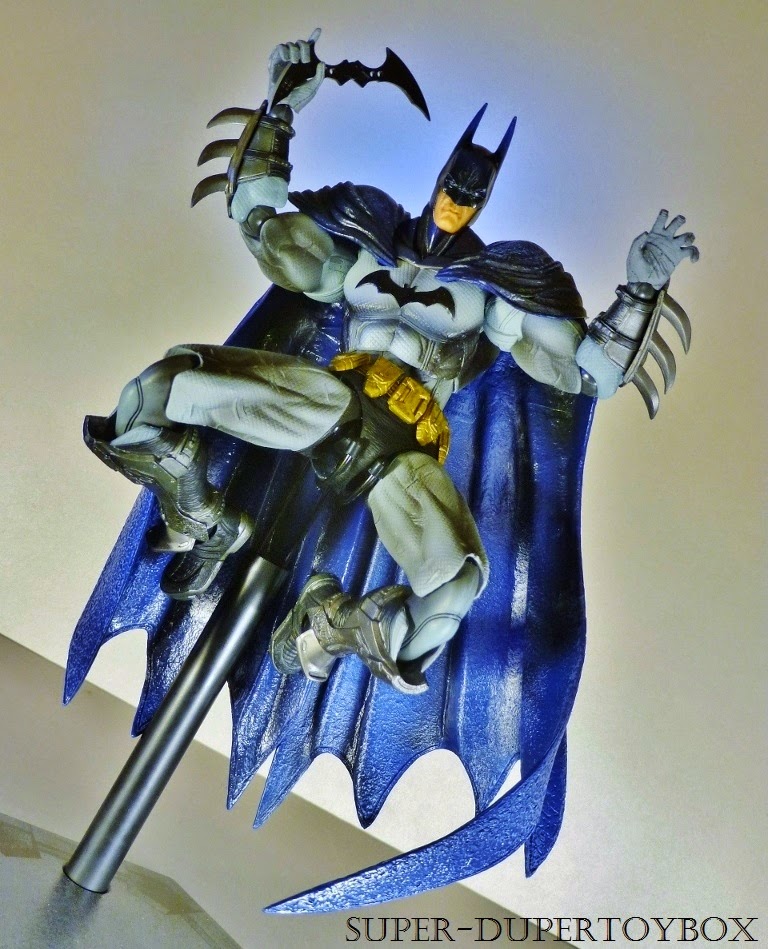 And finally, a favorite way of mine to play in the Super-DuperToyBox, BIGTOY/littletoy! Kai Play Arts Arkham City Batman with my DC Direct Arkham Asylum Batman: having the larger, more articulated Kai doesn't take anything away from the DC Direct for myself. In some respects, the DC Direct has a smoother presentation and more realistic body proportions, At any rate, I respect them individually for what they are, and am happy to have them both... 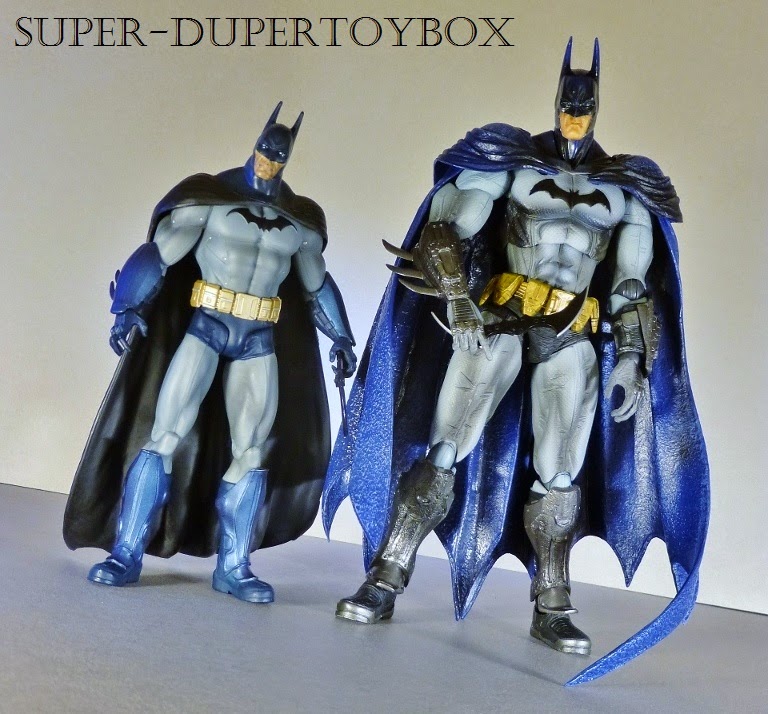