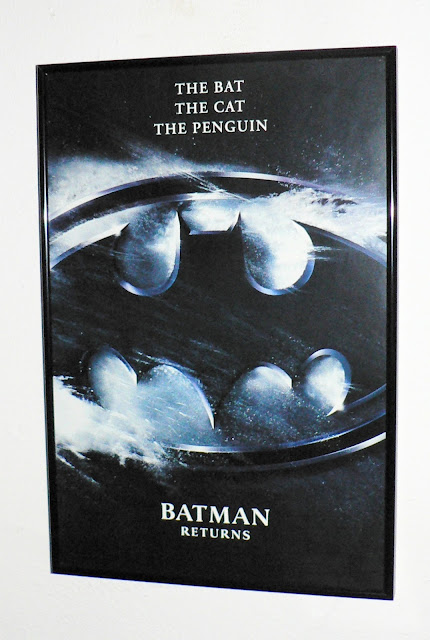 This past Thanksgiving I found a few treasured relics from playtime past, including some vintage Master of The Universe and Raiders of The Lost Ark action figures, a vintage Marvel Secret Wars figure, an old Tron tabletop videogame, and this killer 1992 Batman Returns poster!

I finally got around to drymounting and framing it in black. The poster was still attached to the wall of my old bedroom with four white thumbtacks- I hadn't given it much thought since those days, until I recently started reading comics, collecting toys, and blogging. It was in pretty good shape and turned out beautifully, a gleaming glass & metal prize- I LOVE it! Though released in June of '92, my timing is perfect as the setting of Time Burton's dark masterpiece was Christmastime, the snow swept bat emblem bestowing a chilly, noir feel to the herald of Batman's $80 million return to the silver screen.

I really enjoyed this movie, and still believe it may have been better than the first, Danny DeVito not to be outdone by Jack Nicholson's Joker swagger in the previous film, and instead delivering a visceral performance as The Penguin. It's safe to say however, that Michelle Pfeiffer stole the show as Catwoman in the opinions of most- she turned in a sexy delivery tinged with a saucy good-girl-gone-nuts aura- Riveting!

I just scored the new 1:6 scale Movie Masters Chris Reeve Superman at MattyCollector.Com, and if Mattel would be so kind as to release a Michael Keaton Batman I would be most grateful!

*Batman Returns at Wikipedia.Com
*Warner Video Batman webpage
*Interesting Batman Returns styled 1:6 scale Catwoman at ToyHaven... where does he get all theose Wonderful Toys?
Posted by Super-Duper ToyBox at 12:12 AM