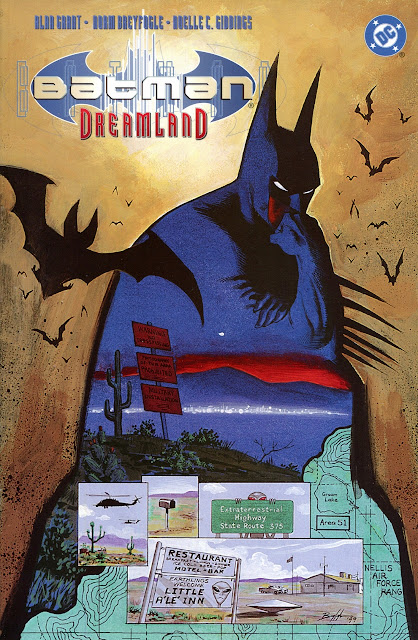 I found this thin TPB of  Batman: Dreamland (2000) in the used section of a local shop for about three bucks, and really enjoyed it. Artist Norm Breyfogle was working on the Detective and Batman  titles during my teen years, so I really identify with his angular style on the character. I've read descriptions of it as X-Files meets Batman, and it's received some less than favorable online ratings, but it was fun. Yes there is a certain contrivance to the government conspiracy/military madman plot, but the clandestine nature of the character lends itself to that handily, so why not? While I don't review comics in a comprehensive sense here on the Super-DuperToyBox, I would say if you read comics for fun, you would enjoy this. A certain amount of nostalgia should be accounted for in my sure certainly, but it was a fun read with little investment of time.

Breyfolge and writer Alan Moore had a good run on Batman from the late eighties into the early nineties that is celebrated to this day, introducing characters like the Ventriloquist and Anarky into the Dark Knight's gallery of rogues.Breyfogle is often overshadowed by Batman artists like Jim Aparo and Neal Adams, he did his own thing with the character, often venturing toward expressionism in his rendering. I learned that Breyfogle had a stroke in 2014, leaving him paralyzed on his left side and affecting the hand he draws with- it seems the comics community came together to help with expenses, DC Comics even rushing a compendium of his work on Batman, Legends of the Dark Knight: Norm Breyfogle, Vol. 1. This appears to be the kind of deluxe volume I'd love, full of stories of the Dark Knight of my youth!