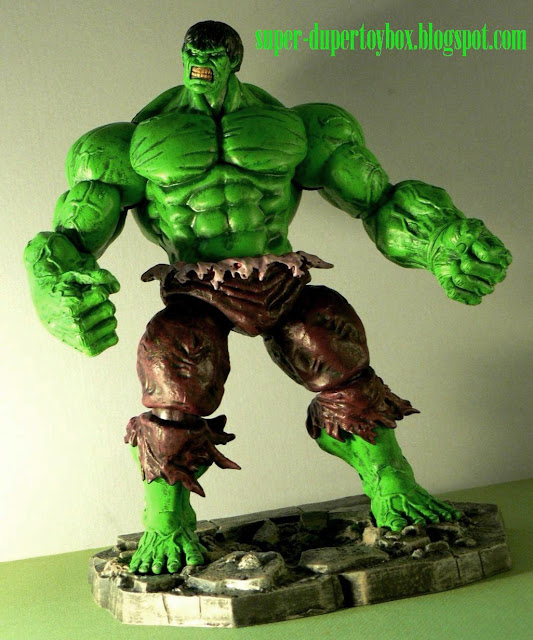 I forgot to mention what (laughs) came in the mail the other day: this HUGE Marvel Select Hulk!!  I'm unsure when the craving began exactly... I'm talking about the desire for some BIGGER action figures. I do remember panting over some larger Marvel Select figures on a couple toy bloggers YouTube channels this month, and the next thing I know I was on the hunt for this bad boy, a Marvel Select Thanos, and that killer Marvel Universe Frost Giant I scored on Tuesday. And when they release the Marvel Universe Sentinel in August, I'll likely be looking for it as well  :D  What can I say? I love toys! 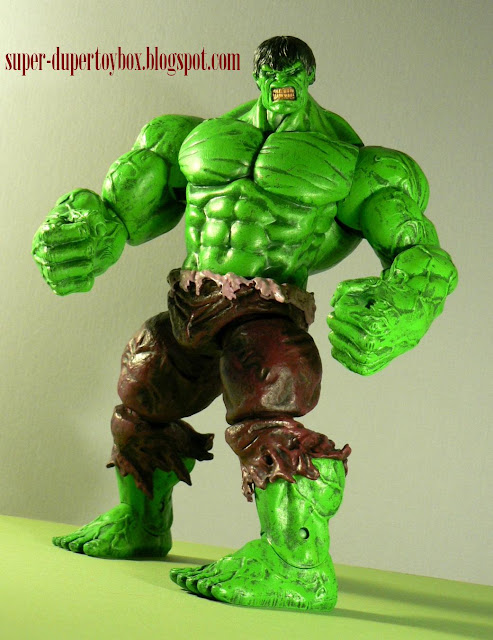 I'm often underwhelmed with Hulk action figures- they usually disappoint with their size, hopelessly inadequate and out of scale with other figures in their respective lines. Case in point: the old Mego Hulk was the same height and only a little bulkier than the other Megos. The Hulk should be HUGE- much larger than all the other figures!  And at a hefty 9 5/8" tall with a 12" armspan, this Hulk does not disappoint! 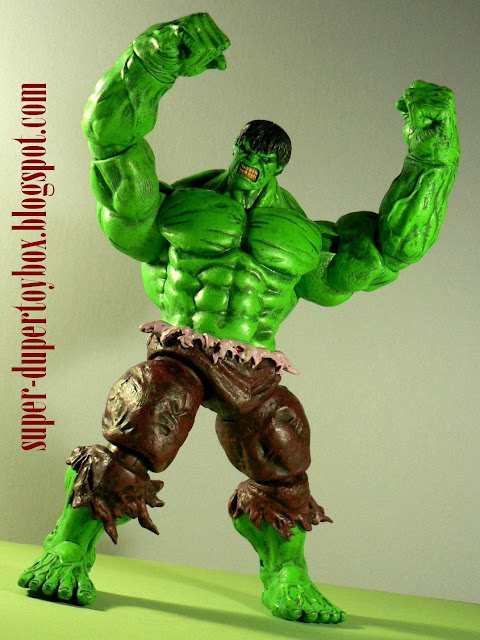 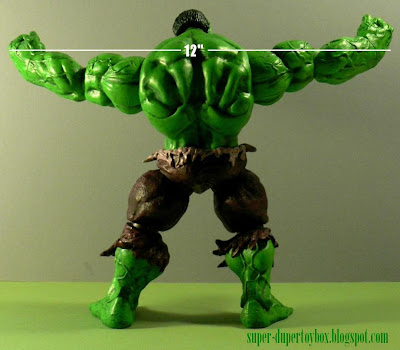 While my Famous Covers Hulk is nearly the same height, his girth is no match for the brawn of this Marvel Select. I purposely sought out the biggest, meanest looking Hulk I could find for under twenty five bucks (I scored this guy loose for $18.50, shipping included). As expected with a Marvel Select, the articulation is more limited than a Marvel Legends, but the sculpt & paint on this guy is outstanding. Hulk sports ball & hinge joints in his shoulders, elbows, hips, & knees. His wrists and waist have cut joints, while his ankles are hinged, and his head is on a ball joint that renders him quite expressive. The torn material at the waist and calves of Hulk's pants are molded in a softer plastic that gives to the touch, preventing breakage. Every inch of this figure is covered in artful detail: bulging muscles & veins, and painterly brushwork make this Hulk look like a three-dimensional masterpiece... ferociously beautiful! He looks as though he walked right out of an artist's canvas... 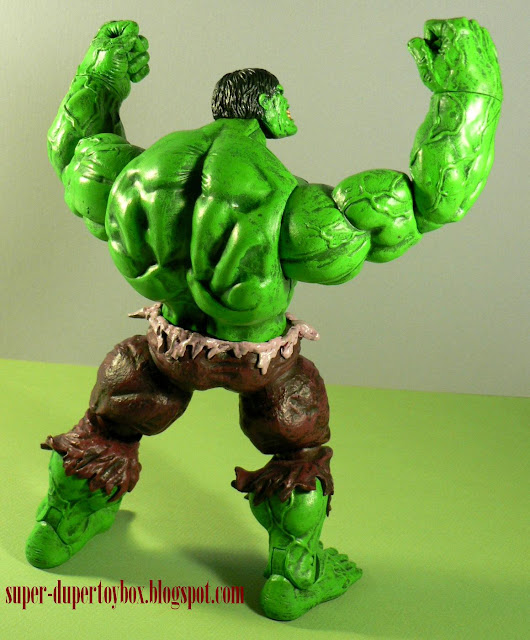 Some of the reviews on Hulk's face were positive, some negative- personally, I love it. The paintwork around the mouth was expertly done, and his clenched teeth & furrowed brow really capture the fury & anger that embody The Hulk. 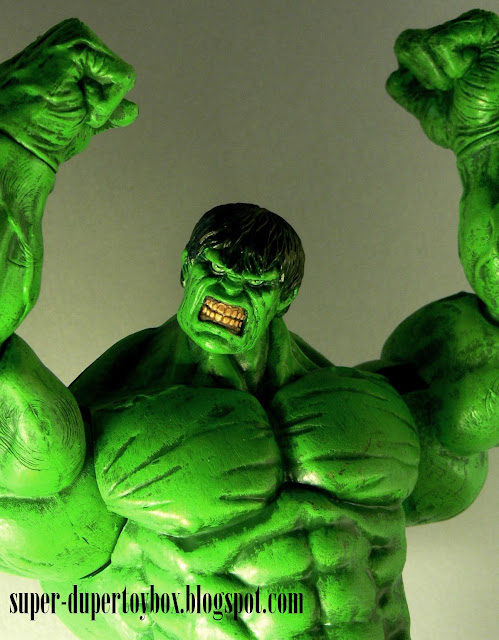 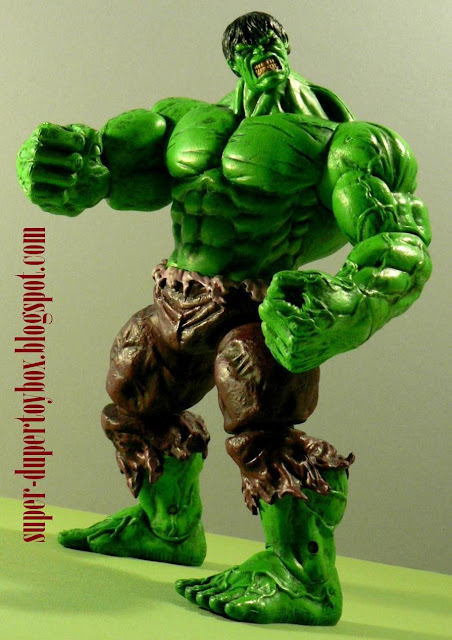 Hulk came with a great looking, if somewhat cheap & hollow, base that simulates a city street crushed under his mighty feet... 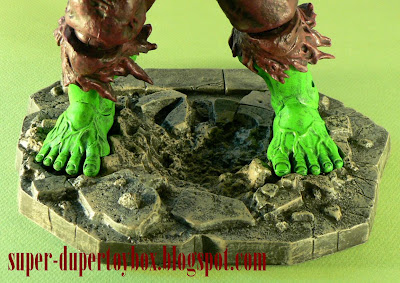 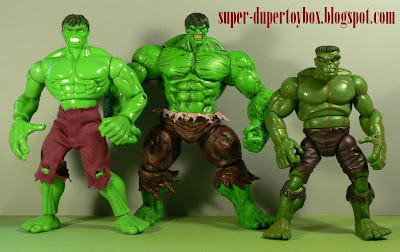 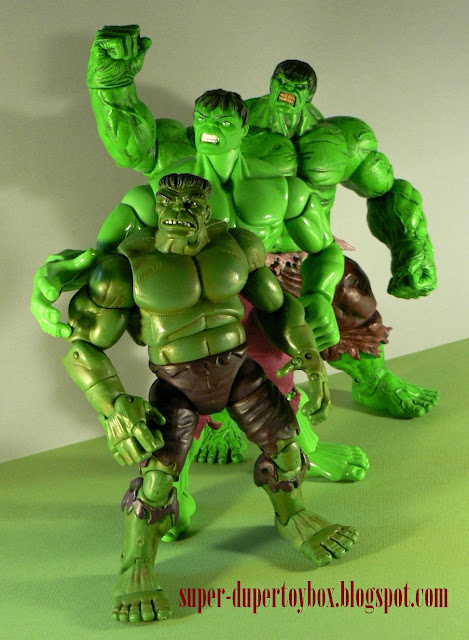 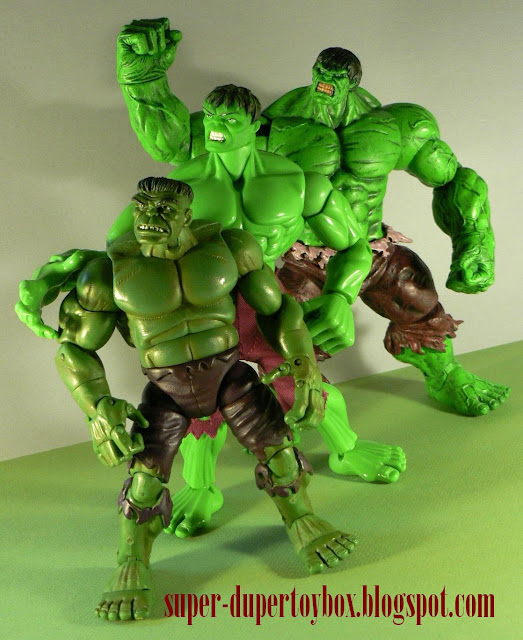 Be a GOOD KID- Go Play With Your TOYS!
Posted by Super-Duper ToyBox at 12:49 AM