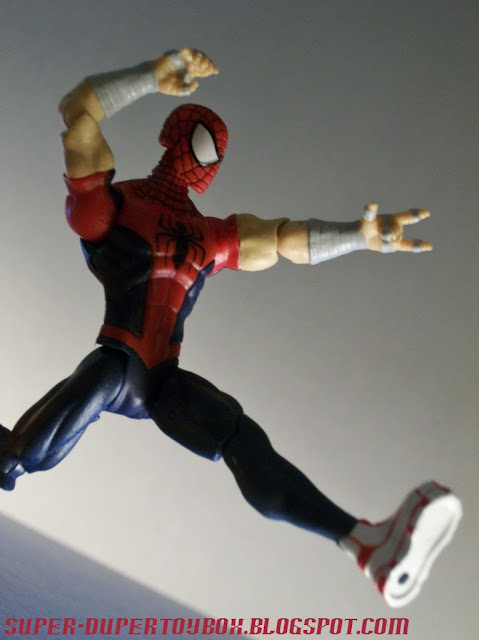 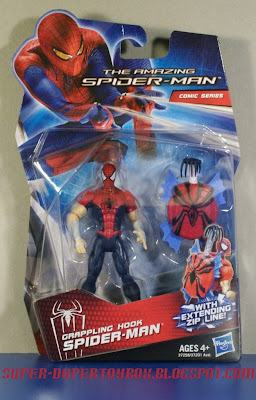 When I first saw Hasbro's most recent offering of 3 3/4" Amazing Spider-Man figures, I thought "Great, another avalanche of even more Spider-Man figures to clog up the pegs... haven't they sold us enough of those in the last couple years?"  I was sure the only one I'd pick up would be that killer Ultra-Poseable Movie Series Spidey, but after seeing a review of this Grappling Hook Amazing Spider-Man on YouTube, I started feeling different about the comic series figures in the line. Upon closer inspection, they are much beefier that the last series, and have a "back to the basics" simplicity that's nice. I've said before that for the price of these (this one $7.99 on sale I think) is high, but it seems the more deluxe 3 3/4" Marvel Universe figures are going up in price too, so... 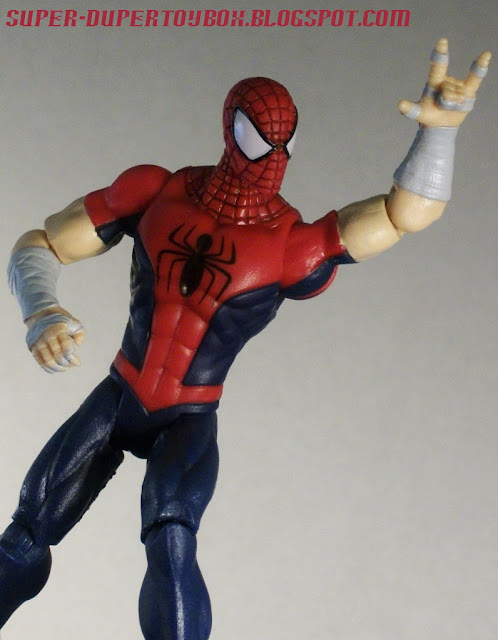 I realized while watching Pixel Dan's review of this figure recently that he's the Manga Spider-Man in the series, a character I'd just read about in Marvel Mangaverse. Sure, he's in the stock buck for the series, unlike the skinny boy from Mangaverse, but he does have big goofy sneakers and short sleeves. And well, he's more like the Mangaverse Spidey than the 70's Manga Spider-Man, Yu Komori. 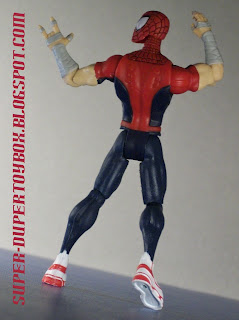 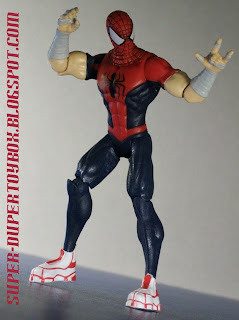 While I'd normally say it's a shame about the lack of articulation, I was surprised to find I didn't miss it. He has no bicep or wrist swivels, but he does have hinge-swivel shoulders and elbows that seem to do the trick. Spidey's hips don't rotate, but they do have a wide range forward and back, and he has hinge-swivel knees. His ball jointed neck doesn't have a lot of range, but it's better than a swivel. I couldn't put him down... I was playing with him. 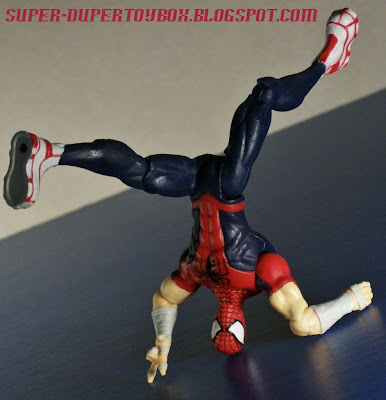 Since he has holes in his soles, you can stand him on a Marvel Universe base for more dramatic poses... 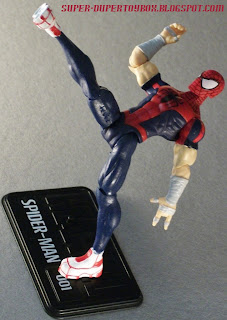 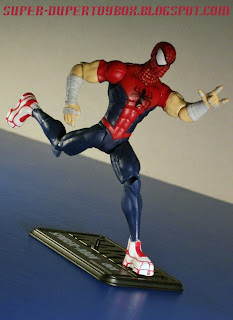 ... or just pick him up and fly him through the air like you're eight years old again. Hey, I still take a flyin' leap like this just for fun sometimes  :D 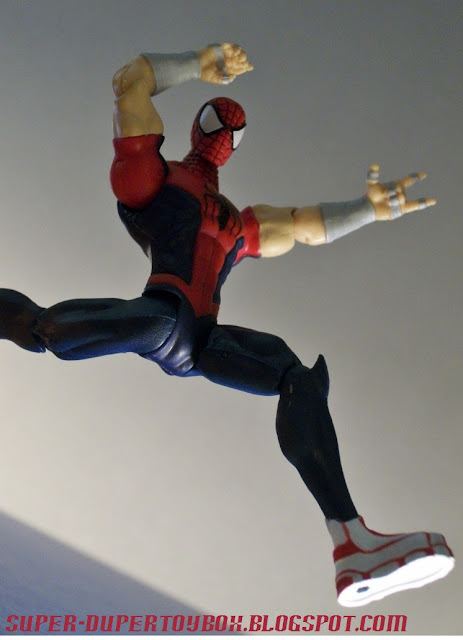 Spidey comes with his grappling hook accessory you can dangle him from- it's mostly useless, but it's kinda fun and kid's love that stuff. 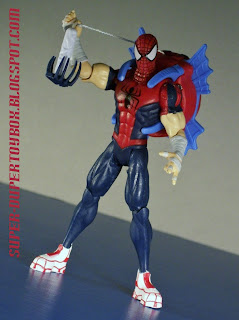 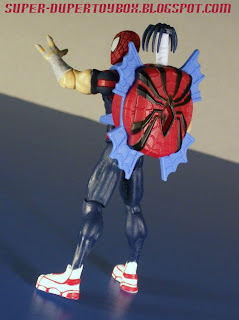 I love the sculpt and paint on this figure! His big eyes remind me of Todd McFarlane's 90's Spider-Man, which I loved, and the insignia on his chest is big and perfectly tamped. Spidey's paint is pretty good, and the borders of red and blue actually incised into the sculpt... love that. The black wash in the carved webbing on his head really looks great; as the other Spidermen in this series have webbed chests, only detailing the head on this variant is a stylistic choice. I enjoy this, the wrapped wrists, and even goofy sneakers... what can I say? I like reinterpretations of classic comic characters.

Grappling Hook Amazing Spider-Man with Ultra-Poseable Movie Series Spidey: I know the latter has better articulation, but I could not pick a favorite between these, honestly... 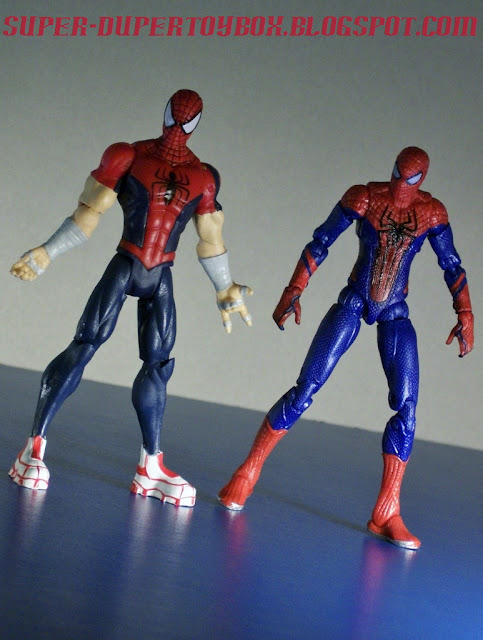 Who better to battle Spider-Man than my Power Charge Rhino... ?! 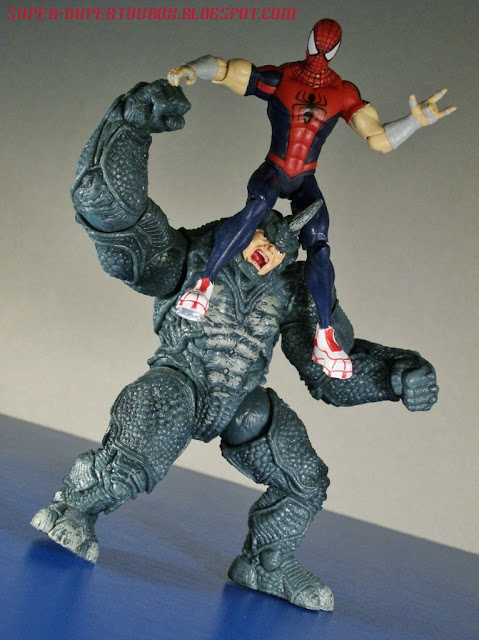 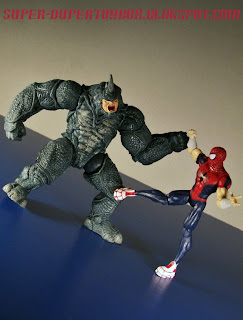 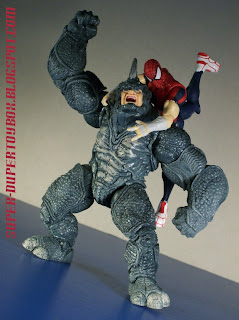 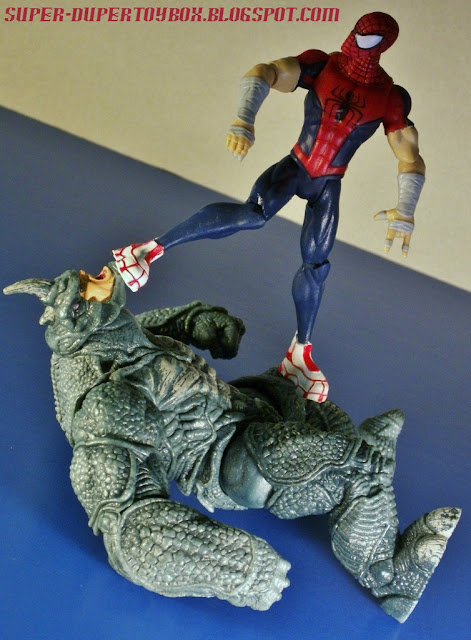