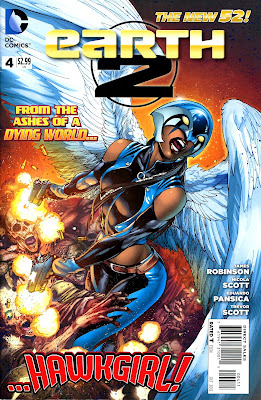 I got so caught up in the 90's X-Factor issues lately that I kinda left you hanging on that last time I wrote about the New 52 Earth 2. In reality, the last post about this book only drew jeers about Grundy's kinky leather dress!  But hey- I was curious  :D   No seriously- I'm not sure why Hawkgirl is the cover girl on issue #4. I mean, she looks cool, but this issue is really about Captain Al Pratt of the World Army, also known as the Atom. It opens with a vague, brief bit of Pratt's history, before we find Flash and Hawkgirl nearly overwhelmed by Grundy's creeping death. Alan Scott bullets in to save the struggling wonders, but fares no better, Grundy's injuries quickly healing after each of the Green Lantern's ring blasts. 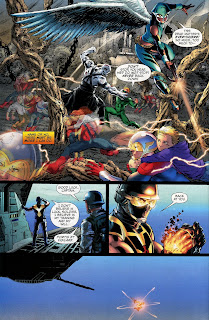 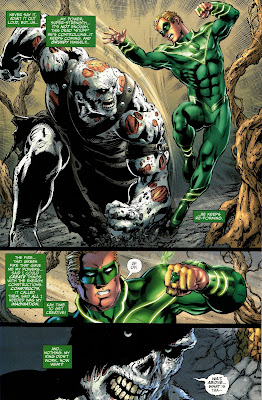 Pratt has been preparing to neutralize Grundy in the meantime however- leaping from a cargo plane, his atomic transformation completed as he stomps the evil creature into the ground before the astonished heroes... ! 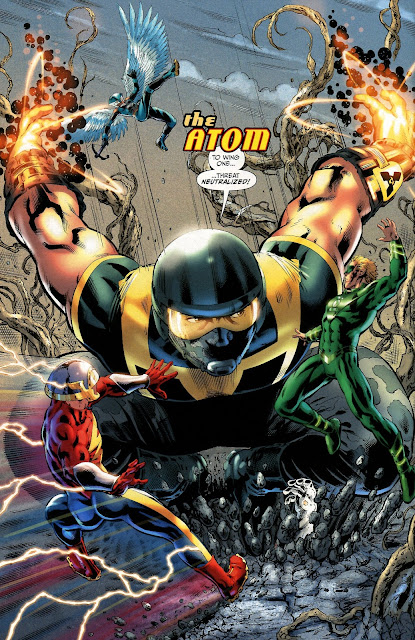 Kendra seems to know Pratt, confused by his larger than life arrival- his orders are to take her back, ordering Jay and Alan to stand down by order of the World Army Council. There have been many characters named Atom, but Al's size changing powers here are those of Atom-Smasher (Al Rothstein), godson of Pratt, whom I read about recently in some recent JSA trade paperbacks this year. Wikipedia compares the New 52 Earth 2 Pratt's costume to the one Damage wore, (son of the original Al Pratt), which I can definitely see. I was excited to see this revamped Atom-Smasher show up in Earth 2, in which Nicola Scott's gets a seamless assist from Eduardo Pansica on the penciling. While this book has felt a little light in content/thin, I've kept buying it for the art and have been pleased overall with the hero's wardrobe updates. My hopes of seeing more Superman, Batman, & Wonder Woman's cool new outfits were dashed uopn their deaths in the first issue of this book, but I do appreciate the JSA-inspired roster. 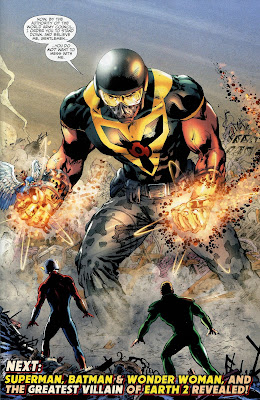 More Later-Make It FUN!
Posted by Super-Duper ToyBox at 9:39 PM