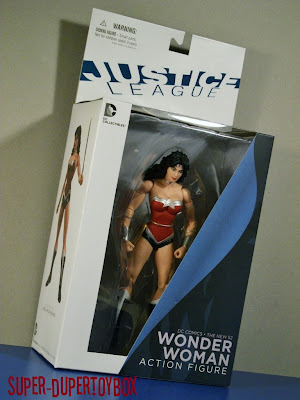 Just a couple days after finding the DC Collectibles New 52 Superman, I landed Wonder Woman at the same store- this is good in that V-Stock seems to be selling these for about five bucks less than everyone else. I hesitated a couple times at twenty-five bucks, but took her home for twenty. Wonder Woman's New 52 title looks interesting, and I liked Jim Lee's new suit design in Justice League. I love a strong female hero, and Wonder Woman is the archetype by which all others are measured. 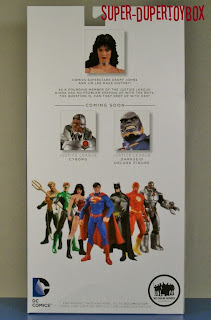 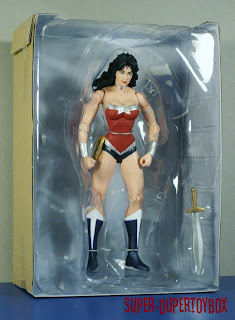 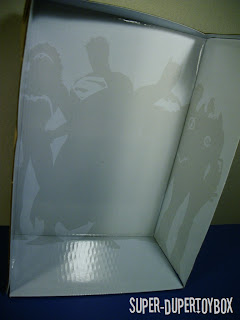 I didn't say much about the packaging of these in my last post because it's kinda plain- not terrible, just plain. It looks nice enough, and shows the other figures released with the packaged figure, as well as the whole line of Justice League members in a row. Along the glossy white inner tray, the heroes are cast in light gray silhouette, which comes off a little weak and is easy to miss. The "unfurling" display window is nice however, and showcases the figure well. While it may be a waste of materials, a box makes it seem more deluxe. Though I'm medium on the design, I see what they were going for, and it does it's thing well enough. Sculptor Jack Mathews is credited on the right panel.
Inside the box is a very pretty figure. She resembles the Justice League Wonder Woman by artist Jim Lee well enough, and is a killer figure anyway if not. Diana has a lot going for her here... I'm not sure if it's just the childhood crush I still harbor, but does she not mildly resemble Lynda Carter in some of these shots? I swear!  :D 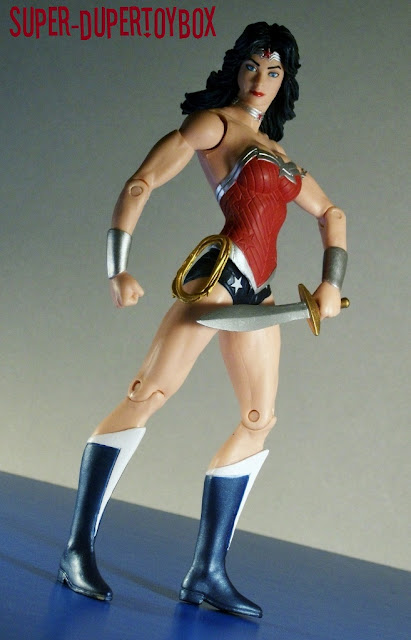 The sculpt and deco on this Amazon is pretty great- I love the new metallic blue & white boot treatment, and the silver eagle trim outlining her bustier, which has incised lines running vertically throughout and behind two stars etched at the ribcage and hips. The paint on mine has a little overpainting on the back of her shorts to the left, but the rest is pretty clean. She's a beauty! 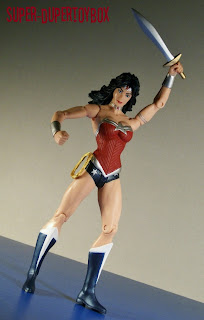 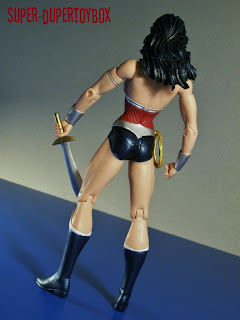 I love the darker tones of red & blue used here. It's not the first time Diana has undergone a wardrobe change, this one paying homage to the classic, Bronze Age Wonder Woman we loved in the Super Friends show on television, only toning down the primary color scheme. Gone are the yellow accents, save the golden lasso of truth, molded in a rubbery plastic looped permanently at her waist. Diana's flowing raven mane is still present, highlighted in blue just as in the comics. 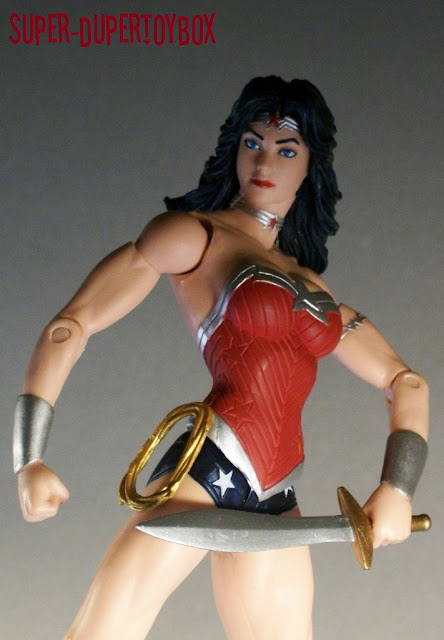 Wonder Woman came with a simple-looking sword that fits snugly in a hole running through her left fist. You won't need to worry about her dropping it while posing, speaking of which, DC Collectibles seems to have stopped giving us a base. Diana has a hole for a peg under her right bootheel, bust we aren't given a base, which would have come in handy- she stands alone somewhat tentatively. 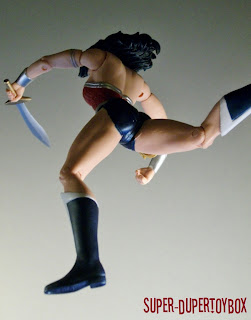 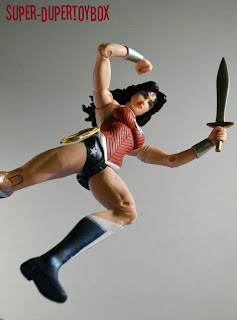 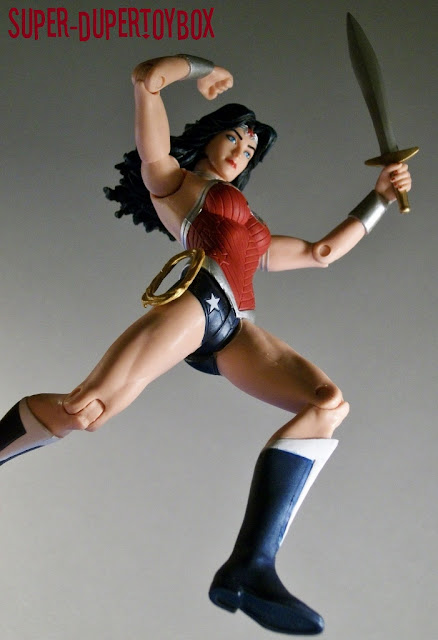 Diana has the same articulation as New 52 Superman: really limited. She has standard T-hips, single-hinged elbows & knees, but no thigh, shin, or wrist swivel. We also get no waist articulation, and though it would be helpful in posing, I can respect their decision not to disturb the sculpt on uniform. We do get some side-to-side tilt and forward motion on the head, but she can't look up. Even by previous standards, these New 52 Justice League figures are really limited in their articulation, but they really do look great. And while there were a lot of complaints about the new outfits, the members of the Justice League really haven't changed that much at all. These two make a great pair... 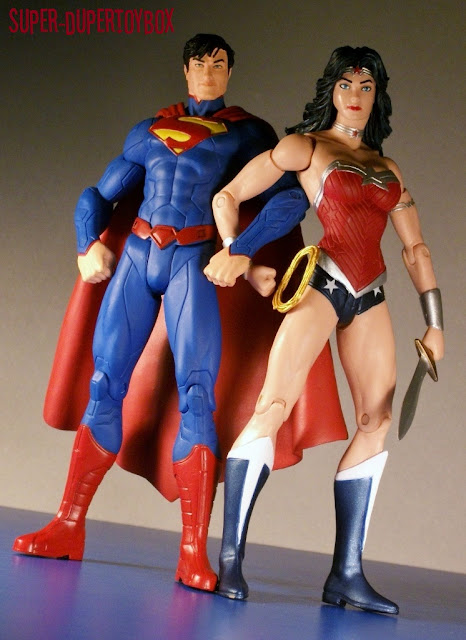 New 52 Wonder Woman with  New Frontier Wonder Woman- a very different design, but every bit as impressive an action figure... 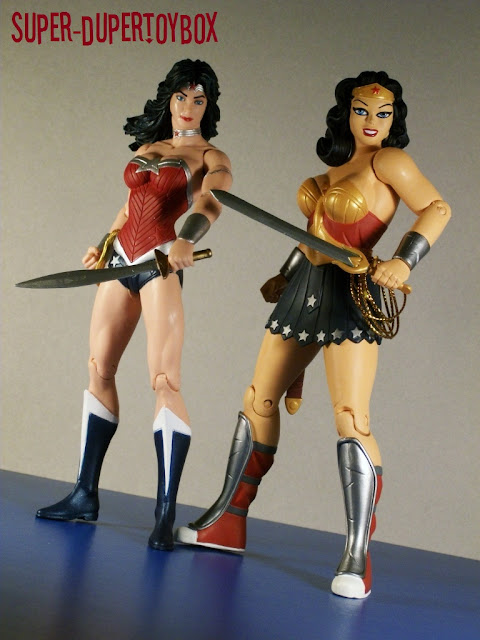 While on the subject of Wonder Woman figures by DC Direct, I also have the All Star Comics Super Squad and Trinity versions from 2008, pictured below, the latter of which has similar packaging to the new 52 Wonder Woman, but also includes a shield and base!  Visit the DC Direct Action Figure Archive! 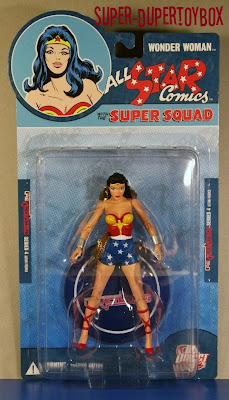 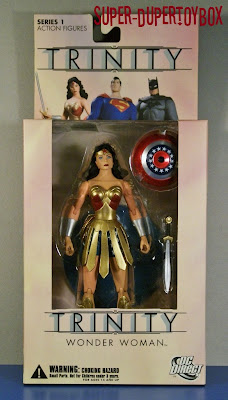