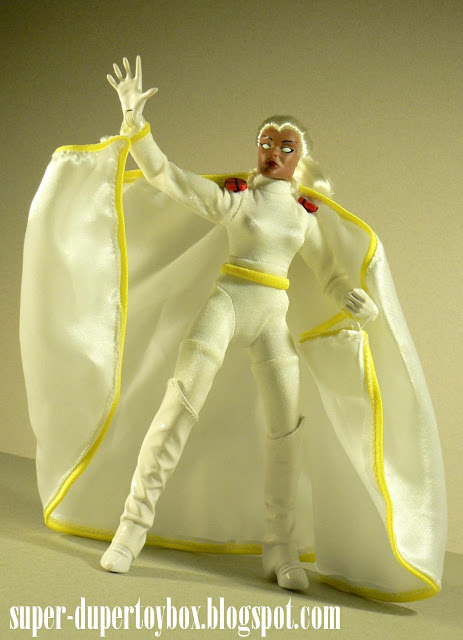 According to Thomas Wheeler's "Flashback Review" on these, this is the second version of Storm in ToyBiz's Famous Covers line of 9" dolls action figures, created for the X-Men movie line of toys. I have dug deeply into the outer internet space and found zilch on her. I scored this on eBay quite some time ago from a seller who also had a Storm and Wolverine in black leather outfits styled after the movie outfits. He wasn't asking much for any of them, and I bought this white Storm on am impulse. To be honest, I can't find a thing about her on the internet- she might be somewhat rare! 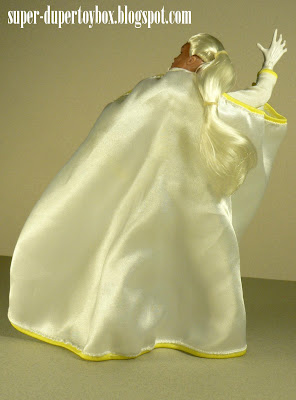 She has a silky-feeling, luxurious cape- really nice! Some of the Famous Covers females looked as though they were ...a miss. But not Ororo, here- she's one of the prettiest dollies I've ever seen!  :D   The paint apps on her delicate face are flawless. Her head is on a ball-joint, too, making her more expressive than many of these sometimes "clunky" figures. She's a dainty flower. Ororo came to me with her silver mane banded in a long ponytail which I never let down- who would ever cover that angelic face?! *GASP* 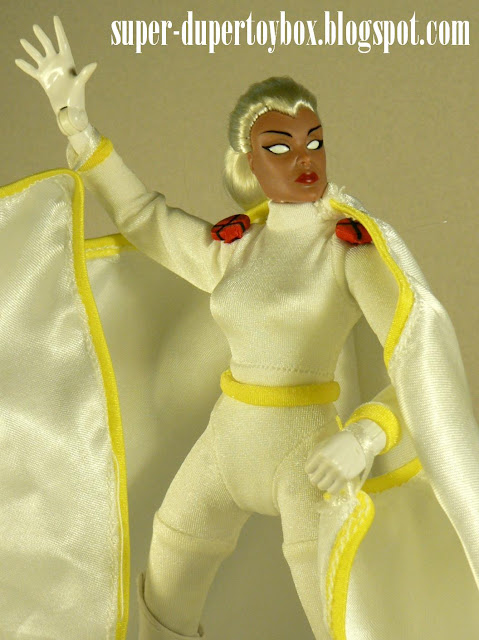 The put some cool boots on this girl, thigh-high and fashioned from vinyl, simulating white leather. She does not like to stand in them, however. She definitely needs a doll stand. I just sold her off, so that's someone else's problem. Yeah, that's right... we broke up. 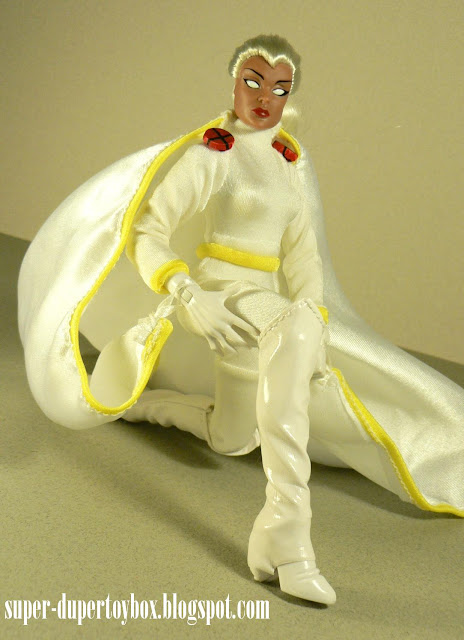 I had an initial photo session with this diva, and put her in the glass cabinet directly after where she lived the rest of her time with me. It's funny, feeling now I never appreciated her until I had her sold... maybe she was, ummm... a little too much like a Barbie doll pretty to live with me. Not that there's anything wrong with that!   :D   All joking aside, I've just been trying to thin the toy collection lately. Thankfully, I got a few decent photos of her before she left. I... I think I miss her...  Women! 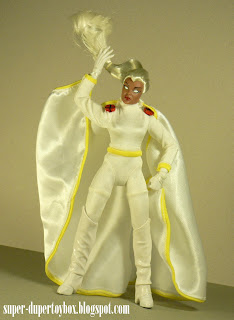 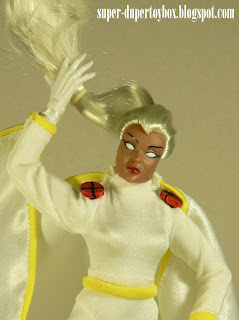 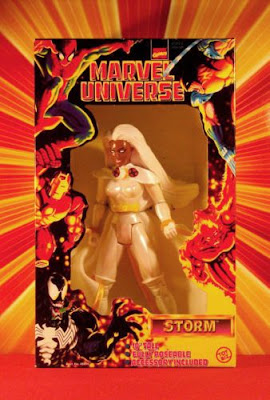 Believe it or not, I have another Storm figure by ToyBiz- one of those 10" Marvel Universe figures from the 90's. I've never opened her, and in retrospect somewhat wished she'd sold instead. While researching the Famous Covers Storm, I found that a 12" Storm that looked a lot like a Barbie was produced at some point- she was in white as well, and even included a casual change of clothes & accessories. If Hasbro produced a 3 3/4" Storm in white I'd buy it. I liked the Storm in the Marvel Universe Giant Size X-Men box set- Slangards gave her a thumbs down over at Joint Junkie. I wonder if Hasbro will take another whack. They gave us 35 Wolverines, after all!
Here's a shot of Storm with my Hasbro Cyclops- they made a dashing pair, don't you think? 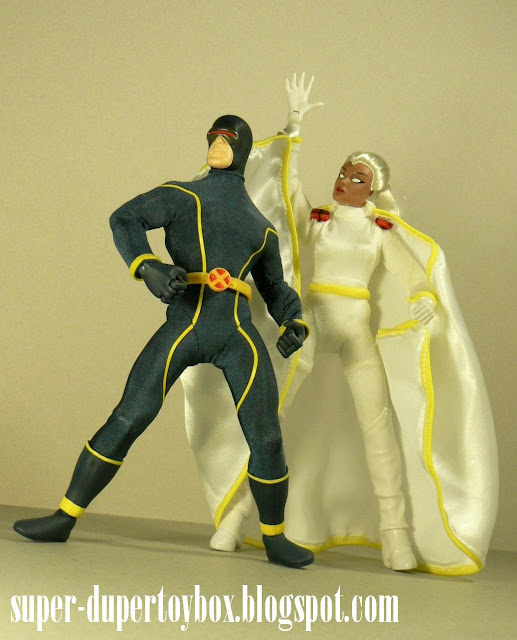 I've learned a lot about Storm recently. I was unaware that Ororo married T'Challa (Black Panther) in 2006. She was created by author Len Wein & artist Dave Cockrum for the famous 1975  Giant Size X-Men #1 comic- I discovered who Cockrum was simultaneously, having read about him recently on Tony Isabella's blog. I've recently read some of the early 60's X-Men and 80's Uncanny X-Men. Chris Claremont took over the latter after Wein & Cockrum's Giant Size, fleshing out her backstory and making frequent use of the popular heroine in all the X-Men story arcs- even making her the leader of the mutant supergroup when Cyclops takes a leave of absence. 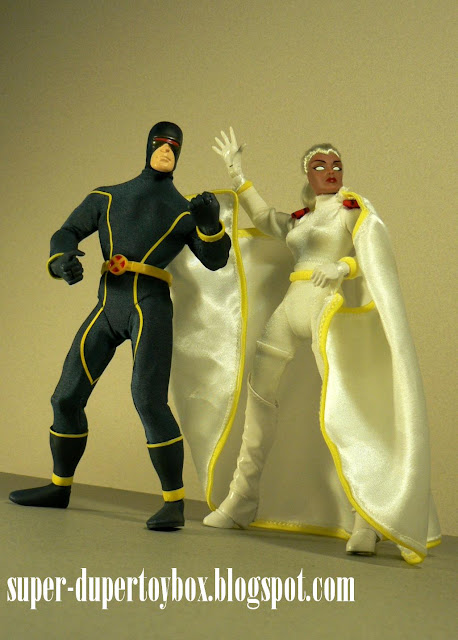 Ororo Monroe was the descendant of an ancient line of magic African priestesses, their shared physical traits that of white hair and blue eyes. She was orphaned at five, her parents killed when an airplane crashed into their home in Cairo, Egypt.  Found by a gang of street urchins who trained Ororo in the arts of thievery, she quickly became the star pupil of their master, Achmed el-Gibar. This was how Storm first met Professor X, having tried to pick pocket him long before she knew the extent of her mutant powers, and before he recruited her to the X-Men. 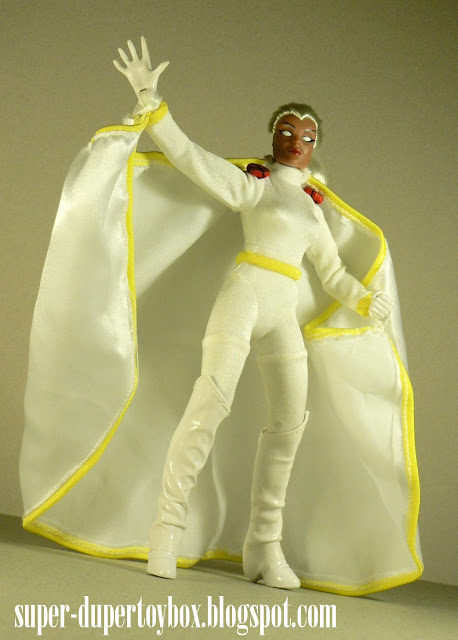 From the Comic Book Database:
Storm  possesses the psionic ability to manipulate weather patterns over limited areas. She can stimulate the creation of any form of precipitation such as rain or fog, generate winds in varying degrees of intensity up to and including hurricane force, raise or lower the humidity and temperature in her immediate vicinity, induce lightning and other electrical atmospheric phenomena, and disperse natural storms so as to create clear change. Storm can direct the path of certain atmospheric effects, such as bolts of lightning with her hands, and manipulate ocean currents. She is able to fly by creating winds strong enough to support her weight, the weight of others, and to propel her forward through the air. Storm can thus travel as fast as any wind can, and has reached speeds up to 300 miles per hour. Her powers over the atmosphere enable her to breathe at any speed, protect her from air friction, and grant her limited immunity to extreme heat and cold.
More Later- Make It FUN!
Addendum 1/7/12
This figure was included in a "X-Mutations"2-pack that also featured a Halle Berry Storm from the X-Men motion picture (2000). A similar box set was also produced for Wolverine: 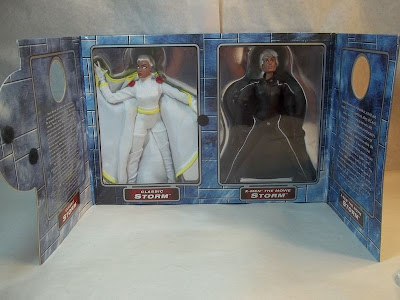 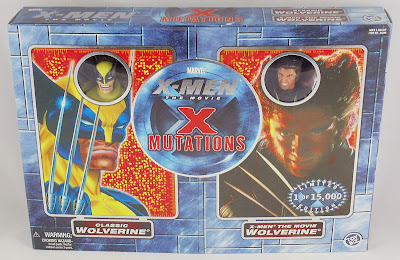 Posted by Super-Duper ToyBox at 2:04 AM