I found Seven the Hard Way & Romulus from the Wolverine Origins Series on Amazon for south of seven dollars after buying that Marvel Universe Greatest Battles Wolverine Vs. Silver Samurai 2-pack at the end of August. Instead of a reprint of Wolverine #2, which the cover advertised, the said action figure set included one chapter from the Seven the Hard Way book (the one with Silver Samurai, of course). While I felt let down by this, I resolved to find the source of this chapter, and get the rest of the story. Well at least I got some of the rest of the story- in realizing this Romulus character had a lot to do with it all, I picked that book up while on line, quickly realizing the whole tale has been collected in TEN trade paperbacks! That almost made me regret having discovered the story arc   :D   I might eventually get some more of these as time & money allow, because while I've read some negative criticism about this series, I genuinely did enjoy them. 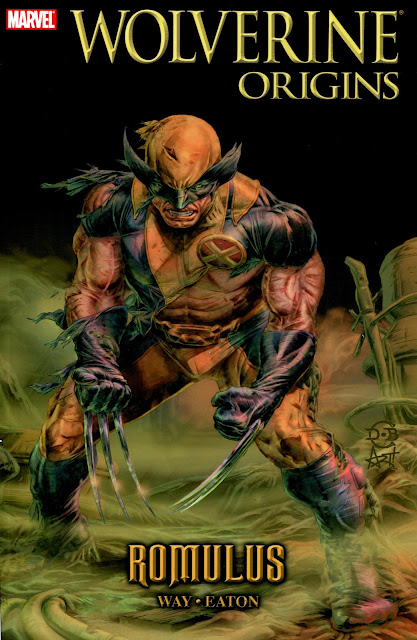 While Doug Braithwaite did the covers for both, Scot Eaton did did the pencils inside Romulus (Marvel, 2009), which were superb. Bravo! He did an awesome fight scene between Omega Red & Wolvie, and another with Romulus himself, the latter leaving our hero unconscious on the floor at the end of the book. This book sees Wolverine realizing Romulus' plan to pit Wolverine against the like of Omega Red, Sabretooth,  & several other villains, all in order to stage a confrontation between Wolverine & his son Daken- the winner to be Romulus' successor, the future of  the next generation of Weapon X.
Daken and a lot of these other characters were all new to me..After the Winter Soldier kills Wolverine's wife Itsu, Romulus cut baby Daken from his mother's womb and later brainwashes the boy, as he did his father for most his life. Daken grew up to take his father's name as part of the Dark Avengers in the "Dark Reign" story arc. This was all news to me, my return to reading comics having only begun a year ago, and I read a lot of DC stuff during this time- Marvel is an entirely other HUGE universe I've lots left to catch up on *sigh*... 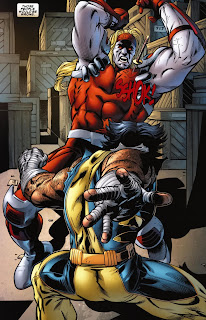 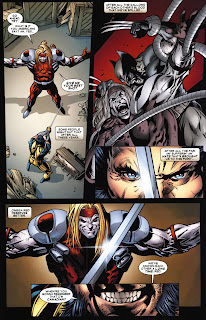 Seven the Hard Way follows behind Romulus, Wolverine seeking seven allies to take the fight to Romulus and avoid fighting Daken to the death, fulfilling Romulus' wishes for Woverine's death & finding an heir to the power he's accumulated over the decades of villainy. Bruce Banner and son Skaar, the Silver Samurai, Cloak, & Dagger all appear in this book. No one is eager to become tangled in Wolverine's problems either, Skaar nearly killing him when he won't accept Banner's initial refusal, Silver Samurai attempting the same when Wolverine seeks training for the powerful Muramasa blade. and the mysterious Ruby betraying him after he broke her out of The Raft, a prison for super villains. Deadpool is shown in the ending page, his part in the plan to be revealed in the following book and conclusion to the series, The Reckoning, I assume. There is a Wolverine Origins: Deadpool book earlier in the series that may be worth looking into as well. 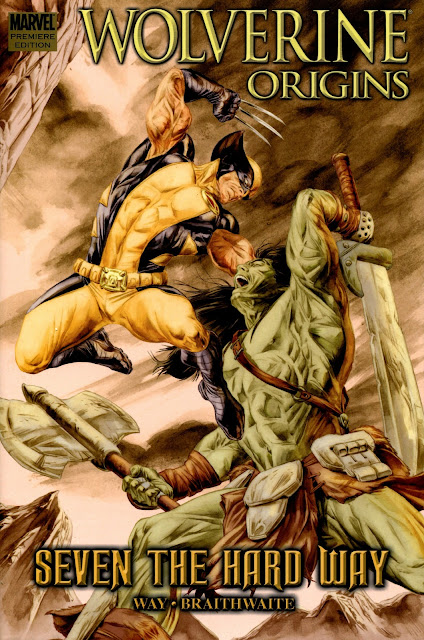 Doug Braithwaite did the pencilling here, Bill Reinhold's inks & washes lending a painterly touch to the art. Some might not be a fan of this departure from more conventional comic art styling, but I thought it was different and a unique change of pace, some of the splash pages appearing more like a fine art painting or illustration. I enjoy this approach from time to time, and thought the artwork was great. I liked author Daniel Way's storytelling & dialogue in both these, Wolverine's exhausting journey to absolution made palpable through all the torturous conflicts he's put through, maimed and/or nearly killed several times and in a variety of awful ways through the two books- pretty gruesome! 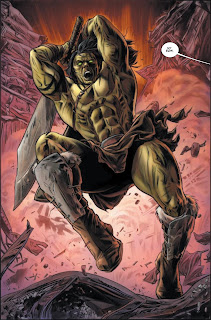 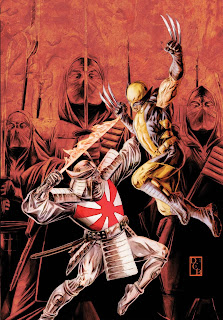 As I've said before, my return to reading comics having only begun a year ago, I've lots left to catch up on. My point isn't to present conventional review of these comics I report on here at the Super-DuperToyBox, but rather to share in my journey & perhaps receive suggestions and/or opinions from some of you. I'm not just trying to gather the world's largest collection of plastic over here after all- I'm generally interested in the stories behind the action figures we collect. It's the books & comics that make the whole thing an experience! I'm hardly qualified for critical analysis of this or any other type of literature, and I never liked doing a book report, but I'm very intrigued and, of course, having FUN with them.  :)

Some comics blogs I like:
Again With the Comics
Bronze Age Babies
Bully Says: Comics Outta Be Fun!
Continued On 2nd Page Following
DC Bloodlines
New readers... start here!
Trade Waiting Tales
What Was That Issue Again?
The Idol Head of Diabolu  (all Martian Manhunter, all the time!)
Comics Bronze Age
Steve Does Comics
Marvel Genesis
Posted by Super-Duper ToyBox at 9:27 AM