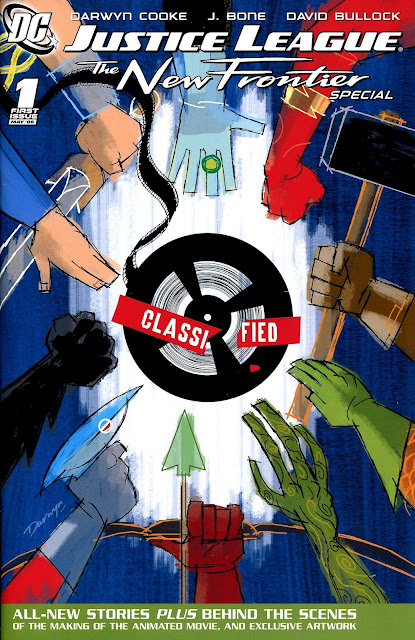 This 3-story book was published in celebration of the Justice League: New Frontier DVD release I mentioned in my last post. It contains a "lost chapter" from Darwyn Cooke's book, stories featuring two other artists, and a behind the scenes look at art development for the animated feature. It was included in the DC: New Frontier action figure boxed set I bought in 2010, but I stumbled onto it again, and thought I might give you a peek inside!

The first story, or "lost chapter", is important in that it explains the story behind the original novel's brief newspaper snapshot of Superman fighting Batman, and how Batman came into possession of the "sliver of meteor" that protects him from the Kyrptonian he mentions to J'onn J'onnz  in New Frontier as well. Government agent King Faraday asks Superman & Wonder Woman to bring in the vigilante Bat-Man, per President Eisenhower's executive order. Diana gets a bad vibe from the whole thing, refusing to take part in what Kal-El insists is for "the greater good". 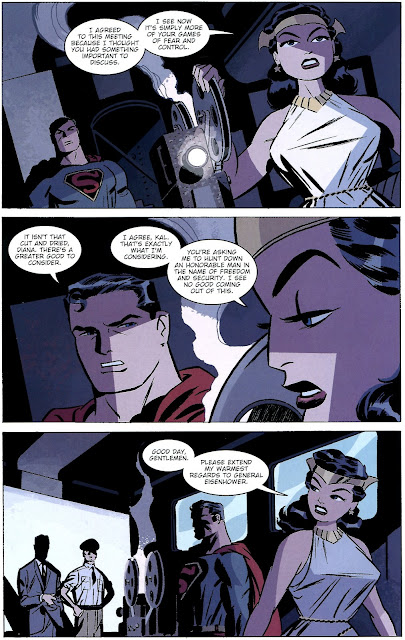 Superman meets President Eisenhower at  Mount Rushmore later to talk about his own conflicting issues with the situation. This President-to-Superman banter reminded me a great deal of Ronald Reagan & Superman's relationship in The Dark Knight Returns, the President referring to the Kryptonian as "Son", and Superman acquiescing to his wish to bring Batman by the end of the conversation. "If it helps you can consider it a presidential order", panders the sympathetic leader in conclusion. 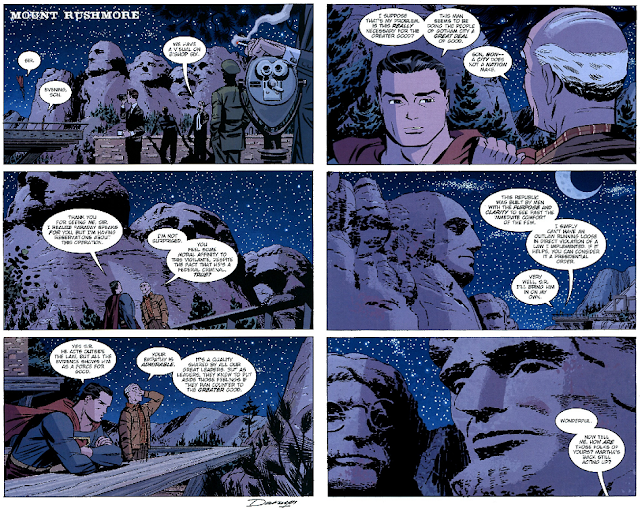 But to Superman's surprise, the Bat-Man is ready for his arrival, beckoning him to the city junkyard with a searchlight, where the vigilante uses all at his disposal to lead the alien into his trap, including a chunk of Kryptonite stolen from someone you might suspect, by someone you'd never guess! Elements of this plot and character traits both remind me of Frank Miller's Dark Knight. Some of the inner dialogue and Alfred Pennyworth's dry humor about Wayne's "exemplary parking" are just great here during the conflict... 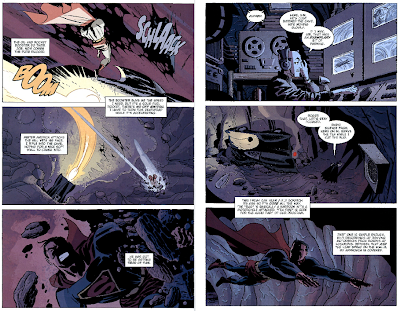 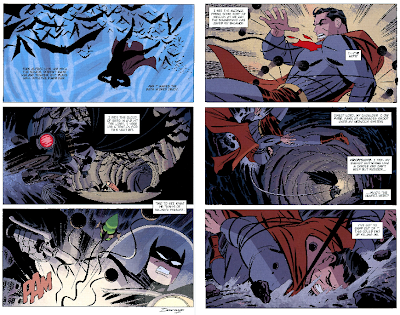 Batman ends up dragging Superman by the face behind his motorcycle toward a containment built for the alien before crashing, where Wonder Woman appears on the scene to break up the fisticuffs. I love the retro outfits in Cooke's artwork- the longer shorts, darker colors, and more reasonably proportioned bodies remind me of the old Fleischer & Famous Superman cartoons from the 1940's- Superman's red & black chest insignia in New Frontier is obviously a direct homage to this. I love that! 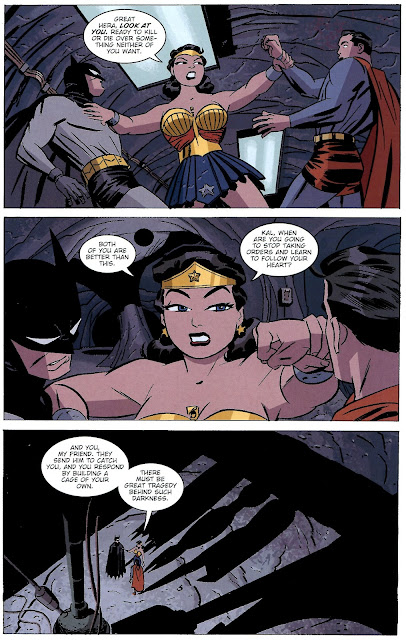 In the end, Diana suggests a plan to throw the feds off and keep Batman out of jail by staging a fight between the heroes before the public in which Batman wins & escapes. Though Kal is reluctant, she knows that their chance to shine together in front of the world will come later, and truly "for the greater good"... 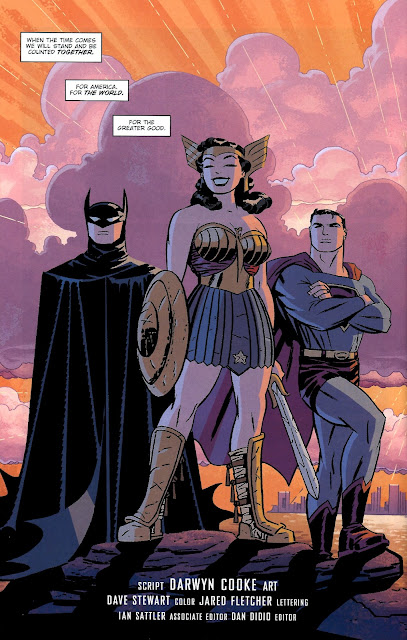 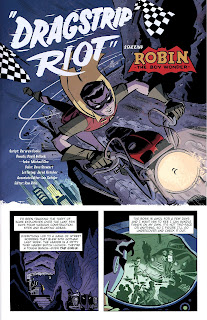 The second story, "Dragstrip Riot", is more light hearted, starring Robin the Boy Wonder and costarring Kid Flash. By now you've likely gathered that I'm a huge Robin fan, and while the story is short, I enjoyed the pencilling by David Bullock that is definitely styled after author Darwyn Cooke's own art. On the trail of an explosives thief, Robin finds himself doing undercover reconnaissance amidst a tough group of street rodders, finding that Wally West, aka Kid Flash, has been snooping their trail the same way all along! In rewarding the youths for valor, JF Kennedy dubs them the Teen Titans in the end, adding to the Silver Age flavor that exemplifies author Darwyn Cooke's work. 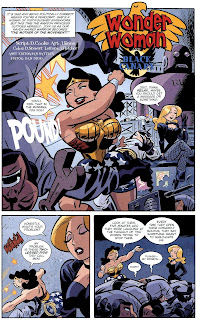 The final story is even shorter, detailing Wonder Woman's displeasure with the way women are being objectified, and her subsequent crashing of a Playboy Club grand opening (in Gotham City, surprising an unsuspecting Bruce Wayne who excuses himself awkwardly nonetheless!), with gal pal Black Canary in tow. The humor is most prevalent in this last one, both in tone and illustration. Diana's exclamations, "Hera's girdle!" and "Mercury's codpiece!" set the tone, and by the end of their ideological battle against the angered mob at the club, Black Canary is suggesting Diana put her breastplate back on, the beaten men heaped on the floor smiling upward. If you enjoy humor with your icons of the DC Universe, you'll enjoy this  :D
More Later- Make It FUN!
Posted by Super-Duper ToyBox at 10:32 PM