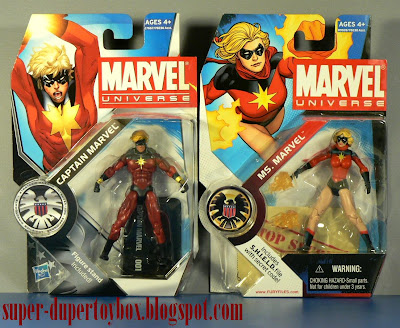 To my surprise, I found these two on the pegs at local retail- he's a Wave 12/2010  and the Ms. is Wave 3/2009. But then it seems many of us saw a restocking of these earlier waves this summer- a good thing for myself, discovering these Marvel Universe late in the game. What a fun pair! 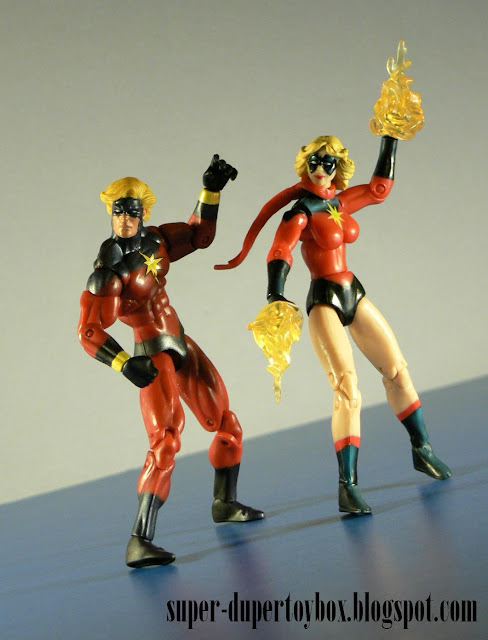 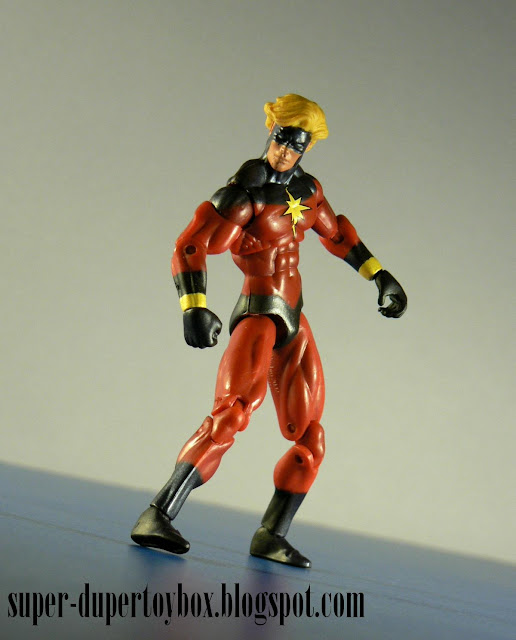 Revamped by writer Roy Thomas after his '67 introduction by Stan Lee & Gene Colan, the former Kree Imperial Militia officer sent to observe Earth's developing technology. Mar-Vell defies his superiors' orders and allies himself with Earth, the Kree Empire branding him a traitor. For this crime Mar-Vell is exiled to the Negative Zone by the Supreme Intelligence, only able to Mar-Vell  escape temporarily by exchanging atoms with teenager Rick Jones by clashing special wristbands called Nega-Bands, his superpowers and "cosmic awareness" a result. 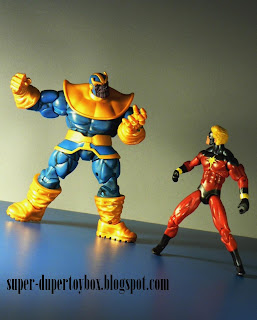 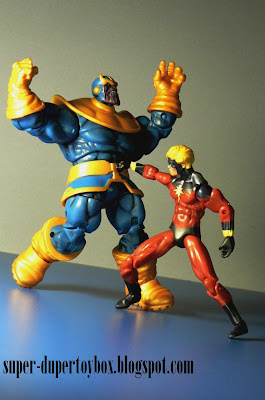 In The Death of Captain Marvel, Mad Titan & defeated arch nemesis Thanos comes into the subconscience of Captain Marvel while on his deathbed, unsatisfied with the Kree warrior wasting away from cancer, and demands the once proud champion of Earth rise & fight him to his glorious death. The two enemies walk off to oblivion, hand in hand with Mistress Death after Mar-Vell kisses her on the mouth at the end. A great moment for sure! 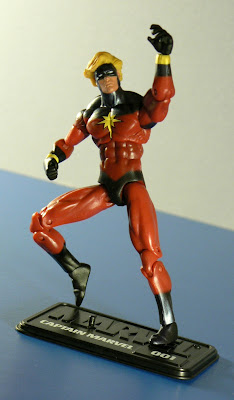 The head sculpt on this Marvel Universe Captain Marvel is a great! Mine has some slight paint slop around the chin that is barely detectable in passing. I'm not crazy about the Nega-Bands being painted onto the wrists- ridges, a little sculpting there would've made it more dramatic. his articulation is pretty standard, though he does have bicep swivels and a ball jointed head that makes him more expressive. His coloring is good- dark red with a slight black wash for depth, and the dark navy is metallic like the gold in his chest emblem & Nega-Bands. He came with a figure base unlike the much earlier released Ms. Marvel. She also has dark metallic blue paint, but with highlights of lighter blue, and her chest emblem is light yellow, like her hair, instead of gold- this didn't cover the dark blue completely underneath. Her albino drumsticks are ...extremely caucasian. The girl is pale, what can I say?  :D 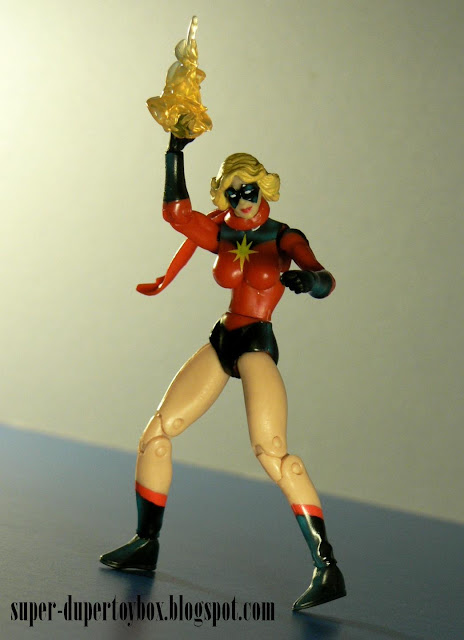 I've read very little with Ms. Marvel/Carol Danvers, my most recent encounter with her in Captain Marvel: Secret Invasion.  There are two other Ms. Marvels in this line: the modern variant in the black outfit w/long blond hair (Warbird costume), and a Karla Sofen version that has the red & blue outfit w/long blond hair. I dig this first appearance version with the 70's hairdo. She was the first female produced in the 3 3/4" Marvel Universe line, and Hasbro got off to good start here. Her articulation is simple, but she's solid. I'd seen some with bowed legs, a result of Hasbro's posed positioning in the tight packaging of these, but mine didn't have that. 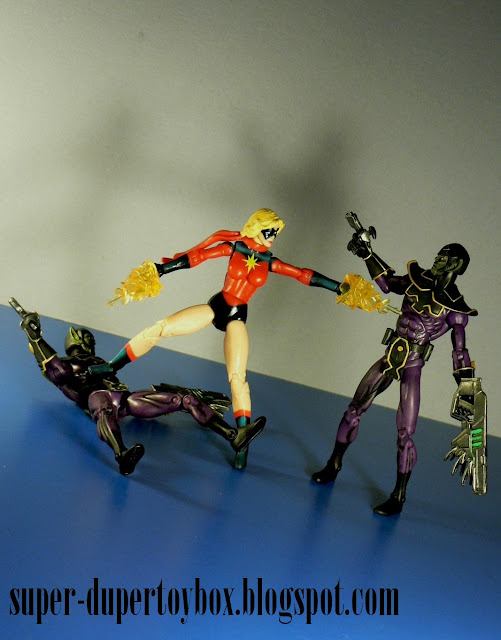 The scarf around Ms. Marvel's neck is a separate piece, and can be repositioned around her body, enhancing her poseability. She came with two translucent blast accessories for her hands that fit well. She has an upper abdominal crunch and a cut waist joint. She would have benefited from the newer thigh swivel & rocker ankle joints that came later in the line, but like I said, it was a good start. Like many of the first few waves, no figure base was included, though she stands well on her feet. 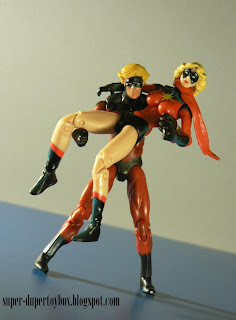 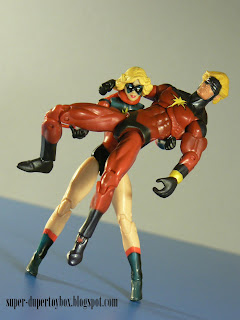 From Marvel.Com:
Following her affiliation with the C.I.A., Carol took a position with N.A.S.A. as the security director for Cape Canaveral. It was in this capacity that Carol first met Captain Marvel, the Kree warrior, Mar-Vell. In her official capacity, Carol was challenged with unraveling the mystery of this alien soldier. During her investigation, the two forged a unique bond, first as friends and then as lovers. It was this relationship that would change Carol forever. 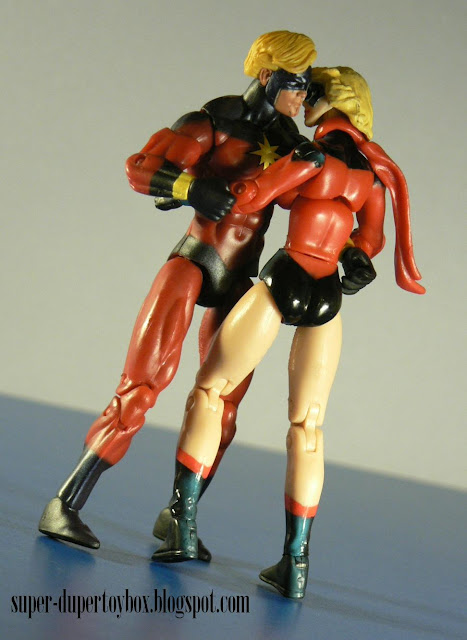 Captain Marvel's mortal enemy, Colonel Yon-Rogg kidnapped Carol, using her as bait in his conflict with Mar-vell. In the course of the battle, Carol and Mar-vell were caught in the explosion of a Kree Psyche Magneton device. The energy bombardment somehow caused Carol’s genetic structure to be melded with Mar-vell's. While Mar-vell was apparently unaltered by the event, Carol was now a perfect hybrid of Kree and human genes. In addition, she possessed all of Mar-vell's Kree knowledge and training. Through this transformation, Ms. Marvel was born. 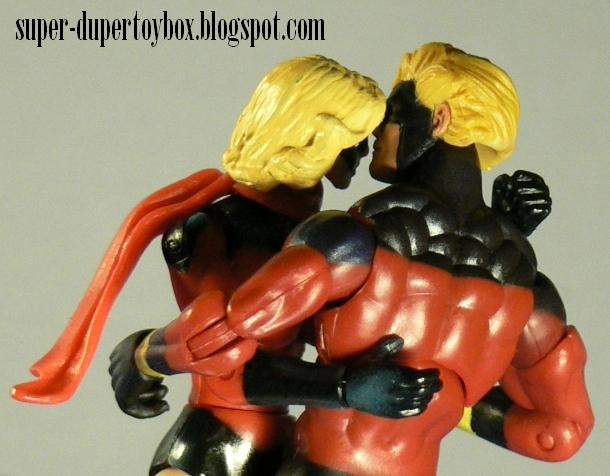 It should be noted however, that Capt. Marvel's final days were spent with Elysius, one of the Eternals of Titan whom he helped in purging Thanos' influence from ISAAC, the super computer that served their colony on Saturn's moon. 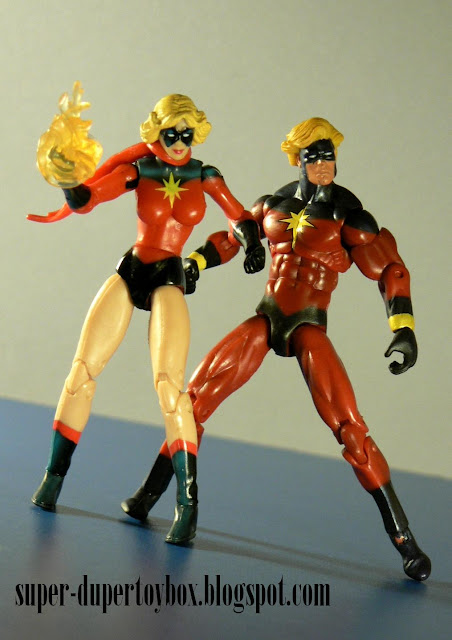 From Marvel.Com:
Grief stricken by her lover’s death, Elysius obtained Marvel's DNA code from ISAAC and it was used to impregnate her with a son. He would become known as Genis-Vell. Mentor felt that the son of Captain Marvel would be in danger from his fathers enemies. So he had ISAAC accelerate the child's growth into adolescence, and then implanted him with false memories of his childhood. This plan would enable Genis to defend himself from any would be attackers. Elysius raised Genis on the far flung planet of Paraxis. He believed Starfox to be his father. As he grew older he left Paraxis for fun and adventure. Elysius asked Silver Surfer to retrieve a pair of Nega-Bands, like those worn by his father Marvel, after which Genis began to follow in his fathers heroic footsteps. He took on various names such as Legacy, Captain Marvel and Photon. 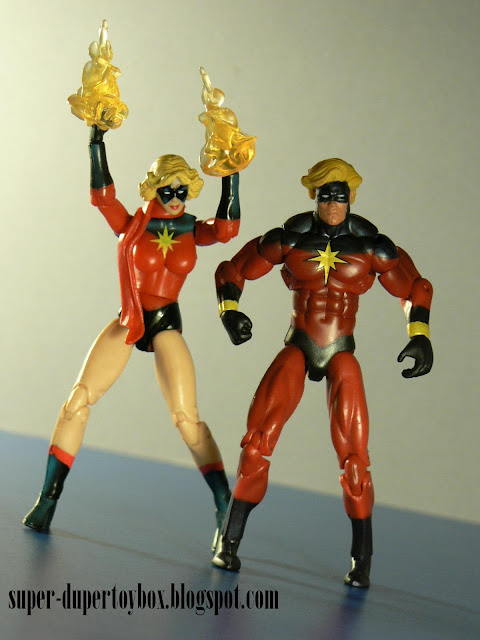 More Later- Make It FUN!
Posted by Super-Duper ToyBox at 9:23 AM