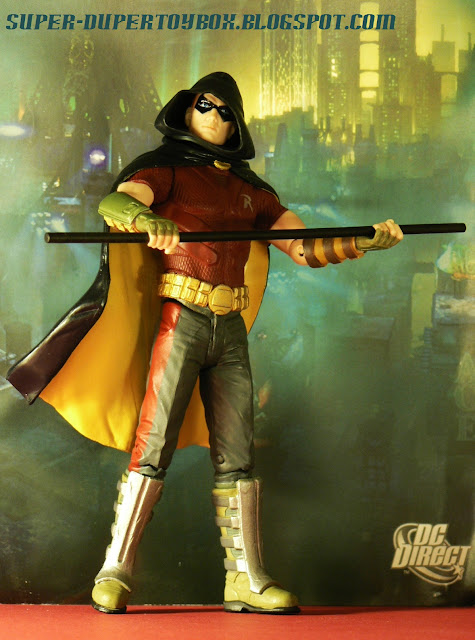 I'm not really into video games, but when I played a round of Arkham City with a couple pals recently, I was impressed. I played a few rounds in the Animated Robin skin as well, and liked that a lot!  When I saw both Mattel & DC Direct released a version of this Akham City Robin, I was pretty sure I'd go with the DC Direct- I had been pleased by their Arkham Asylum Batman, and when I saw Mattel's version included in a two-pack with Arkham City Joker, I couldn't justify the $30.00 price tag with NO ACCESSORIES. Further cementing my decision to go with the DC Direct was JTrain's YouTube review in which the Mattel Robin's had keeps popping off. 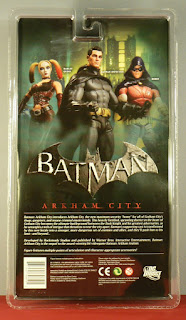 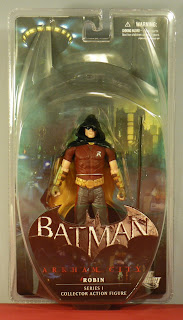 I picked this Robin up at Comic Heaquarters in South County- a great little comic shop & my newest haunt! He was marked $19.95, but they are having a 20% off year-end sale, so I only paid $15.96 for him- not bad! They had the "infected" Batman and Harley Quinn from this series as well, but I picked up a Justice League #4 instead, knowing I'd find other stuff I want more in the new year. 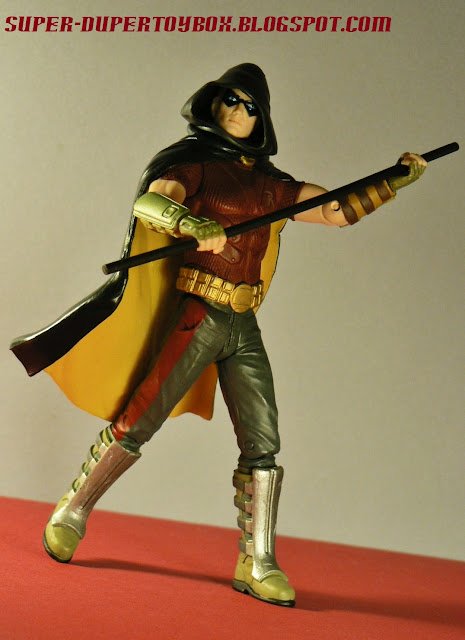 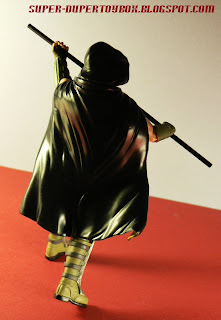 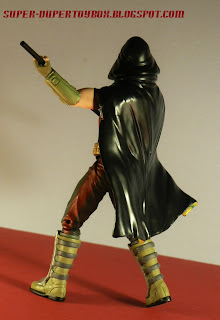 I love the outfit with the hooded cape on this version of Robin, which has a glossy black finish on the outside simulating a "raincoat" feel, and offering another texture to this nicely painted figure. The hood is a separate piece, enabling the head to move all the way around. The colors on Mattel's version are darker than this DC Direct, but I prefer my Robin able to hold a staff (Mattel's had one closed fist), & there appears to be no slop on mine.  The Boy Wonder is one of my all-time favorite DC characters, and this reimagining of the teen crimefighter's outfit is a unique & welcome addition to my collection! Check out this cool post I found on Robin Through the Ages at Off My Bird Chest! 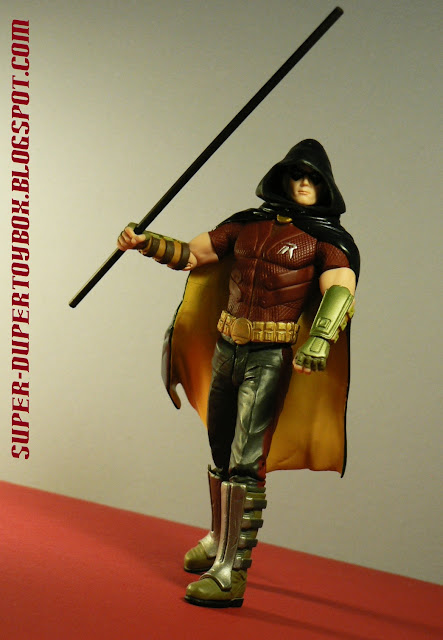 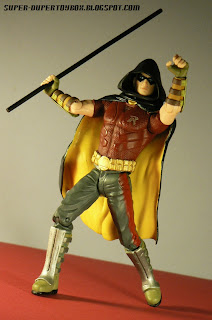 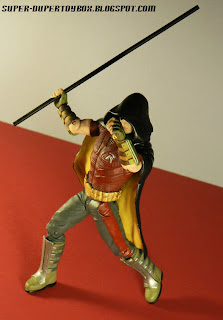 A lot of folks complain about lack of articulation in DC Direct figures, and while it's true that they pale in comparison to Mattel's in the said area, they are often more beautifully sculpted & painted. Some ankle & waist joints would have been nice on this figure, but he did have cut joints at the top of his boots and at his biceps, which helped. I played around with this toy for over two hours last night, taking over 200 photographs, and had a ball! And hey- I was able to get this DCD Robin to do quite a bit   :D 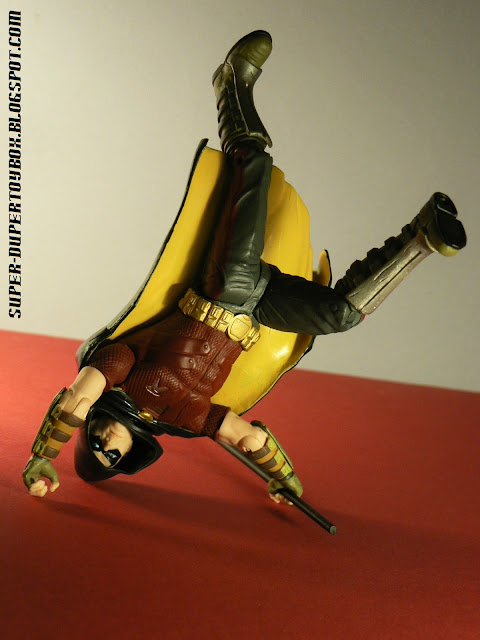 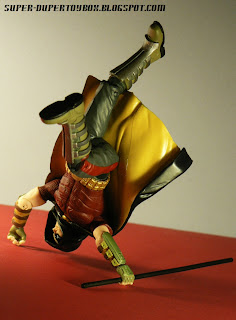 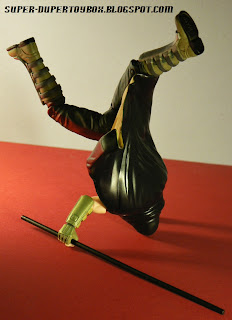 In JTrain's video review of this DC Direct Arkham City Robin, he had a hard time getting the figure to hold his bō staff with both hands, but with some patience I was able to gently "corkscrew" the accessory into the hold in his right fist, and then position the other end into his left open palm. Once I learned how to do it, I found it much easier and could position him with the staff in both hands in a variety of poses. The figure's swivel biceps give him some flexibility in this department as well. 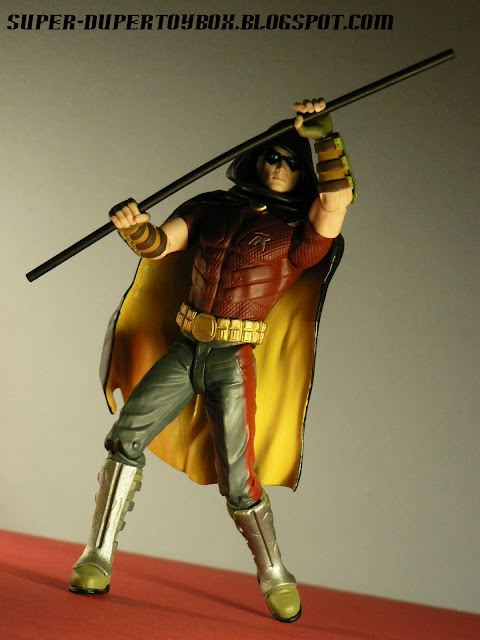 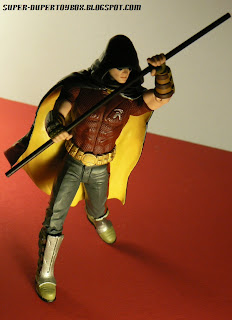 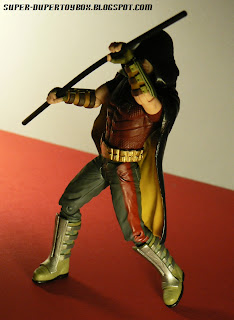 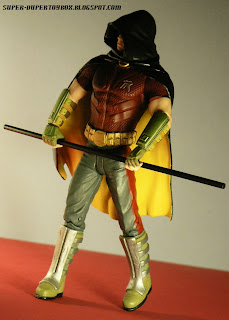 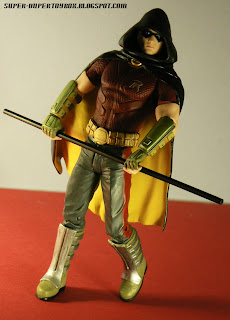 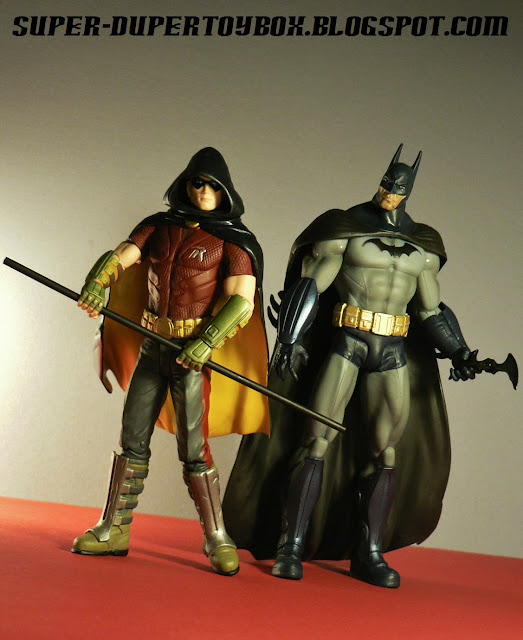 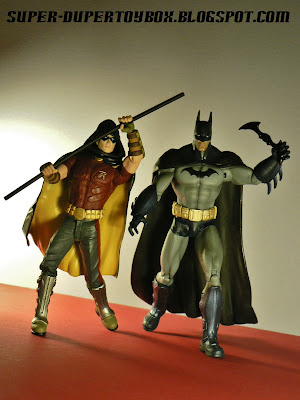 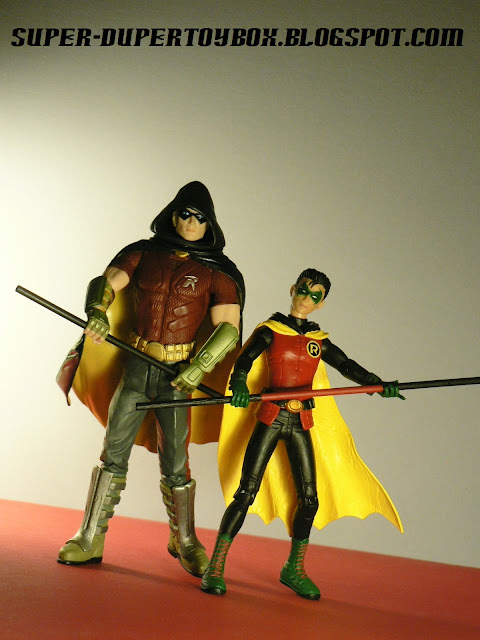 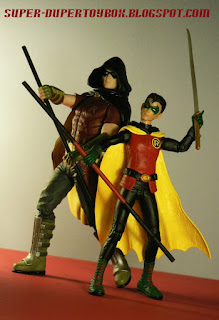 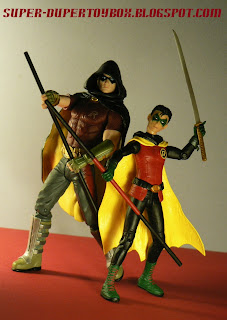 Arkham City Robin with some of my other DC Direct figures- New Krypton Superman and Superwoman, Justice Sinestro, and Crisis On Infinte Earths Lex Luthor. 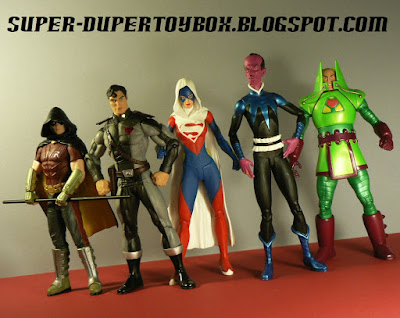 More Later-Make it FUN!
Posted by Super-Duper ToyBox at 5:28 PM