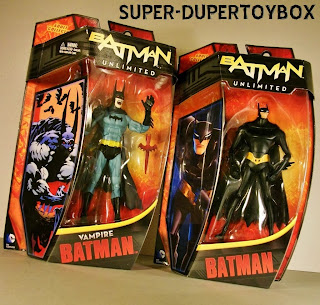 I picked these Mattel Batman Unlimited figures up a month ago, and since I've been on a Dark Knight kick recently, I thought I'd go ahead and photograph them. Many DC characters are a natural fit for a Halloween post, Deadman and the Spectre obvious candidates, but Batman shouldn't be left out of the conversation.  True, he's not a ghoul or ghost, but his shadowy dress and spooky essence make him a perfect subject around this time of year. First the Beware the Batman... 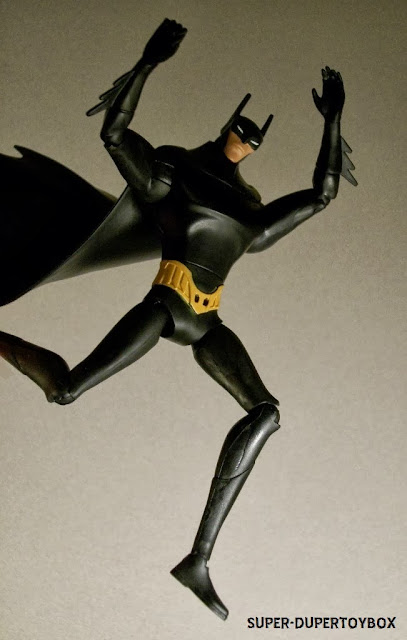 I love the exaggerated anatomy of this Batman and his new utility belt design- he looks just as he appears in the new Beware the Batman animated show... 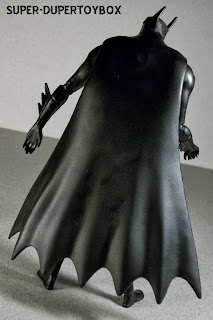 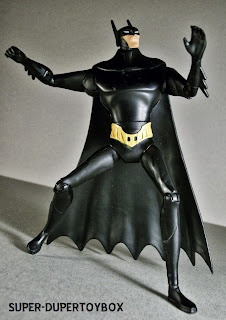 Beware Batman has a lanky, stick figure physique reminiscent of Tim Burton's Jack the Skeleton King, which is an interesting interpretation. I happen to have liked the only episode I've seen of this show, the main cast tweaked ever so slightly with Alfred as Bruce Wayne's bodyguard and Batman's behind the scene mission support, and Katana as Bruce Wayne's driver and Batman's sidekick. It's fresh and fun, and the change-up among the Rogue's Gallery is appealing to me. 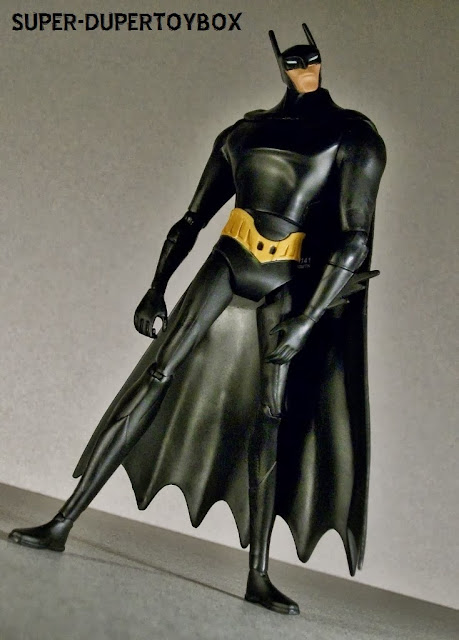 I love a re-imaging of a popular character, and while this isn't anything new, it's presented in a new way. I admit this is reminicent of the '89 Batman, also Tim Burton's movie, and contributes to my nostalgia as such. The paint & finish are unevenly applied, splotchy and marred on mine- unfortunate as there's much potential here. The success of it's simple deco is dependent on clean production. Quality control was out to lunch that day. 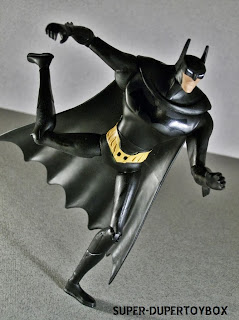 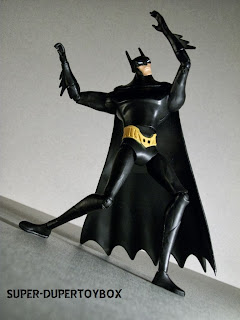 Beware the Batman has some difficulty standing due to his small feet, heavy cape, and somewhat limited joint range in areas. The elbows, knees and ankles have swivels at the hinges, a swivel at the abdomen and wrists, and Batman's head is on a hinge-swivel with good vertical range. The hips have great lateral range, decent dorsal, and limited forward range. The ankles on mine struggle against the weight of the cape and the figures's overall top heavy buck. That said, I really like the design visually, in spite of it's flaws and Mattel's refusal to give us an accessory or stand. 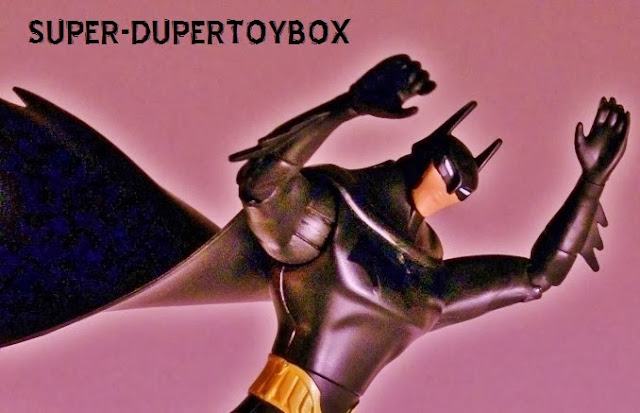 Beware Batman is like the All-Star Batman, my first and favorite DCUC Batman, in his all-black outfit. The slender limbs and long ears remind me of the DC Direct First Appearance Batman from my last post... 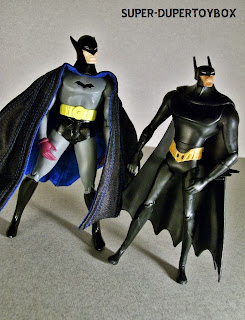 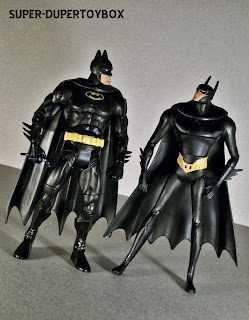 ********************
Batman's clandestine nature lends itself well to the Dracula treatment in his darkly cloaked outfit, so this Vampire Batman seems completely natural to me. The open, fanged mouth is really great, as is the overall sculpt and paint. There are great highlights and shadows throughout the head, cape and body! The more sinewy DCUC buck is used, accentuating his undead state. And we get double-hinged elbows and hinged wrists like the Sinestro Corps Scarecrow. 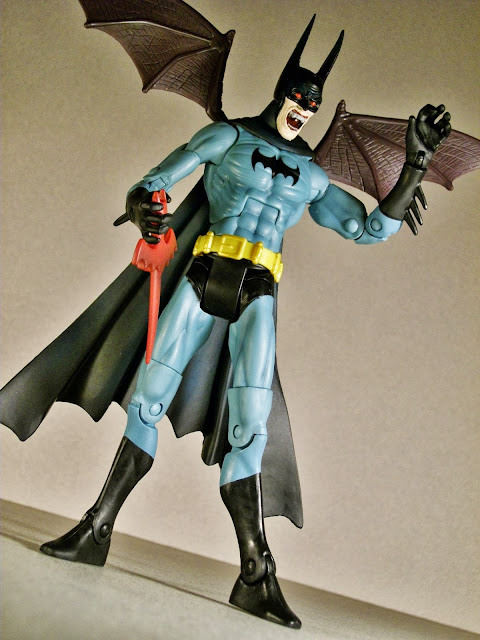 The cape has a unique sculpt made even better by the paint highlights, under which the detachable wings fit into peg holes on the figure's trapezius. This works relatively well, and allows for some positioning of the detailed, purple wings. Really fun! 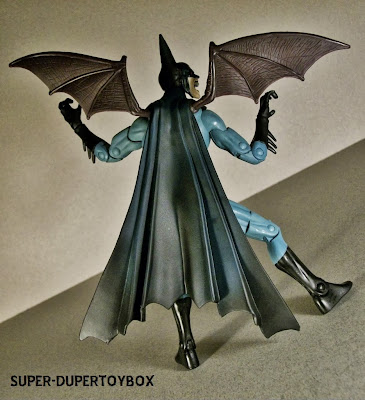 Vampire Batman also has gold highlights is his belt buckle and storage compartments, which like the red eyes, is a small detail that adds dimension along with all the rest of this figure's generous Paint apps- he looks killer! 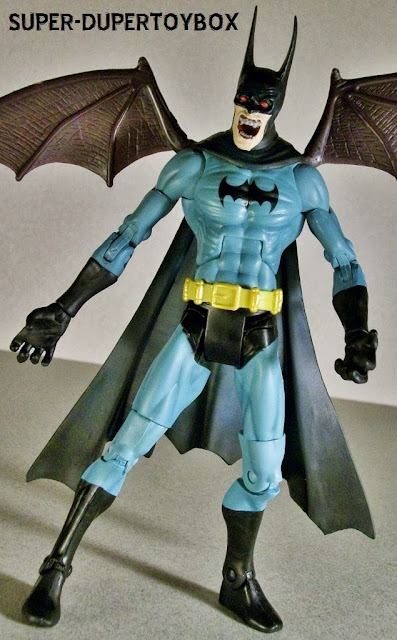 Vampire Batman reminds me of Azrael Batman in that he is winged, and like the Beware Batman, was unique enough to warrant my purchase. We are given a stake with handle and hilt sculpted in the shape of a Bat, an accessory I appreciate- it's cast in red plastic with great shadow paint apps. Nice. 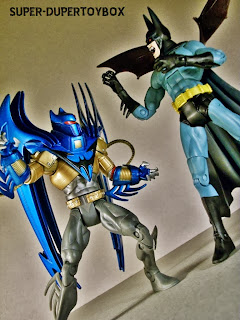 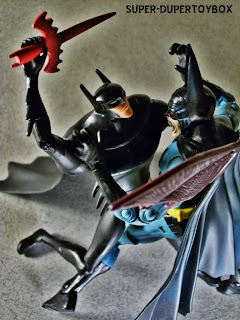 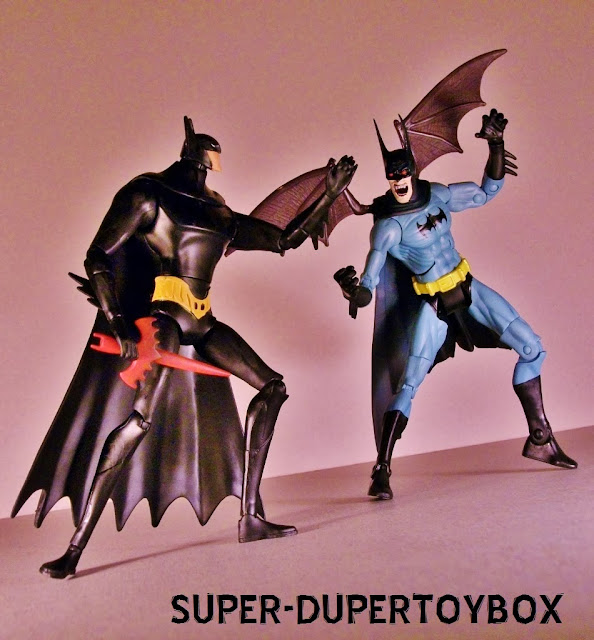 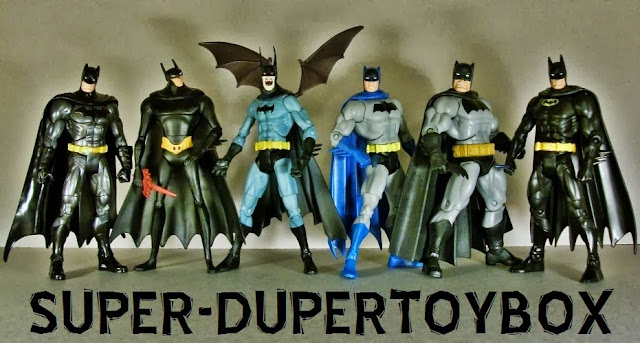 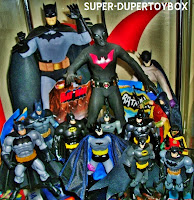 A few of these occupy the quickly crowding Batman shelf in my glass cabinet, which isn't even a third of the Batmen in my collection. And yes, I'm looking forward to more when DC Collectibles drops the Capullo and Earth 2 Batman figures next year. For whatever reason, I've passed on the new '66 Batman & Robin, Batmobile, and companion figures- they just didn't grab my interest. I would like the Funko POP! '66 Batman & Robin vinyl figures coming out though, and I just saw a Sofubi Batman & Joker 9 3/4"  vinyl figure set by Medicom that is sweet vintage goodness- I'd love to have those!

Posted by Super-Duper ToyBox at 7:06 AM