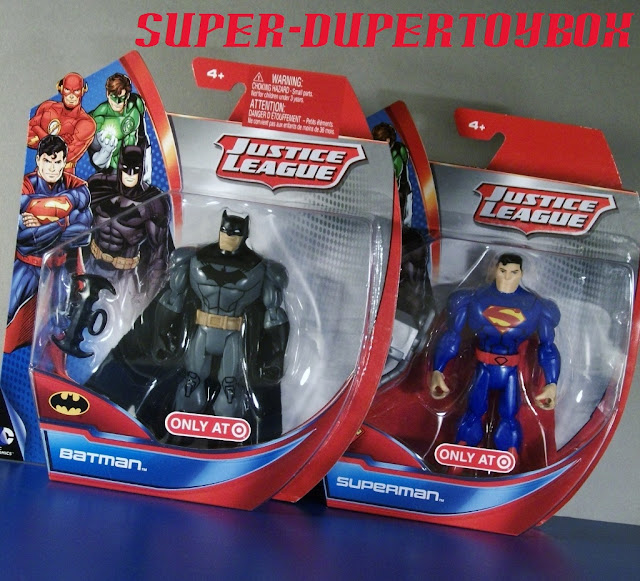 In continuation of my last post on the new 5" Justice League figures, I present the New 52 Superman & Batman. I hadn't originally intended to pick up yet another Batman in the Brave & The Bold style, but liked his classic color scheme so much that I went ahead and grabbed him while getting the other three characters. I was certain, however, that I'd be picking up this fun little New 52 Superman... 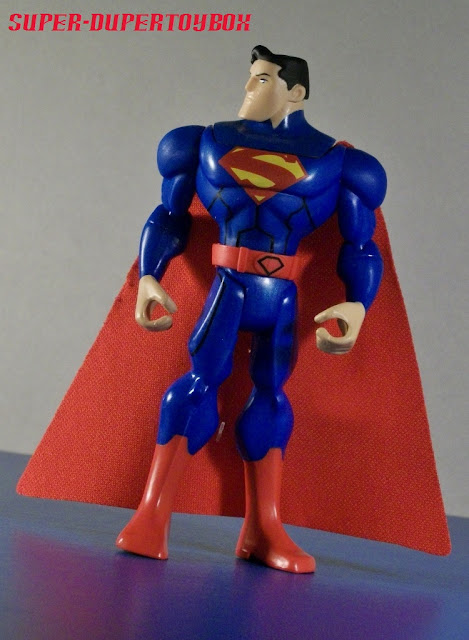 Again, these don't have any articulation beyond what we saw in the Brave & The Bold figures- swivel head, waist, arms and legs, the latter restricted by the posterior sculpt, and hinged elbows. They don't need it because little kids don't pose their action figures- they play with them. The colors are bright and cheerful on this Man of Steel, styled after Jim Lee's New 52 Superman- a design I like. While I somewhat miss the hexagonal accessory slots prominent in the original B&TB line, caped figures benefit from their omission- no hole punched in the cape. Superman can now have the family shield emblazoned across the back of his cape! 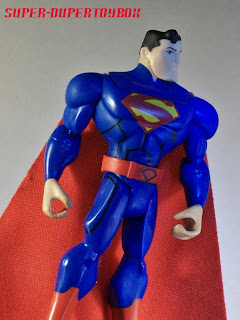 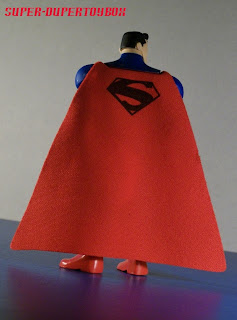 This is a great looking Superman- the New 52 S shield is tamped neatly on his chest, which has armor lines running throughout like Jim Lee's redesign of the iconic suit. Mattel also squared off the boot tops, pointed his cuffs, and stamped a shield on top the belt buckle to update the character. And like the Green Lantern from this line, Superman has a collared neck, only visible when his head is turned. Mine has a slight chip in the chin, but it's not too visible in person. While this is a only a redeco of the previous B&TB Supermen, he may be my favorite. 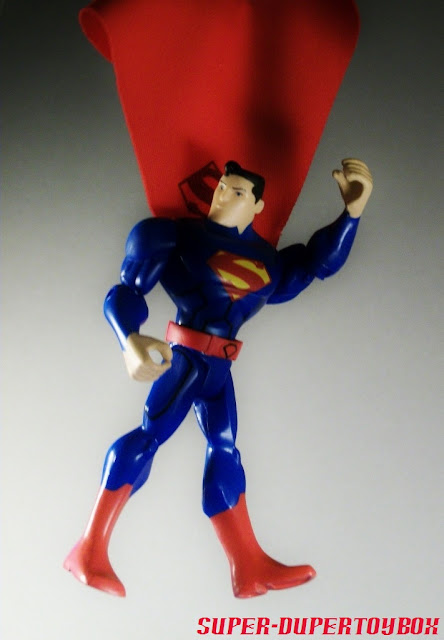 BubbaShelby confirmed that the Flash from this series came with a re-purposed Justice League Unlimited accessory that Red Tornado also had, as did the Green Lantern share the same construct as the JLU Parasite. I'm certain this strange device came from a JLU Superman, but I can't seem to find confirmation of this on the internet. I've said in the last post that while I can appreciate the cleaner appearance without the heaxagonal Snap & Attack accessory feature that defined the Brave & The Bold Line, I feel some of the play value has been removed, so why bother giving me this chunk of gray plastic that has no mutual context with this New 52 Superman. It's only a reminder of Mattel's recent refusal to give us much in the way of accessories. I should mail it to them. But I digress- I love this little Superman as much as my other two. 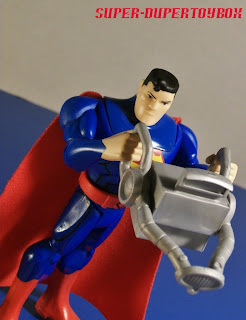 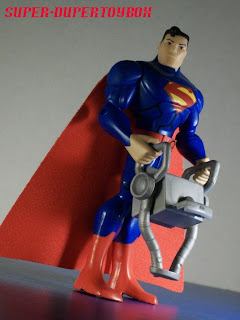 Justice League Superman with Brave & The Bold Total Armor series Steel Power Superman and Kryptonite Collision Superman. I love having a few variants of any character, within a single series or across multiple toy lines and manufacturers... 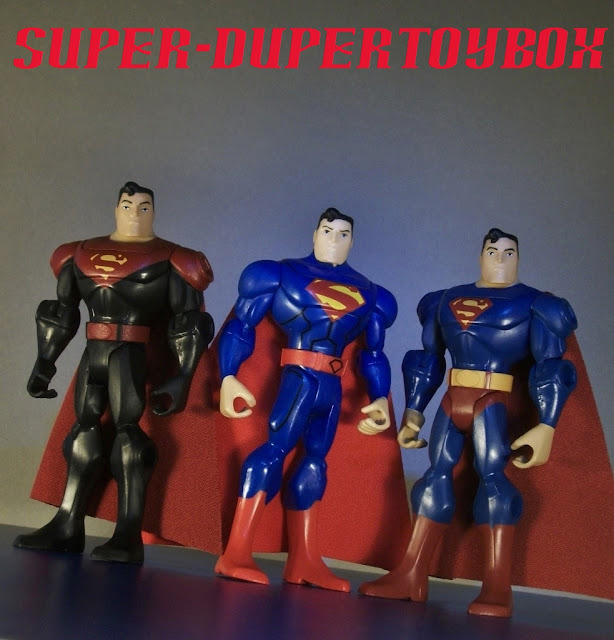 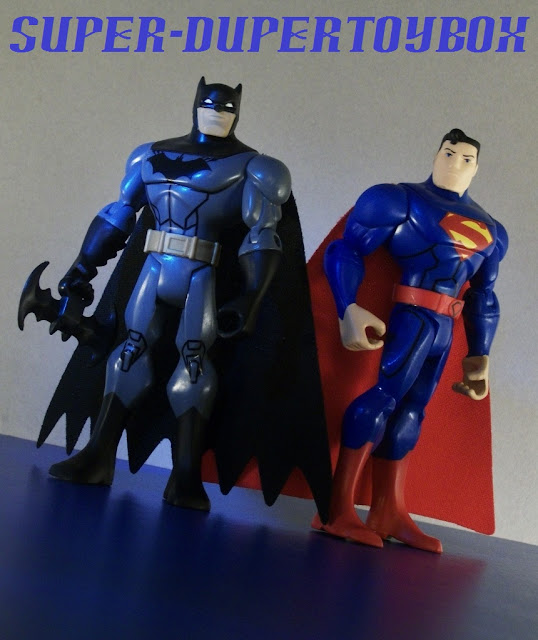 Batman is the same figure as all the basic variants in the Brave & The Bold line, of which I have many, but he's so cool I had to have another. I didn't have a black & grey B&TB figure, nor a New 52 styled Batman, so I picked him up with Superman & the others. He has the best accessory of these new Justice League figures, a simple batarang with a handle to slip over his hand. I love the B&TB styling of this Batman- I loved the show, and the toy line is perhaps my favorite. The guest characters and their subsequent action figures like Blue Beetle, the Atom, Green Arrow and Plastic Man were really great, and Aquaman was hilarious! 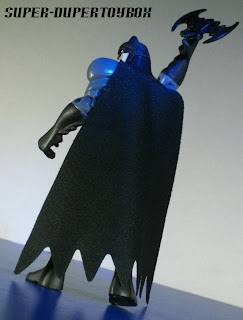 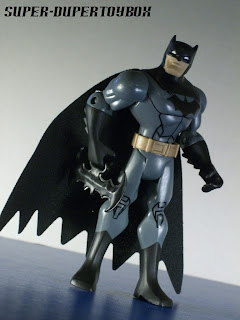 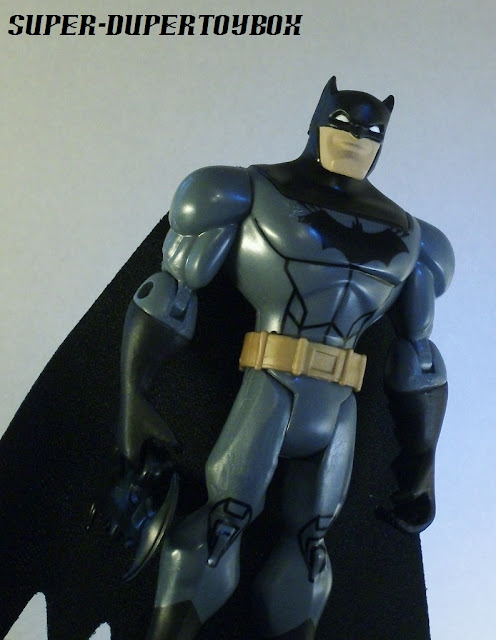 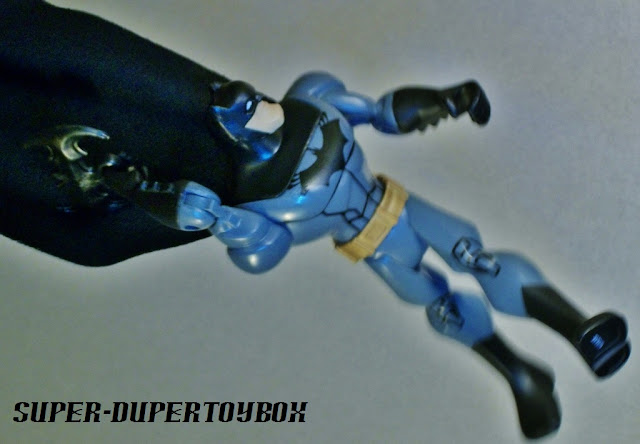 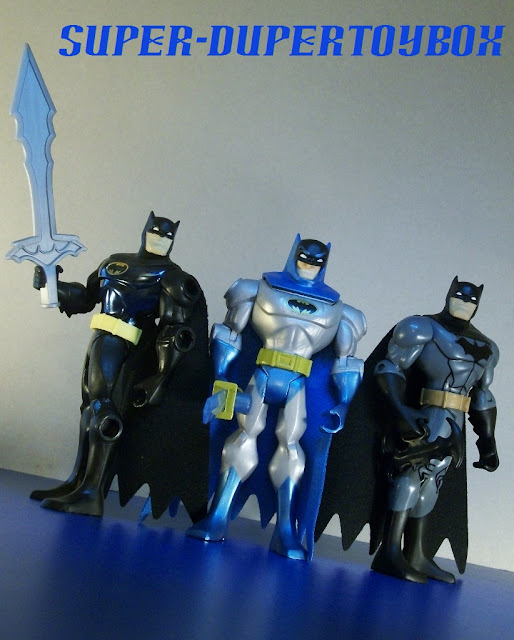 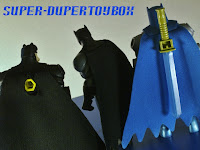 This new Batman has no hole in the back of his cape like the previous line, the hexagonal accessory plugs removed from his body, which I found handy for plugging in Gear Up Batman's saber. As I've said before, once I got past their aesthetic as a kid's toy, I didn't really mind the socket holes in the B&TB figures- they were what the were, made for play.  Still, it's kinda nice to have a n example without to appreciate. I have some really fun B&TB Batmen I should open and post on, and in fact just found two more I liked!   :D


I have fourteen Batmen from the Brave & The Bold line, and will soon be adding two more, but am always on the lookout for more! Take a look at the last photo on my post from Nov.11th, 2011 to see a few from my collection. 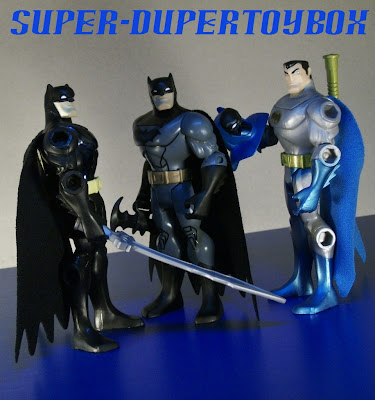 And finally, Green Lantern and Flash with Superman and Batman, all the latest single carded 5" Justice League members available at Target. The card backer does show a Lex Luthor I'd be interested in, but he was nowhere in sight. Since getting these last weekend, I've seen the boxed set which also includes Cyborg, Wonder Woman, and Aquaman, but I have a Brave & the Bold Aquaman I love already, Batman didn't come with a Batarang, and it was a little more than I wanted to spend on these right now. These were the four are the one's I cared most about and are a lot of fun! 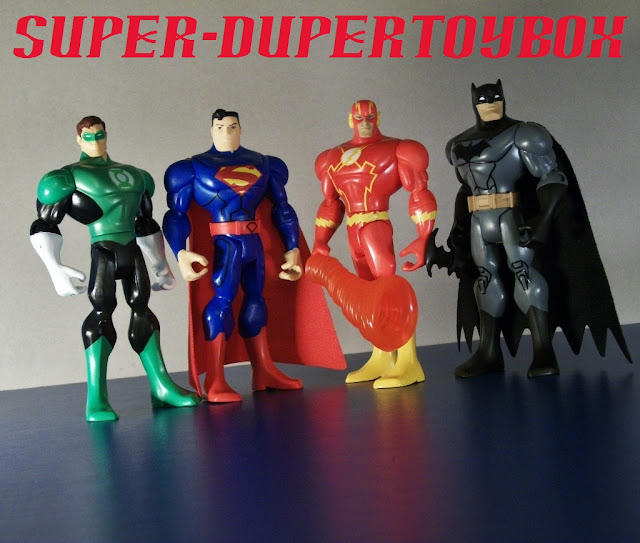