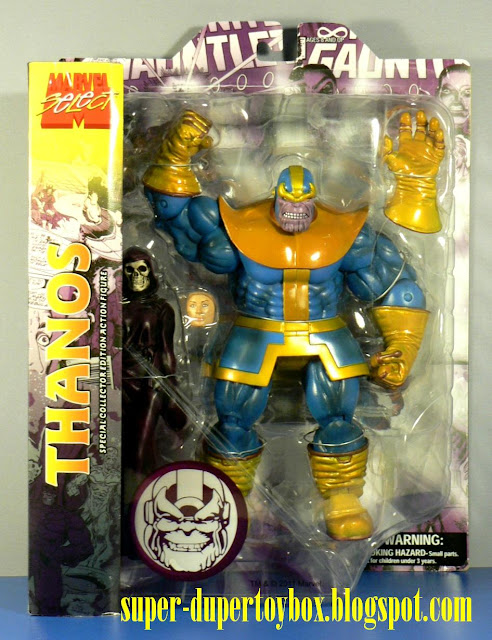 I finally got around to opening this Marvel Select Thanos, and what a killer action figure he is! Behold: 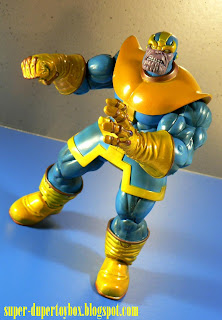 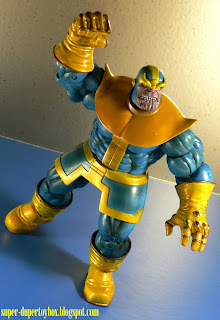 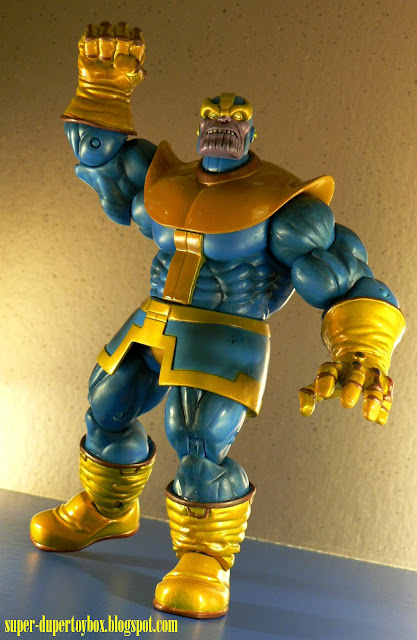 Known more for their sculpt and paint, I was somewhat surprised by the range of articulation put in this Diamond Select figure- the bicep joint was unexpected. And the head is on a ball/hinge that is very expressive- tantamount to a character like Thanos as far as I'm concerned. The range in his elbow and knees are somewhat limited by the bulk of his limbs, but he's very poseable. He has a cut waist joint and his pelvic/thigh ball joints enjoy as wide a range as the ones in his shoulders. The paint on mine is pretty great too- not perfect, just really good. Particularly well painted are the individual soul gems on his Infinity Gauntlet, which you can switch out with his left fist- careful, it's a tight fit! The iridescent gold paint used provides some great depth in the sculpt, most noticeable in the gloves & boots. And thankfully gone from this re-release of the 2005 figure are the somewhat extreme orange airbrushing around the eyes. This is the Thanos I've been looking for! 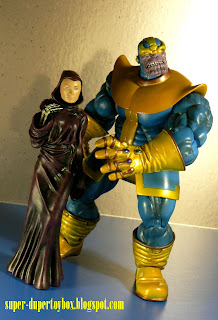 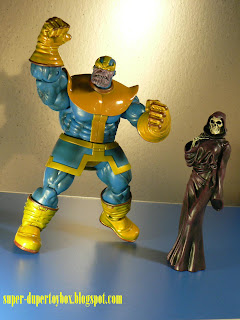 Thanos came with his mistress Death as opposed to a base/diorama which is appropriate, her female visage removable to expose the skull beneath. This works pretty well, the face/mask fitting securely atop the skull with no danger of falling off. She has no articulation other than that, but she's crucial to Thanos' whole narrative: the Mad Titan slayed half the sentient life in the universe to win her love in The Infinity Gauntlet. How romantic  :D  Actually, I needed her to re-enact the scene from The Life & Death of Captain Marvel where Thanos, unsatisfied with his enemy withering away in his deathbed instead of dying in glorious battle, appears from beyond the grave & challenges Mar-Vell to a final fight to the death. At the end of their contest, Thanos has led Mar-Vell to meet Death, telling him not to fear. "It's not that I fear her, it's just that... I no longer need the illusion", our hero replies, passing his hand over her beautiful face, revealing the bare skull beneath... to literally accept the kiss of death! 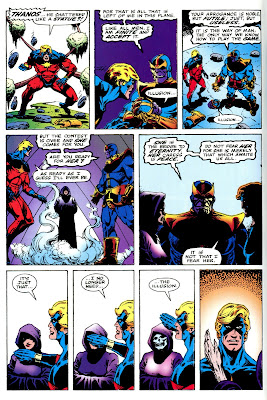 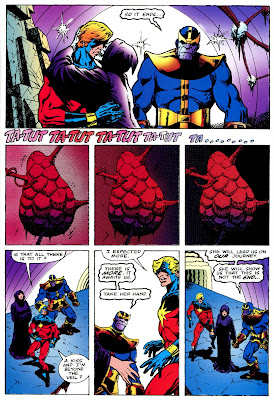 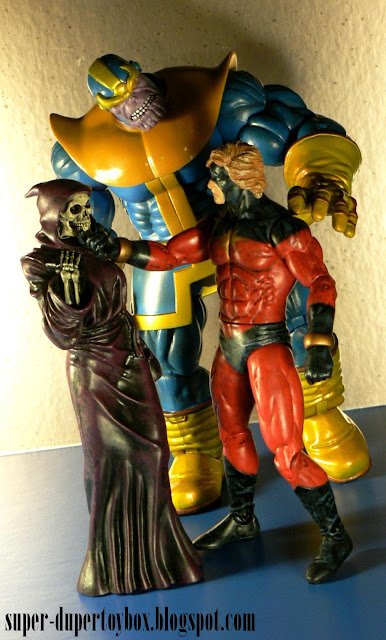 While Thanos is a thick and heavy eight inches tall figure, his heft doesn't quite match that of my Marvel Select Hulk. I just love a BIG action figure don't you? Yes, I'm crazy over those 3 3/4" Marvel Universe figures, but I'm a man who likes something he can grab onto! 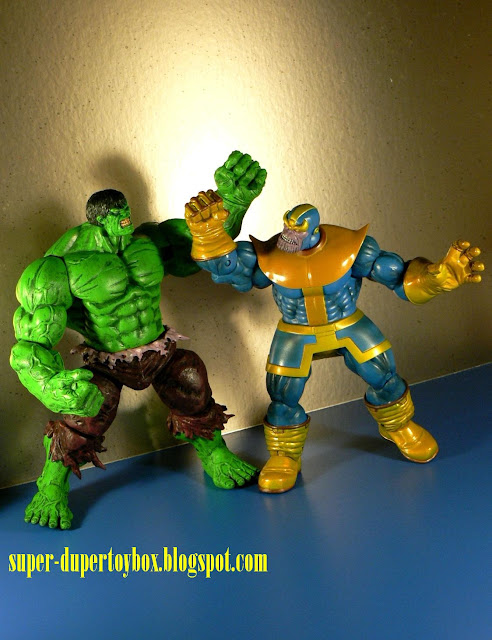 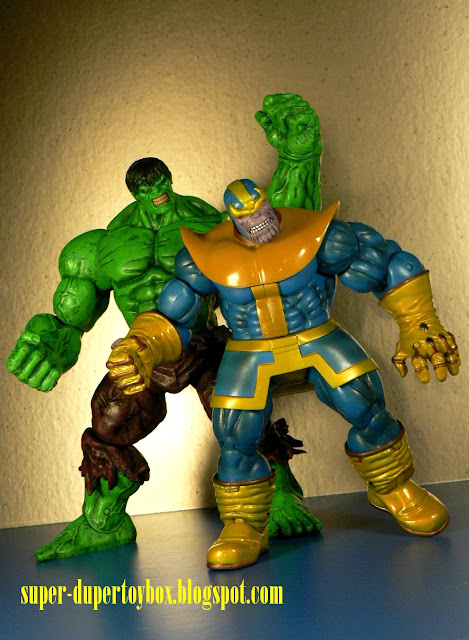 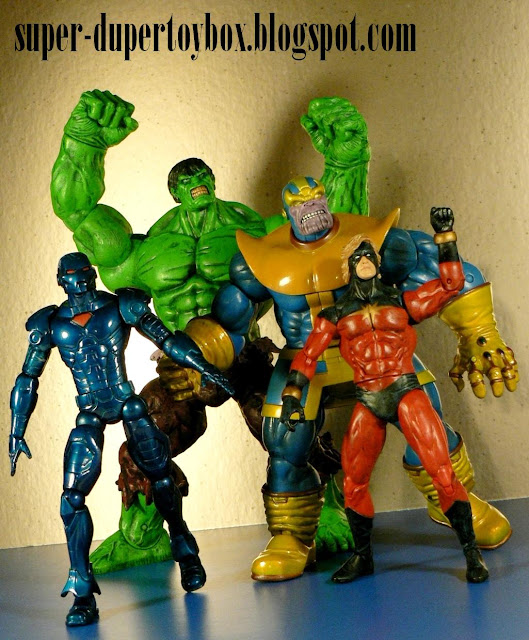 Let's face it: this post won't be complete without a round of BIG TOY/little toy alongside my Marvel Universe Thanos!  Don't try tellin' me this ain't fun, I know you like it   :D 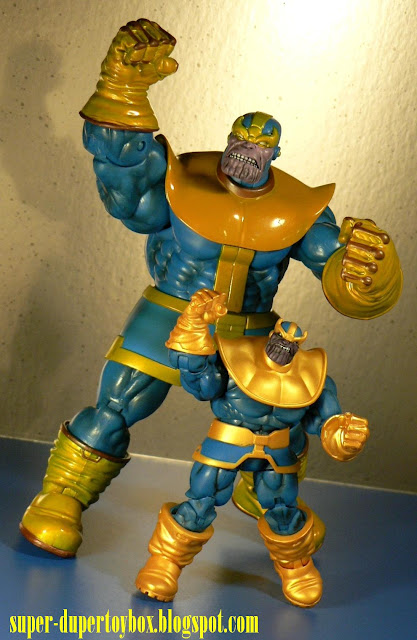 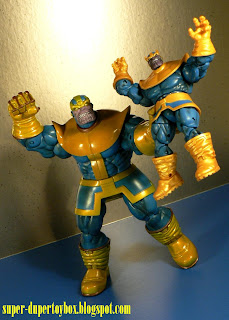 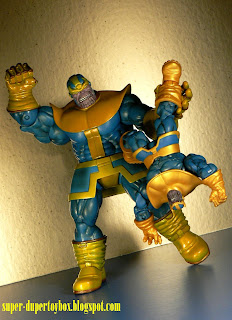 ...What the heck- let's make it fun and do a BIG/little Captain Marvel & Thanos together  :D 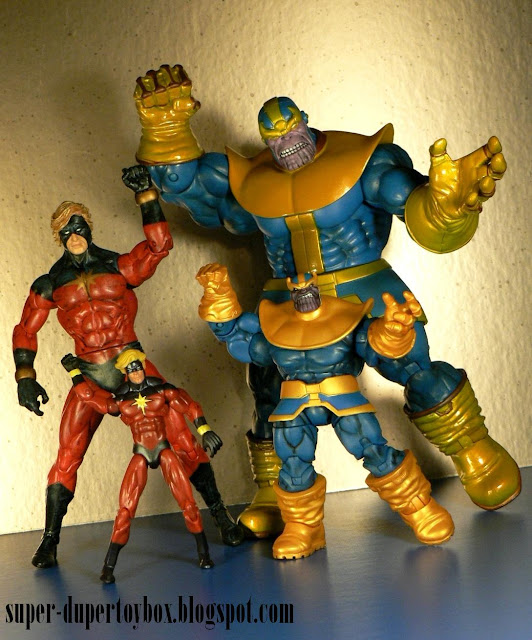 *Marvel Select Database at MarvelousNews.Com!
More Later- Make It Fun!
Posted by Super-Duper ToyBox at 1:30 AM