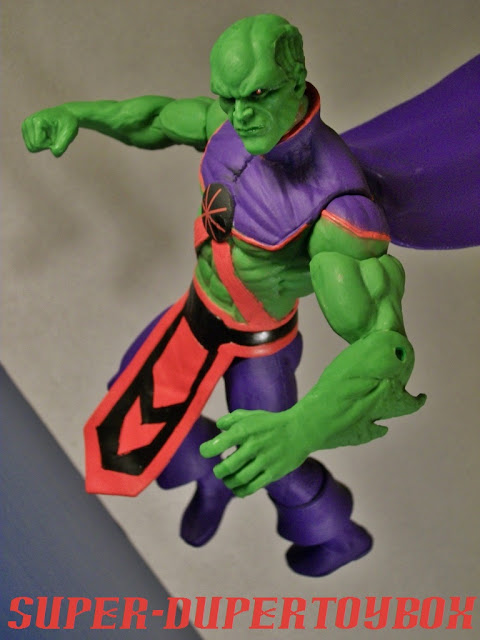 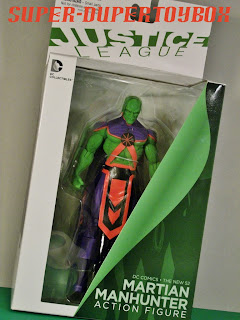 I've been impressed with DC Collectibles Justice League series- their action figures haven't improved insofar as their articulation, but the sculpts and colors continue to dazzle the eye. For a character that most of the general public doesn't know, Martian Manhunter has been immortalized in plastic a surprising number of times. I think this is like my eighteenth, but I don't have them all. I wasn't really familiar with J'onn in my youth, but when I returned to comics and started this blog I grew very interested in the underrated character. Described as the most powerful being on Earth by Superman himself, J'onn J'onnz has most all of the Man of Steel's powers, with the added telepathy, shape-shifting, and phasing intangibility to make the Martian nearly invincible. The thoughtful nature of this lone survivor of the Red Planet is what appeals to me- his compassion for the Earthlings who would instinctively fear him when not disguised as Detective John Jones.
For whatever reason, I haven't read a lot of the New 52 adventures of Martian Manhunter, and need to catch up on the Brightest Day books (2010) dealing with his resurrection after being murdered by Libra in Final Crisis (2008). I did however thoroughly enjoy several of those Ostrander/Mandrake issues from the late '90s, the American Secrets series (1992), the Martian Manhunter: The Others Among Us  TPB from volume 3 (2007), and loved his treatment in DC: The New Frontier (2005). 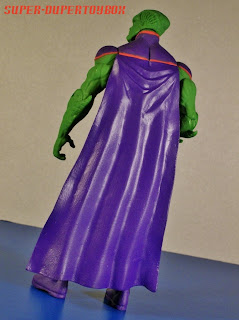 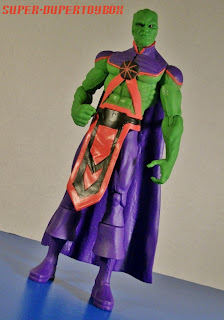 J'onn gets the regal treatment in his majestic purple, DC continuing to give the longtime bare-legged character pants, adding an almost ceremonial red loincloth and closely collared shoulder overlay.  There's some great texture in the pants and boots- pulls in the seams that give them a realistic feel. Conversely, the folds in the cape are somewhat loosely rendered, and could have used a sharper sculpt. I've seen worse capes on some of DC Direct's past figures however, so it's not a deal-breaker. 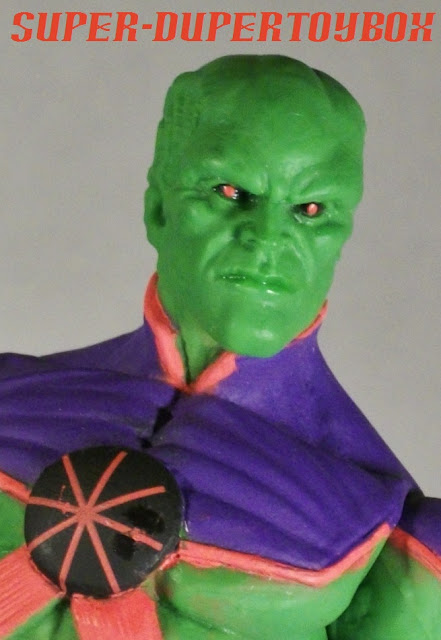 Up close there are some really loose paint apps on the figure, most noticeably in the piping on J'onn's shoulder overlay. To be fair, that's some really small detailing in the sculpt that would be difficult for the most skilled, and he looks great under normal viewing conditions. I like the layer of gloss over the lips, which greatly contributes to the realism of this excellent head sculpt. Wonderful! J'onn shows more alien features here, finned forearms and enlarged, ribbed cranium. DC Direct aren't known for their amazing articulation, but we do get swivels at the boot tops. Other than that, there's no waist/abdominal or wrist joints, but he does have an expressive ball-jointed neck and some backward range in his hips like the other Justice League series figures. His ball-jointed shoulder/bicep swivel combo is nice, but nothing new. My J'onn has satisfyingly firm joint tension and a sturdy feel. I paid $24.95 + tax for him at a local comic shop. 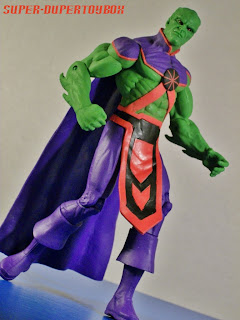 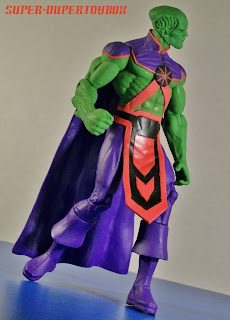 I still haven't opened the Justice League Green Arrow I picked up back in March- an impressive offering of accessories and great costume on this one! Like Mattel, DC Collectibles seems to have quit including a base/stand, though we have a peg hole in the heel. Annoying. Still, these are nice action figures that are more artfully rendered than most of Mattel's of similarly scaled 6" figures... 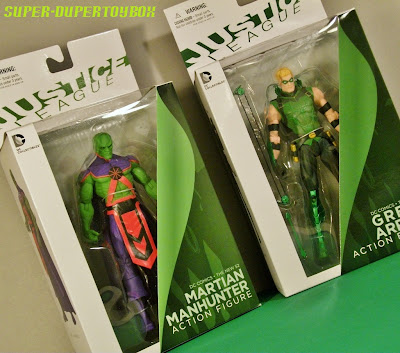 Also still MOC is my DC Direct Brightest Day Martian Manhunter- J'onn had this costume very briefly after his resurrection at the end of Blackest Night and through the following Brightest Day arc, before DC Comics' controversial and successful New 52 relaunch. While I'm generally a fan of variant renderings of a character, I was a little sorry to see J'onn's Brightest Day dress disappear so quickly. The black pants were cool... 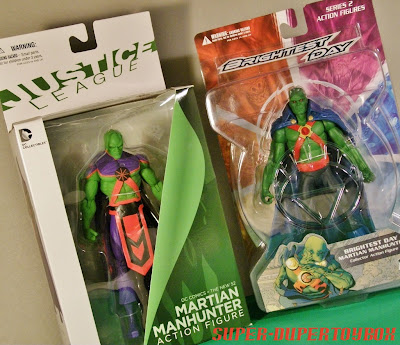 7" Justice League Martian Manhunter with DC Direct New Frontier and JLA Classified Manhunters. One thing I like about DC Direct figures is their wildly different styling from series to series, often emulating the style of a particular comic artist, in the latter two artists Darwyn Cooke and Ed Guinness. Two favorites! See more of my Martian Manhunter collection in my May 27th post! 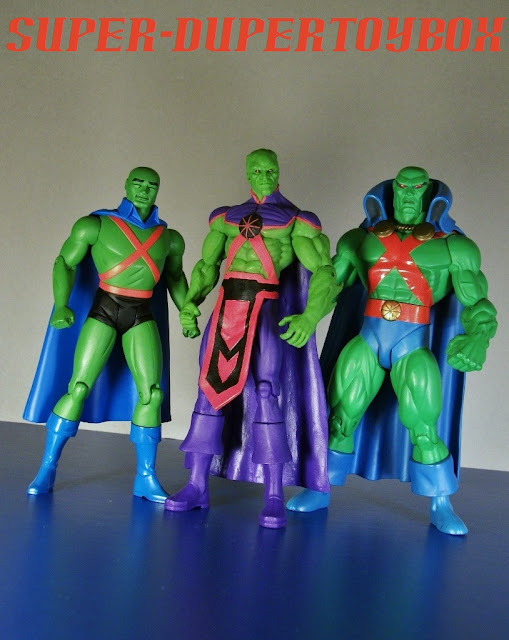 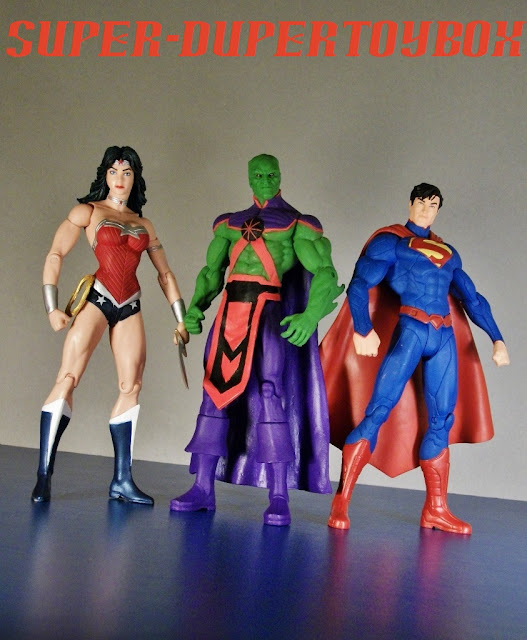 J'onn should help even the odds against the likes of  Darkseid with Diana and Kal... 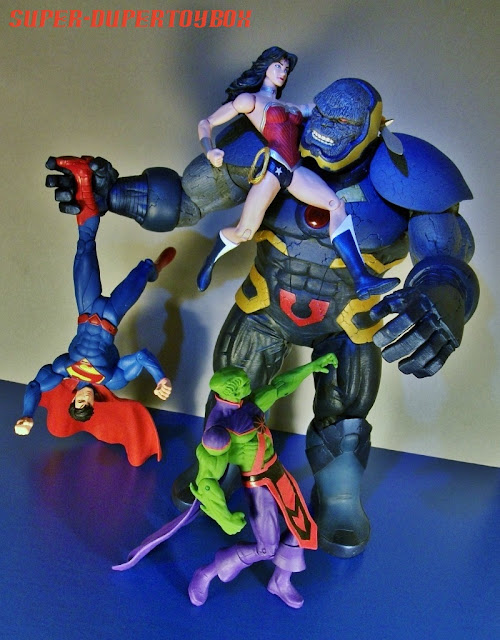