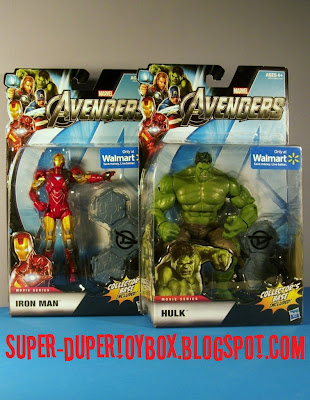 The final two Hasbro Wal-Mart Exclusive 6" Avengers figures we'll be looking at are Iron Man & the Hulk. Like Thor and Loki, I'd not planned to buy these, but was impressed with them enough firsthand, that I changed my mind. 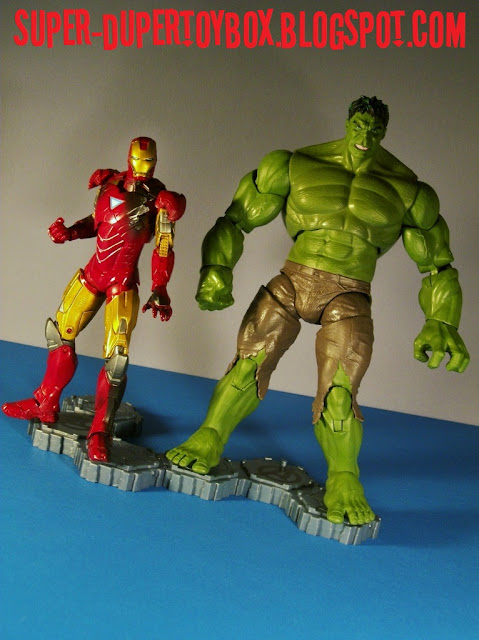 This is the same as the Iron Man Mark VI from the "Avengers Assemble"/Iron Man line, without the extra hands. Some Marvel Legends fans might feel ripped off by this, but I'm glad I didn't pick that one up because this one has a little battle damage. I've bought and sold off some Iron Man movie figures, but this one seemed special, and the articulation was more serviceable than the Marvel Select Mark VI I used to own. 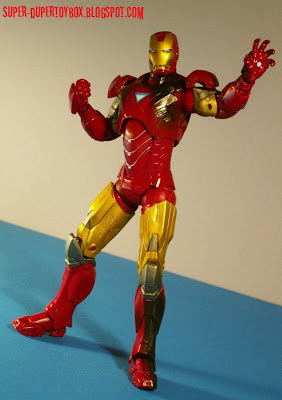 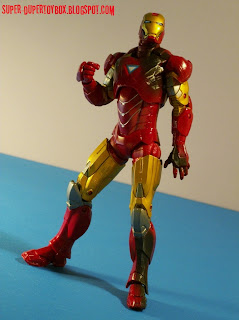 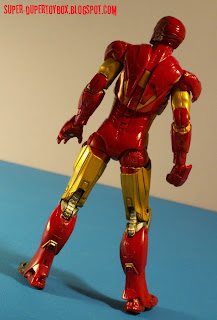 My personal opinion is that Hasbro should have gone further with the damage on Iron Man's armor, especially considering the damage it recieved in The Avengers. The did an otherwise great job with the paint apps, making it look like the metal was burnt but also scraped, accomplished with silver drybrushing over the blackened areas. It's as though Tony got blasted, then went skidding across the concrete- very realistic! A little more across the face, legs, and back would have been more convincing. 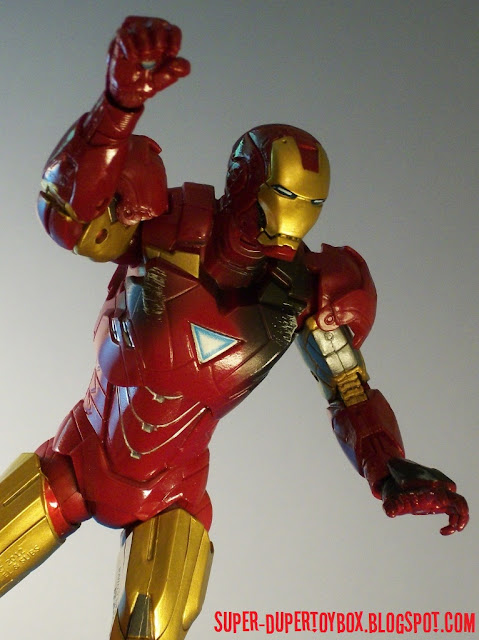 Like I said, this figure has already been released, twice in the last couple years I believe, so the articulation is nothing new. That said, Iron Man can do a lot; he has a a ball/hinge combo neck with a decent range of motion, & double-jointed knees & elbows, and hinged/swivel wrists, so what else could you want? And he looks great- yes, we've seen A LOT of Iron Man toys clogging up the pegs in the last many years, and that's probably why it's easy to forget how good an action figure this is. 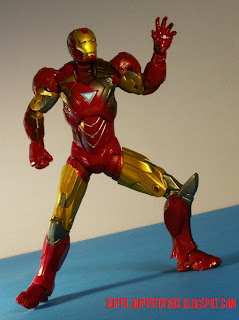 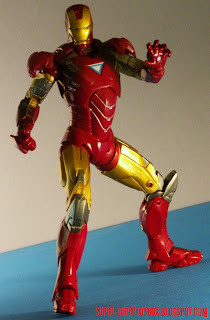 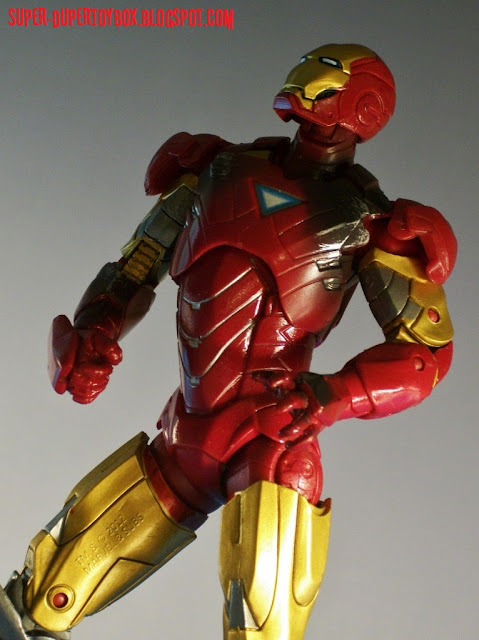 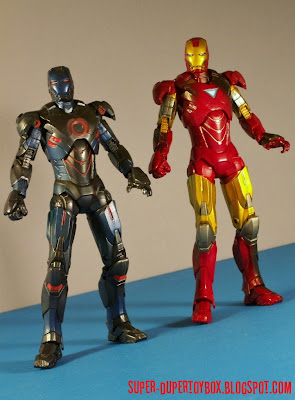 Yes, I already reviewed the Marvel Select Avengers Hulk, but can you have too many Hulks?  :D  There were plenty of unique characteristics to warrant buying this guy, and I was impressed with the surface texture in the sculpt, abundant with minutiae best appreciated firsthand. 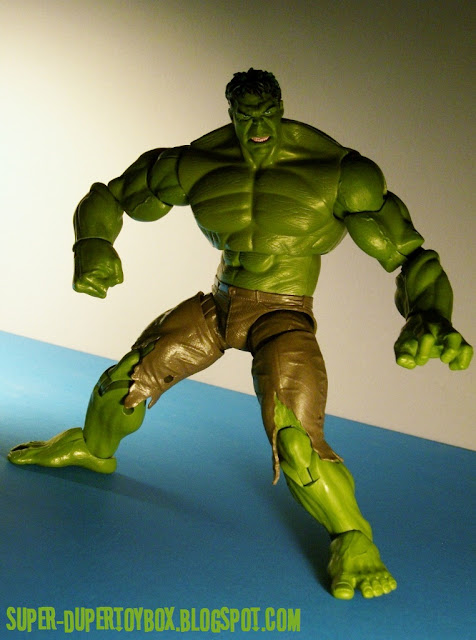 The torn pants at the knees come off better than the Marvel Select Avengers Hulk, Hasbro wisely leaving both knees exposed to make the transition from pants to skin smoother. the double-hinged elbows interupt the sculpt quite a bit more than the Marvel Select, and may be somewhat unnecessary, but I like that they left one of the hands open, and hinged the wrists to actually make that useful. Hasbro didn't give Hulk a hinged neck, but the ball-joint is pretty expressive and he's got those sweet new rocker joint ankles. 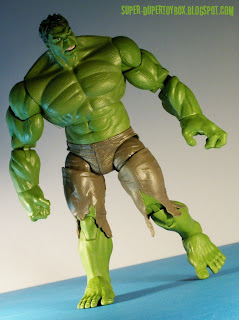 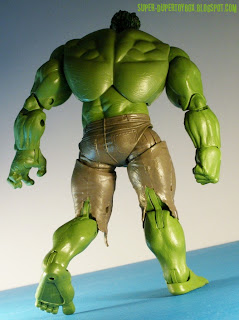 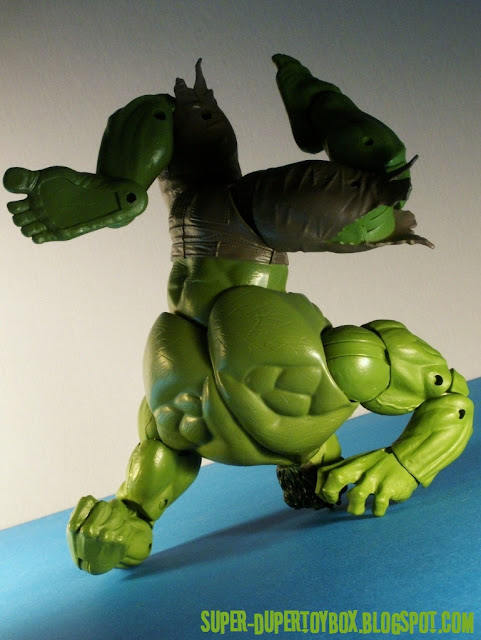 Hulk's face and green drybrushing in his black hair reminds me of my old Mego Hulk from childhood- this is a fun toy! He's very poseable and does a lot- I've been playing with him on my desk more than all the other Avengers! 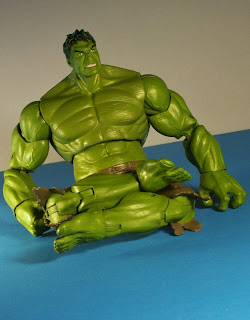 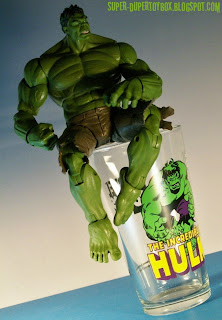 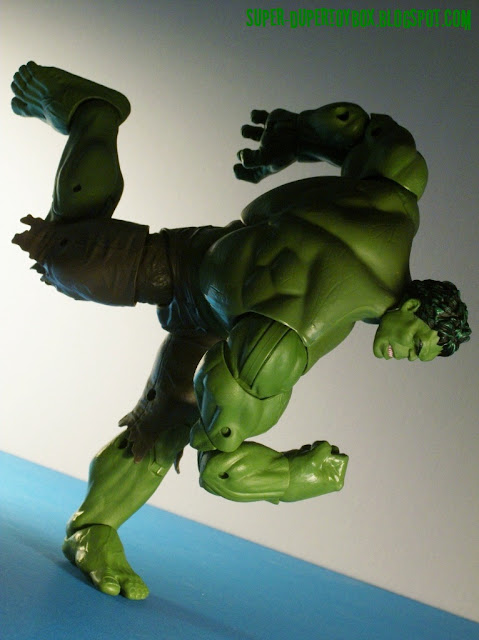 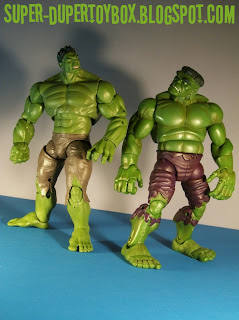 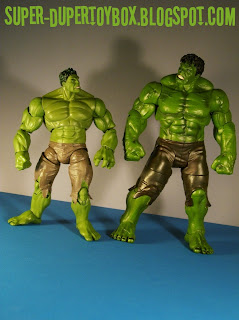 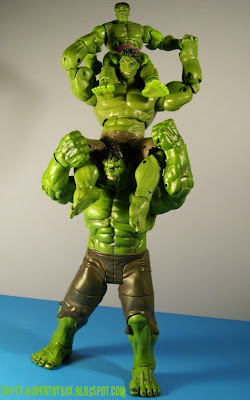 The obvious first comparison with the Hasbro Avengers Hulk would be the Marvel Select Avengers Hulk (upper left), who's quite a bit larger. The both have a lot going for them in the sculpt and articulation department, and while it's a tough choice the Select Hulk has better paint apps. His size is great too- the bigger the Hulk, the better. Essentially a Legends figure, comparison with my ToyBiz First Appearance Hulk (upper right) is also in order, one of my favorite action figures. There's articulation in the hands and a swivel waist in addition to the abdominal joint on the ToyBiz, as well as a hinge/ball combo on the neck, but he doesn't have double-jointed elbows. The toyBiz also has better paint apps throughout the body that the Hasbro, who has none really. I've said it before- the ToyBiz Hulk is hard to beat. But hey- there's always room in my collection for another Hulk, one of my childhood favorites! Below: Hasbro Avengers Hulk with the Marvel Select Avengers Hulk, ToyBiz Legends First Appearance Hulk, and 3 3/4" Marvel Universe Classic Avengers Hulk... 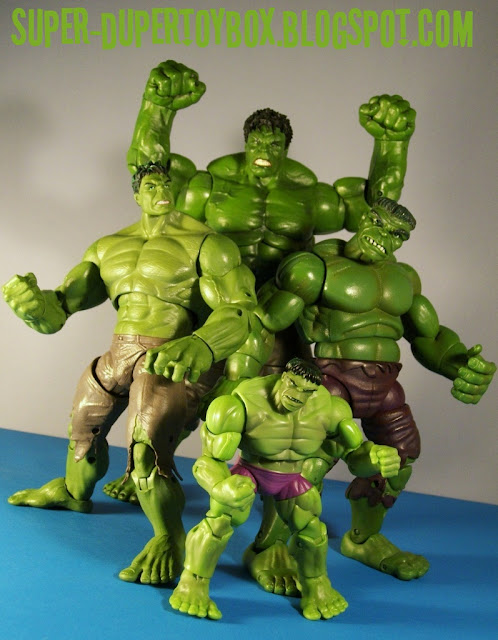 It seems the elemental and distrusting Hulk has tangled with all his Avenger teammates at one time or another, including Iron Man... 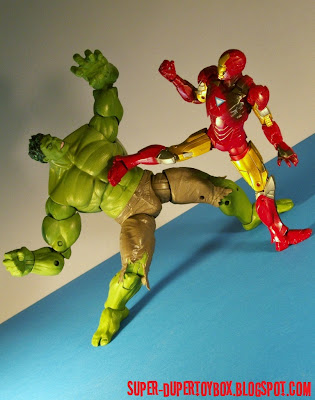 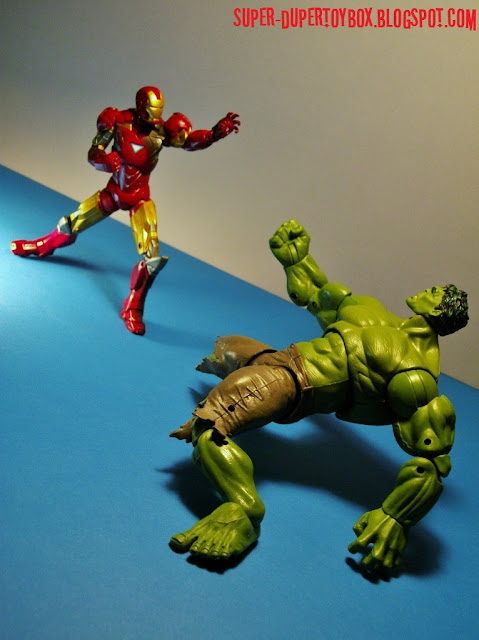 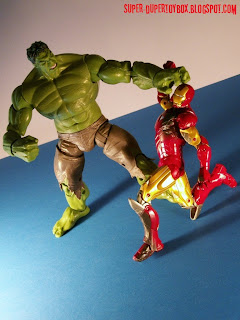 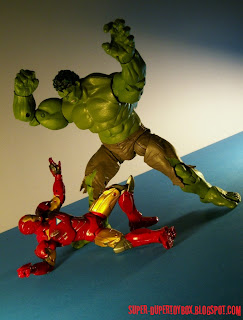 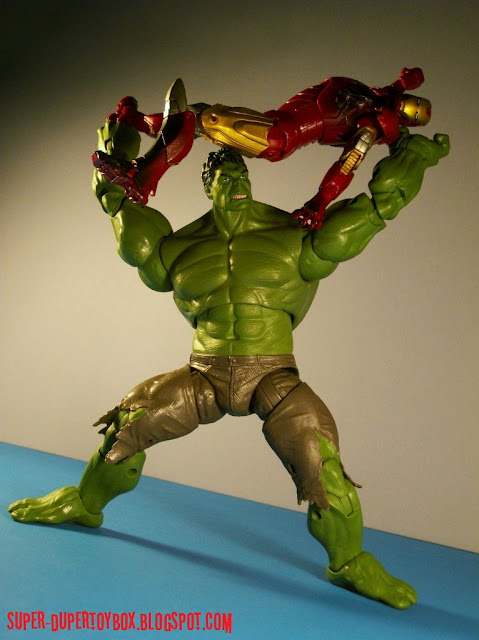