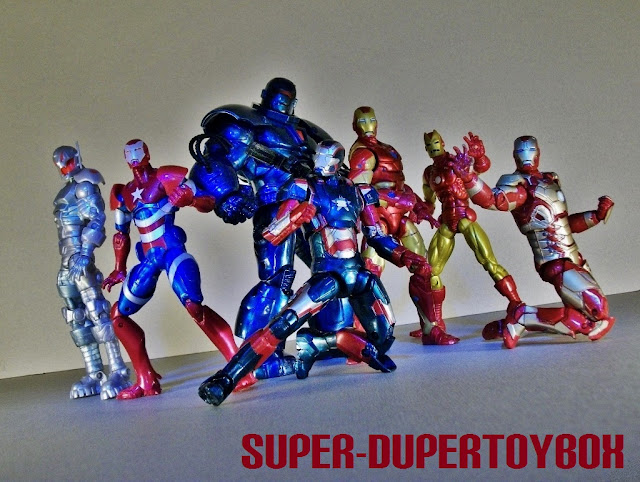 There was so much photography from my recent sessions with the Marvel Legends Iron Man 3, that I had to share some of it in this addendum post. Not only did I unexpectedly round up all the Iron Men  in this line to assemble my first BAF ever, the Iron Monger, but have picked up other 6" Iron Man & Iron Man 2 figures along the way. 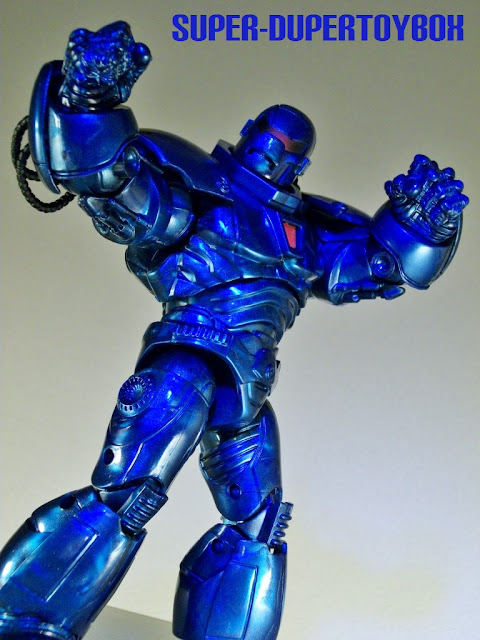 I've said before that I have a fascination with variant decos on figures and reimaginings of popular characters, such as in the case with blue Iron Men. First introduced as Tony Stark's Model X, Mark I "stealth armor", the black armor was heavily highlighted in blue to accommodate comic book styling, influencing the several blue Iron Man figures we've seen over the years. While red and yellow/gold are a recipe for success in hero costuming, I find the dark blue with red highlights contrasty and attractive. My new Iron Monger with Marvel Select Fusion Armor Iron Man and Legends Series Strike Stealth IV.... 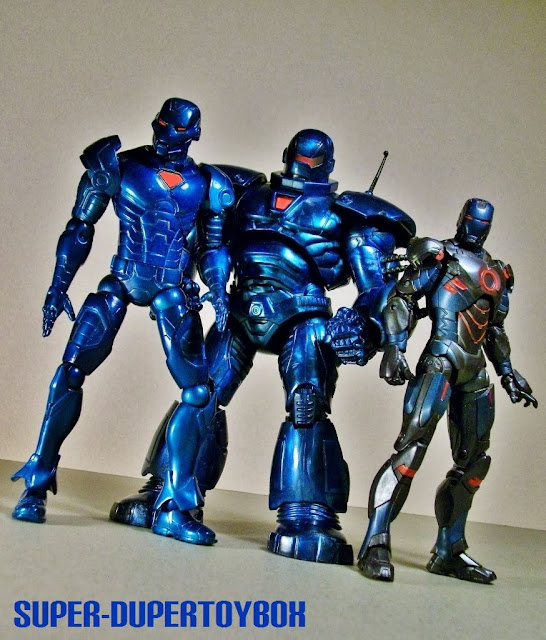 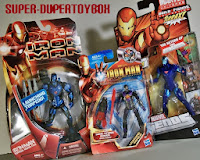 I also have the Marvel Legends Series Terrax Series Stealth variant I picked up well over a year ago, and more recently found a 6" Torpedo Armor Iron Man Series figure, as well as a 4" Iron Man Series Sonic Storm Iron Man. The latter is really purple and black, but he still fits in with my blue armory. Some day, I'll get them all together for a photo shoot... 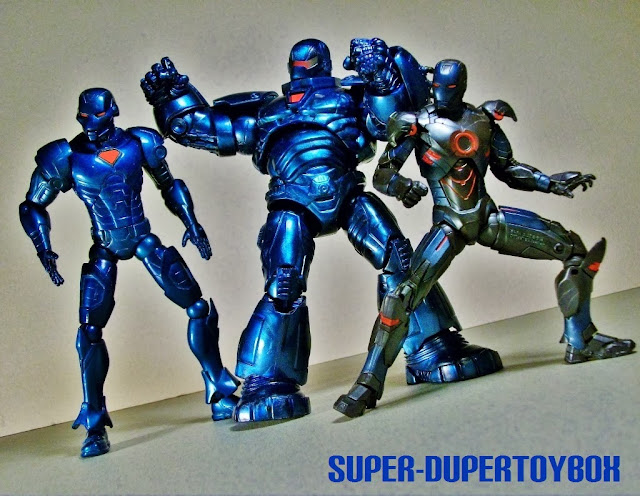 Picking up the classic Iron Man with interchangeable head was, of course, an excellent chance to play BIG TOY/little toy with my 4" Iron Man 2 classic Proto Armor Iron Man and Model III, Mark I Iron Man... 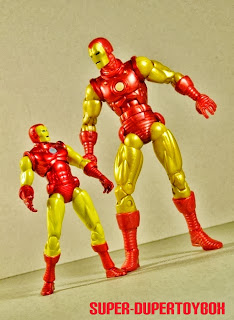 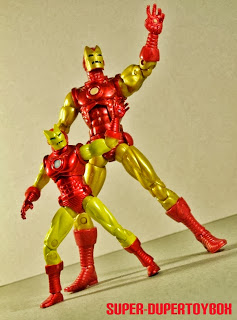 Iron Man has seen many reincarnations in his popular red & gold colors, including his Heroes Reborn armor, and Heroic Age "Bleeding Edge" armor... 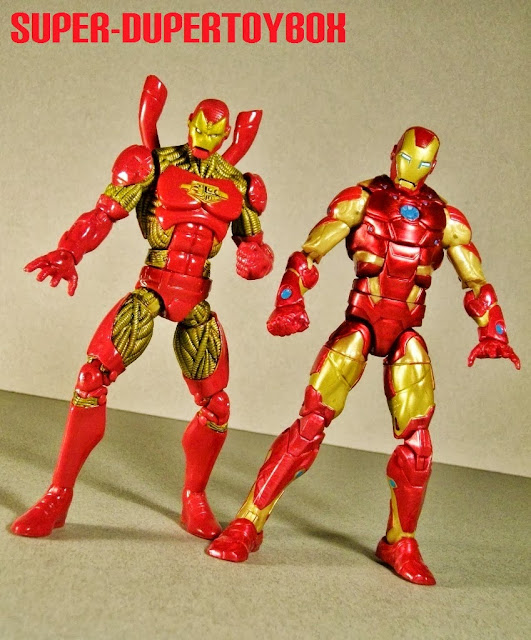 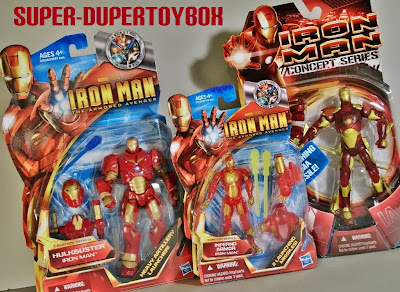 Similar to my obsession with blue Iron Men, any Iron Patriot inspired armor decos I find pleasing to the eye, so It's fun to have Lt. Colonel James Rhodes (movie Iron Patriot), and the Marvel comics Norman Osborn Iron Patriot on hand for comparison... 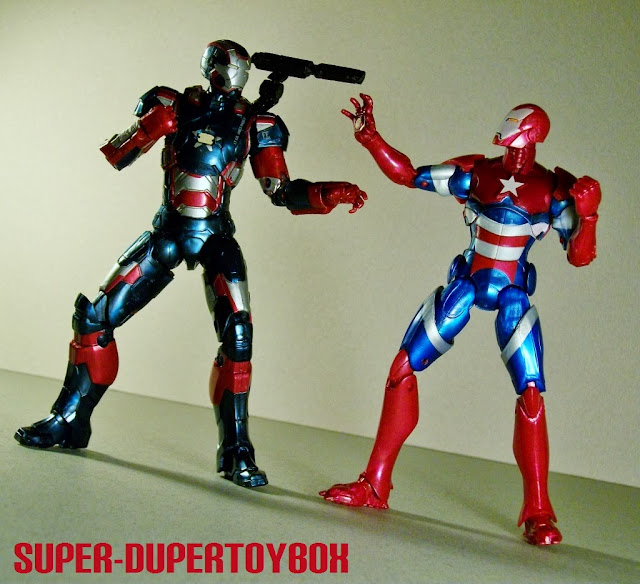 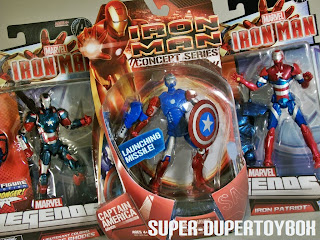 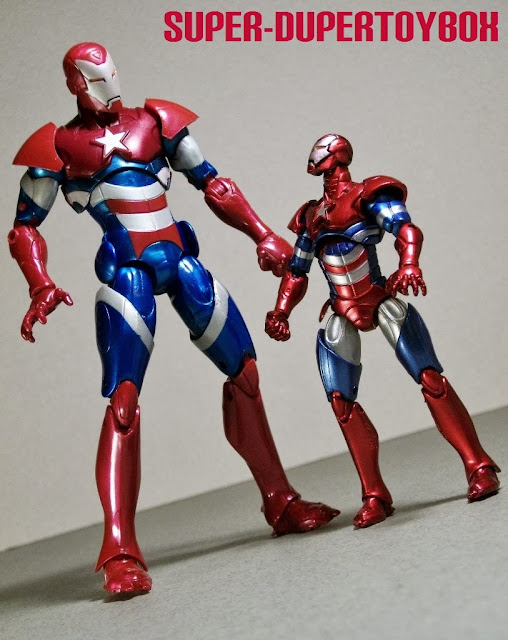 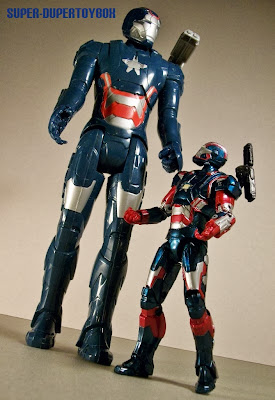 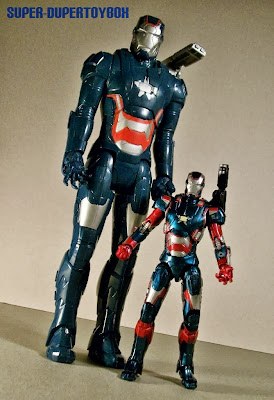 Pictured below is the Wal-Mart exclusive 6" Avengers Series Mark VI  with my Iron Man 3 Mark 42 Iron Man. The popular motion picture franchise starring Robert Downey Jr. as Tony Stark gave the character a renaissance, and updated his armor styling. The Mark 42 Iron Man has updated Hasbro articulation, but there's no denying what great action figures came out of those Iron Man 2 molds... 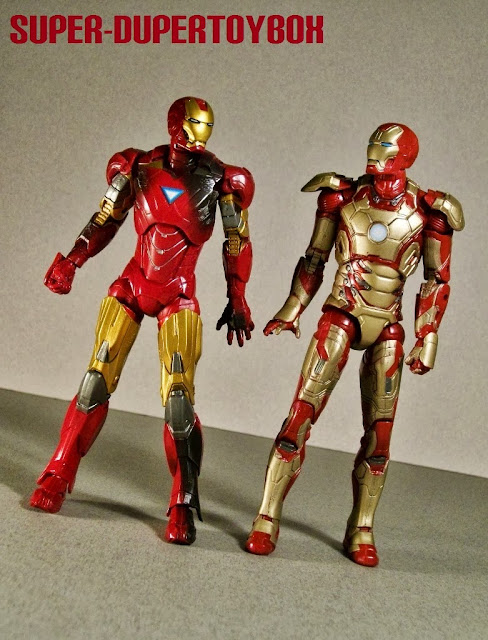 While I don't own one of the 6" Titanium Man figures from which Ultron's body was based, I do have the 4" version with similar styling, notably in his waffle-stomper feet. I picked up several of these 4" Iron Man 2 figures a couple years ago, and they were really nice sculpts with great articulation, unlike some of the recent Hasbro offerings. 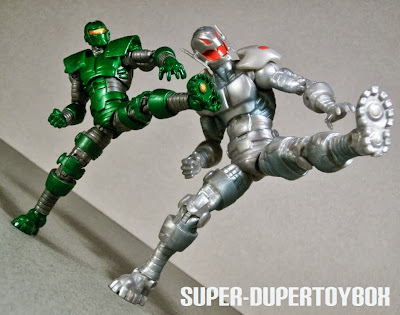 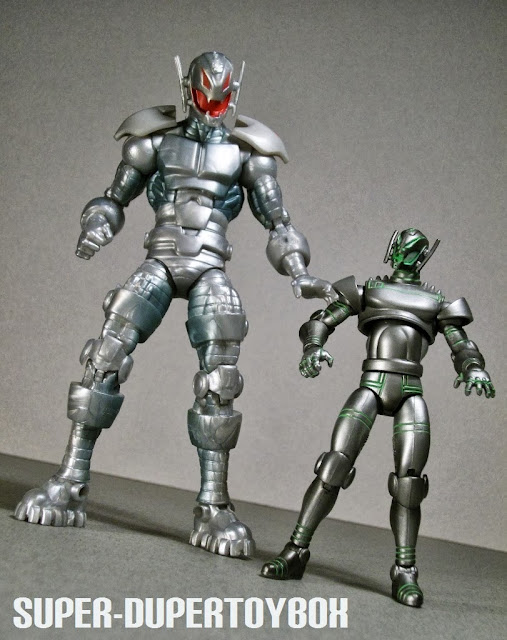 How many Iron Man figures could one man possibly want to collect, you may ask? Well, that's hard to determine- I found a new MiniMates Iron Man just last week, and if they released a 6" version of the black & gold armor seen in the recent Marvel NOW! Iron Man title, or the space armor from the new Guardians of the Galaxy title, I'd buy them for sure! Iron Man just lends himself well to an assortment of variants, based on a character possessing a wealth of specialized armor. The possibilities are endless! Visit the Iron Man Armory online! 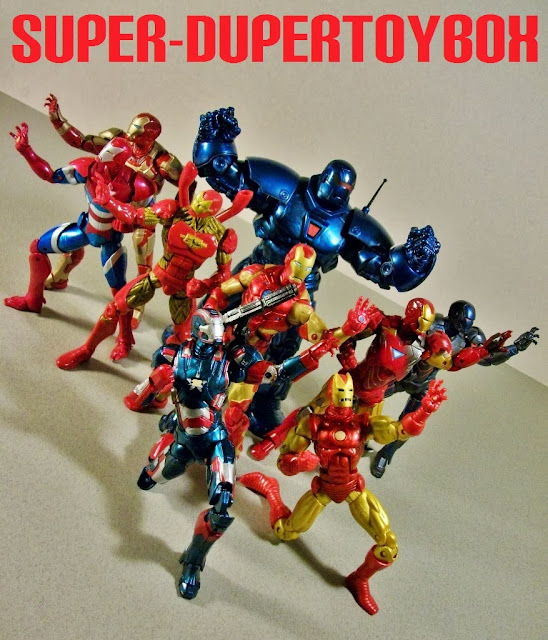