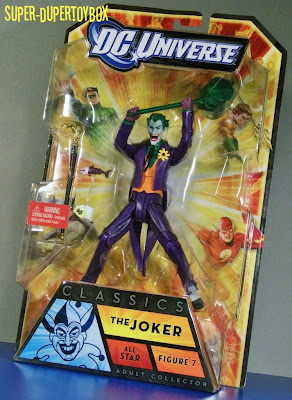 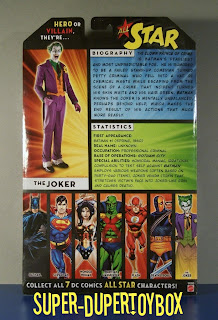 I bought this All-Star DC Universe Classics Joker off Amazon two years ago, and was waiting for the right time to open him. After picking up the Batman Unlimited Penguin reviewed in my last post, now seemed like the perfect time. These two characters are a couple of the oldest Batman foes, and are strongly associated in my mind, the connection due to my childhood memories of my Joker & Penguin Mego dolls, whom the DCUC versions share much in common (especially the Joker). I seem to remember their frequent pairing on those old Filmation Adventures of Batman, Scooby-Doo, and Super Friends episodes as well. The Joker is one of the all-time best villains of pop-culture and literature in my humble opinion, and don't recall experiencing a version of him I didn't like- there is so much there to work with. Now I can't say I have a favorite, but it would be hard not to blurt out Cesar Romero from the 60's TV serial. Grant Morrison's Arkham Asylum: A Serious House On Serious Earth (1989) also made a big impression on me as a teenager, the same year we saw Jack Nicholson's enthralling portrayal of the clown Prince of Crime on the silver screen. Dave McKean's artwork is amazing in this book, and his rendering of the Joker is particularly disturbing- a must-read for any fan of the character. 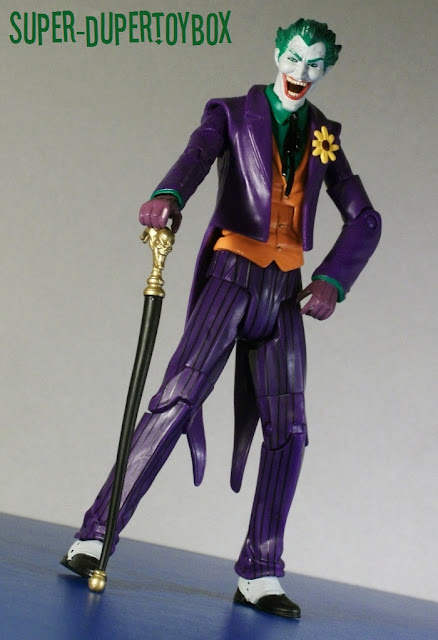 This action figure is a triumph, and a great example of why I've passed over so many of the new DCUCs Mattel has produced lately. Not only were we getting three accessories with this figure a couple years ago, but also got a figure stand- a generous packing we are no longer given by Mattel (and for $14.99). The cane alone is a work of art, with it's golden jester's head handle. He's visually stunning, save the ugly rectangle on his back- a vestigial remnant of a re-purposed mold. Otherwise the attention to detail in the sculpt is excellent, and paint is perfect, right down to the tiny gold buttons. He has that great DCUC articulation, though front-to-back movement in the legs is restricted by the sculpt, and there's no waist swivel. His head is on a swivel instead of a ball-joint, which is somewhat disappointing. His bicep and thigh swivels are helpful however, as are his abdominal and ankle hinges, as limited as they are. Joker stands easily without his base. 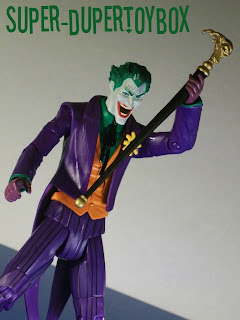 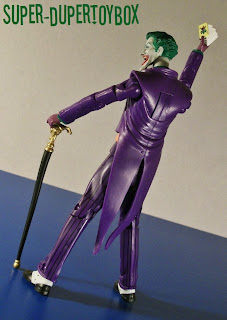 Joker's has a couple other accessories that weren't even necessary, but thoughtful: an impossibly tiny deck of cards and a laughing fish, the latter a reference to Detective Comics #475. Extras like this, combined with the minutiae of detail in the figure, this may be one of the most deluxe DCUCs ever produced by Mattel. The picture below is a great example, Joker's tongue painted in a high gloss, adding a creepy realism that takes the cake... !   &=D 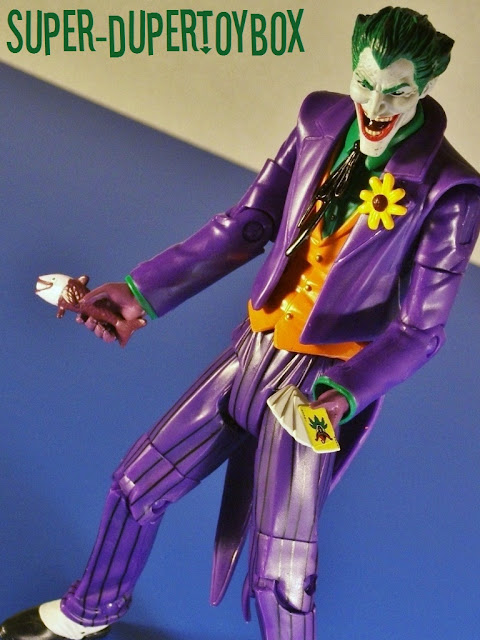 And finally Joker's mallet, the head complete with a jester's face, handle joined at the nose. This may be my favorite accessory, simply for the fun factor, I mean really....  &=D 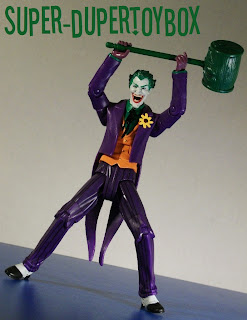 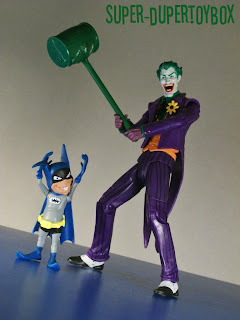 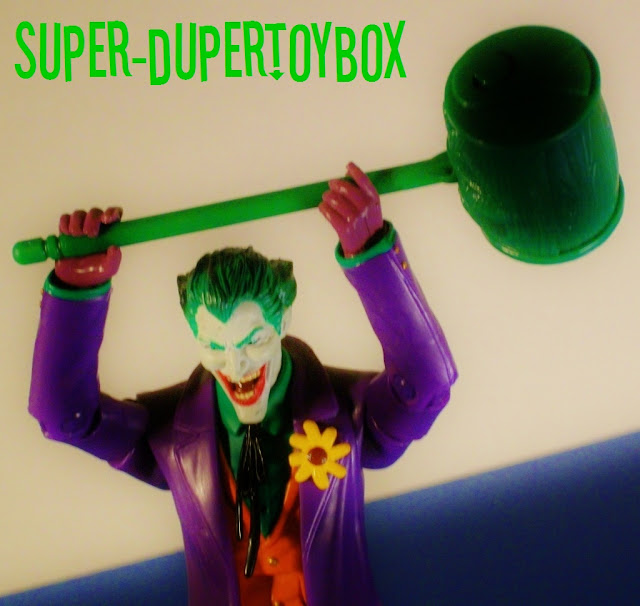 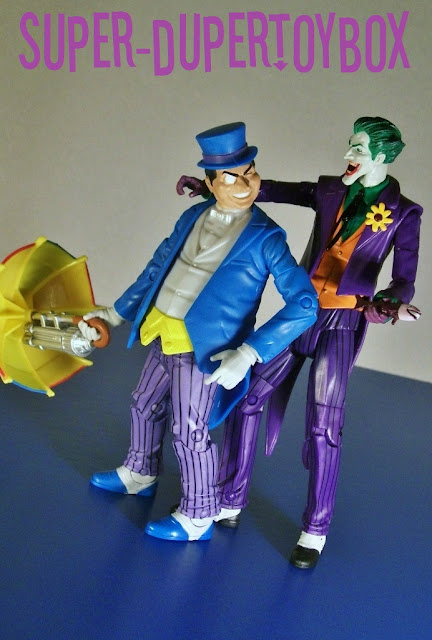 DC All-Star Joker with Batman Unlimited Penguin -what a pair! Joker was originally from the Wal-Mart Exclusive Wave 10, but re-released in 2011 as an "All-Star", as some of the other more popular DCUCs were. 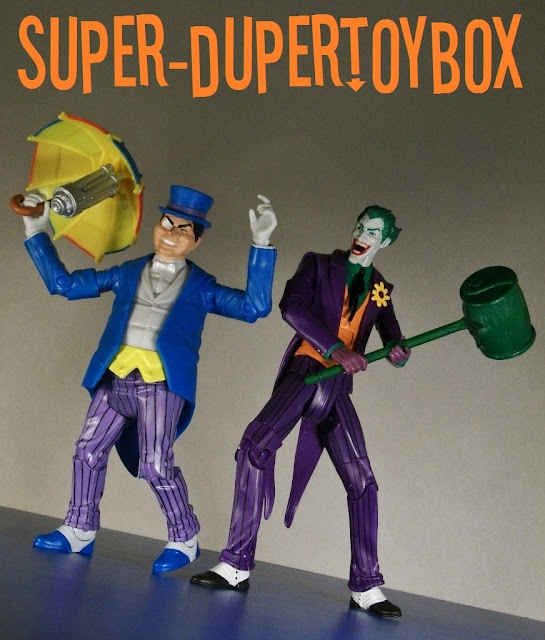 This post wouldn't be complete without a tousle with my Legacy Edition Golden Age Batman! Can the Caped Crusader take on Penguin and the Joker at once... ?! 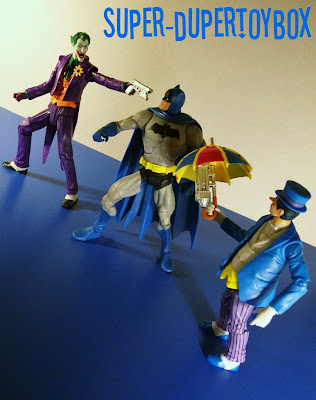 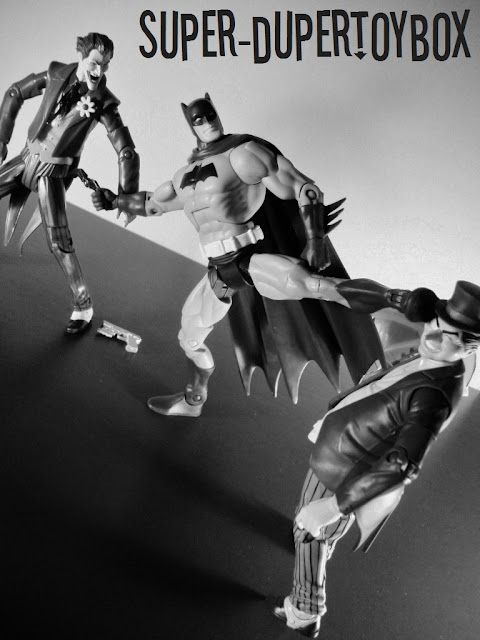 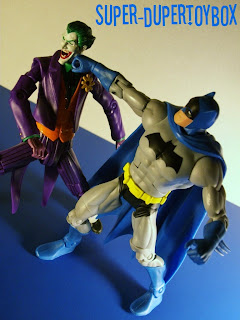 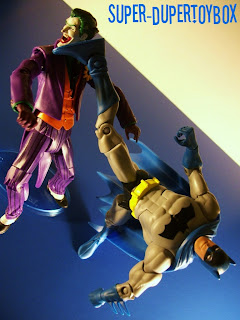 Ooo, the Joker gets his chops rocked by Bats again! It looks like it's back to Arkham Asylum for the insane Joker, and probably to Gotham County for Penguin! Thanks for reading!   &=D 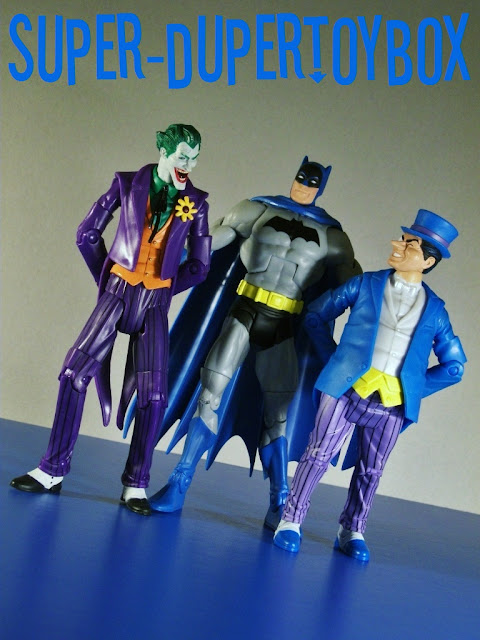 * Visual checklist & reviews of the DCUC line at DCClassics.Com!
More Later- Make It FUN!
Posted by Super-Duper ToyBox at 8:21 PM