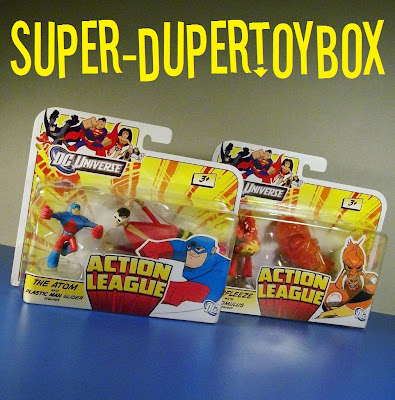 I've seen only one set of these new DC Action League figures in one dumpy K-Mart across the county- no where else. At $8.49 a pop, up from seven bucks when I first started collecting them, they had understandably lost my interest (ouch). These two were too cute to pass up however. The packaging has been updated, which I am quite fond of. The previous design, was fine mind you, but these have a likeness of the "main" character included across the front, warmer colors, and an even splashier, open feel. The character/characters are announced as part of a titled adventure, like in a comic or animated feature, with no further elaboration or explanation. In my opinion, Mattel/DC should include a mini-comic with these a package set, perhaps detailing Atom's escape with Plastic Man against "the Flying Creature of Doom",  especially if they are going to charge $8.50. 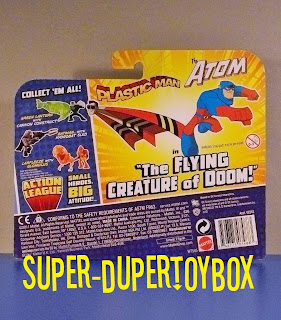 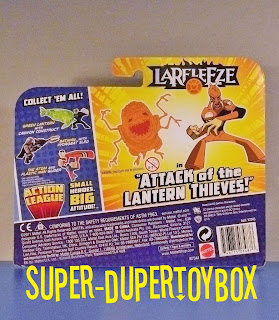 Mattel's corporate machinations aside, this Atom/Plastic Man 2-pack is a triumph! Plastic Man in form of a hand glider, his tiny partner latches tightly onto his arms to ride out and save the day. This set could not be more whimsical and fun! 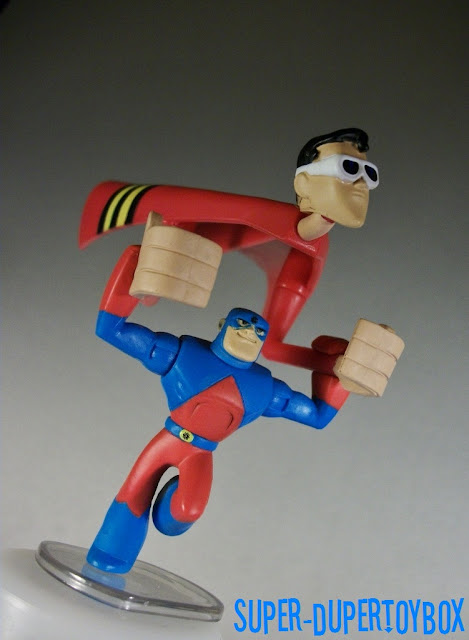 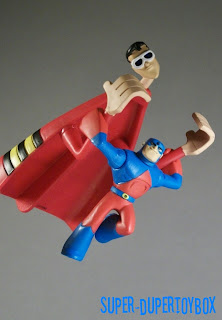 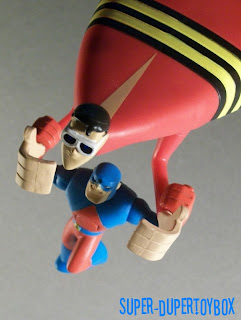 Plastic Man's arms move on a swivel at the shoulders, and his head is on a ball joint that also enjoys an added swivel at the neck, allowing him to look in almost any direction. I was pleasantly surprised by his expressive quality. His sculpt is simple but thoughtful, the bands at his waist actually incised into the sculpt, not just painted/tampographed onto the plastic. 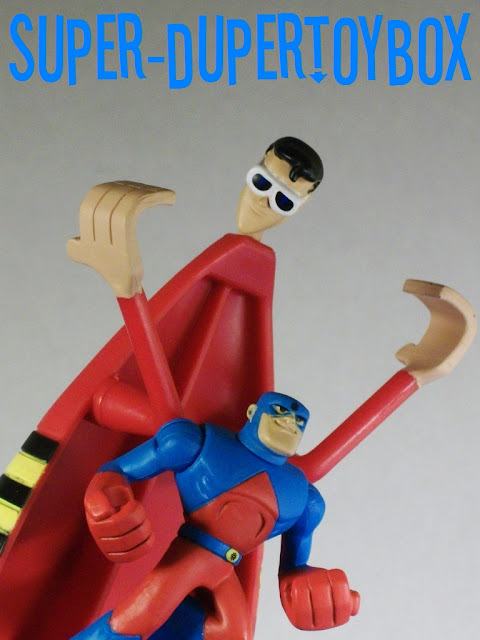 I've come to appreciate both Plastic Man and the Atom a lot more as an adult comics reader- they aren't marquee heroes in the DC Universe, but their function is important. Their powers are as unique as their personalities, the Atom bringing his fluency for sub-atomic science, and Plastic Man providing comic relief. 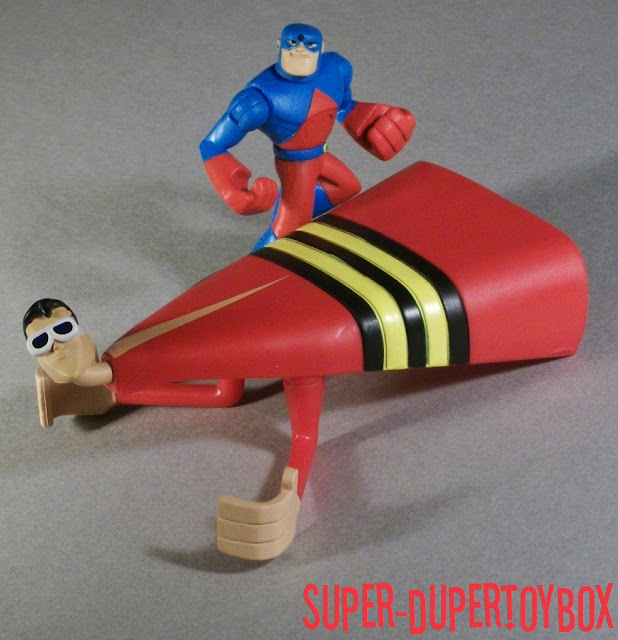 Atom enjoys hinges in his shoulders in addition to the swivel joints like some of the newer Action Leaguers have, which he need to hitch a ride with Plastic Man. Other than that, his neck and waist are the only other points of articulation- very simple. His buck is also smaller than the standard Action League male, which was thoughtful, and an atomic symbol is neatly tamped onto this forehead and tiny belt buckle. While these are atrociously overpriced, they are wonderfully designed and cuter than a bug's ear! Love! 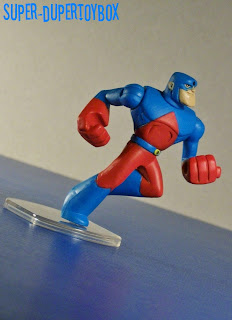 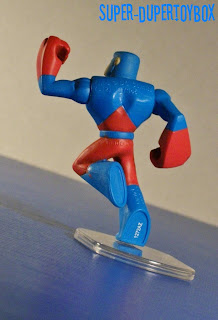 Atom has the dynamic running pose like the DC Action League Flash does, whom he pairs quite nicely with... 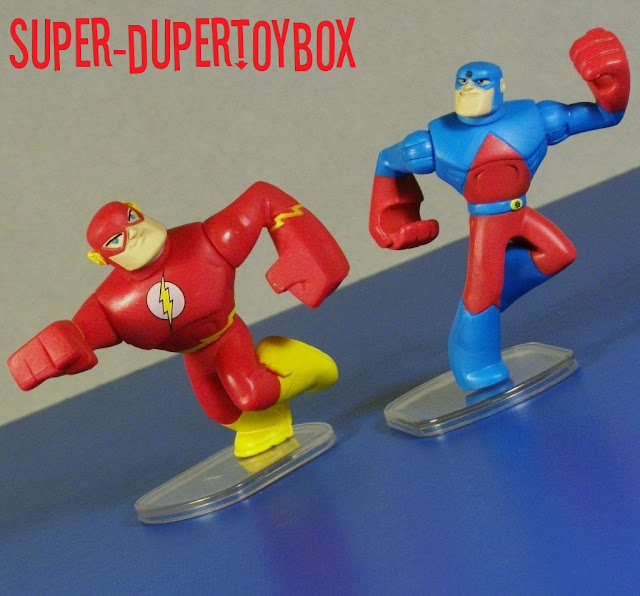 I have a couple other Atom figures, including this very cool Justice League Unlimited Atom. I love action figures with a fun, cartoony sculpt and color as much as those with a realistic treatment. Mattel's JLU line was a lot of fun... 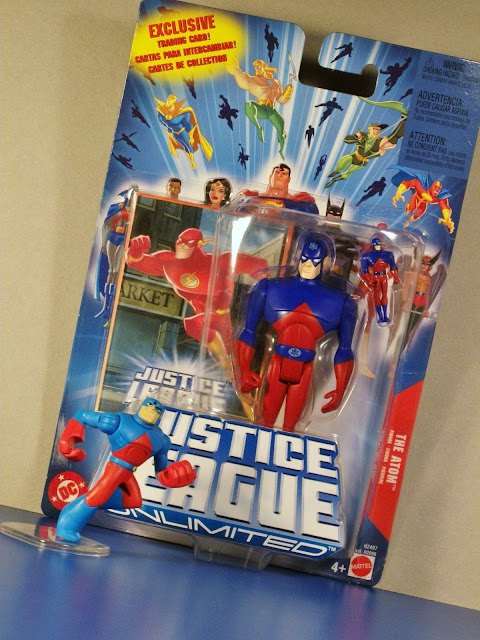 Larfleeze has a fun sculpt, clutching a small orange lantern to his chest. He doesn't have shoulder hinges like the Atom, so his insignia are not uninterrupted. He has neck and waist swivel, and a left elbow swivel that really adds to the lanky arm gesticulation his character is known for. Nice! And word to DC Direct: DC Action League Larfleeze has a neatly tamped lantern symbol on his tiny orange ring. 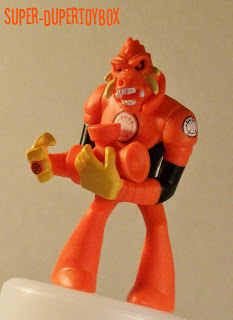 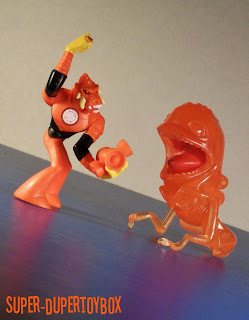 And though the holidays are behind us, I was reminded of the Larfleeze Christmas Special (Feb. 2011) in my collection when I started playing with him. Cheezy, but still fun  :D 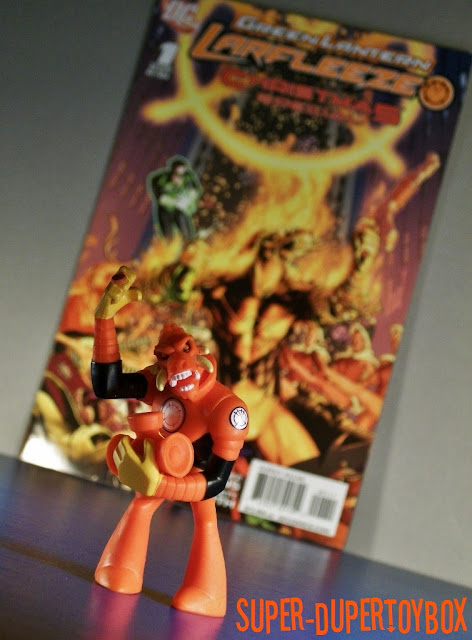 Larfleeze's 2-pack partner is Glomulus, one of Larfleeze's creepy bouncing minions that bring Slimer from Ghostbusters to mind. He's bigger than Larfleeze which is fine because of their elastic physicality, generated by the orange Lantern's energy. He has no articulation, made of an translucent orange plastic with rubbery arms. He has a, ummm... cavity in his posterior where Larfleeze can put his ringed fist. Hard to get him to stand this way, plus it's embarrassing  :D 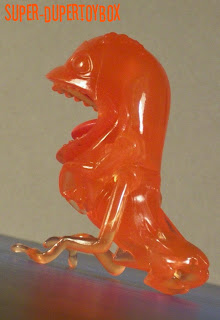 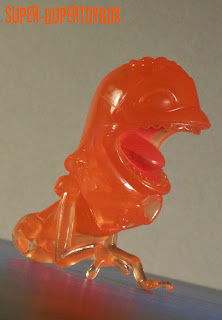 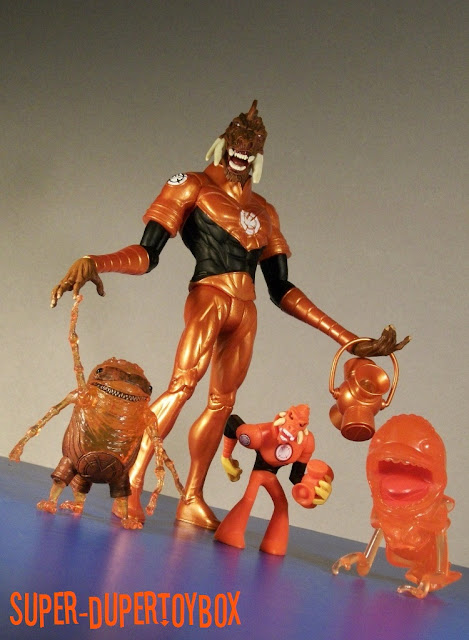 And finally, Larfleeze with the rest of my DC Action League Lanterns- see more of them at all these embedded links. Freshly back into comics as an adult around the time of Geoff John's Blackest Night story line, I became a huge Green Lantern fan, a character whose toys and books I now own a great deal of. 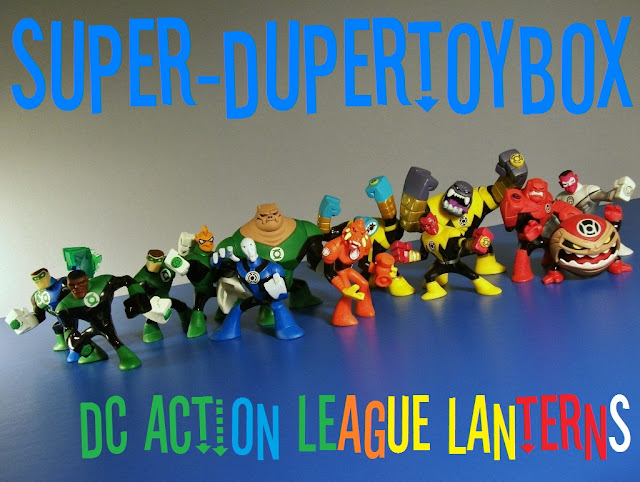