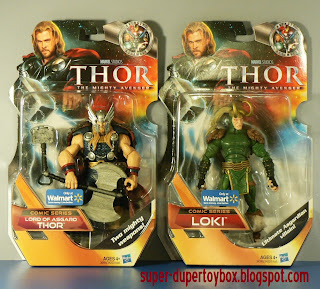 I guess these aren't labeled as "Marvel Legends" action figures, but they are the herald of the famed line's return. When I checked last week they had the Capt. America, Nick Fury, Movie Thof, & Loki, but not the Lord of Asgard Thor- the one I was really after. JBoy felt they were shortpacked, and I think he was correct, as upon my return I found only one on the peg.  And if they are shortpacked, that they are Wal-Mart exclusives as well makes him even more of a find- that said, I've seen him in Legends packaging online (Blob BAF Series- 2007), but am unsure exactly when that's gonna drop, and the colors didn't look this good. I wasn't going to buy Loki unless I found the Lord of Asgard, but I got lucky! 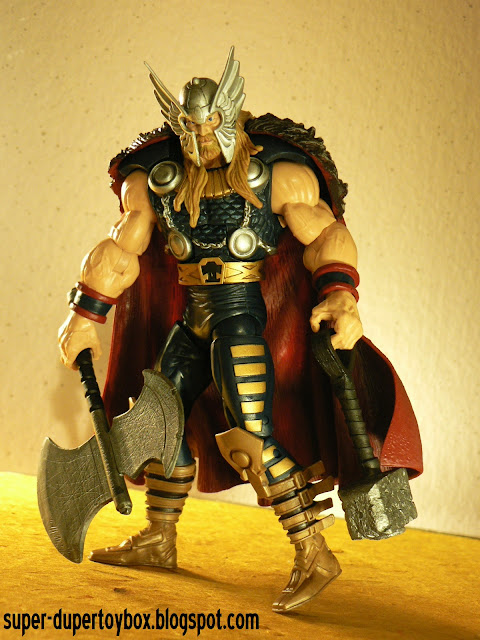 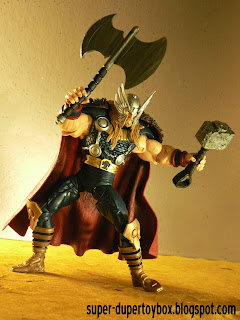 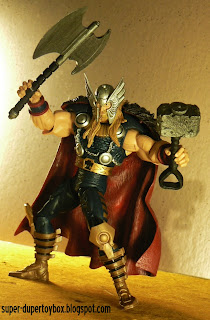 This figure is modeled after the Thunder God's depiction in the Thor: Lord of Asgard storyline, where in the wake of Odin's heroic self-sacrifice, Thor is called upon to fulfill his father's legacy as lord and master of the Eternal Realm. While I've not yet read this, this supercharged version of Thor would appeal to any fan of the Norse hero! I mean, just look at him....  Damn! The exaggerated sculpt and dark colors look great on this guy. I'm a big fan of the helmet and ribbed boots, and his oversized battle axe and Mjolnir hammer are nicely detailed as well. 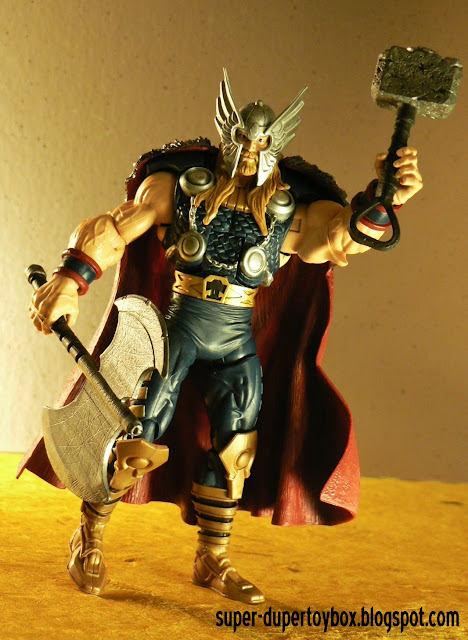 Thor is bulky, hence his articulation is pretty limited: his shoulder armor gets in the way of any over-the-head action, and his long hair keep his head in mostly one position. He has an abdominal crunch joint, but it doesn't do anything really acrobatic. Due to the bulge of his biceps, Thor can't do much of a curl, and when the forearm is brought in, a protruding tab of plastic is exposed at the elbow, unattractively separated from the remaining arm sculpt. Not so great there. His waist moves 360 degrees, as do his hands & feet, both of which feature a hinge as well. The double-jointed knees on mine were really cranky, but the swivels at the the top of his thighs were easily rotated. He kinda leans forward & down due to the weight of that huge cape and head placement, the latter of which I mentioned previously having being limited because of his molded, golden locks. 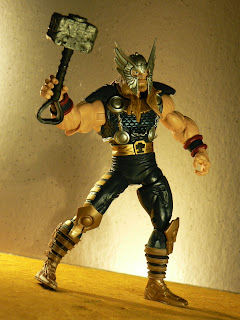 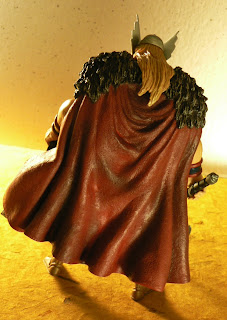 While on the subject, Thor's removeable cape is really something- it has a heavy fabric surface texture, "fur-lined" sculpted collar, and is nicely shaded. If removed, one can see the peg holes where it attaches to his shoulders- not a problem for me as I'll display him robed, though I had perpetual issues getting the thing back on to stay, a problem I had with some of the 3 3/4" movie Thor figures as well. I seem to have it reattached pretty securely now. 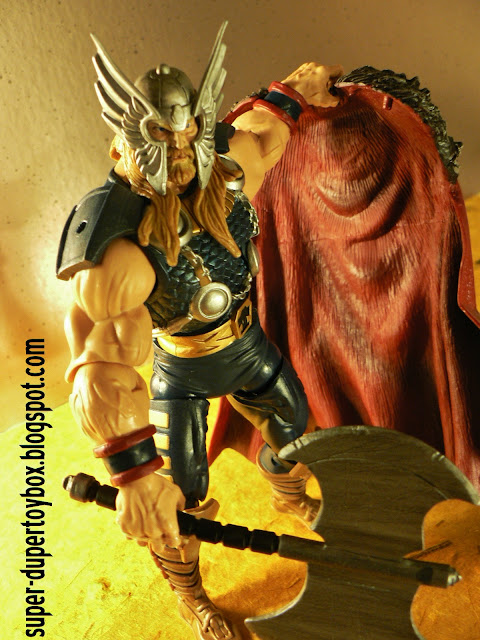 Lord of Asgard Thor and my Savage Frost Giant both have a lot in common really: they are both large, have an abdominal crunch joint, include a detailed accessory axe, and have sculpted fur on their outfit... 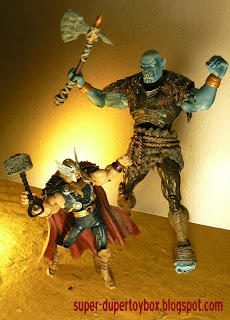 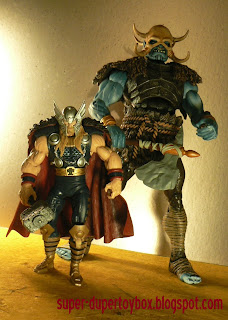 In spite of my critical eye, I proclaim this action figure BITCHIN': the colors, paint and sculpt are really cool. I love the helmet! I also like dig the details in his strapped boots, which are mimicked in raised, gold rectangles up the sides of his thighs. The belt has some nice detail, as does the chest armor, which has a subtle metallic paint application on the chain mail. He has his problems, which include distribution, somewhat plastic-y skin tone on his arms, and stiff neck, but at fifteen bucks he's a good value. 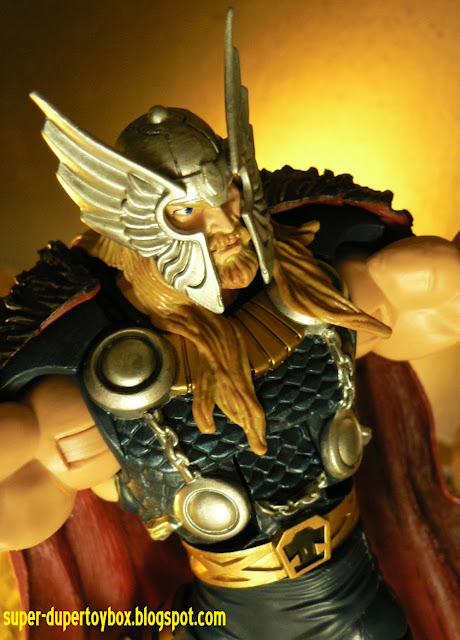 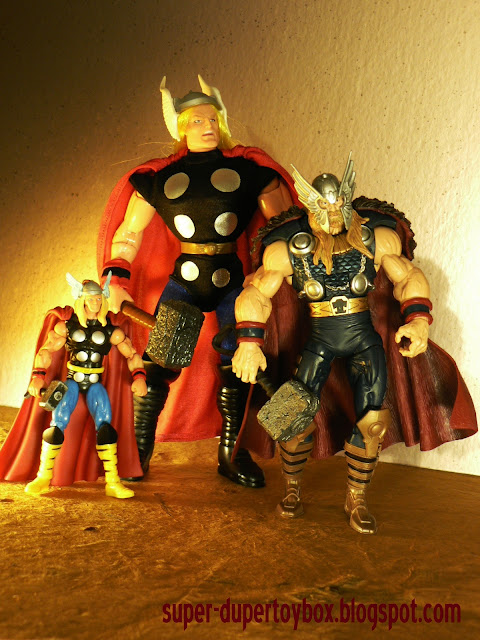 As tough as the competition was with his half-brother, this comic series Loki holds his own with a great sculpt and color. Like Thor, his shoulder joints are restricted by sculpted fur, though Loki has double-jointed elbows and his hinged wrists aren't hindered by wristbands, making his hands more expressive. His body, legs, & feet appear to be reused from an earlier Legends Doc Sampson I have, the scuplt of his t-shirt collar remaining. His abdominal joint is superior to Thor's, being a ball-hinge/swivel combo as opposed to one big hinge. While Thor enjoys a cut waist joint, Loki doesn't need one with the more expressive abdominal joint. 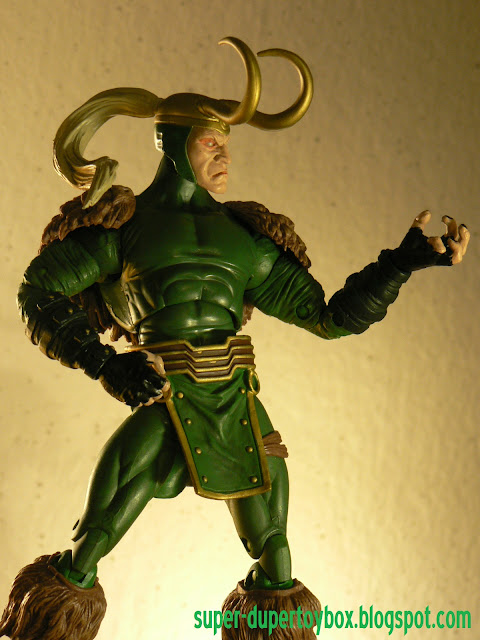 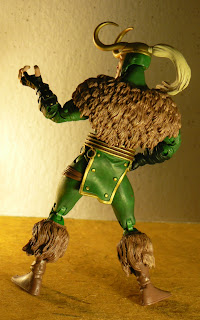 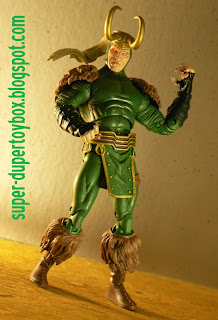 Loki lacks the detail that Thor's torso is decorated with, but the gold brads in his gauntlets & loincloth offset his plain body, which has a dark wash that's subtle. His left leg strap around the thigh would have been appreciated more thoroughly if Hasbro would've included a sheathed sword or dagger! 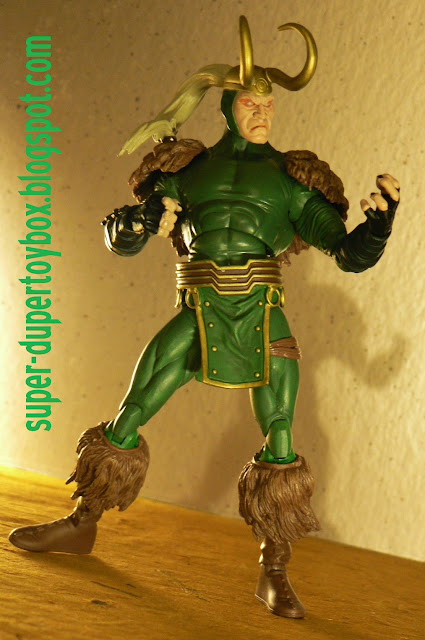 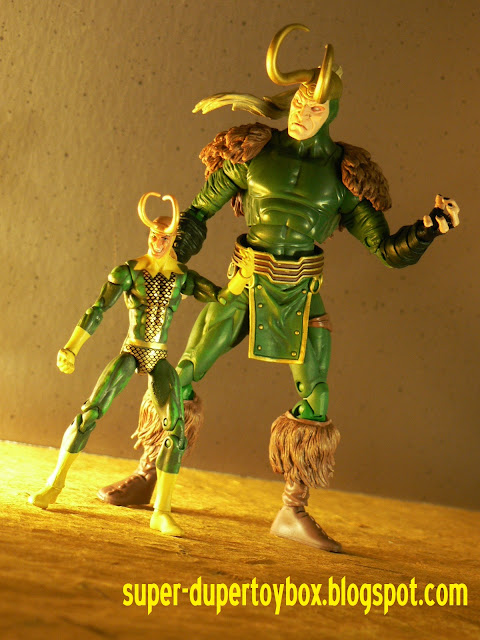 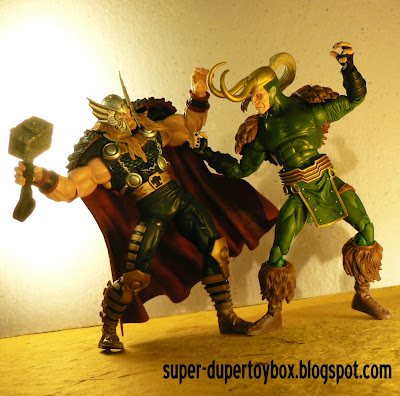 These two make a fun pair! I don't have a ton of Marvel Legends figures, like I do Mattel DCUCs, which I generally consider superior. I've read people more experienced claiming the earlier ToyBiz Legends were better than when Hasbro took over the line. I have some unopened ToyBiz Legends, but only a couple I've opened- one being my First Appearance Hulk. If I had to judge only by him, I'd say that is true- his articulation is incredible, as are his looks. That said, Thor & Loki are cool, and that Hulk is just an amazing action figure & tough competition for any who stand beside him. Below: Daredevil, First Appearance Spider-Man, First Appearance Hulk, Doc Sampson, Black Bolt, Lord of Asgard Thor, & comic series Loki (all are Hasbro, save Hulk & Spidey). 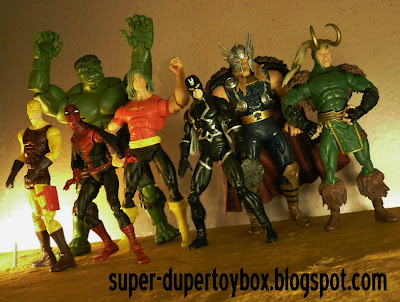 *See MarvelLegends.Net for the Legends visual checklist!
More Later- Make It FUN!
Posted by Super-Duper ToyBox at 12:55 AM