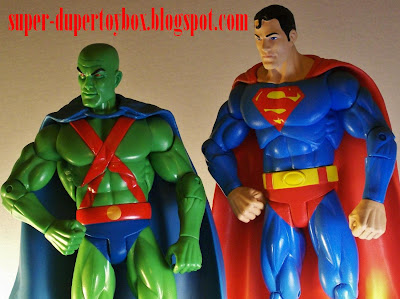 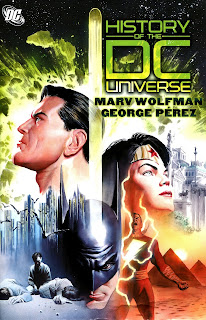 Like a lot of DC Direct figures, these are based on art from a specific story or artist, in this case the great George Pérez. Published in 1985 to coincide with DC's 50th anniversary, Crisis on Infinite Earths and the following History of the DC Universe book were a testament to Pérez's incredible talent, featuring every single character DC owned.  Marv Wolfman radically restructured the DC Universe's continuity in Crisis, and though planned as an epilogue to be included in that very book, History was published separately in 1986 to summarize the DC Universe's "new history", or continuity. Crisis on Infinite Earths was a lot of fun, but I found History to be hubristic and pointless. Planned to have included more characters than any DC Direct line ever, featuring characters from a variety of teams and eras as well as some renegade solo characters, DC Direct discontinued after only 4 waves/16 figures. 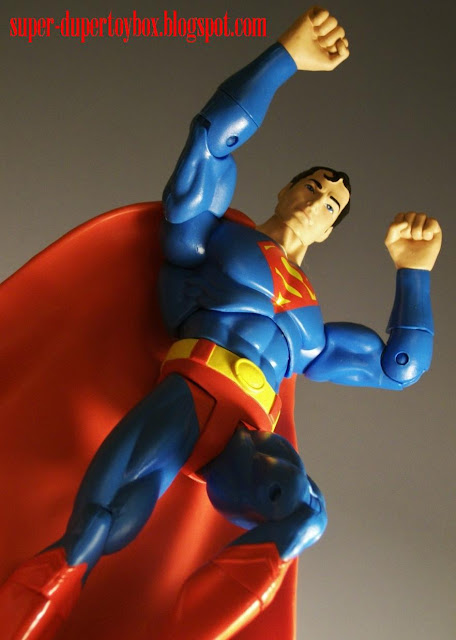 You probably recognize this Superman from the banner I've been using at the top of the Super-DuperToyBox blog. One of my favorite Superman figures, his bright colors and styling remind me of Chris Reeve quite a bit- the Superman of my childhood. Visually, this is fits my ideal expectations for the Man of Steel: the classic insignia on his chest, repeated in yellow on the back of his long flowing, red cape, blue eyes and spit curl perfectly coiled above his brow, and twin peak boot tops. He reminds me a lot of the Mattel Chris Reeve Superman I bought awhile back. This is the Bronze Age Superman of the 70's and 80's. The gloss of the plastic without any shading, washes, or drybrushing will turn some people off- it looks like a toy, and I kinda like that about these  :) 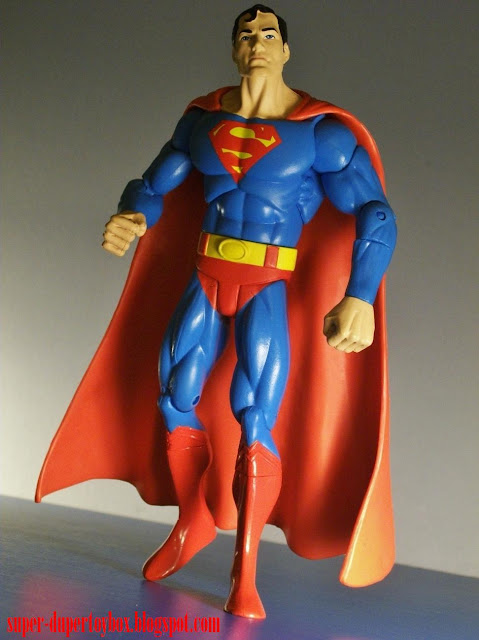 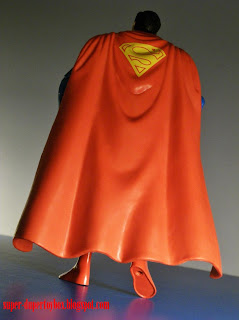 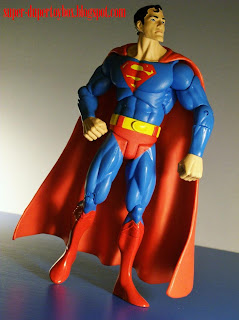 While the Capt. Atom & Black Lightning from this line had limited poseability, the caped figures have a really hard time standing due to the weight of their capes. Yes, they came with a non-descript, black disc base, but Superman here gets little support from it. When this line of figures was produced in 2009, DC Direct had begun to add points of articulation, but non of it functioned well- in Supes case, it doesn't even help him stand better. The cut forearms & shins don't do anything radical, needing ankles to assist the latter, and the swivel chest that barely moves is somewhat of a mystery- it doesn't ruin the figure for me, but it seems pointless. He has a great ball-jointed head however, adding a lot of personality, and the cut waist joint on these is a welcome addition. 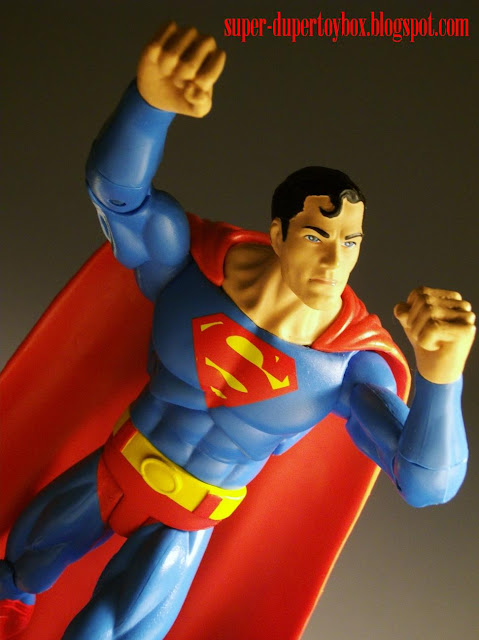 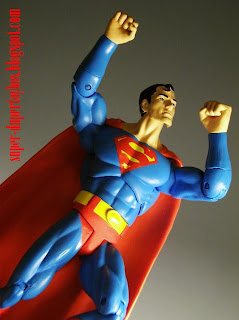 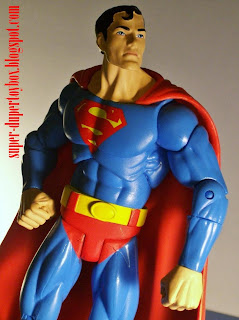 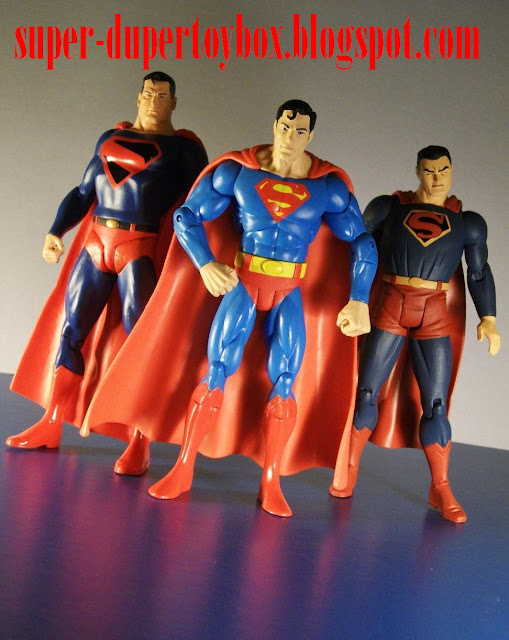 While this Martian Manhunter doesn't look like George Pérez's heavy browed version, he's pretty cool and aesthetically unique among my collection. I'd be willing to bet that head is from some previous Lex Luthor character. If you have read this blog for any amount of time, you know my enthusiasm for the Justice League's other alien, J'onn J'onnz. You've seen this figure in several posts of mine, including but not limited to: The Stranger, More Martian Literature! , and Martian Nativity.  I'm fascinated with this alien who came to Earth, finding it's tragic inhabitants endearing and worth protecting, sometimes from themselves. 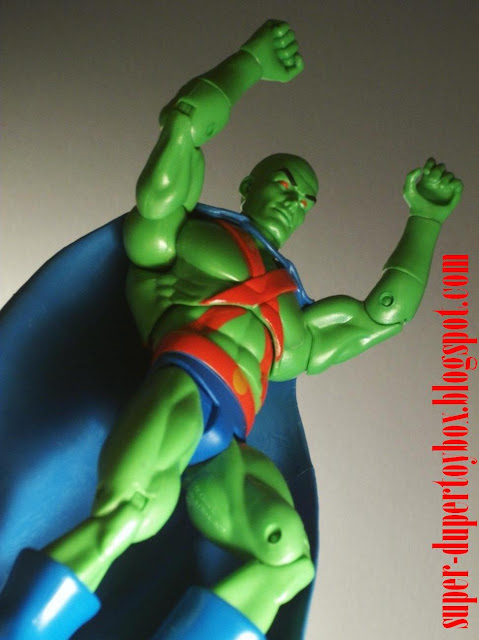 The wierd and nearly useless swivel chest/abdomen joint disturbs J'onn's deco on the abdomen, where it goes from sculpted chest harness to only painted across his obliques. Kinda weird, but not terrible a couple steps back. Oddly, he didn't get any kind of sculpt on the belt buckle like Supeman, but the paint application is clean. His boots swivel at the top, which is less distracting than Superman's cut joints at the shins. Missing is J'onn's trademark, and often exaggerated high collar. I wonder if this disappointed fans upon his release, but to me he's just another variant among the many Martian Manhunters I own, who look largely similar. I'm prone to appreciation of a reimagined character. 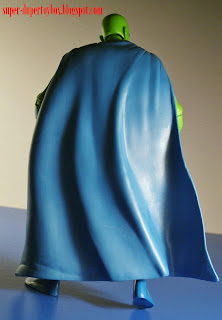 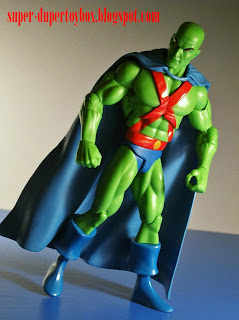 Like Superman above, Martian Manhunter had upright issues. You must either give them something to support their weight, or hunch them over grotesquely with their non-descript, black disc base pegged to the hole in their right heel. Somewhat unfortunate. Sure, I was able to get them to stand for this photo session, but I'm a pro  :D   Feel free to try this at home, they're fun! 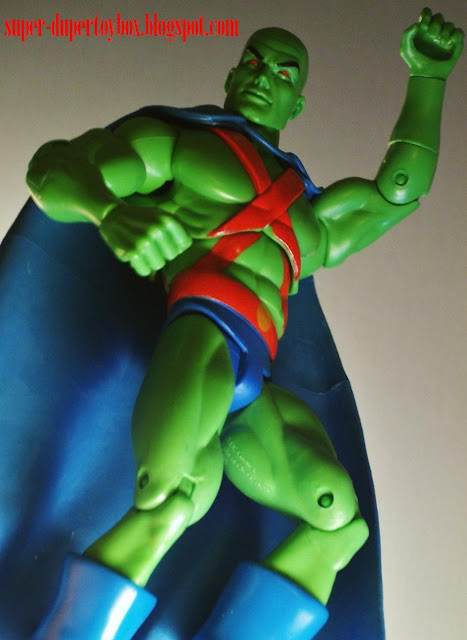 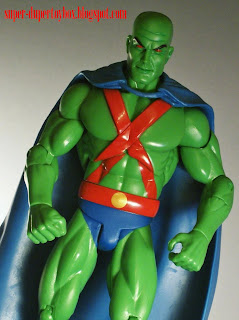 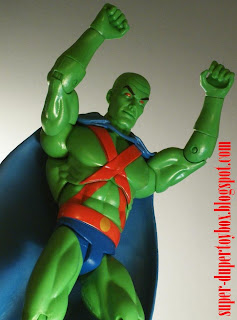 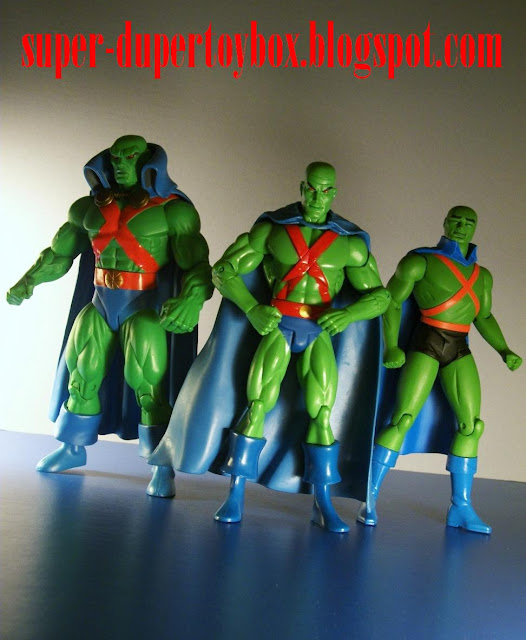 What a cool pair of DC Heavyweights these two make, perhaps the most powerful of them all! 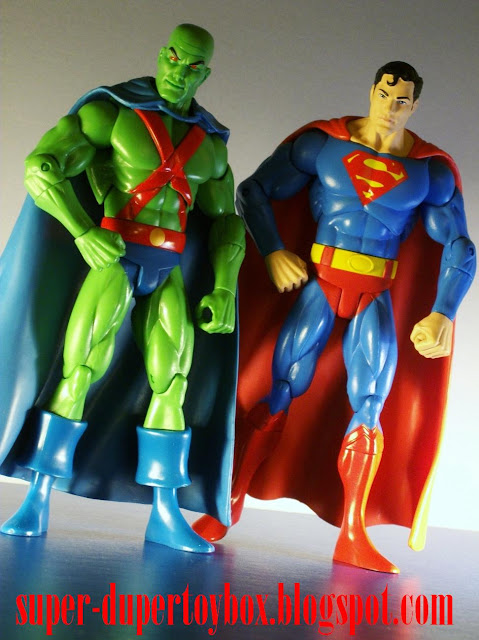